Uncertainty is everything to The Man Who Wasn’t There; the Coen Brothers at least spell that much out in the text. Otherwise, you’re on your own when it comes to pinning down what is probably their least-recognised picture. There’s good reason for that status; one might even construe it as intentional, that their deadpan, indifferent narrator/ protagonist should be reflected in the audience’s response. I hadn’t been inclined to revisit it since it came out on DVD, and I find myself recalling the same degree of measured respect; it’s curious, studiously idiosyncratic and full of detail, but diligently unaffecting.

Indeed, one might argue this is their take on The Usual Suspects but intentionally interiorised and dramatically paralysed; there’s incident here, but it’s always constrained by its protagonist’s non-committal, unfazed response; it’s almost as if the brothers thought Bryan Singer’s movie was a cop out in its reveal, hence their big joke in-kind. If you don’t really know what’s going on, how can any of it hope to matter to you?

One can find various readings and discussions of the picture’s themes and characters – Is Ed Crane (Billy Bob Thornton) an actual alien?; Is Ed Crane a repressed homosexual?; Is unrepressed homosexual Creighton Tolliver (Jon Polito) a scam artist or genuine?; What are the UFOs about?; What was the nature of Ed’s intentions towards Birdy (Scarlett Johansson)? – but the best one can really conclude in each and every case comes back to the defence case outlined by Freddy Riedenschneider (Tony Shalhoub) – a great Coens name – when he attests “The more you look, the less you really know. It’s a fact, a true fact. In a way, it’s the only fact there is”.

Ed: Yeah, I guess I’m sorry about the people I caused pain. But I don’t regret anything. Not a thing.

One conclusion that would be fair is that Ed is a sociopath, since his tone, manner and responses to any given situation suggest someone lacking basic empathy or interest in others. Unless Ed’s entire authorial voice is an invention, that is, right down to his assertion he was asked to write about what it was going to be like to die; his experience of the chair is obviously a projection, and he offers the curious qualification of his account that “They’re paying me 5 cents a word so you’ll pardon me if sometimes I’ve told you more than you wanted to know”. Since he’ll be dead and has no dependents – Frank (Michael Badalucco) is hardly like to want any cash, if his actual fate reflects the one Ed has told – there can be no reason to include more words than necessary. And given the men’s magazine he’s writing for, it’s hardly likely such luridly sensational publications are going to care much whether a death-row account is from someone authentically on death row.

But let’s assume Ed Crane is on death row. The movie repeatedly alludes to plot details potentially being made up. We see Ed reading LIFE magazine in the barber shop, specifically articles Dry Cleaning: The Wave of the Future and The Mysteries of Roswell: New Mexico. Sure, Tolliver could be coincidentally selling dry cleaning as the wave of the future in town at around the same time (we see this during Doris Crane’s – Frances McDormand – trial). But put that next to the house call paid by Ann Nirdlinger Brewster (Katherine Browitz), telling Ed she knows it wasn’t Doris who killed Big Dave Brewster (James Gandolfini) on account of the aliens, and it does seem a bit like someone is casting around for inspiration in order to inflate their word count.

Ann: There was a spacecraft. I saw the creatures. They led Big Dave onto the craft. He never told anyone what they did… this thing goes deep, Ed. It goes deep and it involves the government. This was not your wife.

On the desk in the cell where Ed is writing, we see an assortment of literature – see also the office paraphernalia Verbal Kint is sourcing for inspiration see while recounting his tale to Agent Kujan – including Unheard-Of magazine offering more UFO tales. Stalwart boasts the headline “After 10 years of married life… I discovered I am an escaped lunatic!” while Salute offers “Why Vet Marriages Fail”. Is Ed the escaped lunatic? Is Big Dave the vet whose marriage failed (albeit it was cut short)? The account Ed gives is of someone who told everybody he was a war hero yet sat out the war in a clerical capacity in a Navy shipyard in San Diego (had it been a Philadelphia shipyard, one might have construed more connective tissue to his abduction while camping in Eugene, Oregon).

Big Dave: When we finally up and bust off the beach we found Arnie Bragg, kid missing on recon; the Japs had eaten the sonofabitch, if you’ll pardon the, uh… And this was a scrawny, pimply kid too, nothin’ to write home about. I mean, I never would’ve, ya know, so what do I say, honey? When I don’t like dinner, what do I say? I say, “Jesus, honey, Arnie Bragg – again”?

That Dave is fond of fabrication might be conflated with Ed’s fondness for fabrication, and Dave’s morbid jokes about cannibalism might be the product of a fertile, sociopathic mind (such as Ed’s) that may have considered such a thing and certainly wouldn’t shudder at it, any more than stabbing someone in the neck, or understanding that making overtures towards a minor – even if only as a “Svengali” type – are highly inappropriate, or having no religious convictions ( “Doris wasn’t big on divine worship”; he only goes to church to accompany her to bingo).

Indeed, add in that Ed is a barber (Sweeny Todd) and that the first thing we see is a hypnotic barber’s pole. Historically, the Red indicated a barber was prepared to bleed patients, White: set bones pull teeth, and Blue: shave if nothing more urgent. Consider also that Ed is capable of killing with impunity, grooming minors, references secret government activities – “Sometimes knowledge is a curse, Ed” – and has no ability to makes sense of his life (“Writing has helped me sort it all out”), and it is perhaps no wonder he rather bewilderedly ends up in the electric chair. Has he been MKUltra’d? It would make his lawyer’s defence apposite, that “I was too ordinary to be the criminal mastermind the DA made me out to be, how there was some greater scheme at work that the state had yet to unravel”.

The argument that Ed is gay is a mostly coherent one, citing such contributing details as Doris having done the proposing to Ed, their having no kids, his indifference to her affair, his “house eunuch” role in terms of attending to her (dressing her, shaving her legs) and the reflection of the shaving of his legs in the electric chair, his rejection of Birdy offering fellatio; his profession (“I used to regret being a barber”); he sat out the war with “fallen arches”. With the scenes of Tolliver coming on to him (“Was that a pass? Well, you’re out of line, Mister”), the Coens are clearly making something out there, but lines like the refrain “What kind of man are you?” are pointing more to Ed’s essential (existential, quote above) unknowability than his sexuality.

His confession “My wife and I hadn’t performed the sex act in many years” tells us much about their relationship, but so does Ann’s “Big Dave, he never touched me again” after he was abducted (are they one and the same?). His response to Birdy’s overtures could as well be seen as sincere – he’s genuinely moved by her music, he has no designs on a minor, and his pants “tent” is, per the Coen Brothers, not an erection – or yet more obfuscation; are we really to believe he yelled “Heavens to Betsy, Birdy!” as the car careered off the road, and that it was her, rather than him who had the sexual designs? Further still, we come back to who he’s writing his words for. May be it’s Muscle Power. Maybe he, per the Coens, is lacing a gay subtext in his elaborate tale entirely for the benefit of the readers of “men’s” magazines. “Because the more you look, the less you know.”

Ed: He said I was modern man.
Reidenschneider: He is your reflection.

In among the various influences the Coens cited – Camus’ The Stranger, James M Cain – was Shadow of a Doubt, which of course features that memorable scene where Joseph Cotten describes is disgust with women. There’s something of that, mixed with something almost Lynchian in Ed’s stated desire to “mingle hair with common house dirt”; the reasoning goes back to hair and plants and soil (and connected to the soul), but it has a somewhat grotesque, alchemical texture as expressed, of someone who fails to perceive something fundamental (“This hair – you ever wonder about it? It just keeps growing”). If he’s the modern man, it’s because society is intent on breeding sociopaths.

Reidenschneider: They got this guy, in Germany. Fritz Something-or-other. Or is it? Maybe it’s Werner. Anyway, he’s got this theory, you wanna test something, you know, scientifically – how the planets go round the sun, what sunspots are made of, why the water comes out of the tap – well, you gotta look at it. But sometimes you look at it, your looking changes it. Ya can’t know the reality of what happened, or what would’ve happened if you hadn’t-a stuck in your own goddamn schnozz. So there is no “What happened?” Not in any sense that we can grasp, with our puny minds. Because our minds… our minds get in the way. Looking at something changes it. They call it the “Uncertainty Principle”. Sure, it sounds screwy, but even Einstein says the guy’s on to something.

The Heisenberg theme is, on a broader level, pointing to the doubt over everything we are told. Indeed, it’s the principle prong of deducibility to Shaloub’s case: “Science. Perception. Reality. Doubt. Reasonable doubt”. We’re offered direct contrast of this with the fed facts – certainties – of Ed’s brother-in-law, along similar lines to sunspots, and planetary motion and taps – “Can you believe the Russians exploded an A-bomb, and there’s not a damn thing we can do about it?” – but betraying that he actually knows nothing. Which is why, when he’s faced with things that are unfathomable, he falls apart. Most people – certainly barbers – are more like him, hence Ed’s replacement (“For all I know, he talked to himself on the way home”).

Reidenschneider: One may at first look at these lines and see only the chaos of a work of modern art.

You can see a similar mechanism in Thornton’s delivery that would be used to conversely uproarious effect in Bad Santa a couple of years later. Everyone here is on great form, including Johansson, who has increasingly become a facsimile as her star has risen (post-Marvel, basically). There are those who will tell you The Man Who Wasn’t There is the Coens’ greatest work, their unsung masterpiece, but that’s probably true of every one of their movies. Well okay, perhaps not Ladykillers. I can’t agree, unless there’s a perverse rise to be gleaned from its pernicious remoteness and distancing. It’s a movie to be obligingly fascinated by, but not to love. I’m not buying any of that modern man stuff. 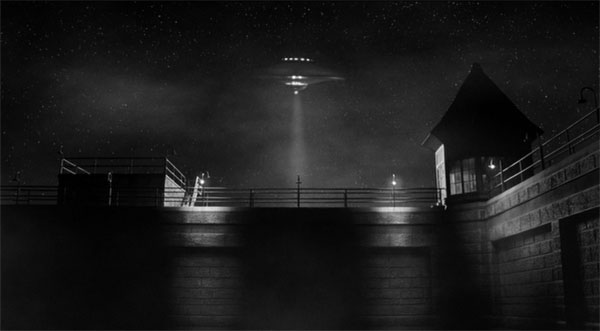