You say the word, and we’ll stop this yokel dead in his tracks.

The key to Capra of this period is triumph over cynicism. And yet, quantifying exactly where that places one, in respect of the prevailing doctrine of the era, isn’t quite so straightforward. Mr. Deeds appears to ally itself, loosely but coherently, with the values of FDR’s New Deal, yet Capra was a staunch Republican who “fumed over what he saw as an encroachment on his own wealth by the social and economic policies of the New Deal”. While the answer may be as simple as Deeds’ actions being at the volition of the individual over the government, some have argued the picture is symptomatic of the increasing difficulties Capra encountered in couching his values against the political realities gathering around him. Hence the final repose, whereby it is love that rouses Deeds from his stupor, rather than righteous indignation.

As an earnest tonic, Mr. Deeds goes down relatively easily. Gary Cooper never descends into the kind of over-emotiveness that was James Stewart’s corner, such that Deeds is straightforwardly honest and true yet convincingly sharp beneath it (contrast with The Pride of the Yankees, where he has trouble playing an actual dim-watt). Likewise, Jean Arthur – who’d appropriately return for Mr. Smith Goes to Washington, since it was originally conceived as Mr. Deeds Goes to Washington – seamlessly treads the path from cynical journalist out for a story to besotted love interest (less seamless is their final clinch/kiss, where you get the strong impression they’re both longing for Capra to yell cut).

And the support is good too, with Lionel “Max” Stander as dyed-in-the-wool cynic Cornelius Cobb, wowed by his boss being every-bit genuine (and wowed the more when he’s genuine with his fists). Douglass Drumbrille brings the villainy as John Cedar, conspicuously failing to persuade inheritor Deeds to sign the same PoA his uncle did and thus enable his law firm to continue obfuscating the books with regard to their reliance on unconditional access.

There are hiccups here, where the mix becomes too syrupy for my tastes; the farmer who comes in with a gun, raging at Deeds that he should do something for the little men – which propels Deeds into action, not that he needed a change of heart anyway – overdoes things rather. But Capra has a sure formula, from Deeds’ responses to luxury (throwing echoes in his hallway and telling Raymond Walburn’s butler Walter to get off his knees), to the buttoned-down insanity hearing, where the pressure mounts until Deeds finally deigns to defend himself.

You can see Capra’s very particular outlook in such scenes, not only in terms of what he’s saying regarding politics, but also regarding the new pillars of the system; particular scorn is reserved for the “scientific” opinion of eminent Austrian psychiatrist Dr Meilie von Haller (Gustav von Seyffertitz), pronouncing Deeds a manic depressive before being mercilessly mocked for his own lack of insight (per Deeds’ analysis of thinking modes, whereby Haller is characterised as a “doodler”; it seems the movie was, along with “pixilated”, largely responsible for two words entering the lexicon).

The hearing also finds Cedar setting out his objections to Deeds’ proposed course of giving away his fortune (to deserving farmers, judiciously vetted first). It’s here we may find the distinctions between Capra’s ethic and FDR’s… well, ethic would be giving Cedar too much credit. Cedar is, of course, thoroughly unscrupulous, so anything he says is couched in terms of the preservation of himself and Cedar, Cedar, Cedar and Budington. Nevertheless, there’s only one discernible difference between the actions he highlights as acceptable (the New Deal of the government) and those initiated by Deeds:

In these times, with the country incapacitated by economic ailments and endangered with an undercurrent of social unrest, the promulgation of such a weird, fantastic and impractical plan, as contemplated by the defendant, is capable of fomenting a disturbance from which the country may not soon recover. It is our duty to stop it! Our government is fully aware of its difficulty. It can pull itself out of this economic rut, without the insistence of Mr. Deeds or any other crackpot! His attempted action must therefore be attributed to a diseased mind, afflicted with hallucinations of grandeur and obsessed with an insane desire to become a public benefactor.

What is Deeds proposing? For others, nothing. Except that his generosity is bypassing the place of the government and, therefore posing a threat to the government’s – or FDR’s – backers. This, presumably, is why he also pleads: “If this man is permitted to carry out his plan, repercussions will be felt that will rock the foundation of our entire governmental system!” Everything about the New Deal was, after all, emphasising the indispensability of state. Left or Right, or variations in between, the state is designed (in basic Hegelian terms) to be indispensable.

As noted, Capra – if we are to assume what we’re told about him was the case, and certainly, his films dodisplay certain contradictory impulses that would appear to back this up – was a Republican; he voted that way throughout the ’30s and ’40s, largely because of FDR’s attacks on the wealthy. Mr. Deeds reputedly led to the Soviets hailing Capra as “a comrade, a world improver, a Red propagandist”; this is the man who would become an FBI informer during the McCarthy hearings and admired Mussolini, Franco and Nixon. Yet Capra and FDR both had populism in common. The desire to improve the lives of the working class (especially the agriculture sector): “both men sought to champion the cause of the common man”.

While FDR may appear with a rosy glow at first glance, someone intent on helping the American people and who believed the US government was owned by a financial elite, Antony Sutton had him pegged as an elitist Wall Street tool, a man who came from Wall Street families and was financially backed by Wall Street: “The policies implemented by the Roosevelt regime were precisely those required by the world of international finance”. FDR was a creation of Wall Street, and an integral part of the New York banking fraternity. Whether Capra, whose rebuffing of cynicism suggests one both awake yet also dreaming an impossible dream, was aware of the management behind the scenes is doubtful, but he certainly seemed to be standing at odds with any such system.

The New Deal found the Democratic Party – soon to be intrinsically and perversely identified with Hollywood values, given the latter’s placement as a stronghold of wealthy elites – initiating “corporate socialism”. Far from anathema, this appeals to big business because it “avoids the rigours and the imposed efficiency of a market system”. It allows them to thrive via “business control or influence in regulatory agencies and the police power of the state”. Such a coordinating structure makes for an effective way to assume a monopoly and “a legal monopoly always leads to wealth”.

While it may seem like a stake through the heart of free trade, the key is who benefits and “the difference between a corporate state monopoly and a socialist state monopoly is essentially only the identity of the group controlling the power structure”. Which, if it is being done “right” should only be a nominal difference. Key to Sutton’s analysis is the old favourite of Hegelianism, in this case the myth of the struggle between capitalists and communists; it was all gravy to Rockefeller, for example. As such, the National Recovery Administration represented construction of economic systems where the few could profit at the expense of the many, under the guise: “Let society go to work for Wall Street”. Identified in this mix was the potential for a coup against FDR (because, while those at the very top of the pyramid may understand how it all works, those performing their designated tasks should remain blissfully unaware). Should it have come to pass, this presented no undue concern, as a fascist takeover would ultimately still have met with the same beneficiaries.

If, as Emily Caston characterises Capra’s theme in Celluloid Saviours, “a common man sets out to correct widespread social, political or economic injustice”, then, it cannot draw a line at the New Deal and cite equanimity. Because the New Deal only dresses in such paraphernalia as a means to profit. Deeds meanwhile, is a “corn-fed bohunk” and “as naïve as a child”. “New York’s New Cinderella Man” has no truck with the dehumanising effects of the urban melee (indeed, it is an abiding Capra theme that humanity can only blossom in the rural, moderate and small community, one that engenders common values and a shared spirit). Deeds may sound like a sap and a yokel when he wonders how others can get “So much pleasure out of hurting each other why don’t they try liking each other for a while?” but it’s quite clear such thinking is exactlywhat the system doesn’t want. And whatever Capra’s idiosyncrasies, post-WWII he found such an attitude, increasingly hard to locate within himself, had gone out of fashion too.

Not that Capra’s movie was whiter than white either, of course: “I said you had dirty plaster!” comments a journo after his editor delivers a thunderous tirade of abuse at his staff and asks what one of his reporters was muttering on the way out of the meeting. Kael suggested Capra’s “folk humour is better in slightly shorter doses… but there’s no use fighting one’s enjoyment of this homey fantasy demonstrating the triumph of small-town values over big-city cynicism”.

Talking of which, Anthony Holden was understandably suspicious of the filmmaker’s Best Director Oscar: “All Capra’s efforts as Academy president were doubly rewarded by his second Best Director award…” That was the only win of Mr. Deeds’ five nominations (Best Picture went to The Great Zeigfeld). It was, however his third Best Picture nomination (out of seven). Of his pictures, it’s probably safe to suggest the quartet It’s a Wonderful Life, Mr. Smith Goes to Washington, Mr. Deeds and It Happened One Night are at the top of most people’s lists, and rightly so. 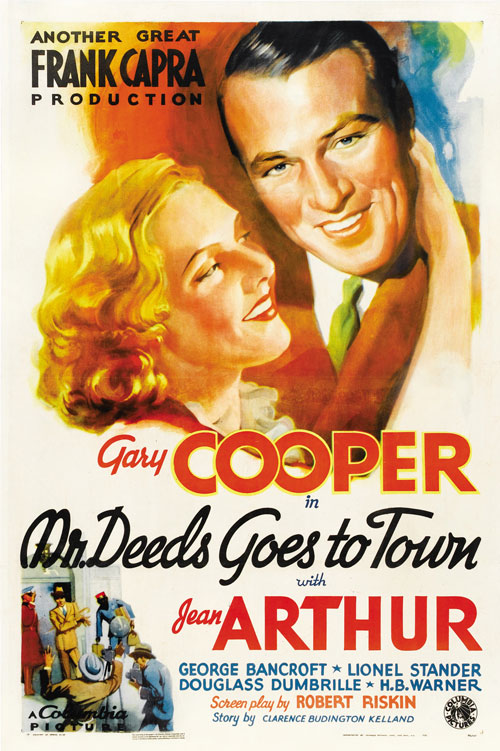