We’ve opened a doorway to a world we know nothing about.

It’s been suggested that 33rd-degree mason Roland Emmerich has been dutifully delivering both soft disclosure and predictive programming/disinformation for decades, the latter most overtly in his apocalypse/climate-change pictures. Anyone who could come up with Moonfall is brazenly yanking our collective chains. Way back when he was starting out in Hollywood, though, he may have skirted more plausible territory, at least in terms of explaining how one might simultaneously acknowledge the space hoax and the viability of other worlds. Stargate isn’t an especially good movie, but its legacy attests to the appeal of its premise, which still seems to have legs, in some shape or form.

The natural impulse, in discarding one lie, is to reject anything related thereto. So, if one becomes aware that deception is the prevailing currency in terms of space/ the Universe/ Earth shape, the reasonable conclusion would be that any conjecture on life “out there” is similarly intended to hype up the lie, to reinforce the essential “truths” by sprinkling speculative science-fiction over the top. We are, surely, the centre of the Universe and, at least physically, alone, if the obverse intent is to suggest we are unimportant pinpricks in a bewilderingly infinite cosmos.

Likewise, the idea that we are seeded, or in some way related to others out there is necessarily a tool to detach us from our true divine heritage; the former is the Gnostic Luciferianism Jay Dyer is so partial to exposing, reading its gospel into near-enough all Hollywood texts and perhaps most overpoweringly the output of Ridley Scott. If any but Numero Uno is suggested to have been calling any shots, it must, by definition, be a demiurgic influence, and therefore any correlate – that we must discover own godhood, our Luciferian becoming (or singularity), by any means available (since our creation is morally relative) – follows on logically.

Generally, with regard to the sacred text of blockbuster spectacles, the guiding principle is to mix truth and lies, such that unpicking the pristine kernel – if in fact there is one in the given example – becomes a taxing experience. Stargate offers a means – the portal/wormhole of the title – to travel to another world, but Emmerich will still throw in spaceships (in space) at a late hour, along with a globe world. He loves the adulterated blend, calling out flaws in mainstream Egyptology, invoking the mysteries of the Great Pyramid and the popular line of ancient contact with advanced races who appeared to us as deities. All previously suggested, be it in von Daniken’s Chariots of the Gods, Graham Hancock’s Fingerprints of the Same, or Doctor Who encountering Sutekh the Destroyer in Pyramids of Mars.

I suspect this is the first time I’ve seen Stargate since its release; I doubtless saw the odd episode of the TV version, but nothing about it really seized my undivided. I didn’t think much of the surprise hit on its release, and that hasn’t changed. It looks good; it confirms Emmerich knows how to shoot a picture, and that Karl Walter Lindenlaub (his regular DP through the ’90s) is a dab hand at a cinematic panorama. Terry Gilliam dismissed the director at one point by citing to his blatant imitation of Spielberg, but the key point is that Emmerich genuinely understands the craft, imitator or otherwise; he knows how to compose shots, how to stage action and – during the early scenes – lend the material an “authentic” Indy veneer. Indeed, if there was anyone who would have been a reliable replacement for Spielberg in the last two entries of that franchise, it would have been Emmerich. Crucially, he’s good with FX too, probably the best blockbuster filmmaker bar Michael Bay in that regard (the CGI retracting helmets here are a bit of a bust, though).

Where he falters with Stargate is that he’s unable to maintain any storytelling momentum following our heroes’ arrival on (unnamed here) Abydos. Devlin referenced Lawrence of Arabia, and the picture moves from Egypt to a planet that looks like Egypt (funny that). The crucial issue is that Lawrence of Arabia, for all its scale, was fundamentally about character; it was this that sustained it and ensured its internal tension. Stargate has none. The characters are rubbish.

James Spader sparks in the early scenes – he wasn’t keen on the screenplay and admitted to doing it for the money – but once he’s embroiled in a soggy romance with Sha’uri (MIli Avital), any engagement evaporates (she’s eye candy, with no personality attached). Kurt Russell is introduced with a suicidal bent, owing to the loss of his son, and will develop a quasi-surrogate relationship with Skaara (Alexis Cruz). It’s the dog end of Russell A-lister roles, though: he’s buffed up but utterly bland (see also Soldier); there’s generally been an inverse ratio between how financially successful his movies are and how engaging he is in them.

What this means is that the first half hour of Stargate promises a lot; it’s a solid set up, Spader is engaging when he’s up against the doubting establishment (“The Pharaohs of The Fourth Dynasty did not build the Great Pyramid”, to which he receives derisive suggestions that he probably believes it was “Men from Atlantis? Or Martians perhaps?” and promptly clears the room). And again, when trouncing Richard Kind’s inept translations on site. Viveca Lindfors also provides some gravitas. Then, on arrival, Emmerich and Devlin (jointly credited for the screenplay) pull the plug. We’ve got sand, Spader, a slobber Bantha (George Lucas Komedy) and stereotype native slaves who need saving. Romance. A sandstorm. Attack of the Ra guards (who set the trend of for anthropomorphic humans being mech masks: next stop, Green Goblin).

The Fifth Element had fun with its riffs on Egyptological lore. Stargate offers kiddie-movie notes – for slaves, read Temple of Doom or Ewoks – and undercooked key points. It descends into something of a blur of incoherence and listlessness in the vein of the also-desert-set Mad Max: Beyond Thunderdome. Jaye Davidson, Fresh from his Crying Game cock shock and all set to retire, decided not to turn down his $1m asking price and essays a fetching feminine corset (Emmerich gets his money’s worth in the Director’s Cut, putting him in a loin cloth). His Ra is also, curiously, surrounded by kids in their skimpies. Apparently, per the commentary, “to create unease in the audience”. Okay… A picture speaks a thousand words. I guess Bryan Singer wasn’t directing, at least.

Jackson: It says a traveller from distant stars escaped from a dying world looking to extend his own life.

We’re told some blah about Ra’s origins and that he “took him, possessed his body, like some sort of parasite looking for a host”. Notably, when we glimpse his original form, he’s very much in the Grey alien type mould, so sticking to the party line of ET presentation at that point. Ra lands in the North African desert in 8,000 BC (“Egyptian culture didn’t even exist then” – clearly sticking to the official line on that one, though the Cayce one is out too); Emmerich would return to exotic pre-history with his mammoths and Atlanteans movie 10,000 BC (in the non-Emmerich TV version, Atlantis turns out to be in the Pegasus galaxy). Pertaining to ideas of controlling history and information, after the rebellion on Earth that also buried all memory of this space alien, on Abydos, Ra “outlawed reading and writing. He didn’t want the people to remember the truth” For similar, see the question of “What if history was very different to the one we are told, rewritten (with judiciously permitted reading and writing) circa 1700?”

So goes the blend of truth and tissues of lies. Emmerich draws on nukes (a disused nuclear missile silo becomes the Stargate base; O’Neill plans to nuke the Stargate; Ra notes how much they have advanced, such that they have “harnessed the power of the atom”). Science is there to support Jackson’s outrageous theories (“Sonic and radio carbon dating tests are conclusive”). Niburu seems to get an oblique reference (“I’m on Planet X, looking for a guy…”) Life doesn’t have much use for soul; “I was dead” observes Jackson, and Ra tells him humans are “so easy to repair”. Ra is proprietorial, like a Prometheus Engineer/entitled demiurge (“I created your civilisation; Now I will destroy it”).

The military, meanwhile, agents of the deep state, are pretty decent all told, and make for an ultimately jolly blend with the scientific establishment after some teething concerns. O’Neill tells Jackson “I’m here in case you succeed” and we later learn his instruction is to blow the Stargate at any signs of possible danger; this is, of course, absolutely the LAST thing the actual deep state would do.

O’Neill: Give my regards to King Tut, asshole!

Composer David Arnold gets his Hollywood break, seemingly by channelling John Williams at his least essential (there’s more than a hint of Born on the Fourth of July). Stargate’s appeal is all in the premise, most of which is squandered in the finished picture. Emmerich and Devlin say they always planned a trilogy, but in the wake of their only follow up (Independence Day: Resurgence), it’s probably as well the never-choosy MGM passed (the TV version/s was going like gangbusters for them). If there’s a positive here, it’s that Emmerich’s moviemaking is almost restrained in amplitude. It does make the case, though, that his oeuvre would probably command less derision had he worked with decent screenwriters. 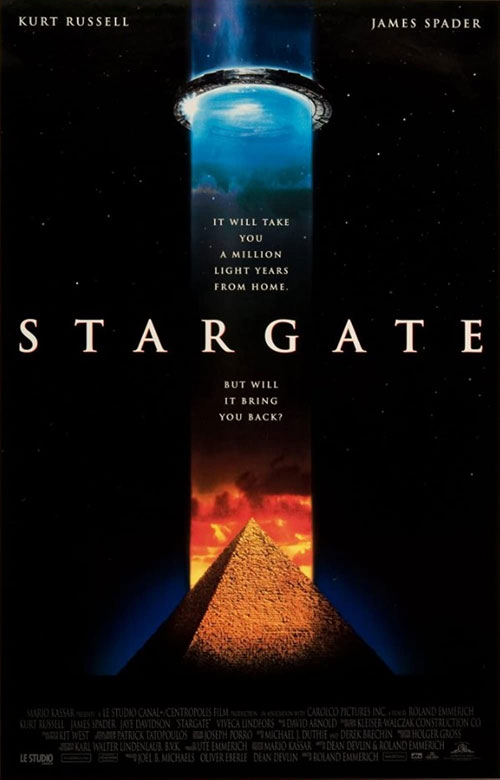