It wasn’t my fault. The magician did it. Honest.

Kubrick’s disinherited first feature, a “bumbling amateur film exercise”. Albeit, at a shade over an hour, Fear and Desire is really closer to an extended short. The through line to the director’s later war screeds is evident here, but with its overblown philosophising, you’d wouldn’t be far wrong assuming the picture was a lost Malick student film.

It’s a curio, then, no more than that, and while some will attempt to reclaim Fear and Desire as an early example of Kubrick’s genius – you can find it on YouTube, where a prize comment has been amusingly pinned: “It’s so inspiring to know that Kubrick was once Ed Wood” – the picture is mostly stodgy ruminant. Yes, it’s true, Kubrick’s photographer’s eye is present and correct, although the black-and-white is undistinguished in the vague forest setting; one might mislead oneself into assuming it was a modern digital production as essayed by the likes of Fincher or Cuaron, so unprepossessing is it. There’s effective editing at points too, but more pervasive is the obviously miniscule budget supporting a shoot in the Californian mountains – quite where these soldiers are trapped behind enemy lines is unclear, but I’ll hazard it isn’t supposed to be America – with a cast of mostly unpersuasive amateurs, over-digested dialogue and clumsy contemplation (cue interior monologues), and a command of storytelling that tends to the listless.

Fear and Desire has been oft-cited as allegorical, probably because it announces itself that way. David Allen tells us going in: “the enemies that struggle here [in the forest] do not exist unless we call them into being”. Sigh. There’s more: “They have no other country but the mind”. The suggestion that, in the forest, they are “outside history” is an interesting one, though (because what is history but an officially prescribed means of relating to the past). But let’s not get carried away. If you want some more cold porridge to contemplate, how about “The glaciers have melted away, and now we’re all islands”. At the end, contemplating the return of Mac – he isn’t coming, alive anyway, since he decided to make himself a very conspicuous target of German gunfire while yelling at the “half-witted cannibals” – Corby ponders “I’m not sure if we’ve even come back”. This between-realms state is suggestive of the later desert-set Sole Survivor, itself very much in the lineage of The Twilight Zone.

With the exception of Frank Silvera – an actual thesp – as the sergeant Mac, the limitations of amateurs playing soldiers is unflatteringly obvious. Particularly since the least proficient among them – Kenneth Harp as Lieutenant Corby and Steve Coit as Private Fletcher – are called upon to double up as a couple of short-lived German officers (this has been suggested as merely a budgetary convenience, although my immediate response was Scanners’ “I had killed a man. A man who looked like me” since that’s what exactly they do. Juli Kearns contextualises this in terms the director’s abiding use of double symbolism). However, it’s future director Paul Mazursky (Bob & Carol & Ted & Alice) who makes the strongest impression as babbling loon Private Sidney. Not because he’s overly skilled, but because his situation is compellingly drawn.

If Fear and Desire has a saving grace amid the haphazard scouting around and mulling, prior to the “dramatic” escape, it’s the sequence in which Sidney is charged with keeping watch on captive fish girl Virginia Leith while the other three attend to their raft. Kubrick imbues the scene with the unnerving threat of imminent rape as Sidney alternates between pleading, entertaining and professing his desire for the girl. Eventually, she succeeds in persuading him to free her bonds by managing a becoming smile; she takes her chance and makes a run for it, but he shoots her down before babbling on about Prospero.

Mazursky would later – much later – direct an adaptation of The Tempest, and the general construct here, of a “shipwrecked” crew cast adrift on a forest/island might be considered. If you’re keen on Tempest allusions, Kearns’ analysis is chock full of them. Whether one sees this as germane to Kubrick the genius or evidence of youthful pretension is in the eye of the beholder. Regardless, the director makes this sequence gripping in a manner that eludes the rest of the picture, and Leith gives a fine reactive performance (she barely speaks).

While Kearns’ analyses are rigorous in their own way, her plea to “think in terms of art with intention, which isn’t conspiracy and has nothing to do with conspiracy theories” is inherently limiting, as Kubrick was both artist and tool/critic of the Elite and its practices. Besides which, a significant part of this site is expressly inclined to entwining art and conspiracy theories, so I wouldn’t so much spurn her plea as regard it with benign, slightly patronising indifference. I would, however, nod sagely at “Kubrick, the magician, intentionally obfuscates and reveals these elements that betray the overt and naturalistic storyline as being artifice”. Kearns sees Kubrick as Prospero, master of illusions, and identifies the forest as a maze, a recurrent Kubrick motif. Otherwise, though, I found much of her analysis either reaching or unilluminating. Possibly because I’m unconvinced there’s much to illuminate.

Much of the concept is entirely pertinent – Fletcher comments “I guess I’m not built for this” at the end and Corby replies “Nobody ever was. It’s all a trick we perform, when we’d rather not die immediately” – and Kubrick would return to armed conflict in five of his subsequent pictures (so just under half). Two of them – Paths of Glory and Full Metal Jacket – outright grapple with its effects on the psyche and soul. Which isn’t to make a case for Fear and Desire as a thematically successful and cogent part of his body of work. But neither is it entirely divorced from his interests.

There’s little suggestion here that Kubrick would go on to become the Elite’s biggest asset and subsequent leaker of secrets, both paid-up member and then disavower, willing maestro of Moon landings and later bumped off for spilling too many beans in Eyes Wide Shut. I’m sure some (Miles Mathis probably, although he isn’t a huge fan and only has 3 of the directors in his top 100 movies) would make a case that Kubrick’s Hollywood destiny was precisely mapped out for him beforehand (not that it isn’t for some or even many). Interesting to note that Stanley’s dad was a homeopath, while his uncle (who invested in Fear and Desire) was a pharmacist. Although, the divide between these roles, back in the nascent Rockefeller-influence days, probably wasn’t so acutely pronounced.

Leon Vitali, Kubrick’s assistant said “Stanley really, really hated the movie. He absolutely loathed it”. The horse’s mouth sounds slightly less staunch in the late-60s interview excerpt preceding the YouTube upload, however. He admits to it being “very, very dull” but suggests it has “some good moments”. He’d do his best to make Fear and Desire very difficult to see, and its current circulation is largely down to a copy discovered in Puerto Rico in 2010. The picture was shot silent-ish, the dialogue then looped, which rather adds to the flavour of art-house aspiration. The screenplay is credited to Howard Sackler – later a Pulitzer Prize winner and co-writer of the pre-eminent Jaws 2 – who’d also pen the director’s follow-up Killer’s Kiss. Which is one Kubrickdidn’t seek to wipe from the face of the Earth. 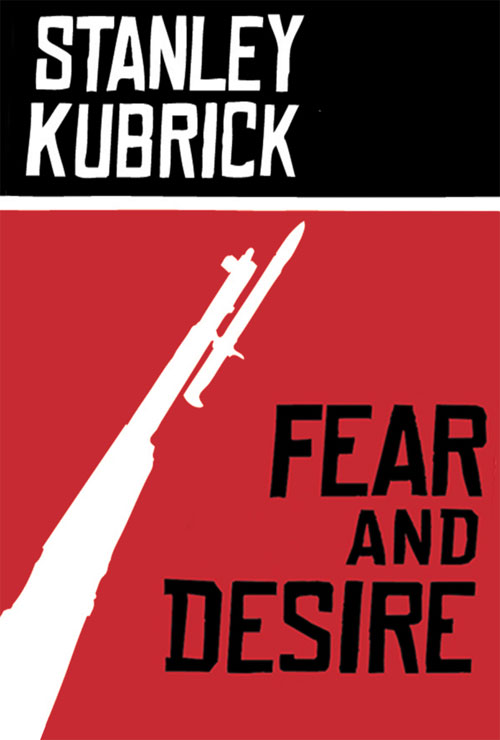