(Director’s Cut) This is such a profoundly odd choice for a big-screen take on the The X-Files, almost as if Chris Carter was doing penance for the empty vessel that was Fight the Future by reversing full speed in the opposite direction. That, or he’d been told to make damn sure there’d be no chance of an alien invasion-2012 third movie. You want difficult, gnarly subject matter? What’s that? You don’t? Tough. I’m giving you (heroic) paedophile priests and grisly organ transplants. Scratch that, not just organ transplants: head transplants! You want Scully and Mulder investigating as of old? Hard cheese, they far adrift from the FBI’s nurturing bosom, and Scully doesn’t give a stuff for the investigation. Consequently, I Want to Believe is kind of fascinating, even if it’s less than entirely successful in pulling of its distinctive conceit.

I will say this, though. Carter’s direction here, aided and abetted by stunning wintry photography from Bill Roe, is some of his best. It’s firmly in the territory of considered restraint that characterised Duane Barry, as opposed to the seasick-camera “virtuosity” of Triangle or The Postmodern Prometheus. His only real blunder can be seen if you stick around for the end credits; you’ll witness Mulder and Scully sailing across the sea to see their Uncle Sam.

Coming to this after the terminal decline in characterisation of Season 9, it’s something of a relief to find Mulder given quick deductive skills and a keen interest once more. Rob Shearman suggested otherwise, but David Duchovny seems engaged by the role, keen to be the character again, even if that fake beard stinks. Mulder knows where to look, even if the FBI are determinedly slow on the uptake (they have called him in, offering exoneration for his help, at the behest of Amanda Peet’s Special Agent Dakota Whitney; her partner Mosley Drummy (Xzibit) is reluctant and truculent). He can tell Father Joe is on the up and up (Billy Connolly is low key and considered as the ex-priest. It surely isn’t insignificant that he’s playing someone guilty of abuse, as someone who was abused himself). Scully, however, is only interested in savaging the man for his crimes.

You could legitimately say fair play Scully, although you could as legitimately question her variable faith, which one must conclude amounts to not so much of value on this evidence. Indeed, her behaviour throughout rather piles up as a case against her as a sensitive, empathic person. She was so awful in Season 9 that anything else would be a relief, and there is at least some solid “Where are we now?” interplay between the ill-advisedly romantically entwined pair, but Carter’s choices for the character generally appear expressly designed to make her as unsympathetic as possible.

Despite everything she’s seen, Dana can only countenance that Joe is a liar (that his visions regarding abduction victims are a deception). Except, it seems when he has something personal to say about her life (so what does that say about her?) And then she blames him because she took notice. As for her preoccupation, applying allopathically based suffering to a child who may not pull through based on her reckless doggedness, one can only concur that Father Ybarra (Adam Godley) is correct to rebuke her desire to go forward, regardless of the child’s detriment (in so doing manipulating his parents into agreeing to her preferred course). It’s notable that the last scene doesn’t provide us with the answer of how the operation went (or whether the child survived). It’s interesting too that she wants shot of the darkness of the FBI – and would deny Mulder his darkness: “This is who I am” he tells her – since her mission statement as a doctor seems determined to invite that self-same thing.

As such, Scully’s there at the end to clobber serial abductor Callum Keith Rennie (a buddy of Duchovny who’s worked again with him on Californication) before he can do for Mulder, but she’s largely absent from his third-act investigations. Not that Mulder is given anything especially heroic to do, entirely consistent with the series, which showed him more than fallible when it came to classic action-man abilities. Fox finds what he needs to, but he’s in no state to save someone about to lose her head when he gets there. If nothing else, though, I was engaged by the duo in I Want to Believe, which I can’t say had really been the case since they decided to make babies together (the odd episode with a resurrected Mulder acting out aside).

But back to the subject matter. Could it be that Carter is here deciding to shine a spotlight on what he knows it’s all about? Not that the whole Grey deal isn’t a pertinent one, but the way it’s presented in the show is obfuscating to the max. Here, though, human trafficking and child predation are explicitly connected, albeit not explicitly intertwined motivationally within the narrative. One might suggest there are covert apologias here. After all, Joe is presented as a “good” man in terms of the narrative, one atoning for his crimes, who castrated himself but was unable to stop, and who is now being used by God as a vessel; Mulder even expresses the view “It’s an injustice to the man’s name” at the end, when a news report implicates him in the murders. Meanwhile the medical doctors, the ones hacking off limbs with impunity, are contrasted with the good doctor, Scully, who is wielding the scalpel in a caring, sharing way. There are grey lines being suggested, it seems, and the way Hollywood works, one would be forgiven for perceiving something sinister in such blurring.

Regardless of possibly ameliorating factors, Carter does seem to be saying that child abuse is rife with his second X-Files movie, and that it links into every nook of the underworld and its covert activities. Dayshyn may be trying to save his husband – a victim of Joe and thus emphasising the generational cycle of the abuse, something perpetuated in satanic and Elite families – via an unlikely head transplant, but he clearly isn’t the big cheese here. He’s a cog in the wheel, the ramifications of which are left unexplored. Perhaps, had the picture gained wider – or any – recognition, then the villain’s sexuality would have ignited a degree of controversy.

I remember being cautiously positive about the movie on its release, while appreciating the general disappointment. I mean, I wanted to see that 2012 invasion movie as much as anyone who felt it had been as good as promised. But then, perhaps they were never really going to. It would have let the cat out of the bag. Just look how Carter immediately retconned the end of the belated Season 10. I Want to Believe continues to hold up as a decent piece of work. It’s pretty gruey, mind; I’m surprised it only earned a 15 certificate in the UK. And in terms of subject matter, even if it boasts organ traffickers instead of serial killers, it feels like it’s nearly a decade behind the times. When The X-Files returned eight years later, it would explicitly usher in a very different kind of darkness, that of plandemic predictive programming. I Want to Believe may simply be alluding to what is going on behind the curtain, but you could never have expected the show to draw it back. 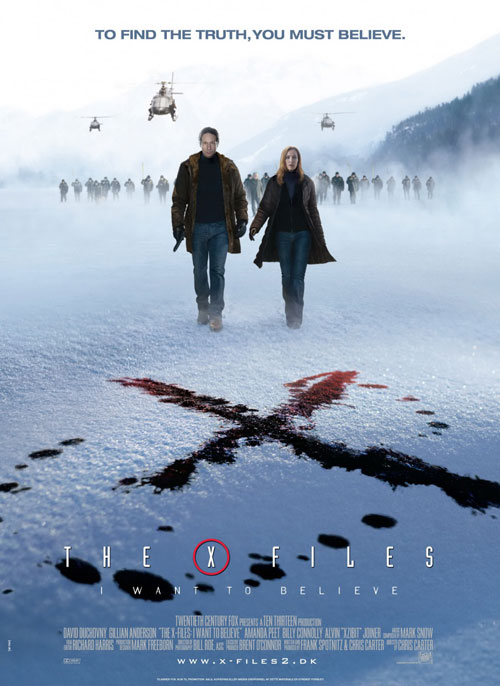