He’s a poet warrior in the classical sense.

It’s curious to look back at Apocalypse Now and note that its reception wasn’t nearly as rapturous as the regard in which it is now held. Indeed, from critics’ views, one might mistake Francis Ford Coppola for the kind of guy who had slapped together a makeshift epic with Band-Aids and sticky tape. The kind of guy who would subsequently unleash several variations of his opus, on the basis that his unexpurgated vision had never quite made it to screen. That, alas, is the consequence of a slew of subsequent failures, hindsight and too much time on one’s hands to fiddle (see also Michael Mann). Apocalypse Now is markedly better without any of the later amendments/reduxes, of course, just as the critics were off beam in greeting it in such qualified terms. It’s an astonishing picture, and that its director hasn’t even come close since is okay, actually. He’s done enough just with this one movie, let alone the three classics that preceded it.

Inevitably, when a picture has become as venerated and (over) exposed as Apocalypse Now has, some degree of backlash to the re-evaluation will occur. Particularly when the likes of Alex Garland are indulging their umpteenth iteration of its third act (The Beach, 28 Days Later, Sunshine). The movie lends itself to student cool, or the kind of cited aberration where its shown to recruits before being sent to Iraq.

John Patterson claimed to be rather above it all now when discussing the bootleg cut that had been reviewed for Film Threat: “We put it on the cover, with hints of what it contained: ‘The five-hour version you must see! See Sheen stabbing children! Hopper’s death scene! Brando blabbing!’” However, “I’ve come to think that Apocalypse Now is a film you finally grow out of. As Coppola said in 1979: ‘It’s less of a movie and more of an experience’. It’s a theme-park movie, each bravura sequence a different thrill-ride, the parts greater than the whole, the ending almost wilfully incoherent and unintegrated. The borrowings from Werner Herzog’s Aguirre: Wrath of God (just as spectacular and more intellectually rigorous – on a budget of $300,000) are innumerable”.

None of which sounds bad at all, but is an effective pot to stir its diminishment: it’s just like another, better movie; it’s nothing more than a proto-blockbuster. Which, if such a hot take has the air of the familiar, is probably because it’s a near-rehearsal of criticisms at the time of release. Pauline Kael didn’t offer a dedicated review, but she identified its flash and noise at the expense of content and resonance, and she also claimed it wasn’t half as good as Aguirre: “Part of the widespread anticipation of Apocalypse Now was, I think, our readiness for a visionary, climactic, summing-up movie. We felt that terrible rehash of pop culture couldn’t go on, mustn’t go on – that something new was needed. Coppola must have felt that too, but he couldn’t supply it. His film was posited on great thoughts arriving at the end – a confrontation and a revelation. And when they weren’t there, people slunk out of the theatres, or tried to comfort themselves with chatter about the psychedelic imagery”.

For me, there’s no let down in Marlon Brando’s Kurtz. It may be slightly facetious to claim all the problems Coppola encountered help the picture in terms of the solutions reached, but necessity is the mother of invention in this case. Would Brando have been more impressive had he not, like the xenomorph, been kept to the shadows so as to disguise his workings (or weightings)? Would the picture’s elliptical, dissolve-heavy, constructed narration have been improved upon, had Coppola shot all he needed? Kael suggested the narration “seems designed to plug the holes”, while Patterson claimed the bootleg was better without it. However, in contrast to Blade Runner, I’d argue the Michael Herr written ruminations are first rate, anchoring the picture to the enveloping insanity the crew encounter (they are also crucial mythmaking, building the fabular force that is Kurtz).

The psychedelia is referenced as a diminutive, but it shouldn’t be. There’s no need for apologia. Perhaps Kael and Pattinson are right, that it’s hollow (like Elliot’s men), and it’s only the gradual slide in narrative content since that makes it seem nourishing. But I don’t think so. There’s a very clear, progressive breakdown of function and form in the original cut, less and less cognitive coherence. It’s stablished that Willard is not in the best mental health, and yet he is, compared to everyone else. Even the captain, the most sensible person on the boat, makes most crucial mistakes (checking the cargo on another boat, choosing the wrong moment to lose it).

More still, in terms of the psychedelic, Apocalypse Now is an intoxicating, heady brew. There’s something of twisted Edenic magick madness – “fuckin’ pagan idolatry” – to the jungle cruise, led in by Morrison’s incantatory fever dream and accentuated by strange potions (smoke), light, sound and altered states. Eve more than Cronenberg’s assessment of Taxi Driver, Apocalypse Now can boast the all-enveloping world-building, mystery and epic scope of science fiction. Or fantasy: an Odyssey or Arthurian quest narrative, in which the hero must confront a transformed (or hollow) man, one promoting bold new “advances” for society (albeit philosophically/empirically rather than technologically). And Carmine Coppola’s pervasive synth places this Nam in the heightened, foreign realm and range of Lynch’s Dune.

Coppola suggested the movie was less anti-war than “anti-lie”, and what is clear about Kurtz is that his continued existence is unconscionable to his masters, to the controllers (or the Elite), not because of his mental state (“And very obviously he has gone insane. Obviously insane”) or because “He’s operating out there without any decent restraint, totally beyond the pale of acceptable human conduct”. As Willard notes “It wasn’t just insanity and murder. there was enough of that to go round for everyone”. It’s that he doesn’t believe the prevailing narrative, is unwilling to sell it and so becomes a threat.

Willard “couldn’t believe they wanted this man dead”; more still, that he was so close to the upper echelons of the Elite (“He was being groomed for one of the top slots in the corporation”). So when Willard asserts “Even the jungle wanted him dead”, this may be wishful thinking. If it weren’t for the little thing of piling up the bodies, though, you might construe that Kurtz was quite centred, recognising the contradictions that are expressly inculcated into society and its structures, and rejecting them. He’s a dangerous man because he has found another way that others will heed, which must be crushed, just as it would for any notional national leader failing to follow a prevailing narrative (note his anecdote regarding polio inoculations). When Willard slays Kurtz, he inherits his powers, such that antagonistic forces drop their weapons as one when he does. That’s the power of the opposing narrative and its threat.

Kael, however, reduced the director’s theme to the banal (and currently very popular) “Trying to say something big, Coppola got tied up in a big knot of American self-hatred and guilt, and what the picture boiled down to was: White man – he devil”. It’s a take that never occurred to me in all my viewings of the movie (except in the most obvious sense of this is the war being waged in this place, but it’s hardly battering you with Oliver Stone politics in that regard). If that were all Apocalypse Now had to say, I might come down on Kael’s side, to a degree (excepting that, however you cut it, it’s dazzling filmmaking, rich and resonant in a visual sense alone).

Kael did have Duvall in a nutshell when she suggested he might be “one of those actors who are stars when they play character parts (as in Apocalypse Now), but character actors when they play star parts; some element seems to be missing – we don’t have star empathy with him” (although, he would win his Oscar for a lead). She was of the view that “His rip-roaring madness in Apocalypse Now was almost too good; there was no higher pitch of madness for the picture to attain – it climaxed out in the first half”.

Duvall is, perhaps, the movie’s most dynamic character (hence Colonel Kilgore’s popularity with gung-ho types), but I find Brando equally compelling. Both he and Dennis Hopper came up with many of their own lines, although the latter was so out of his gourd, “said whatever came into his head when the camera was rolling” might be more accurate. Marlon didn’t much like Dennis (Brando was, by this point, clearly a right so-and-so, however much Hopper doubtless deserved any flak coming his way). Willard is Sheen’s best role, and I can’t see any of the others mooted (Nicholson, Keitel, Caan, Nolte, Pacino) having been able to provide the required passivity. McQueen maybe, but too much star baggage, and too old (taciturn Clint would likewise have unbalanced it). Larry Fishburne, Sam Bottoms, Albert Hall and Frederic Forrest – the latter another contender for the most dynamic, albeit very different to Duvall – all convince you they’re living their characters. Elsewhere, Scott Glenn reaps a thankless cameo and a pre-Star Wars Harrison Ford a respectable bespectacled one.

Apocalypse Now shared the Palme d’Or with The Tin Drum, but its Oscar chances were undoubtedly diluted by The Deer Hunter winning the big award the year before (something similar would happen with Platoon, whereby the more interesting Nam movie – Kubrick’s – would come a year later than the big Oscar winner). Also, just maybe, this wasn’t the kind of signal Hollywood wished to send out: a reward for all the flagrant excess, insane budgets and out-of-control productions (celebrating it would have been almost as unthinkable as doing the same for Heaven’s Gate). The snubs would have been unforgiveable, however, had Vittorio Storaro not won for cinematography, and likewise Walter Murch and co for Sound.

Coppola is currently sinking his own dime into the long-gestating Megalopolis, this after tinkering with Apocalypse Now and The Cotton Club and two decades where no one was very interested in his meagre, “indie” filmic output. I don’t think anyone is expecting much. A three-hour approximation of the French plantation scene, maybe. 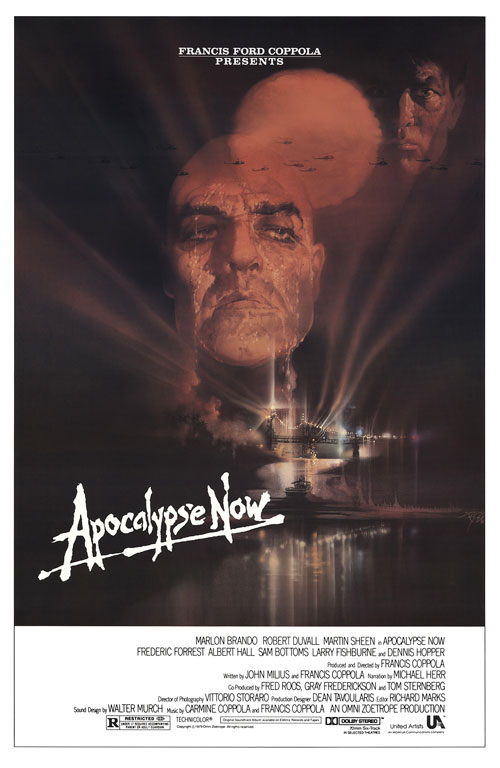