The world is just a story. I’m the storyteller.

There are, of course, no illusions about the game being played with Nolan brother Jonathan’s transhumanist paean. This is a world where, following in the Blade Runner line, the machines have the most heart and soul, and to underline the point, humans themselves are no more than the sum of their memories, redeployable years after their deaths, encased in fast-decaying physical vessels. Even the genuinely living ones are exactly as malleable and programmable as your average computer. There is, essentially, no difference. Except that, on balance, the machines are probably a little more durable.

Bernard: We are reflections of the people who made us.

Barring the rather pedestrian final episode, Season 4 might be the most satisfying season of Westworld in structural terms. Which may sound like damning with faint praise, given how consistently patchy the show has been, at times really feeling like the mutton dressed as lamb that comes with being one of HBO’s most expensive productions while getting so enamoured of all its timeframe tricksiness for the sake of it that it often missed the wood for the trees. It was also the case that, short on sympathetically traced characters being caught in the loops of plot-led revelations and pull-back reframes, it tended to live or die on the performers, which usually came to down to gnarly Ed and contemplative Jeffrey. Most of the others tended to be shallow, one-note or just a little bit bland.

Dolores: Maybe I’m not the one who’s broken. Maybe it’s the world that needs fixing.

That hasn’t really changed in Season 4. Where it gains traction is that the framing world, one where the AIs rule the humans, has much more juice in the tank than previous takes. There’s still the problem of Aaron Paul always playing Aaron Paul, Tessa Thompson always being comprehensively absent of personality, Evan Rachel Wood being sensitively underwhelming and Newton being condescendingly cocksure, like a slightly less po-mo Joss Whedon “feminist” character. Added to which, the scenarios of the newbies (Paul’s daughter, Waaalllt’s dad’s in real life) aren’t all that.

Some of the reveals – Dolores has been in a simulation all along, we discover (yet this possibility is evident from the first episode) – engender negligible wallop because they just weren’t that interesting in the first place. And some of the scenarios – Charlotte encountering trouble with the hosts – carry less weight than they might because they fall back on a ’60s Star Trek-type device (the AI cannot out-develop the human because it is limited by the humanity that developed it in the first place). Nevertheless, the clear sense of trajectory here does much to paper over the cracks.

Season 4 is essentially delivering a Planet of the Apes reversal, whereby the inferior/subjugated are now the masters. Nolan and Joy embrace with this the notion of the inevitable apocalypse, that “Past a certain point in your world, all roads lead to destruction”. This should be unsurprising, as the general thrust of Westworld is that the AI realm offers a better, more fruitful land in which to dwell and prospectively prosper. There are those humans, come the end of Season 4, who escape off grid, but its prospects would appear bleak, per Bernard’s probabilities; Dolores outright says, on withdrawing to the Sublime “Sentient life on Earth has ended. But some part of it might be preserved. In my world”. That may be machine elitism on her part, but given the only two survivors we see retreating to the outlands are a lesbian couple, that in itself may be symbolic.

Charlotte: Your will is no longer your own. It belongs to me.

Season 3 was predicting the societal collapse too, via Rehoboam, so in some respects, the leap from 2053 to 2083 isn’t very different. There, the AI was utilising predictive tools in order to restrict humans and control their opportunities. Obviously, that lends itself to metaphors for the Elite-controlled system too; by and large, we are programmed, born into a manufactured paradigm whereby we unquestioningly obey the control system and live according to its designated parameters, via our superiors (the Elite/the Hosts).

Maeve: And she may have been human, but she wasn’t like any human I’ve ever seen.

Season 4 offers some additional predictive programming/soft disclosure, however, since it’s all about machine-influenced viral transmission and subjugation of the populace. Westworld’s plandemic doesn’t feature nanotech delivered via administered shots, but rather opts for genetically engineered flies carrying a parasitic organism bred in tanks (which also recalls No Time to Die). Caleb even utters the giveaway – lest there was any doubt – “That black goo look familiar?” Given black goo has been cited as an ingredient in the vaccine, and black goo is a parasitic organism that can take over its host – which is also what is happening here – and given that the infected humans are controlled/instructed by transmitted waves (EM or radio-sonic – see 5G as a means of triggering nanotech, suggested as the method for eliciting the symptoms seen in flu-vaccine recipients during the early, fearmongering stages of the plandemic) and the revelation of method in Westworld Season 4 is unmistakeable.

“Welcome to the super spreader event of the century” mocks Charlotte. Obviously, this scenario isn’t one of outright depopulation, but in a generation, a society of susceptible, drone humans has been raised, surely mirroring the transhumanist agenda’s intent (as a reminder, the makers throw in occasional mask wearers during the 2083 proceedings).

Charlotte: They are experiencing God. The problem is, God is bored.

By this point in the show, our main human point of contact is Caleb, played as Jessie with added fringe benefits. He’s accused by his wife of indulging fantasies (“Chemtrails, government coverups. You see threats everywhere”: “I am not paranoid”), but we know he is right. Caleb’s singular purpose, other than a rather unpersuasive subplot about wanting to see his daughter again, is to emphasise that there’s no discernible difference between a distilled Caleb, from the sum of his memories, and actual Caleb. This, of course, should be no surprise, since one of the show’s tenets has been the machine being unaware it is a machine until it is alerted to the same. That, along with “What are humans if not biomachines?”. Thus, there is no soul in this mojo, and not even a glimmer of an inclination to mention that four-letter word. Indeed, the vessel he’s put in may even suggest consciousness is secondary (“The body always rejected the mind”). There’s imagery here suggesting the duplicates of Triangle, palpably so in Caleb’s escape attempt as he discovers prior bodies that have failed in the bid.

Charlotte: We’ve made them into what they made us.

All the humans in Westworld have is the material world. That is everything to them. So much so, the afterlife is now transposed to AI as their preserve. Those who wish to “transcend” – Transcendence being the title of a 2014 bomb starring the former Johnny Depp and directed by former Chris Nolan DP Wally Pfister, used to describe a technological singularity, one in which Johnny takes over everything including others via his teeming nanoparticles – are effectively moving upwards and onwards to a higher plane, a VR heaven, in which any choice is possible. Come the season coda, Maeve opts for a Westworld reset for “one last game”. She also promises “a game of my own making – a dangerous game” in reference to the 1934 movie. Also the language of Elite hunting parties on royal European retreats.

Maeve: This place has really gone to pot.

In context of the season, the very human hosts have succumbed to blinkered materialism themselves (on that score, even though this is essentially a transhumanist text, one can readily parallel our own despiritualised conditions): “They seem as wedded to their bodies as they do to the cities”. This is also the language of the fallen angels, though, attracted to and embedded in matter and losing sight of their origins. Luciferian, one might suggest.

Man in Black: You can’t fix a few millennia of broken DNA with a fucking hard drive.

While there are potent ideas and themes here, the series – as ever – is most successful when it’s propelled by the performances. There’s nothing in Season 4 that edges scenes of Ed Harris’ William (host) in conversation with Ed Harris’ Man in Black (human, mostly in stasis), because Harris electrifies his every scene. Only Wright comes close, making Bernard’s plotline seem more authentic than it probably is on paper. I wasn’t sufficiently taken by the last two seasons that I felt they merited write-ups. Both had individually strong episodes, but stuttered from the same problems of strong concept/ weak realisation that plagued Season 1. This one is remarkably solid in that regard, but it’s too late to right the ship.

Dolores: The world is just a story. I’m the storyteller

Ratings, which were tumbling anyway, have fallen even further, so whether WB/HBO, given to remorseless cancellations of projects since the change in CEO, goes for the fifth and final season remains to be seen. Retooling of output may suggest repositioning of messaging (see The Batman; calling on The Rock). If they don’t, I doubt it will be any great loss. An entire season set in an artificial reality is a little too suggestive of the last run of that other JJ series Lost. And while you’ve at least been told where you’ll stand with this one going in, the show’s entire raison d’être is about rug pulls. We may even discover machine heaven is actual heaven, but the only way to get there is to be one of them. 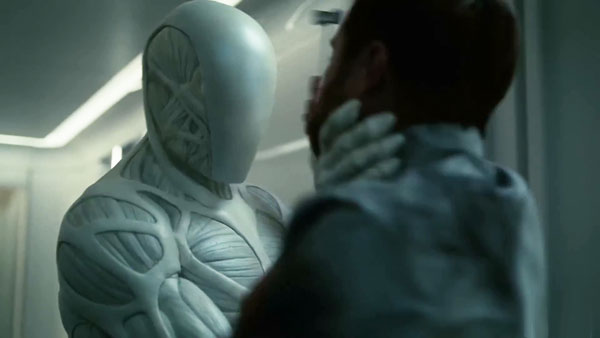