The Earth – Part I

Broaching the subject of the nature of terra firma, of the grounding of the ground ’pon which we all live (or lie beneath) is fractious. And if isn’t fractious, it invariably inspires ridicule. The charge of “Flat Earther” is tantamount to the “He believes in little green men from outer space” of yesteryear. Both, of course, reside firmly in the territory of bucking, or operating at variance to, the scared text of the presiding paradigm, and therefore, by implication, mainstream science.

Space aliens, while ostensibly visiting from officially designated outer space – to a degree, therefore, underlining that paradigm – are much too creative and uncontrollable for science, which prefers to keep them at a merely theoretical level, somewhere within the vague bounds of likelihood in an infinite and largely empty universe. If pressed, they’ll tend to a prospective panspermia of non-intelligent microbes. The Flat Earth, meanwhile, is a flat-out doctrine of ignorance, of when we didn’t know any better and were clearly less “evolved” and discriminating in our beliefs than we are now.

Division doesn’t end there. Even among those who can agree we’re being lied to – by NASA, by nation states, by natural-history programmes and their arch-frontman David Attenborough etc – there’s a wildly varying range of viewpoints and hypotheses. Some won’t go near Flat Earth because it tars otherwise “legitimate” interrogation of the truth about our world with an infectious brush of ridicule.

A case in point, Miles Mathis, at least deserves the credit of consistency in shunning topics he doesn’t want his followers to have any truck with. Reigning champ is Flat Earth (others include Pizzagate and trans Hollywood).  His mantra is essentially the standard response amongst conspirasphere alumni who wish to maintain some “credibility” (see also Bill Ryan and Project Avalon, where any mention of it is consigned to their hoax bin. September Clues Forum has it banished, while Stolen History locked its dedicated thread on the subject). The gist of it goes: it must be a psyop, as it’s used to ridicule anyone with a serious stake in the conspiracy arena (which means, for such would-be respectable fellows, there is no entry point to interrogating it – ahem – levelly).

Of course, the two things aren’t mutually exclusive. It can be a psyop and be legitimate. Miles’ take on FE bears quoting for its brazen certitude: “They want you to think there is some connection between Flat Earth and criticizing NASA or SpaceX. There isn’t. That connection has been manufactured. Just as there are no serial killers and no real Communists, there are no real Flat Earthers. Every single one of them is an agent in disguise, pretending to be a Flat Earther”. In a later piece, he admits to lunar cooling, considering it a badge of pride that “I have managed the astonishing feat of embracing Lunar cooling without embracing Flat Earth”.

Often too, those who are propounding Flat Earth are prone to voluble intolerance of those not up to speed – albeit, this can be equally true of any given subject in the esoteric arena – doubtless in part based on the deep scars of having to defend their case at every turn for much, much too long. Then there are the sub- or splinter groups: concave Earth (and hollow Earth); crater Earth; hollow Earth (within the globe Earth); convex Earth (beside the convex globe Earth); cosmic egg.

For my part, I’ve had no axe to grind and wasn’t inordinately exercised by the subject (to a degree, I’m still not, beyond its place in the bigger picture. Certainly not in any kind of proselytising sense). While fully cognisant of the NASA lie, the absence of first-hand knowledge and the variability of science – you know, often couching itself in the terms given by mainstream science – flourished by anyone wishing to validate their model left me largely dispassionate about theories and tending against being drawn either way. Obviously, to a greater or lesser extent, that experiential caveat applies to all these Q & As – whether one is willing to entertain the information or not, it cannot be treated on an evidential basis. Unless you’re a rare fish who has that direct experience – but as with all things, some subjects are prone to exercise one more than others. So without further preamble, down to business.

In terms of the following, confirmation or denial may lead naturally to a subsequent question, or it may yield inquiry from the “arsenal” of theory, conjecture and speculation regarding our place of residence. Consequently, there may sometimes appear to be leaps. For the background to the Q & A, see the index page.

Q. Is the Earth flat?

Q. Is the Earth round?

Q. Is the Earth in a crater?

Q. Is the Earth concave?

Q. Is the Earth convex?

Yes. (If question includes the firmament.)

Some may take issue with the definition of terms here. Convex is (most) often applied to the globe Earth model, so allowing it with qualifications may be more of a hindrance than a help. Additional to which, how much difference is there between a crater and a plane (the crater must, after all, be sitting on something)? That would partly be down to the literality of the Q & A method.

A different use of convex to the spinning globe model can be found in this Convex Earth documentary. There, they apply the term to an Earth tested as flat on the waters “because the continents have a convex relief, starting at the sea level, raising to the highest point and returning to the sea level”. In the course of their explanation, they quantify “the shape of our atmosphere which takes the form of a plain convex lens”. This is the same essential language as applied to the firmament in the Q & A. Obviously, to see it as convex, we need to be looking at it from the outside.

Q. Are there other craters or Earths besides this one?

No. (Earth is the only such crater here.)

However, with regard to the commonly cited origin of Crater Earth theory (that it is reflected by the Moon):

Q. Is the surface of the Moon as we see it a reflection of the Earth and physical realm beyond the ice wall? 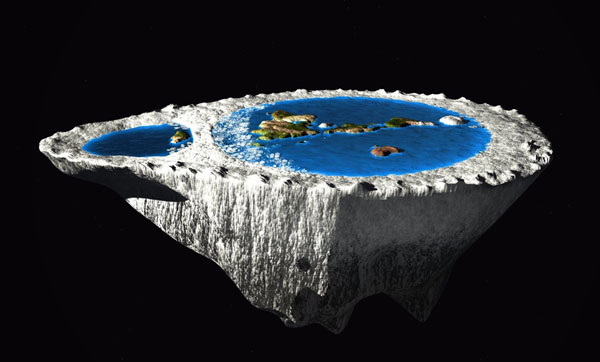 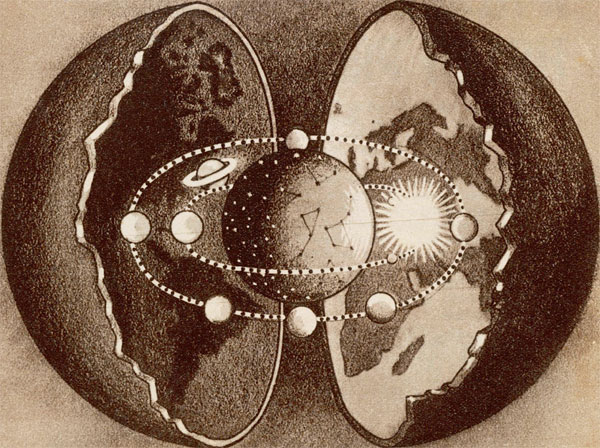 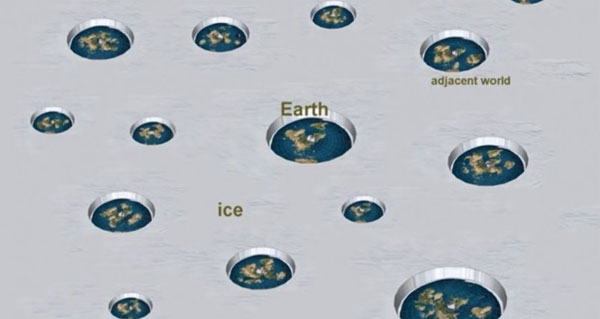 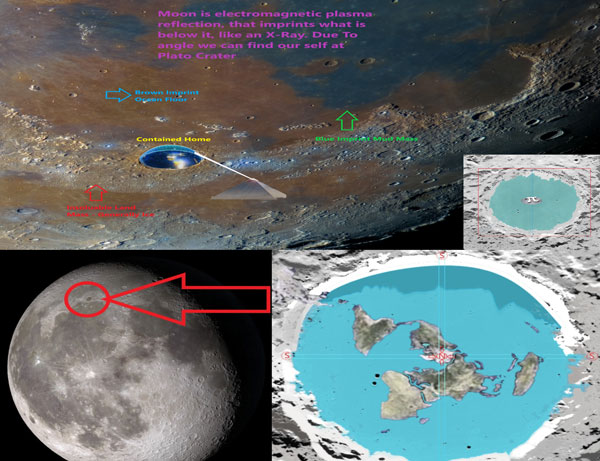