I am now authorised to… be loyal as a puppy.

Positives? Basil Pouledouris is back, as that Robocop 2 score was downright blasphemous. Also, Robert John Burke is fine as Murphy/Robocop, even if he looks a little like a cross between Mr Incredible and Powdered Toast Man with the helmet off. And let’s face it, regardless of how violent the original movie was, Robocop 2was just gratuitous and nasty in that regard, so there needed to be a pull back. Unfortunately, hitting reverse like this, to cater to kids’ toys markets, was equally… misguided. You see a movie like Robocop 3 – shooting completed in 1991, with the release delayed due to the bankruptcy – and it’s no wonder Orion ran aground.

Director Fred Dekker has fessed up to the many issues with the movie many times, as well he should, since he didn’t have to accept the gig, particularly with the restrictions the studio was imposing: kiddification; lowered budget;, pushing ahead rather than waiting for Weller, who was shooting Naked Lunch. There wasn’t even a new suit available, so casting was reportedly based on the actor being able to fit it. As with a number of elements here, there are conflicting accounts, as it’s also said Burke was picked for the emotional range he could bring to the role. Another area of dispute is killing off Lewis; it’s been widely stated this was Nancy Allen’s stipulation, doubtless inspired by Sigourney Weaver’s “fine” example, but Allen has tweeted it wasn’ther idea. It’s a particularly odd decision for a series attempting to shift to a younger/lighter tone to sacrifice an identification figure so immediately.

Dekker is spot on when he notes Robocop shouldn’t really have been a franchise at all. There was nowhere to go after the first movie: “the character’s arc was complete, which meant I was pretty much boned from the get-go”. The only thing you can do is to delve into the transhumanist consequences for the mind and soul of an individual who has been irrevocably transformed, and that just wasn’t happening. Because it’s an action franchise. This means the movies have to throw obstacles in the way of such introspection, such as reprogramming Robocop or putting him out of action or giving him conflicting directives, encumbrances that push him to a place prior to “What’s your name, son?” at the end of the Verhoeven movie. Perhaps that was the reason for trying to attract the kids. They might concentrate only on how Murphy is now super-strong and super-unstoppable, rather than super-emasculated. You know, like DC’s Cyborg.

Dekker, working from a Frank Miller story the studio wasn’t mad keen on, seems unsure of himself with his central character – and with Lewis – such that his partner will ask at one point “Robo, are you okay?” He replies “I’m fine. And call me Murphy”. You’re left wondering why exactly she call him Robo anyway? She’s surely the last person to do that. Later, super hacker kid Nikko (Remy Ryan) asks “Murphy?” and he replies “I was before”. So which is it? Mostly, Dekker seems to be finding ways for Murphy not to do stuff. It’s fifteen minutes before he makes an entrance. Then, when he does, he’s quickly incapacitated (“I got that heart you wanted” – because replacing his mechanical heart is just this instantaneous, off-the-cuff kind of thing: “I’m glad your new heart works”).

When he is back in action, it’s pitted against some ridiculous robot ninjas, the kind of hot garbage Dekker should have run a mile from. He’s unrepentant about both this and the homeless plotline. Of the latter, he suggests it failed to resonate because it – right-winger Miller’s idea – was “very left wing at a time when the country was very right wing”. No Fred, it was because it was the worst of trite, derivative nonsense: hero defends the homeless against an evil developer is the kind of thing you’d expect from The A-Team.

With the ninja, “I lacked the budget and the tenacity to get a Hong Kong stunt team to bring that style to an American film”. But perhaps, maybe, it was a really dim, stereotyping notion too? Doubtless OCP being bought by the Kanemitsu Corporation’s roots were in the likes of Sony buying up Columbia and general encroachment of Japan on US corporations – Rising Sun was released the same year, and if more direct in its targets, was also hamstrung – but shouldn’t immediately lead to Otomo (Bruce Locke) and robot ninjas (who can ever-so-quickly be reprogrammed from a laptop to attack each other). As for the Robocop jetpack… It’s Batman/Bond accessorising territory, quite apart from the shoddy effects work (Robocop 2’s robobike was already pushing it).

Still, more power to Dekker for seeing the positives. He does, after all, have a very slender filmography, so he needs to make the most of it: “We had a lot of strikes against us, but I’m actually very pleased with a lot of that movie. And I honestly believe that if it were more over-the-top – funnier, more cynical, more violent, and had Hong Kong style action – it would have been a huge success”. I doubt that very much. Perhaps, if you removed the homeless subplot, the whizz kid, killing Lewis, the robot ninja, the Splatterpunks, picked a different cinematographer… Dekker actually liked – get this – Gary B Kibbe’s work on Prince of Darkness and They Live!, an admission of aesthetic sensibility that ought to have immediately disqualified him from the director’s chair, and should have given pause to anyone willing to entertain any of his creative decisions.

There’s no reason a PG-13 movie couldn’t have been replete with most of the original’s satirical content, even without the splatter (punk). But Dekker largely disposes of this most essential element. John Castle is fine as McDaggett, heading up Rehabilitation Concepts, but he isn’t allowed to be remotely witty in his evil. There’s the odd moment that reminds you of the original, such as an axed OCP staffer going to jump to his death off the ledge as his vidlinked wife says “It can’t be that bad. Honey? Are you there? Can you hear me? Every corporation goes through this sort of thing”. Warning “You’re jeopardising your retirement benefits!” when the police refuse to join in routing the terrorists. And the news announcement “Three nuns and five clergy are dead today, in what is believed to be the latest atrocity by the killer cyborg Robocop” (immediately undermined by the anchor quitting it disgust). I liked Robocop in a pimp mobile too, but better in concept than execution.

None of Dekker’s other ideas, ones either nixed or after the fact – the OCP building transforming into a massive robot, and Lewis revealed at the end as a Robocop herself – inspire any confidence whatsoever. I’d already been burned by Robocop 2 at this point, so Robocop 3’s failure was sad but not altogether surprising. Familiar faces – Rip Torn, Bradley Whitford, CCH Pounder, Stephen Root, Jeff Garlin, Daniel von Bargen (Mr Kruger in Seinfeld) – join returnees Felton Perry (Johnson) and Angie Bolling (Ellen Murphy). Dekker chum Shane Black can also be seen as a cop. The cast can’t be blamed for this debacle, but none of them succeed in lifting it. I guess Decker did us a service though, as he ensures Robocop 2 doesn’t seem quite so bad in comparison. 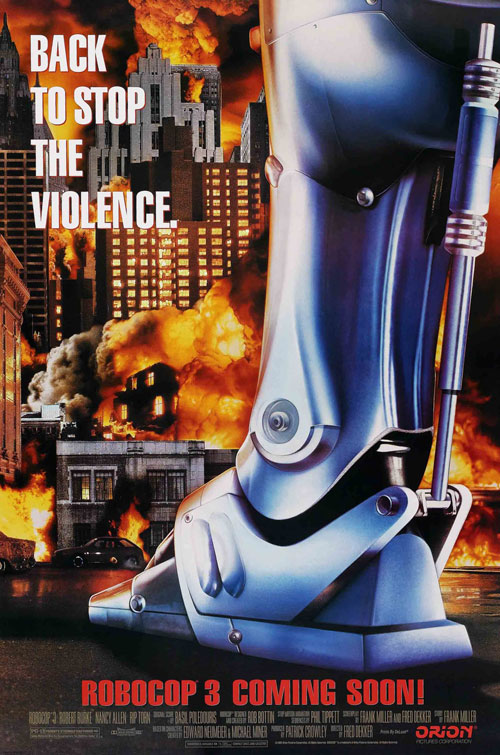 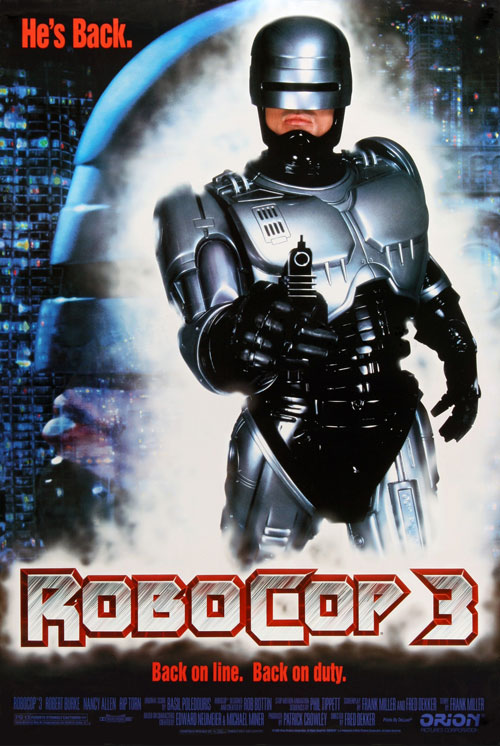 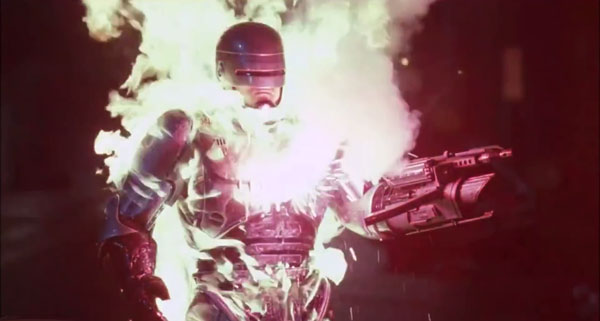