Perhaps the most distressing part of The Lost City, a Romancing the Stone riff that appears to have been packaged by the Hollywood equivalent of a processed cheese plant lacking its primary ingredient (that would be additives), is the possibility that Daniel Radcliffe is the only viable actor left standing in Tinseltown. That’s if the suggestions at least two of the performers here – Sandra Bullock and Brad Pitt – are deep faked in some way, shape or form, and the other name – Channing Tatum – is serving hard atonement time. If the latter’s choices generally weren’t so abysmal and his talent in arears, I’d assume that was the only explanation for him showing up in this dreck.

Loretta: You brought a scented candle into the jungle?

Whatever the veracity of such scuttlebutt, The Lost City appears to have been intentionally designed to test the patience of even the least-jaded, most ardent devotee of production-line remakes, sequels and focus-tested fare. It may not be a sequel, but if feels like one, and a cheap cash-in one at that. If they were going to make a movie largely on soundstages and render their leads looking at least ten years younger than they are (Bullock is 57 and Pitt is 58, or they were), why not just go the whole hog and de-age Kathleen Turner and Michael Douglas for that long-awaited third Romancing movie (variously The Crimson Eagle/ Racing the Monsoon)? And yes, I know it says they shot in the Dominican Republic, but directors Aaron and Adam Nee, in concert with David Leitch’s cinematographer Jonathan Sela (so familiar with all that rigorous effects work) offer four-square TV-production values, and whenever there’s a vista-vision long shot, it looks like it was conjured by a budget-conscious effects house.

Alan: Don’t do mean stuff on a bike.

If it’s the case that Hollywood is making productions with avatars of now hauled-off celebs (see Guantanamo Hanks in various upcoming productions), it certainly fits that Bullock and Pitt’s next – released, but shot first – movie Money Train is also with cinematographer Sela (and director Leitch). In contrast to Bullock who has said – conveniently – “I’m not retiring, just going to not spend time in front of the camera for a while” (see also Jim Carrey), Pitt’s a busy beaver, meanwhile, with Babylon and a pairing with Guantanamo-friendly George Clooney scheduled.*

Audience Member: Can you rip off Dash’s shirt?

Such alleged disparity between truth and perception is, in its own cack-handed way, a theme of the movie. Popular rumour holds that if anyone – as opposed to simply everyone – in Hollywood is inverted, it’s Bullock (per her allusive surname), who hails from a military family and had a German rocket scientist for a grandpops. Here, her romance-adventure novel author Loretta Sage is being packaged as someone she isn’t at the outset; Patti Harrison’s Allison has been employed as her social media manager and is immediately interacting as Loretta (“You have to remind the fans why they love you so much”). And then there’s the bit of business with Loretta’s sheer glitter jumpsuit, focusing on her crotch as if we’re in a Carry On (she’s instructed “don’t touch it” – her “wedgie” – and “Get it out now, cos you can’t do that on stage”).

Loretta: You do know you’re not Dash, right?

No one’s likely to mistake Tatum for a rocket scientist (unlike Bullock’s grandpops), so he makes for a fairly plausible lumbering narcissist; at its most basic level, though, the movie is presenting Alan Caprison as a (near) complete antithesis of his swoonsome fictional alter-ego Dash McMahon (Alan is a cover model for Loretta’s fictional hero). He’s inept and ill-prepared for any heroic encounters, yet he will still reprimand Loretta for dismissing her novels as “schlock” as it disrespects the fans: “I imagine you of all people would know not to judge a book by its cover” he tells Loretta. Or should that be Bullock? Who also tells him “I am a woman. I can’t mansplain anything”.

Abigail: You have a hamster’s asshole?

Elsewhere, Radcliffe shows up as billionaire Abigail Fairfax; his conviction that “It’s a gender-neutral name” (like his brother Leslie) at least seems to be taking the piss. Radcliffe is woeful, as he is in everything (sorry, Harry Potter fans), and the idea that he’d be a good fit for the lead in Weird: The Al Yankovic Story is… boggling. There’s admittedly a decent joke at his expense, courtesy of Da’Vine Joy Randolph (as Loretta’s publicist Beth): “I thought he was a little boy, but he has a full beard”. So Radcliffe may be a good sport, but he’s far from a great thesp.

Loretta: Why are you so handsome?
Jack: My dad was a weatherman.

The above is also a rare good line too; Pitt comes on with Legends of the Fall hair, and the (decent) gag of his super-skilled action guy, former Navy SEAL and CIA man Jack Trainer – also Harrison Ford’s character in Working Girl – having his brains inopportunely blown out is rather soured by his return in an end-credits cameo where he professes his survival is down to our using only ten percent of our brains (“Naturally, I have some anger issues”).

Loretta: Did you say shortcut through the jungle?

Trainer makes some allusions to Elite practices of the Dangerous Game/The Hunt/kind of thing that goes on at the estates of Belgian royals: “Doesn’t sound like a ransom scenario. Unless it’s blood sport, Hunger Games situation. Possibly some dark web, coke-fuelled stuff. Real clown shit”. As opposed simply to “Weird sex stuff like Taken”. Trainer also requests payment in cryptocurrency, so we’re pretty up-to-date and relevant.

Allison: History had a lot of nudity.

Furthering the theme of artifice, Loretta’s novels are accused of representing “fake history at its worst”. She objects to this, as she only resorted to romance fiction when her serious work on “Spanish colonisation in the Atlantic” was rejected; this is still “Real history with a bit more nudity”. Her actual research – as presented in The Crown of Fire – results in her kidnapping by Abigail, who “found the city on a forgotten island in the middle of the Atlantic” (obviously such details are common to the treasure hunt genre, but nevertheless pertinent in terms of forgotten/stolen/rewritten history). Abigail has a “passion for hidden things in the world” (as doubtless do all elite billionaires) but is disappointed to discover Kalman’s Tomb reveals no great score: “It’s a hiding place for a grieving woman”.

Loretta: It’s kind of like picking anchovies off a Caesar salad.

Seth Gordon lives up to his rank resumé (Four Christmases and Identity Thief are among his milestones), although the Nees and Orien Uziel (nothing good) and Dana Fox (Cruella, which was decent, to be fair) are awarded screenplay credit. This was titled the slightly less flavourless The Lost City of D originally, a riff on The Lost City of Z (which was produced by Pitt’s production company, with Pitt originally set to star). Occasional amusing lines can’t make up for the pervading vacuum of inspiration. Heights of “hilarity” included a sequence involving leeches and Tatum’s butt, or his butt double’s (“Why do they go for the butts so much?”) Alan’s profound denseness – “You could be visiting Ancient Greece” he suggests, and later references Gloria “Seinfeld” – makes the intimation of actual romance at the end rather nonsensical (it would be less so, had original choice Ryan Reynolds been available). Pulp-steam line “The hot lava pulsing from his–” invokes Naked Gun 2½: The Smell of Fear, but less deliriously. “Are you the one who’s been emailing me for photos of my feet?” may be a poke at Tarantino. Or maybe not.

Loretta: I’m in a glitter straightjacket.

The Lost City can comfortably rub shoulders – or leech-infested buttocks – with another of the year’s deep-fake virtual world movies Death on the Nile, any hint of the exotic buried beneath a digital veneer and reliance on soundstages over locations. It also carries a similar lustre to last year’s archaeological-action-comedy-treasure-hunt-romance extravaganza Jungle Cruise. Which is none at all.

*Addendum 05/09/22: While I’ve emphasised avatars here, feel free to mix and match doubles and clones (with the emphasis on doubles) 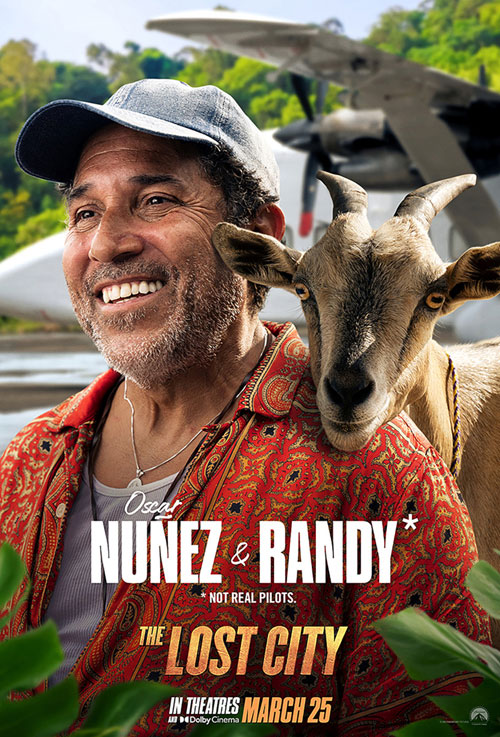