You can go back to your pies now, Mildred. We’re through.

Is Mildred Pierce really a film noir? Sure, its framing device revolves around murder, and there’s crime – it’s adapted from a 1941 James Cain novel, after all – and requisite black-and-white cinematography, but at its core, this is really melodrama. The picture’s genre specifics are evidently a well-thumbed subject for discussion, so I’m rather late to the table on that score. All I know for certain is, there’s only so much of Veda (Ann Blyth) being a right little spoiled cow to pushover mum Mildred (Joan Crawford) I can take before I’m longing for Bogey to show up and slap the little madam about a bit or stop her permanently with a slug from a .45.

The opening, though, as Mildred attempts to land duplicitous, money-loving business partner Wally (Jack Carson) in it for the murder of husband Monte (Zachary Scott), is steeped in noirish tones. Director Michael Curtiz was, of course, a dab-hand genre gadfly, holding no particular affinity for such pictures, but eminently adaptable. Indeed, one might argue the opening sequence sets us up for a movie Mildred Pierce entirely fails to be, particularly when one of the least convincing police “interrogations” ever begins (from Moroni Olsen’s Inspector Peterson). You’ll almost believe you’ve wandered into a z-grade B movie. “Detectives have souls the same as everyone else” he tells Mildred, about to launch into an obligingly detailed account of her life. It seems he’s ahead of her every step of the way, such that he knows she’s hiding identity of the true culprit, Veda, but the way it plays, you’d think Ed Wood was feeding Olsen his lines.

Cain had no murder in the novel – something emulated by Todd Haynes, a martyr to melodrama, in his 2011 HBO version – and Veda received no prison sentence; it appears her fate was predominately down to the censorship code (due punishment must be evidenced). Conversely, however, such dark deeds add an undeniable structural frisson, however blandly Oscar-nominated screenwriter Ranald MacDougall threads together the mechanics (it seems William Faulkner did a rewrite, between or during bottles).

What struck me most this time was how under-fuelled Crawford’s lead is in terms of iconic stature. Particularly given she was the only one – the movie received six Oscar nominations including Best Picture – to walk off with a statuette. Part of it might simply be the character she’s saddled with: an absurdly slavish seeker of validation from an extraordinarily obnoxious daughter who despises her, yet somehow savvy in other walks of life, rejecting useless husbands – well, until she fickly decides he was okay, really – and showing immense business can-do thanks to her culinary flair.

It might also be Crawford herself. Her Oscar win, per Anthony Holden’s The Secret History of Hollywood’s Academy Awards, was as much down to the apocryphal conjuring of the press and gossip merchants as legitimate admiration for her performance. As Holden tells it, considerable juicing of her award chances went on, such that she was concerned over the ridicule awaiting her, should it be discovered she had a “press agent plugging her for an Academy Award” before the production had even finished filming.

Crawford had been high and dry, career-wise, for about a decade when the role came along. It was one she lobbied for, but not to Curtiz’ initial acquiescence (“Me direct that temperamental bitch? Not on your goddam life!”) MGM had dropped her, and the director wondered “Why should I waste my time directing a has-been” with her “goddam shoulder pads”. Stories conflict and confabulate. Some say he became a convert during filming, and she presented him with some conciliatory shoulder pads at the end of filming. Others referenced monumental clashes and accusations of “Phoney Joanie” and “rotten bitch”. When it came to Oscar night, she faked pneumonia to justify her absence (like Vera’s pregnancy, then).

Curtiz does his best to make Crawford look attractive, rather than like Mr Ed, but she nevertheless gives off a steelier, more testosterone-fuelled vibe than any of her male co-stars. And yet, Blyth is much more indelible, as one of the least-likeable movie characters this side of a horror flick. Scott is also strong as the smooth heel who dallies with both Mildred and her daughter. Carson only ever seems like he’s playing a wise guy, so the snappy dialogue he’s served – “There’s something about the sound of my own voice that fascinates me” – often fails to land as effectively as it should (he also seems to be an all-purpose fit for whatever use the plot wants to put his character to next). Eve Arden is great (and has great delivery) as the former employer who goes to work for Mildred, reliably firing off quick one-liners.

The most extraordinary dialogue is saved for the machinations of Veda, though, far more dangerous than any hand gun. “I wouldn’t be seen dead in this rag” she says of a dress her mother’s hard-earned has bought her. Later, she gives mom’s work uniform to the godawful high-pitched maid (Butterfly McQueen) as an act of spite. “My mother, a waitress” she seethes contemptuously. “Complimenting” Ida, she suggests “You’re so delightfully provincial”. She’s a truly awful, irredeemable specimen – “a rotten little tramp” – even when admitting to her own character defects.

We’re supposed to sympathise with Mildred, I think, but it’s impossible to be entirely on board with someone who so wilfully lets herself be walked over, who neglects her youngest (who dies of the quickest bout of pneumonia ever) and throws away all her hard-earned success to support her surviving daughter’s whims.

Time Out’s Phil Hardy had Mildred Pierce as a sage indictment of then mores (“In a patriarchal society, when a woman steps out of the house, the results may be disastrous”), but that may give it too much credit, and rather ignores its prevailing, mother-daughter causative dynamic. Pauline Kael appeared unpersuaded by its rep, finding time to take a poke at its lead (“Miss Crawford’s heavy breathing was certified as acting when she won an Academy Award for her performance here”).

Mildred Pierce was a big hit, and its reputation as one of the definitive noirs has been sustained through the years, but I don’t think it’s quite all that. Certainly not in comparison to other, more deserving pictures – many of them noirs to boot – that have been rather obscured by the mists of time. 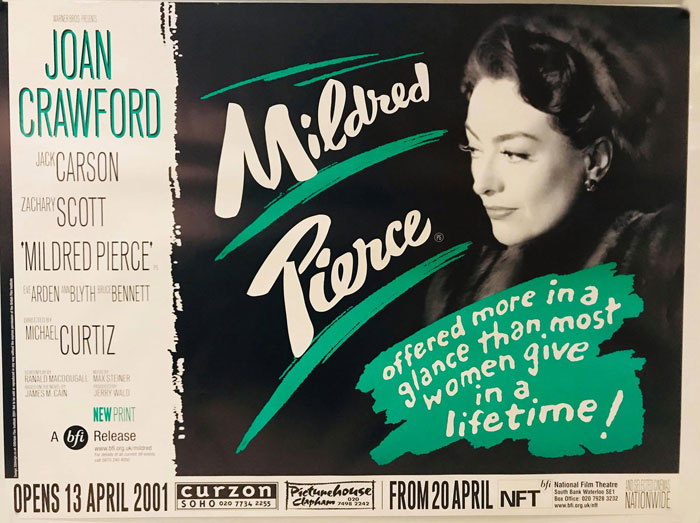