Would concatenation be the word for which you are groping, sir?

Jeeves and Wooster
4.3: Bridegroom Wanted
aka Honoria Glossop Turns Up

Another one where Clive Exton is out to prove he can be whackier than anything that pedestrian so-called talent Wodehouse could proffer. For the most part, this is a reasonable adaptation of Bingo and the Little Woman, but key moments – and notably the ending, which seems to be invoking Hitch-Hiker’s Guide to the Galaxy – offer the missing link between earlier Wodehouse and the farting and crapping of the dreadful Blandings series too few years back.

Exton is once again mashing stories together, with the added requirements of transatlantic telling – The relocation of UK plots to the US has long-since become exceedingly annoying by this point – and adjustments for other alterations and inventions the series has made to the stories on the page. Bingo and the Little Woman comprised two chapters of a number of Bingo related episodes in The Inimitable Jeeves (one chapter of that title and the other All’s Well). The series earlier kicked off the Rosie M Banks saga at the end of Season 2 (using Chapters 1 and 2 of the collection) and last visited Bingo at the end of Season 3 (11 & 12 of the same; 5-8 of the collection were used up in the first episode, and 14 in 1.4 & 1.5).

The Rosie M Banks ruse, earlier summoned for Bingo’s benefit, comes back to bite Bertie here, when Little falls for a waitress who turns out to be Rosie (she’s researching material, don’t you know); the usual in-roads to Lord Bittlesham at Bingo’s behest are required of Wooster (who presents an “autographed” copy of The Woman Who Brave All to the Lord), first in relation to his allowance and then to his impulsive marriage.

As changes go, it’s entirely understandable dramatically (and comedically) that Exton should stage the reveal of Rosie’s true identity in Bertie’s presence (in the novel, Bingo reports this to Bertie); in both, Bertie is rather in the soup, what, with both Rosie and Lord B. The story’s ending is completely excised, replaced with the twaddle we got (Jeeves tells Bingo to tell Lord Bittlesham that Bertie is a loony, confirmed by Glossop). The other major addition is that, to dovetail it with the Glossop plot, Bittlesham is being worked on with a special diet. An Exton special diet.

That’s where Jeeves and the Greasy Bird (from Plum Pie), originally published in 1965, comes in. Glossop, due to earlier changes from the PG source, is a divorcee, and he’s engaged to Myrtle, Lady Chuffnell; Myrtle is Mrs Snap in the episode (he will marry Myrtle in the original, whereas Mrs Snap will sight her errant husband Jas Waterbury in the episode, much to Glossop’s relief as she has become extremely demanding re alcohol at meals and forcing him to wear tartan socks with striped trousers).

There’s common business in respect of Bertie trying to make Blair Eggleston – a writer in the story, rather than a doctor – jealous enough to propose to Honoria (this meaning Mrs Snap will agree to marrying Roderick); naturally, this goes awry and Honoria ends up engaged to Bertie. There’s no Blair punching Bertie up the bracket, but there is the ruse of employing Trixie to pose as his fiancé, a ruse that backfires when her agent (her uncle in the story, and main squeeze in the episode) Waterbury tries to take Bertie to the cleaners with a breach of promise suit. In the story, this is defused by Jeeves persuading him that Bertie is broke.

Bertie: Eight and a half months without a drink.

Aunt Dahlia’s in the story, but there’s nary a sniff of her in the episode. The biggest change is probably the farcical convergence of the episode’s ending, as all parties – Jeeves and Wooster, Glossop and Snap, Bingo and Rosie, Jas, Trixie and muscle Porky Jupp – converge on the ship bound for London. Which culminates in them converging on Bertie. Upon which, he and Jeeves leap over the side to escape, fetching up back in England eight-and-a-half months later. I don’t know. I mean Exton can have Jeeves and Wooster land on the Moon if he wants to, employing roughly facsimile dialogue and mannerisms to the novels, but that doesn’t mean Wodehouse would have countenanced such a thing. It’s a step too far.

There are other issues too. I like Locke as an actor – Vargas in Thunderball, Arnold of Todi in The Box of Delights and Bigon in Four to Doomsday – but his Glossop is much too amenable. Even as the version now getting on with Bertie – traced back to the end of Season 2, halcyon days of the series compared to this – there needs to be some hint of the authoritarian Roger Brierly brought to bear on the eminent looney Doctor. There’s zero trace of Emsworth’s description of an unpleasant boy with a nasty and superior manner in his performance. This Sir Roderick Glossop just seems like an overly affable uncle and not at all serious minded. I’m also not keen on the rather vulgar explanation for Glossop being single again – having married the widower for the show, they then summarily dispatch his wife off screen – by claiming she “eloped with the conductor who befriended her on the 73 omnibus”. And then there’s the looney Doctor having retconned himself as a dietician, announced in similar kind of absurdist tones to the ship-absconding conclusion (the “patient will eventually revolt at the sheer immoderation of it”).

Liz Kettle adds consistency to her jolly hoo-ra Honoria in her third and final appearance; she has a good line in making the character seem genuinely amused at Bertie’s antics (Laurie seems amused at her amusement too). Geoffrey Toone likewise has a hattrick of Bittleshams, and this is also his final appearance in the series; he’s good value. Pip Torens less so; he makes it a second go-round as Bingo, following Season 3’s Comrade Bingo; on this evidence, I very much prefer Michael Siberry’s original, as there’s a vague feeling that Torens’ version is simply rather unpleasant.

4.3 is watchable enough; the plot threads are engaging, and there’s even a “Jeeves is disapproving of an item of apparel” thrown in (the straw hat). But this is an episode with a WHIZZ across the room CARTOON effect as Bertie is biffed by Blair, as if anticipating the cinema of Stephen Chow. It’s something not quite right, basically. Exton is increasingly missing something vital to his source material. A concatenation might be the word for which I’m groping. 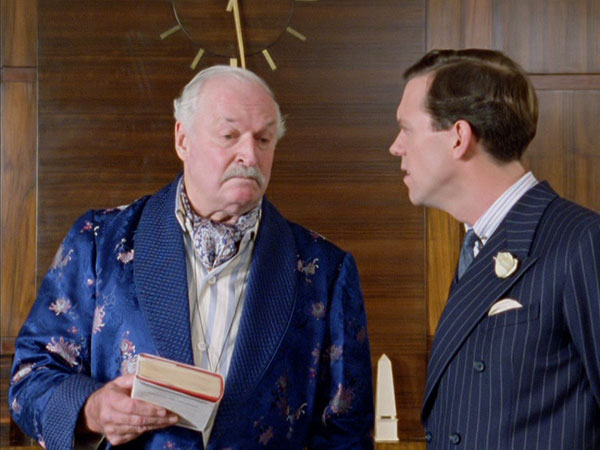 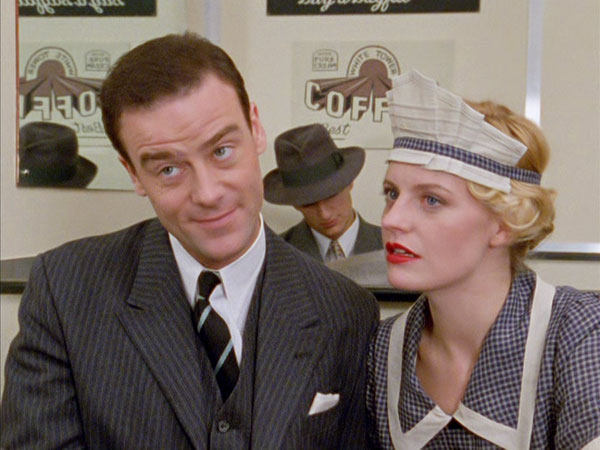 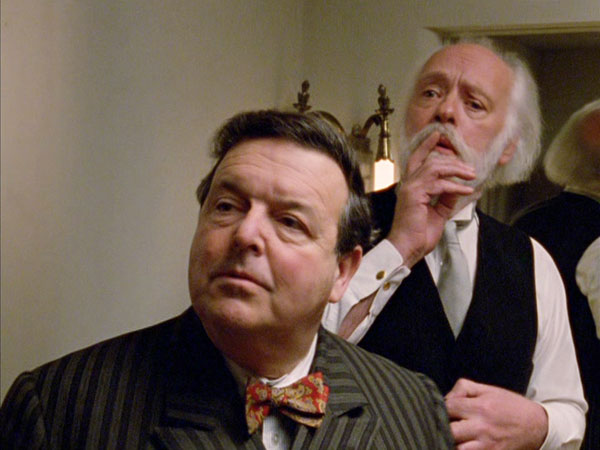 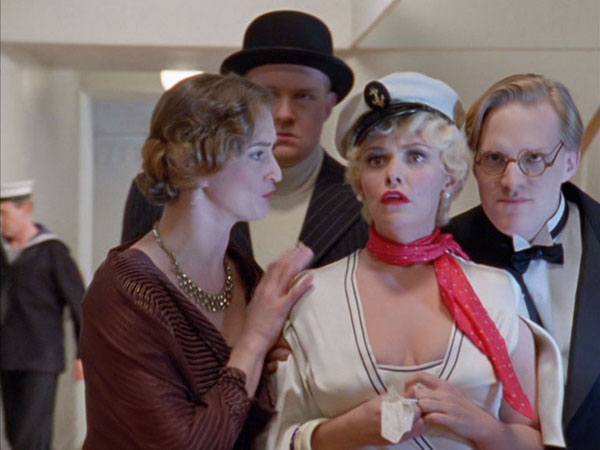 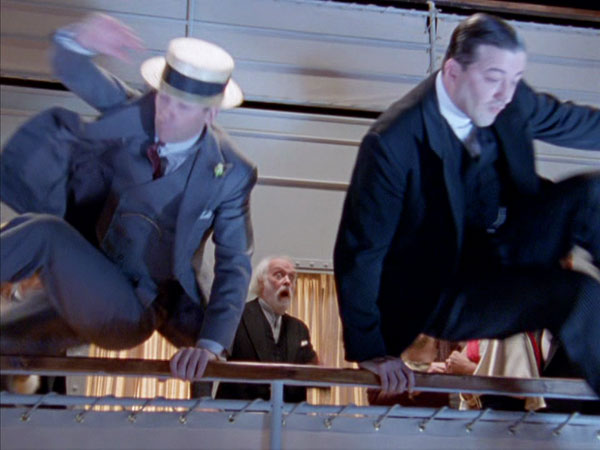 Jeeves and the Greasy Bird (Plum Pie) originally 1965 (in Playboy!)
Bingo and the Little Woman (The Inimitable Jeeves, Chapter 11) 1922