Without my armour, I’m less persuasive.

The Book of Boba Fett
Season 1

What a dog’s – or bantha’s – dinner. In other words, Jedi poodoo. I think I preferred Boba when he was a fatty. If there’s one good reason to wait until a Disney+ series is over before watching it, it’s this; the rises and falls in anticipation (particularly following The Mandalorian Season 2) just aren’t worth it. Not when all hopes are dashed as resoundingly as they were in The Book of Boba Fett Chapter 7: In the Name of Honor. And that’s after four underwhelming episodes of the title character posing as a lacklustre crime lord/Daimyo, outings that undermine his credibility almost as much as clumsily falling into the Sarlacc Pit did, and two swap-in instalments planned for The Mandalorian Season Three that cumulatively unwind and incapacitate that character’s journey.

By most accounts, Temuera Morrison has a pretty good take on who Boba Fett should be – taciturn, helmeted – so I’m conditionally willing to give him a pass on being a beefy type with none of the fleetness of Jeremy Bulloch. A dead ringer for Dengar, Fett not so much. It isn’t his fault Disney – and Favs, and Filoni, and who knows, Kennedy too, since all these reports of her effective banishment from Lucasfilm seem to have something of an apocryphal quality – have undermined him in ways antithetical to how they (mostly) ensured Mando succeeded (hitherto). It seems like a duff move in the first place to have Boba take over from Jabba (well, Bib). You wanted him to move on, such that we never really see him doing what every fan longed to see him doing (being a bounty hunter)? Then do it in a way that gives him some cachet or badass-ness. An iota of respect.

This Boba entirely doesn’t convince as a crime lord – or Daimyo – as he’s got no muscle and no willingness to make tough choices. He seems to be singularly disabused of any qualities that would testify to his status as a force to be reckoned with, backing down from taking a hard-line stance in almost every encounter (except when it comes to his beloved Tuskans, when he’s shown to have been in error) and forever in and out of his bacta pod. “Living with the Tuskans has made you soft” (Chapter 4: The Gathering Storm) may be a reflection of his character “arc”, but it as much seems to be covering bases as recognition of the abuse the writers know neutering Fett will garner. The worst of this occurs in the same episode, when he calls a meeting to present fellow Daimyos with an ultimatum. They all turn him down, and his response is utterly ineffectual (“All I ask is that you remain neutral”). When he is called out with “No one respects you” (Chapter 3: The Streets of Mos Espa), you have to concur, but apply it to his series as a whole.

It’s no wonder that, come Chapter 7, even dreadful Mods – the kind of characters even an original run Marvel comic strip, towards the end, when they were taking a downturn, would have vetoed – are dissing him. The hover-vespa riding cyborgs led by Drash (Sophie Thatcher) and Skad (Jordan Bolger)) call Boba out on his rubbish battle strategy. Some have suggested they’re Kathleen Kennedy characters. I don’t know; they’re certainly appallingly conceived, written, designed and acted, so quite possibly. Design-wise generally, though, when the series isn’t sticking closely to the original or EU – the Rancor and Cad Bane are great – it’s tending to slip up (the Gamorreans look rather silly without Return of the Jedi girth; the Tuskans are much too clean-pressed and un-shabby, their duds evidently coming straight out of the Tatooine laundromat).

There’s very little here that succeeds on its own terms. The rancor is nicely realised (as is having Danny Rejo as its trainer), but it being a gift from the Hutts makes no sense, other than to position it as a rancor ex machina for the final chapter. Even given the tenuous idea of Boba acting as Daimyo, there’s next to no sense of how he enforces and legislates, particularly when his best idea for muscle is employing cyborg bikers. Fennec is still occasionally shown to be kick ass (the final assassination, which should have happened episodes before), but her loyalty is undermined by supporting a useless boss who saw fit to fill her full of robot innards (I mean, thanks a lot). The flashbacks are generally rotten too. Who needs Dances with Tuskans?

It’s unsurprising, then, that someone decided “Sod this” little more than halfway through the run and brought back Mando. Which, if nothing else, lets us in on the realisation that series was also going to turn to complete suckage. Someone, somewhere, issued an edict that, despite everything about the show’s initial arc being dedicated to the growth of its character(s) and leading to Mando delivering Grogu to train as a Jedi, this should now be entirely recanted. Toy sales? A dearth of inspiration? A desire to revisit super-popular deep-fake Luke? All that and less.

Fan rumour was that Grogu would be spearheading a retconning of sequel trilogy canon, overwriting the reign of the dragon Queen Kathleen. I suspect most nursed doubts something so radical would feasibly come to pass (at least, so soon, before the dust of half a decade or more had settled). But if Grogu being trained was never going to happen, it can only represent cynical fan baiting on the part of Favs and Filoni. If it was, and Favs and Filoni were so drastically overruled, well surely they’d walk if they had an ounce of integrity? Even if we’re destined for a backtrack in the fulness of time, there’s still the garbled mess of Mando’s arc being for nothing, revisiting Grogu on an unmerited whim (with some dinky chainmail) and Luke, presumably, just messing with the kid’s head (“Sometimes, I wonder if his heart is in it”).

As it goes, Chapter 5: Return of the Mandalorian, the Boba-free episode directed by little Ronnie’s daughter, and featuring a Mando duel for the darksabre and building a new Mando ship, counts as the best of the season. But it’s nevertheless laying the groundwork for Chapter 6: From the Desert Comes a Stranger, an ungainly beast with the (rather good) virtual Luke and Grogu failing to meet Mando, who shows up just when Ahsoka has rocked up too. Credited to Favs and Filoni, so there’s really no excuse for the sloppiness. Indeed, the best part has Cad Bane arriving at Freetown (it’s funny but also illustrative that, perfect as he is as US Marshall Waylon Givens, Timothy Olyphant isn’t such a good fit transposed to the Star Wars universe).

Chapter 7 is straight-up awful, though. The plotting is drivel, the action laughable. The scenarios are akin to Saturday morning TV, with an apparent (non-FX) budget to match (when the forces of Freetown arrive, it’s about six people). There’s a scene in there, it seems, simply to give the show a pass in the Bechdel Test. The Rancor effects are pretty good, and the King Kong homage agreeable enough, but the business with Scorpenek droids simply goes on for too long, and the entire sequence is evidently filler for doing something, anything, interesting with the episode. It had been rumoured for a while that Han and Chewie were set to appear, but the realisation that Chapter 7 was terrible, and maybe the need for hefty reshoots, led to their being cut. In which case, that’s about the one sensible move here.

This episode successfully navigates the audience from finding Grogu adorable to regarding him as a detestable encumbrance, a lazy back stop by which having him totter about and do some force-adept cuteness is seen as sufficient distraction from the absence of anything that will remotely benefit the plot. I’m not invested enough in Star Wars to have been rooting for the sequel trilogy to be retconned out of existence, but I do have the basic expectation that professional writers – as opposed to professional fans (Favs and Filoni, it seems) or professional merchandisers (Disney) or professional wokesters (Kennedy) – should be able to observe restraint towards, and reverence for, the storytelling. And it’s no excuse to suggest this goes on elsewhere (the more-more approach of, say, nu-Who, where the likes of Moff or RTD could never really say goodbye to anything and felt obliged to drag it into the dirt ad nauseum). Just because others aren’t passing muster doesn’t make it any less unforgiveable.

But really, this shouldn’t be a surprise. Most were astounded The Mandalorian was as decent as it was (which inevitably led to overstating its achievements in some quarters). We were only ever glass half full. The Book of Boba Fett was, at best, two-thirds empty. 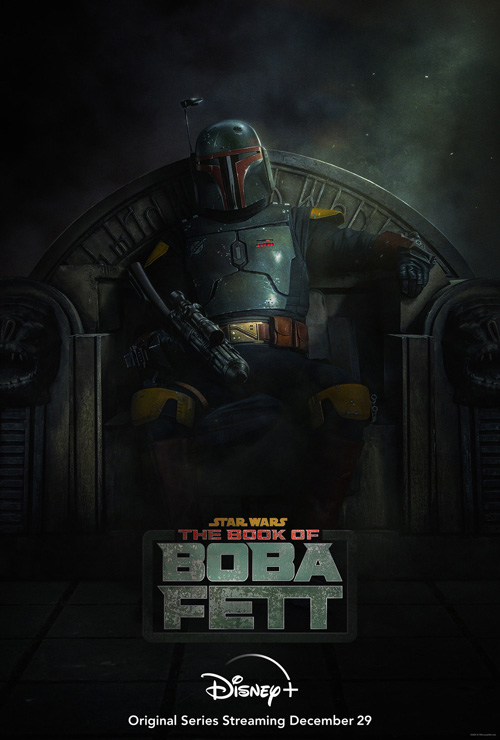