Doctor Who
The Time Monster

Fifty years of The Time Monster. A cause for celebration? With no prior experience of the story, one might have been conditioned by The Discontinuity Guide’s perverse smackdown: “Like watching paint dry while being whipped with barbed wire: immensely dull and painful at the same time”. Of course, ripping the Pertwee era a new hole circa the mid-90s was very fashionable – Paul Cornell, the movement’s chief architect, was one of the book’s three authors – and you can find similarly jaundiced responses towards stories in the latter four Pertwee seasons, not least its predecessor The Mutants. Both bombardments are somewhat over the top, which is not to suggest the stories don’t have their problems. In The Time Monster’s case, its faults are particularly exacerbated by Paul Bernard’s unenthused direction.

I can quite happily argue The Mutants is underrated. I can’t genuinely suggest the same of The Time Monster. Or even plausibly present the case – to its deniers – that it’s half decent. It’s wonky, often dull, incredibly creaky, and leaves its potential largely unfulfilled (there are some very good ideas in here, a number of them nicked by Chris Bidmead, partial to plundering Letts and Sloman, a few years later). But awful? Painful? No, I won’t have that.

Jo: A real pippin of a dream.

Elizabeth Sandifer attempted to see the story’s positives while singling out the performers for a slating (“The acting is some of the worst in Doctor Who’s history”). She makes a good case for the thematic levels on which the script is operating. The problem, however, is that many of them collapse at the first hurdle, because there’s no sense of sense of smarts in either the execution or acting. Paul Bernard may have been a rung up from Ron Jones as a visualist, but he’s all at sea conceptualising how best to realise the script. Hence, great flapping birds. One can but imagine the triptastic masterpiece Michael Ferguson would have made of The Time Monster; it needed a flashy stylist to boost its often rather flashy approach to ideas and storytelling (Episode One’s dream would surely have been an actual pippin under Ferguson); Sloman and Letts throw stuff in there mostly because it’s cool – or groovy – rather than because its coherent. The consequence is that The Time Monster comes a distant fourth when ranking their season finales.

Ruth: You mean, it’s a ridiculous piece of modern art.

I don’t agree the acting is some of the worst in Doctor Who’s history, but I will admit that, across the board, it’s some of the least engaged acting from a guest cast. Okay, that’s not quite fair. Ian Collier makes a decent stab at playing a ringer for the 118 Directory runners, while Wanda Moore’s militant feminist Ruth Ingram amusingly finds Uncle Terrance at his most reactionary (“Why are your men so spineless?”; “May God bless the good ship women’s lib and all who sail in her”). No one else here is much cop, though, be it King Dalios (George Cormack), Krasis (Donald Eccles), Hippias (Aidan Murphy doing his best Marc Bolan impression), Lakis (Susan Penhaligon) or the Minotaur (Dave Prowse, who probably would have roared with a West Country accent if they’d let him). Ingrid Pitt is rubbish, of course, but she was in no way employed for her performance skills, as her costume diligently reflects.

The Master: Do you think I’m going to dance to the Doctor’s tune like some performing poodle?

This malaise infects the regulars too. This is, by some measure, the least worthwhile Roger Delgado performance. Which means he’s quite watchable, but also that he’s considerably less smooth, unflustered and superior than usual. Even his much-vaunted wooing of Queen Galleia isn’t all it’s cracked up to be. All the things you dig his version for are in retreat. Katy Manning is given too many opportunities to act against “herself” and shows her limitations in that regard. Although, Jo’s spontaneous laughter in response to the Brigadier’s “Really, Doctor. You’ll be consulting the entrails of a sheep next” is possibly the best moment in the entire story (Courtney’s beat of amusement at her amusement is priceless too).

Benton: Sort of through the crack between now and now, sir.

Benton is transformed into a baby, which is a bonus, as the less John Levene “acting” there is in a story, the better for the rest of us. As for his birthday suit surprise at the end, well it’s Captain Jack all over again. Or before. The Brigadier is particularly dim in this one, called on to disbelieve the reports of his Number Two (“You HAVE been drinking!”). There’s precious little point being head of UNIT if you’re not at least willing to entertain out-of-the-ordinary occurrences actually occurring (Dana Scully must have been taking notes). It wouldn’t matter so much if the Brigadier’s response tapped genuine laughs – my usual excuse for enjoying thick Brig – but he just seems irrationally and pointlessly contrarian here. Albeit, all the time-shift material (knights and roundheads and doodlebugs) is desperately weak filler, feebly and laboriously delivered, and so deserving of the Brigadier’s complete disdain.

Percival: What, pray, is interstitial time?

All of which is fairly by the by, though. What irks with The Time Monster is that the bits that should be some of the series’ most memorable are only so-so thanks to Bernard’s disinclination – or inability – to add any spark, oomph or sense of engagement. It seems as if about half of Episode Three is taken up with Pertwee slo-mo running on gravel. And then there’s Episode Four, with the recursive qualities of the TARDIS within a TARDIS, something Peter Grimwade visualised incredibly well in Logopolis; here, the concept is treated so matter-of-factly, it’s borderline mundane.

Indeed, Episode Four should be the story’s highlight – in terms of ideas, it has the most going on – but instead, the substance rather falls to the last two episodes, where finally, after all that preamble, we arrive in Atlantis. Complete with the least convincing “exterior” set this side of a Ron Jones’ prehistoric Earth. This is a more persuasive Atlantis, design-wise, than The Underwater Menace, but conversely, it’s also much less fun (plus, Julia Smith was a much better director, whatever that story’s particular design, er, foibles may have done to help undermine her).

The Doctor: Strange place it is, too. A place that is no place. A dangerous place where creatures love beyond your wildest imagination. Kronovores, time eaters. They swallow a life as quickly as a boa constrictor can swallow a rabbit, fur and all.

Sloman and Letts’ take on Atlantis is, let’s face it, tragically pedestrian, given all the New Age bit possibilities they could have explored. Sure, we’ve got crystals (they liked their crystals). That aside, though, they’re thoroughly fixed on it being, or being part of, Crete. Complete with ionic columns and a half-bull/half-man (this aspect is interesting, since it’s presented in a specifically magical fashion, and no one seeks to explain it rationally). Some actual “Cretan jazz” might at least have mixed things up a bit. There’s nary a whiff of Edgar Cayce and his take that Atlantis extended from the Gulf of Mexico to Gibraltar, and certainly nothing of his favoured time period (this takes place in 1500BC, as opposed to 10,000 years before that). Obviously, you’d need a Roland Emmerich budget to do a Cayce version justice, whereas this one finds it hard enough going trying to match I, Claudius.

Ruth: Are you trying to tell us that the classical gods are real?

The Time Monster’s villain/big-bad element had its precedent with Azal and will later become a stock-in-trade with Sutekh and the like: an ancient god is revealed to be an advanced (alien) being, in this case Kronos the Chronovore. What are we supposed to make of Kronos’ assertion that “I’m beyond good and evil as you know it”? It would appear to suggest the embrace of moral relativism, of the kind the Doctor would instinctively reject (instead, he’s on a Colony in Space-esque obsequious kick, “Mighty Kronos, may I ask one last favour of you?”)

The Master: Absolute power forever! And no Doctor to ruin things for me.

It’s a popular New Age idea, but also one used to invalidate many traditionally upheld (ie Christian) baseline values. Indeed, Kronos wouldn’t be an altogether bad fit for the Gnostic Luciferian (and Nietzschean) cause, under which one may perceive shades of grey eroding moral absolutes as a means to enabling nefarious elites to sup blood in plain sight. If one so chooses. Classic Doctor Who, even at the point the Doctor – or an aspect of him – is revealed as evil, isn’t announced as someone to get behind. The problem really comes to the fore later, in his (her) nu-incarnations, where he’s acting like a minor deity but we’re clearly still supposed to see him as a hero, and pine after him/her, however frequently the writers call his position out. As with much of The Time Monster, I get the impression it’s a line Sloman and Letts threw in without any intention to explore its ramifications, further underlining the extent to which the story represents a missed opportunity.

And yet, I can’t entirely bring myself to write off The Time Monster. It gets rather fogbound during the early stages (Episodes Two and Three), but it does pick up. And the daisiest daisy scene is a doozy (another revisited by the Bidmead era, in State of Decay. Did Executive Producer Bazza have a word in his shell like, or was it just coincidence?) Sandifer tried to have it that “Parts of this abomination are excellent”. I wouldn’t go that far; it’s never either excellent nor an abomination, even with TOMTIT. Go, Kronos, go!

*Addendum 03/09/22: An additional alternative is that Atlantis didn’t fall at all, at all, but rather is still here, intentionally concealed from the corrupting influences of the greater Earth. 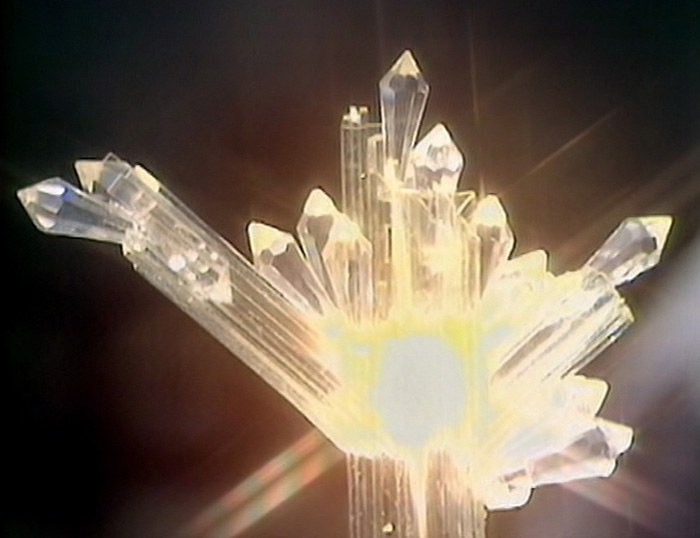 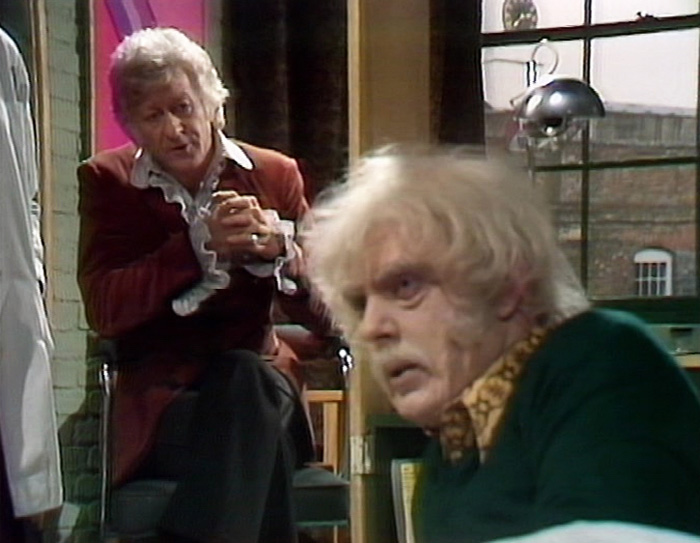 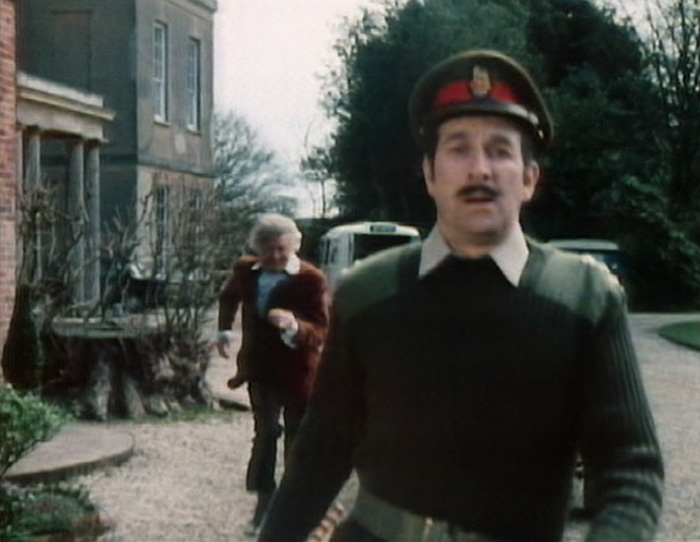 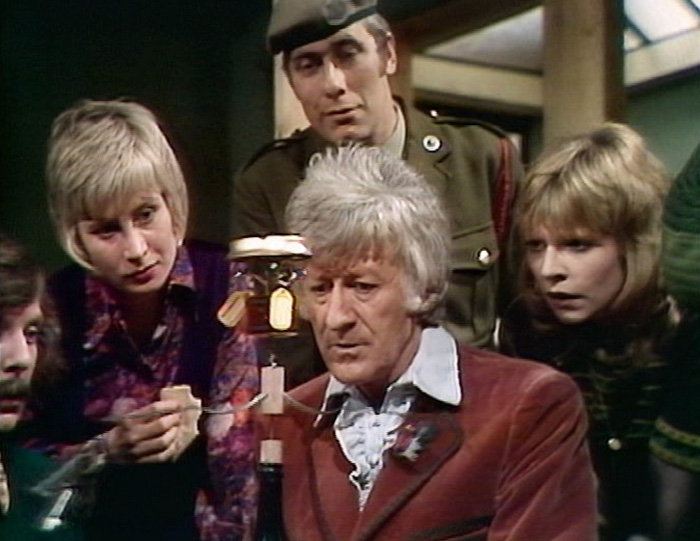 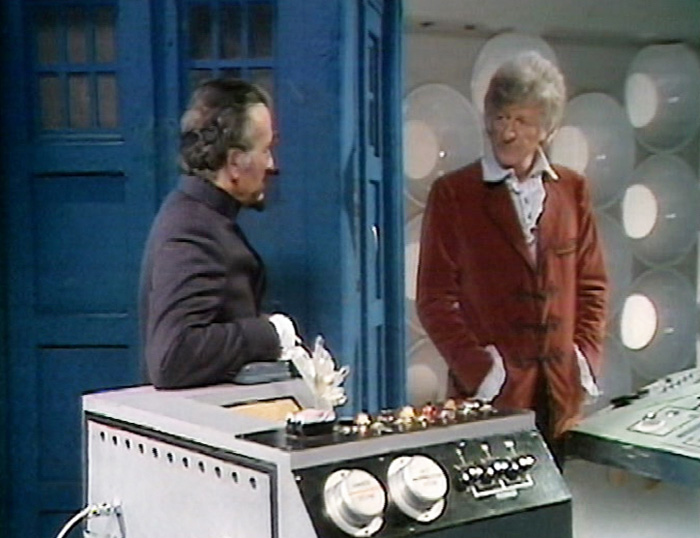 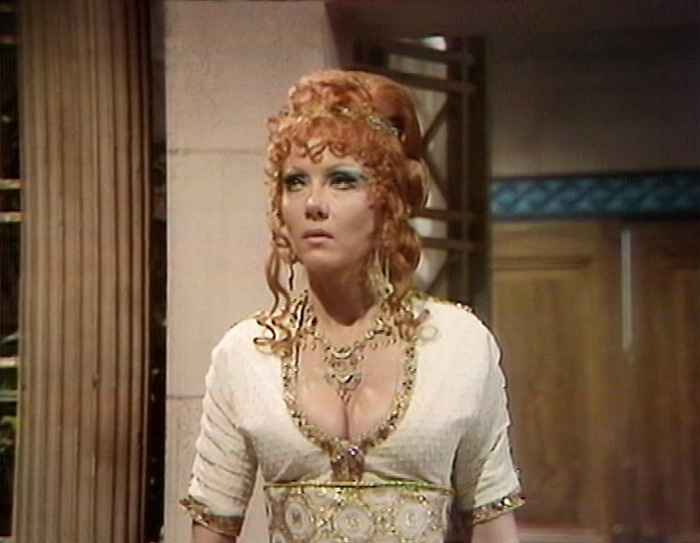 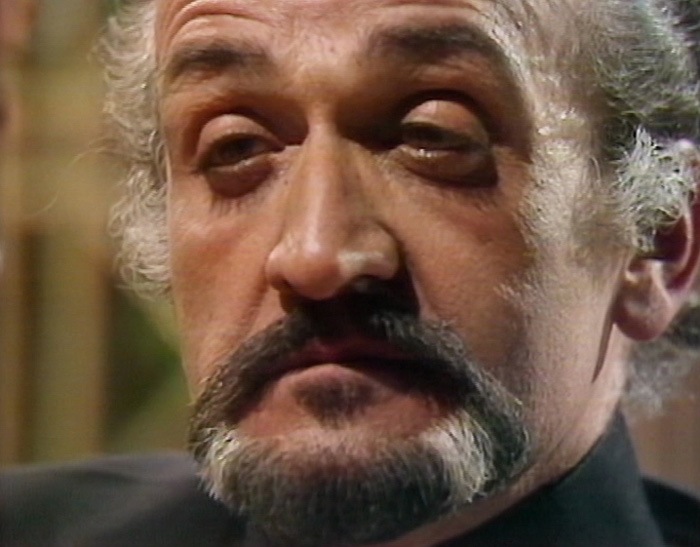 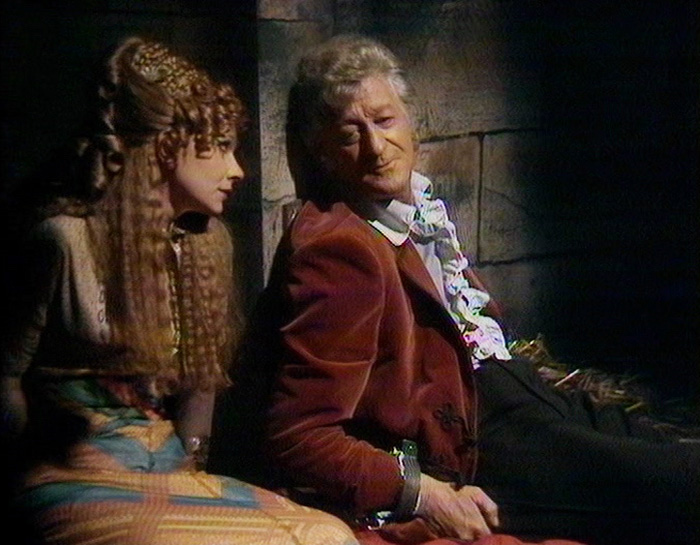 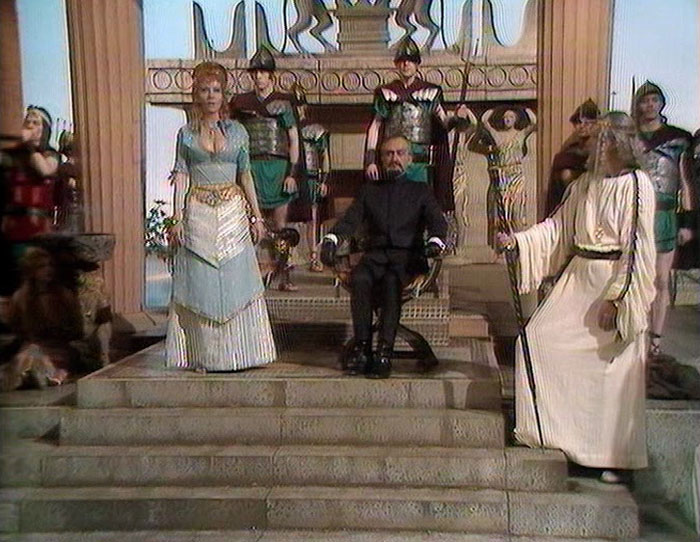 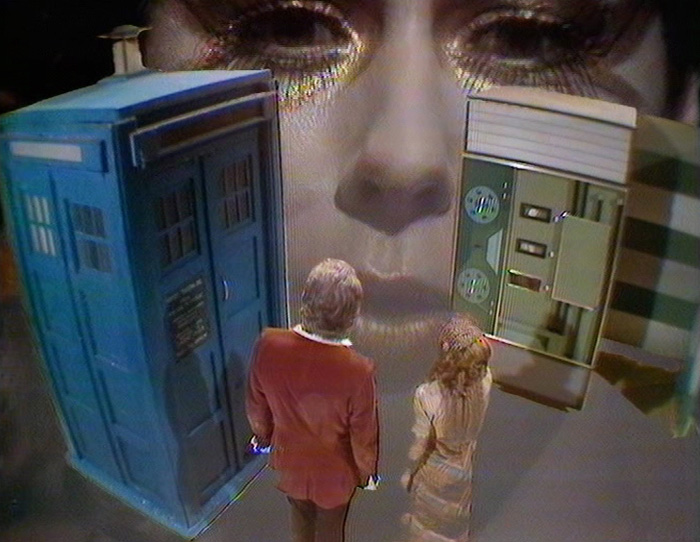