We’re not murderers, in spite of what this undertaker says.

I expect most people – among those aware The Godfather won the Best Picture Oscar, that is – assume it was the big winner that night. While it could indeed boast the top prize, Cabaret far and away exceeded it in trophy count, eight to the Don’s meagre three (Picture, Adapted Screenplay and Actor, the latter category one where Cabaret wasn’t competing). In those terms, The Godfather’s victory looks closer to a quirk of Spotlight proportions, despite sharing the year’s most nominations with Bob Fosse’s movie. Time and hindsight have shown the Academy got the main award right, but the cautious applause serves to emphasise that its now-hallowed status was anything but a foregone conclusion.

It’s easy to argue the ins and outs and seeming arbitrariness of awards night, of course. That, for example, Chinatown winning only one Oscar a few years later was only the case because The Godfather Part II was so strong. Anthony Holden noted of The Godfather “it had won no awards at all, and Cabaret six, by the time an astonished silence greeted the news that Bob Fosse had beaten Coppola to Best Director… Could Brando’s apparent intention to reject an Oscar [he had done so already at the Globes] have taken its toll?”

Some of the evening’s events are more logistically explicable; Paramount deigned that only Marlon Brando be considered for Best Actor (not an uncommon tenor of studio pitching, but Al Pacino was clearly the lead), so the film “boasted” three Best Supporting Actor nominees – Pacino, Robert Duvall, James Caan – and unsurprisingly, they only went and cancelled each other ought; Cabaret’s Joel Grey took the award (also at play might be the very point I just made: a reluctance to vote for an actor – Pacino – who had been politically manoeuvred into a category that didn’t fit). When Coppola belatedly scored Best Adapted Screenplay he commented “I was beginning to think I wasn’t going to get up here at all”.

Brando’s second Best Actor Oscar is almost as famous as the movie itself. He was still only 48 when he won (or declined the win), playing a jowly elder statesman (Duvall was forty at the time). Brando had Maria Cruz walk on as Sacheen Littlefeather – the compassion is entirely authentic, don’t you know – and refuse the award based on “the treatment of American Indians by the film industry”. Which caused apoplexy within the ranks. Responses varied according to hipness. Hanoi Jane “thought what he did was wonderful”. John Wayne believed he should have shown up and said his piece himself “if he had something to say”. Michael Caine felt similarly, never missing the chance to hold forth at or about awards, but also suggested “He should treat the Oscar with the respect it deserves”. Harvey Weinstein would later secure Caine his second Oscar by treating it with the respect it deserved (effectively buying it through a campaign blitz). Clint Eastwood, meanwhile, presented the subsequent Best Picture with an acidic “I don’t know if I should present this award on behalf of all the cowboys shot in John Ford westerns over the years”.

You can’t really qualify the stature of a picture like The Godfather. Some may have new takes on it – although, that’s going to be unlikely, and its fiftieth anniversary is instead an avalanche of repackaged material, anecdotes and reflections – but few will go against the grain and claim it isn’t all that. Simply because it undeniably is. I’m in the camp who finds the picture immensely impressive, engrossing, and admirably paced, produced and sustained. I don’t, however, love it. As captivating and consummate as I found it, it didn’t bowl me over the first time I saw it, and as much as I’ve found it similarly effective on subsequent revisits, it continues to elicit deep respect rather than passionate affirmation of its brilliance.

Brando’s mumblecore Don is a powerhouse, only eclipsed by Pacino’s expertly essayed journey from moral core (“That’s my family, Kay. It’s not me”) to corrupt perpetuator (“Do you think I’d make my sister a widow?”) Duvall, Caan and John Cazale furnish compelling encapsulations of types, even if you suspect Caan is so good at playing a hothead because he is a hothead (the scene where he goes to town on Gianni Russo’s Carlo with a dustbin lid always makes me chuckle). Coppola’s confidence and sureness of delivery is remarkable; the thirty-minute wedding opening unfolds with just the degree of purposefulness that could be mistaken for overly relaxed. The score is majestic, beautiful, a symphony of the ages; it’s this as much as anything that lends the film its scope as a saga.

If I were to find a flaw or two, I’d suggest Luca Brasi (Lenny Montana) doesn’t have the brains to convince anyone he seriously wants to leave Don Corleone, so it’s unsurprising Sollozo (Al Lettieri) was having none of it. And as pretty a diversion as it is, there’s a lingering feeling the Sicily interlude is inessential – certainly, if you had to cut something… I’d probably be dubious about the Don’s resistance to involvement in the drugs trade too, were it not for the knowledge it’s based in fact (Frank Costello was similarly disposed). The scenes that standout are Pacino ones: the orchestration of the restaurant assassination. The later Moe Green (Alex Rocco) confrontation, with him shouting and waving while Michael is measured, collected and firm (the more impressive because measured is not Pacino’s favourite reflex).

Pauline Kael’s contemporary review is one of her most on-the-money. Under the title “Alchemy”, she called it “a great example of how the best popular movies come out of a merger of commerce and art”, referencing Mario Puzo’s “trash” novel and suggesting Coppola “has stayed very close to the book’s greased-lightning sensationalism and yet has made a movie with the spaciousness and strength that popular novels such as Dickens’ used to have”. He “salvaged Puzo’s energy and lent the narrative dignity… The abundance is from the book; the quality of feeling is Coppola’s”. Further she suggested “the willingness to be basic and attempt to understand the basic, to look at it without the usual preconceptions, are what give this picture its epic strength”.

Kael also complimented Coppola’s “tenaciously intelligent” direction and was struck that it was “amazing how encompassing the view seems to be – what a sense you get of a broad historical perspective…. Full as it is, The Godfather goes by evenly, so we don’t feel rushed, or restless, either; there’s classical grandeur to the narrative flow”. The Godfather represented “popular melodrama, but it expresses a new tragic realism”.

In The Academy Awards by Jim Piazza and Gail Kinn, they suggested “Coppola put the mafia on the map, leaving filmgoers a little bit in love with the criminal subculture”, and it’s an argument we cannot refuse. From here comes Scorsese, and thence Goodfellas. As much as we wouldn’t want to be a part of it, there’s an appeal to this organisation, with its own codes, rules, family structures and even socio-political microcosm. Simultaneously, as Kael, noted we see “organised crime as an obscene symbolic extension of free enterprise and government policy, an extension of the worst of America”.

These threads are pulled into perspective by the review in The History of the Movies (edited by Ann Lloyd), which notes “It has been said that The Godfather is a radical film. This is a difficult argument to sustain, for the point the film makes about the place of crime in American society (its intimate connections with the established representatives of law and politics, its control over legitimate enterprises, the analogies that can be made between the way crime and large corporations conduct their affairs) are all familiar ones… If anything, the film, with its admiration for a certain ideal of masculine purity based on honour, ruthlessness, the use of violence and the maintenance of the family, its reactionary in outlook”. Or as the Don says to Johnny Fontane “You can act like a man!”

What is notable about “the family” is that it fosters an illusory state, as if its separation of “ethic” engenders a heightened truth or perception. In fact, it is simply an intended and favoured part of the system, vital to the Hegelian dynamic, however “organically” organised crime factions might seem to arise. Were it not for the state, there could be no mafia; theirs is a symbiotic relationship.

Like Kael, the History of the Movies reviewer found the movie’s success explicable because, in its sense of the epic, “It has many of the pleasures of the nineteenth century realist novel, providing an alternative social world that the reader can inhabit”. It’s certainly true that few since have successful painted so effectively on such a canvas. Leone made epics – including one in the gangster world – but they lack the same sense of both intricacy and overview. Scorsese is at his best when he personalises his canvas, is invested in it (hence some of his rather empty adaptations and biopics). Coppola himself has returned to the well, and delivered an unalloyed epic that even exceeds his work here (Apocalypse Now), but the alchemy Kael spoke of in titular terms is hard to come by. That’s why it’s alchemy. 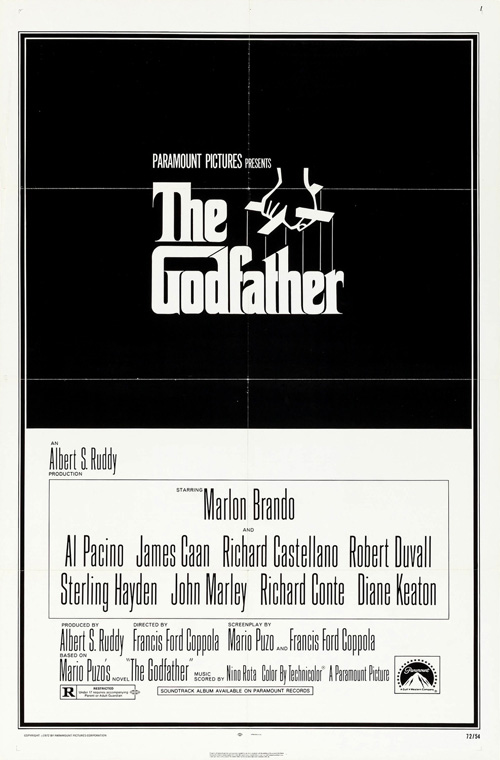 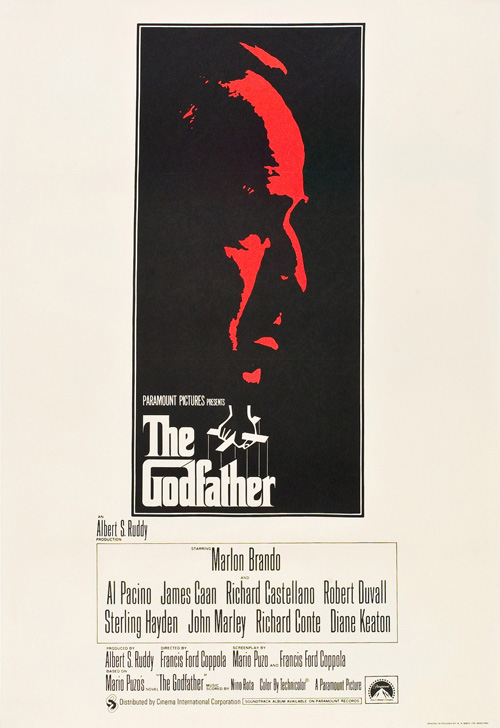