Welcome to the fallen world.

Honestly, I don’t think this is a great series – it seems determined to unfold with a geriatric pace reflective of its two main leads – but Night Sky just about earns its keep through incorporating several provocative concepts just begging to be pegged as soft disclosure. This is one of those series that requires its characters to avoid saying the bleeding obvious or necessary in order to sustain itself, with the consequence that precious few among them are relatable or sympathetic. Combined with the meandering sense of forward momentum – it makes Cocoon look like Raiders of the Lost Ark – and Night Sky’s eight episodes feel like they’re twice that.

Irene: This is our riddle to solve.

Not helping this any is an approach to unveiling its vital plot details apparently modelled on the early seasons of Lost. Amazon might be a relative guarantee that Night Sky will have a couple of seasons to find its feet, but the current landscape of mystery-tease storytelling arcs doesn’t look altogether healthy just now, with competing streaming empires Netflix and HBO seemingly eager to fatten only their healthiest children.

Byron: I knew it was a sex dungeon.

Principles Irene and Franklin York (Sissy Spacek and JK Simmons respectively) are retirees, frequently spending their evenings gazing out at the vista of another planet, one they access via a chamber and portal beneath their garden shed. At the season’s outset, they haven’t ventured from the security of the planet’s hermetically-sealed viewing gallery in the twenty years they’ve been visiting, fearful of the atmosphere – or lack thereof – that lies beyond. However, their uneventful sojourns are interrupted on dual fronts, by the arrival of Jude (Chai Hansen), who appears in the viewing area one night and claims amnesia, and back on Earth, owing to the intrusions of nosy neighbour Byron (Adam Bartley), whom Franklin is initially – understandably – irked by, but who eventually becomes a confidante.

Franklin: What’s out there?
Jude: Nothing.
Franklin: That’s what I thought.

As noted, there’s a snail’s pace here, accentuated by the inability of anyone concerned to talk to each other. The consequence is that while both Simmons and Spacek are formidable talents (I can’t imagine the originally cast Ed O’Neill in the Franklin role), it’s Spacek who comes across best, as the more open and giving partner. Meanwhile, Franklin’s increasing curmudgeon makes for some odd choices (not least deciding to trust Byron after the latter has become convinced the portal is no more than a shaggy-dog story; this would have been the ideal moment to get rid of him, yet Franklin doubles down).

Franklin isn’t entirely wrong to distrust Jude, who may be sincere in escaping a mysterious cult and finding his father but is lying to Franklin even in the season closer 8: Compensation (we’ve already seen his struggle out on the planet’s surface in a flashback, confirmed by the body Franklin discovers; he’s presumably from the settlement Franklin and Irene behold in the final scene, which is also presumably where Bryon’s lodging, either detained against his will or being fed grapes on chaise-longue).

Franklin: It’s nothing personal, Byron. I just don’t… like you.

Hansen plays Jude as inscrutable or apparently sincere, while singularly failing to bring innate likability to the mix. In contrast, Bartley really sells Bryon as a difficult customer (albeit, Casse Buggé manages to make his wife Jeanine even less sympathetic, if that’s possible). One thing about Lost was that your allegiances might change, and there were always annoying characters (Jack, Kate), but you were usually invested in someone. Creators Holden Miller and Daniel C Connolly seem to have done their damnedest to populate Night Sky with an ensemble you want to keep at arm’s length.

Franklin: We were fine before you came here.
Jude: You sure about that?

Franklin and Irene’s extended family, via flashbacks to the son (Angus O’Brien) who committed suicide (immediately prior to the discovery of the portal) and visits by granddaughter Denise (Kiah McKirnan), are variably effective. There’s some decent, subtle de-aging on Spacek and Simmons for the flashbacks, but with much of Night Sky, the emotional development teeters the wrong side of the thin line between layering characters and indulgence.

Denise: Why don’t you like me? Is it because I’m black?

McKirnan gives an appealing performance, but aside from Denise’s doubts about her career/education path, the writers seem set on identifying her entirely by her mixed-race status, first in the bizarre suggestion that Irene might be prejudiced (Denise wouldn’t have been able to work that out after twenty years?) and then her local friend’s affront that she should be considering dropping out of school because “not everyone has same advantages”; Denise understandably responds “I worked my ass off”. Nevertheless, it’s an interesting subject, as indelicately as it has been raised – how easy is it to rationalise the competing forces of impartial merit and positive discrimination, and banish the thought that one’s achievement might not have been purely down to the former? Denise also seems very interested in Jude. One has to wonder why, unless she regards his diffidence as somehow smouldering.

The other main plot thread concerns Argentine cult member Stella (Julieta Zylberberg) and her teen daughter Toni (Rocío Hernández), sent on a mission by Cornelius (Piotr Adamczyk) to secure the apostate (Jude). Adamczyk is a good example, if you’re not going to have likeable characters, of at least having memorable ones (always easier, if you’re an outright kill-happy villain). For much of the first season, Stella is quite disagreeable, as conflicted/dedicated to the cause as she is, while Toni is sympathetic in her innocence of her mother’s secret life and the restrictions upon her own freedom that have resulted. Stephen Louis Grush also makes an impression as flippant Nick, unchastened by Stella’s serious-mindedness.

Byron: I’m gonna be special. You’ll see.
Jeanine: Why do you have to be special? Why can’t you just be you?

That’s the thing, though. The series is so morbid and self-important for much of the proceedings, yet lacking the gripping narrative to drive that along (see Dark as a contrast, the least humorous show ever, but entirely compelling). As these things go, light-fingered Chandra (Beth Lacke) probably garners the least goodwill of everyone, so her death by Cornelius isn’t especially devastating, while breakaway leader Hannah (Sonya Walger, of Lost’s Penny fame) does some pretty obvious fake drunk acting 7: Lake Diving (it’s no wonder Irene has her suspicions).

Irene: He’s not an alien, Franklin.

This is really preamble to suggest that, while Night Sky is competently made and serviceably performed, it isn’t sufficiently engaging that I wouldn’t have ditched it, had I not been intrigued to see what, if anything, it might drop regarding its central conceit. Miller has professed a fairly homogenised take on the universe (“… we are all on this rock hurtling through space, kind of trying to figure out why that is”), and we’re shown straight-up that the planet Irene and Franklin look out upon delivers a globe model of planetary bodies. Nevertheless, this is a universe where it seems portals are the means to hop about the place, both locally and in an interplanetary – or inter-plane-ry – sense, a method not entirely at-odds with other understandings of how things actually are or may be (as opposed to spaceships plunging through a nominal vacuum).

In his research, Byron comes across a weblink claiming “Reptilian overlords teleporting to Earth”, which again feeds directly into such conspiracy lore, of Draco visiting Earth and dwelling in underground bases (other lore suggests human colonies elsewhere in the universe and/or beyond the ice wall. Or, if you buy solid planetary bodies, and Laura Eisenhower’s understanding, colonies on the Moon and Mars). It’s notable that the exterior of the planet looks not entirely unlike the type of footage a Mars rover might pick up, or any planet filmed within a studio or on a volcanic island, give or take a coffee table.

Irene: And the planet?
Jude: You’ve seen it. it’s just a wasteland where things go to die.

The part of Night Sky’s mythology that really made me sit up and take notice was the timeframe, though. In 3: The Caretaker, Stella tells her daughter they have “a sacred responsibility” and a “duty to take care of something truly magnificent”; their family has been doing this for “About 300 years”. Which would be since about 1720, which is about the time it’s suggested the “event” occurred (the mudflood, or more accurately flood, and a devastating alteration to the path humanity was on at the time), resulting in the Anunnaki taking control of the Earth. Byron reiterates the date two episodes later (6: Dear Franklin), when showing Franklin an image he located of another chamber (“This was in a journal from a missionary in Argentina 1723”).

Byron: Have you gone out there yet?
Franklin: No, I was always scared. I’m not scared anymore.

If the viewing gallery suggests something out of Kurt Vonnegut (and the random furniture The Prestige), it seems Night Sky is based mostly on the concept of the breakaway human colony, established through as yet unidentified ways or means, and that this colony was established prior to, or in conjunction with, an event that occurred approximately 300 years ago. It’s Hannah’s “Welcome to the fallen world” that’s most resonant in this regard, suggestive of a place that, unlike the off-planet colony, has descended into a less than optimal state for reasons yet to be identified. Of course, this colony is also apparently oppressive, regimented and data-chipped, with The Count of Monte Cristo used in an allusive sense, concerning as it does a wrongly-imprisoned man out for revenge.

Franklin: Your entire body is about to be broken apart in about a trillion particles and reassembled across the universe.

Inevitably with this sort of show, once the makers start to reveals its mysteries, the air tends to be let out of the balloon, so they have to pile on replacement ones. Night Sky, with its sects and portals, has something of the quality of a less grisly, dour Dark. That one failed to stick the landing (for me), but succeeded in keeping you on your toes throughout, so dense were its character histories and parallel timeframes. Night Sky is positively linear, lethargic and retiring by comparison. It retains a glimmer of fascination, but a second series may be more about Amazon’s deep pockets or decreed soft disclosure than viewer demand. 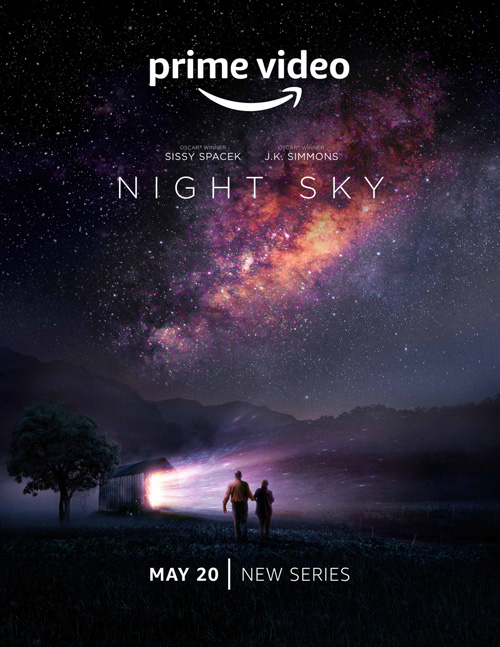