In retrospect, perhaps the most notable aspect of Body Heat is how stylistically distinctive it is from Lawrence Kasdan’s subsequent pictures. Admittedly, he was operating elsewhere in the drama or dramedy sphere most of the time – and occasionally in the “shit weasel” one: avoid Dreamcatcher – but even his westerns display little in the way of verve. Body Heat is precise and studied in its neo-noir flair, matching the screenplay’s studied dialogue and John Barry’s woozy jazz score with a hermetically oppressive mis-en-scène.

Which makes it a curiosity, palpable in mood and atmosphere yet eccentrically heightened in sensibility. Kasdan readily agreed when it was suggested Body Heat “isn’t exactly a parody, but it’s undeniably self-aware”. He compared it to film noirs like Double Indemnity and Out of the Past: “I loved how wised-up the sensibility was. I tried to put that into Body Heat, and I ripped it off of those movies just shamelessly, but it was great fun”.

Body Heat’s a very “written” movie, in that sense, something that wasn’t, on first viewing, my main takeaway. Which was rather, as Paul Taylor put in Time Out, “the pleasure of unravelling a confidently dense yarn for its own sake”. That, after all, is the big draw of this kind of dupe tale: just how the hapless protagonist will be shown up as a schmuck. Multiple viewings later, though, and the picture’s gradations of “pastiche” command fullest attention. The way, for example, Kathleen Turner, in her breathy deadpan, is bent on telegraphing how married woman Matty Walker is bad for business and doesn’t mean a single thing she says to Ned Racine (William Hurt, whose death was announced this week) when it comes to intimations of love.

Turner withholds, and she entirely plays the character as one attentive to the genre form. Further yet, as if she’s taken her performance cues from lookalike Anne Baxter in All About Eve: “Ned, hold me. Just hold me”. Matty is resolutely insincere, unconvincing in her neediness. This serves the genre recognition, emphasising what a sap Ned is; we, the audience, can see right through her. But then, Ned has been announced as none too smart from the off, even before Matty, in the movie’s most famous line, says as much (“You’re not very bright, are you? I like that in a man”). Ned’s initial court case tells us he’s no great legal mind. Later, ex-client Teddy (Mickey Rourke) emphasises that, when it comes to engaging in criminal activity “You ain’t no genius”.

In contrast to Turner, Hurt’s playing is distinctly naturalistic. Kasdan’s anecdote about his casting – “his agent called and said, ‘Bill really wants to be in this movie, but he wants you to get rid of the murder’” – speaks volumes about the actor’s approach, reversing at speed from the tale’s essential artifice (Verhoeven would later make Kasdan’s take on noir seem positively verité by comparison in Basic Instinct).

What’s interesting is that Kasdan doesn’t call for consistency, and that Body Heat is able to support these different approaches by dint of its pervasively humid, nocturnal mood. And that they both work on their own terms. (While form suggests one generally finds positive things to say about someone after their passing, it bears noting that, while Hurt was undoubtedly a very talented actor, his more myopic side – as a basic human being – can be illustrated by the anecdote of how went up to co-star Ted Danson prior to shooting and asked “Do you trust me?” before grabbing him by the balls and repeating the question.)

Elsewhere, in one of two dynamite supporting turns that announced both actors as major talents, Rourke absolutely runs away with Teddy – the delivery of his lines, the pauses, the cadence – without making it seem like he’s “performing” a retro-noir type. Danson’s contrast, as Ned’s much more capable colleague Peter Lowenstein, is one of the utmost looseness and ease. You’d be easily fooled there was a movie star in the making here, rather than the TV one he turned out to be; Goldblum was considered too, and he’d have been just as good. Dancing Danson on a pier is perfect (scripted) business, while his easy response to being offered a cigarette, after everyone else in the room lights up as one, begged a spinoff following his own legal entanglements: “No, I don’t need my own. I’ll just breathe the air”. Kasdan could have ensured everything here was hyper-stylised, the way the Coen Brothers or Sam Raimi would have, but the mix and match makes Body Heat the more interesting.

Pauline Kael well recognised Kasdan’s angle (“A forties pastiche that verges on camp but takes itself straight”) but found his efforts entirely resistible. She complained Body Heat was neither fish nor fowl, objecting to the “insinuating hotted-up dialogue that it would be fun to hoot at if only the hushed, sleepwalking manner of the film didn’t make you cringe or yawn”. Because she didn’t like what Kasdan was doing, at all, she went further still in suggesting “he doesn’t seem to know if he wants laughs or not” and that he didn’t even understand noir. Most devastatingly, “People praise Kasdan for his sense of structure, but it’s really just formula”. Ouch. Kael had nice things to say about Danson and Rourke, though. Much less so for Turner, directed to act sexier than she appears to be (“she’s like nothing human”), and Hurt (Fred MacMurray “made a better chump”).

One can only assume Taylor had read Kael’s review when he opined “Whether the movie-movie cleverness becomes as stifling as the atmosphere Kasdan casts over his sun struck night people is all down to personal taste, but there’s no denying the narrative confidence that brings the film to its unfashionably certain double-whammy conclusion”. Certainly, my personal taste was satisfied, as it would be by most of the director’s offerings that decade (Silverado excepted). Like a few others (Rob Reiner), Kasdan’s high batting average would subsequently veer off precipitously, but his aptitude for genre and character and – yes –“formula” were rightly feted during this period (he could hardly be blamed for Lucas’ edicts that went to hobble Return of the Jedi).

Kael was of the view “The hardboiled double-entendre dialogue… is ludicrous in a contemporary film with four-letter words and naked lovers…” I’d say strikingly distinctive, rather than ludicrous, but that’s Taylor’s point. Some exchanges do stand out on this revisit, though, particularly the conversation between Ned and Peter about the young witness (Heather) attempting to recall the visitor (actually Ned) she saw with Matty. Much ribald laughter ensues when Peter recounts of her testimony: “She’s never seen one angry before”. It’s funny scene in isolation, carried by Danson’s superb comic timing.

Kasdan, of course, would later commit the odd, suggestively shot moment to film near the end of I Love You to Death, where one child helps another to reach a drinking fountain. Which in turn, led me to this conversation from the Raiders of the Lost Ark story conference. Larry doesn’t seem to bat an eyelid.

George Lucas: I was thinking that this old guy could have been his mentor. He could have known this little girl when she was just a kid. Had an affair with her when she was eleven.
Kasdan: And he was forty-two.
Lucas: He hasn’t seen her in twelve years. Now she’s twenty-two. It’s a real strange relationship.
Steven Spielberg: She had better be older than twenty-two.
Lucas: He’s thirty-five, and he knew her ten years ago when he was twenty-five and she was only twelve.
Lucas: It would be amusing to make her slightly young at the time.
Spielberg: And promiscuous. She came onto him.
Lucas: Fifteen is right on the edge. I know it’s an outrageous idea, but it is interesting. Once she’s sixteen or seventeen it’s not interesting anymore. But if she was fifteen and he was twenty-five and they actually had an affair the last time they met.

Yeah, definitely an outrageous idea, George. Although, I’d describe it a little less charitably. Kasdan’s work on the Star Wars and Indy franchises never subsequently came close to his first two efforts, alas, and it’s Kasdan Junior (Jake) now making more of an impression as a director. Larry’s all but out to pasture.

Still, he had an impressively confident run up until somewhere around Wyatt Earp. Him and Kev both. Body Heat ranks up there with The Big Chill and The Accidental Tourist as his best work, but in this case, it’s very much in the line with his genre offerings for pals George and Steven; there’s nothing much going on under the hood beyond the pastiche-ness of it all. Which is fine. Body Heat does pastiche with the best of them. Oh, and on the subject of presentation-first, I don’t think I’d seen the main US poster (below) prior to this revisit. It’s utterly absurd. It looks like Body Heat was made by the Zucker Brothers. Or the Porky’s producers. That it became a hit was evidently not down to the marketing. 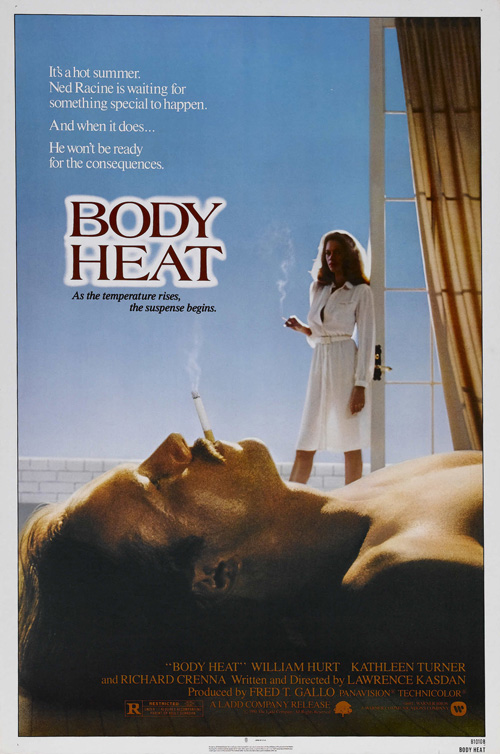