There are some places which, to an Englishman, are sacred.

Has The Italian Job been forever sullied by its association with/ appropriation by Loaded/ lad culture/ Top Gear et al? I don’t think so. It was a bank holiday and family favourite long before being “rejuvenated” as an emblem of Cool Britannia and shallow self-regard. Indeed, the most striking part of the picture is how custom packaged it is from the first. There’s an easy confidence to Peter Collinson’s film, whereby it knows exactly what it wants to be and how to deliver that. Plus, it’s propelled by a supremely catchy, “footie anthem” theme song: Getta Bloomin’ Move On! (The Self Preservation Society).

There’s also the ending. One of the very best endings in movie history, flourishing a “Now get out of that”, literal cliffhanger which, without the “can do” confidence of Michael Caine’s Charlie Croker would leave you thinking – rather like the same year’s Butch Cassidy and the Sundance Kid and its freeze frame – there was no way out for out (anti-) heroes. But Charlie’s “Hang on a minute, lads. I’ve got a great idea” followed by a slightly less reassuring “Err… Err…” is enough to instil a belief that he will somehow make good on this. And even if he doesn’t, he’ll live to pull off another job.

I’ve discussed that ending with others who still find it a bit of a bummer, wishing they’d made a clean break; they should have got away in a manner earlier movie tradition would have prevented – criminals cannot be rewarded or escape scot free – yet would have been relatively innocuous in the year of Easy Rider. My recollection is that, on first seeing the movie as a youngster, I too felt that way. Now, it simply seems like the perfect capper. Although, legend has it there were four different written endings, and producer Michael Deeley – later of The Deer Hunter and Blade Runner – came up with the final one. And it would have led into a sequel. If so, I’m glad a follow-up didn’t happen, simply because they’re rarely able to bottle whatever it was (the idea of a sequel series “set to revolve around Corker’s grandchildren, who inherit his old safety deposit box, and a quest to find the Italian bullion is reignited” sounds absolutely appalling, if not to say abhorrent. But inevitable. If they must do it, get Guy Ritchie involved).

You couldn’t really characterise The Italian Job as feeding into the burst bubble of shattered dreams, the pervasive comedown characterising the year of Manson and found in the likes of Easy Rider, The Wild Bunch, Midnight Cowboy and Butch and Sundance’s nostalgic reverie. If you want a yardstick, it more closely resembles The Love Bug. However, one might see the ending, rather like the uncharacteristically bleak On Her Majesty’s Secret Service, putting a dampener on ’60s sky’s-the-limit thinking. In which case, it’s as if no one told the makers they should have been putting the brakes on the optimism until the last moment.

The Italian Job is, after all, the ultimate movie as a lark. Being in prison is a lark, as its inmates showing due respect to queen and country; patriotism is itself an upbeat lark. It’s about as knowing as movie get without breaking the fourth wall, playing with Rule Britannia iconography in a manner that truly beckoned no re-embrace in the ’90s. There’s nationalism at play and casual xenophobia, but it’s self-aware, conscious it’s all a game and so deserves to be treated cartoonishly, be that Bridger’s etiquette, the use of the Union Jack, the colour-coded minis or the EM-scrambling portly footie fan (“Bloody foreigners”).

Accordingly, it also displays Caine, in the first clear example of himself as a brand (well okay, maybe Billon Dollar Brain’s titles win that one). This was his last “young Michael” role (see also The Ipcress File, Alfie), where he’s confident, ready-quipped, unflappable and hip to the scene. Two years later, he’d startle as reptile-eyed Carter and from thence cash-grab oblivion (okay, not quite, but let’s just call him indiscriminate in his choices).

He’s one of the key comperes of this event, his breezily casual manner informing us how we should treat the job every bit as much as Quincy Jones’s superb scoring and Peter Collinson’s expert execution. Troy Kennedy Martin’s screenplay helps, of course (and its cocky confidence illustrates his versatility, when compared to his later TV masterpiece Edge of Darkness). Douglas Slocombe’s photography is appropriately poppy and colourful. It’s Collinson’s work, though, that always makes me wonder.

Rather like Peter R Hunt, who graduated from Bond editor to director with On Her Majesty’s Secret Service and made one of the few early entries in the series that stands the test of time stylistically, Collinson subsequently made little of merit. Indeed, he directed eleven movies over the following decade (he died in 1980 at the age of only 44) and none of them are held in any kind of regard. The only one I know well is the And Then There Were None remake (which I like, but many don’t). Along the way, he incurred the enmity of Tony Curtis, who knows a thing or two about bad movies.

But Collinson’s acumen in The Italian Job is never in question. The proceedings are infectiously upbeat and pacy. Perhaps its larger-than-life comic strip was better suited to his temperament than the genres he would later plumb. In concert with editor John Trumper (who worked on prior Collinson pictures and later on Get Carter), the picture carries an almost musical rhythm and assuredness, long before The Self Preservation Society kicks in, false-triumphantly, at 85 minutes and takes us through to the ending (the shots of the minis in the sewer to Quincy’s accompaniment are sublime). Everything has a perfect rhythm: Croker must persuade Mr Bridger of the wisdom of his plan, then train for the job (of which, the most famous line), then put it into effect (cue some delirious stunt work and a mosaic of editing filled with cheeky thrills).

As noted, the movie’s materialist glee – it’s all objects, objectives and objectifying, be it cars, money, girls, even football, and cheerfully unabashed with it – made it ripe for superficial rediscovery in the ’90s under the auspices of Cool Britannia. But, as also noted, it’s the self-awareness that makes it a keeper. Ailing Noël Coward as Mr Bridger is both iconically Noël Coward and a parody/celebration of absurd patriotic spirit and national pride (you can have your cake and eat it with a staunchly royalist criminal emphasising the wheels of control). Martin had wanted Nicol Williamson as a harder nut, which… well, I guess it’s all relative.

Caine, of course, is pure Caine, at his most effortlessly charming and charismatic. It’s probably the closest he comes to a caricature of his perceived persona, and he entirely inhabits and informs the picture’s tone. Is there a more perfect scene here than the one where he and Camp Freddie (Tony Beckley, peerless, and later of Get Carter and Doctor Who’s The Seeds of Doom) visit Miss Peach (Irene Handl) – and her complement of cats – and she tells them of “Something quite obscene” her son Professor Simon Peach (Benny Hill) did with Annette? The timing, reactions, delivery are all beautifully done. It’s a relatively small sacrifice that he’s also responsible for one of the most (badly) mimicked lines in movie history. Possibly the most (badly) mimicked in the British Isles.

Hill is very naughty, of course. There are also appearances from the likes of Simon Dee, Robert Powell, John Le Mesurier. Caine creates instant rapport with the various crew members (including Michael Standing and George Innes). It’s an equal-status enterprise, whereby the posh drivers are reluctantly allowed to partake by the good working-class criminals. The curiosity is how incidental girlfriend Lorna is (Maggie Blye), introducing Charlie to a harem and getting angry at him, but making little impression other than through fashionably era-conscious dress sense.

Success? If you look at the Wiki page of top-grossing movies of the year, you’ll see The Italian Job at seven, but given the movie was cited as a miss by Caine (due to advertising) and ranked only fourteenth for the year in the UK, that seems like revisionism, after-the-fact wishful thinking. It can be fairly definitively argued, however, that The Italian Job is one of the many movies whose reputation steadily gathered lustre through rewatch value, rather than necessarily having instant classic cachet. The remake, in contrast, did very well for itself, but no one mentions it nearly two decades later. But then, Marky Mark is no Michael Caine. 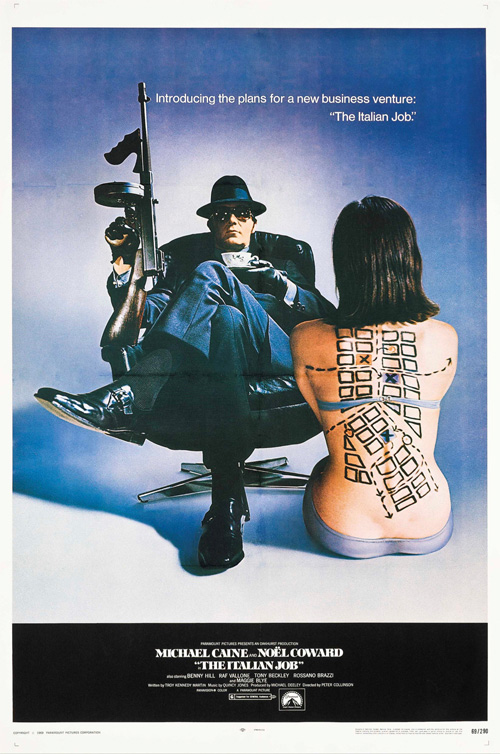 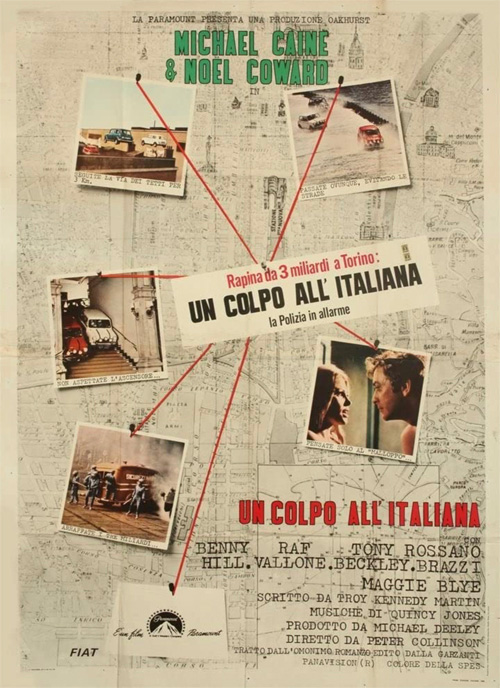