The king is mad. I am doomed.

If asked to speculate, I’d propose a greenlight for this adaptation of Maxwell Anderson’s 1948 play followed directly from A Man for All Seasons’ Best Picture Oscar win (it has been claimed the less than salubrious subject matter, rife as it is with royal staples of incest and adultery, would have prevented an earlier film version). One might further conjecture that it was foolhardy to think a same-era Tudor setting featuring many of the same figures could see lightning strike twice, yet both Becket and The Lion in Winter had been well received earlier that decade, both with Peter O’Toole as Henry II and both garnering Best Picture nominations. Anne of the Thousand Days duly earned one, almost as if middle/early modern age forays into British history were guaranteed recognition, regardless of quality. A bit like expensive musicals in that regard. That no one talks about Anne of the Thousand Days today should be no surprise, however; it’s curdled stodge, emblematic of historical genre’s predilection towards pompously inert pageantry.

Nevertheless, there’s a certain pleasure to be had, even with the least efficacious of these prestige pictures, in seeing all the familiar thesps lining up to essay familiar (or not so familiar) parts in generally familiar fashion. It’s no surprise to find Peter Jeffrey, TP McKenna, Denis Quilley, Cyril Luckham and Vernon Dobtcheff, but disappointing their roles are so perfunctory. Gary Bond (later of Wake in Fright) makes an impression as the servant tortured to confess adultery with Geneviève Bujold’s Anne Boleyn.

William Squire (a decade later, he could be relished overplaying to the max as the Shadow in Doctor Who’s The Armageddon Factor) has the difficult role of Sir Thomas More – difficult because Paul Scofield won the Best Actor Oscar for his take three years earlier – and supplies it with a keen-minded reserve. There’s some decent dialogue here and throughout – indeed, it’s the adaptation’s saving grace, such that, just as you are nodding off, an exchange or line of genuine wit or intelligence grabs your attention – and his request to be helped up to the chopping block is especially laden with gallows humour: “As for coming down, let me shift myself”. His mild reproof of Cromwell for failing to heed his advice also speaks volumes: “You have, I believe, told the king not what he ought to do, but what he can do”.

Michael Hordern is present too, entirely absent of a backbone when it comes to the king’s whims (he has already berated daughter Mary – Valerie Gearon – for her lack of insight into her monarch’s psyche: ”What he gets freely, he despises… You are lost to him”). He’s ever so keen to see Anne break the approved engagement with Lord Percy (Terence Wilton) and consort with King Henry VIII (Richard Burton). Anthony Quayle received a Best Supporting Actor nomination for his amenable Wolsey, eventually exited from his role after the Pope fails to approve Henry’s divorce.

There’s also John Colicos, everyone’s favourite Baltar from Battlestar Galactica (and Klingon Kor in Star Trek’s Errand of Mercy), whom I didn’t expect to see, ensuring Cromwell is a devious, odious hound. Strong as the ranks are, director Charles Jarrott – later to helm the disastrous Lost Horizon remake and Michael Crawford classic Condorman – offers nothing of consequence. The picture hangs there like a cumbersome medieval tapestry (Georges Delerue’s wandering minstrel score is another thumbs down). Pauline Kael generously suggested Jarrott was “good with actors and he keeps the issues and the dialogue intelligible”, which is damning with faint praise. If anything keeps Anne of the Thousand Days afloat, it’s the performers.

There are problems there too, however, mostly with the signature roles. Burton at his best is a legend on screen (his McPhisto in the previous year’s Candy is hilarious), but Kael had it right when she called the performance one of “more craftsmanship than vitality”. Burton reportedly hated Bujold (per his diaries), which may explain why there’s much more zip to the last half hour of the picture, when he becomes overtly antagonistic. Certainly, while there’s some strong dialogue between them – usually in respect of her spurning his attentions – there’s no spark or chemistry (Elizabeth Taylor appears as an extra, reputedly worried Burton would have a fling with his co-star; she needn’t have worried).

Henry: If some young man wrote this song for you, Anne, what would you say of it?
Anne: I should ask him how his wife liked it, your Grace.

I’m more familiar with Bujold from later career performances, so her co-starring here is as disorientating as seeing, say, Timothy Dalton or Anthony Hopkins in ’60s pictures. Again, Kael got to the nub of the problem with her “strong studied performance”: “Her readings are superb… but she’s too tight, too self-contained… one does not really warm to her”. At later points, she has sometimes been cast such that this quality is a strength, but you only really get onside when someone else – usually the king – is being an absolute pig.

Anne: Any evidence you have against me, you yourself bought and paid for. Do you now begin to believe it?

Kael also wondered at the apparent failings in Henry’s motivation, such that “it does not convince us that, after all those years of waiting for Anne, Henry would turn against her when she gives birth to a daughter”. While this isn’t a strong suit, sufficient is conveyed in this regard; she broke her promise to him (to give him a son), and in his immature perception, that is the end of things. We see this again later, when, having engineered testimony against her of adultery (extracted by Cromwell through torture), he breaks apart a witness, unable to bear the idea that another can attest to such a thing (since it undermines his kingly prowess).

Anne: My Elizabeth shall be queen!

Less forgivable in terms of plotting is the foreknowledge, with hindsight, that their daughter will become queen despite Henry’s protestations otherwise. Of course, any such text is itself scrutinised against the “official” record and found wanting or indulging inaccuracies for the sake of dramatic licence. The fidelity of the historical account is itself sacrosanct, whether or not such confidence is justified (invariably not, I’d argue).

Perhaps the most alarming moment in the movie is the beheading. Not because we see the grisly detail of the chop coming down on her “little neck” but the assumed posture; it’s natural to assume there’d be anything but a good, clean cut kneeling upright. It seems, however, this was why an expert French swordsman was brought in; it was much more effective than axe-led beheadings on a block (often, er, executed by inexperienced hangmen).

The Secret History of Hollywood’s Academy Awards rhetorically questioned how a Best Picture nomination was earned for this “dreary historical costume drama”, but one might ask the same of Hello, Dolly! (where the answer is simply that it had Babs in it). Anthony Holden’s explanation was illuminating: “by serving filet mignon and champagne at a series of special Academy showings – set up in panic at the film’s dismal box office – and then writing thank-you letters to the elderly swells who snoozed through this year’s women’s-magazine look at Henry VIII’s brief marriage to Anne Boleyn. Scores of freeloaders proved venal enough to ‘vote the card’ for what John Simon called ‘the quintessential work of art for people who haven’t the foggiest notion of what art is all about’”.

Ten nominations duly resulted, the most of any film that year; Burton and Bujold were recognised for acting, and there was also Adapted Screenplay, Art Direction, Cinematography, Score and Sound. In the end, though, all that champagne and steak only paid off with one actual win: Costume Design. Two wins, if you count Sid James wearing Burton’s coat for Carry on Henry. A few years later. As period Oscar fare goes, Anne of the Thousand Days is probably even less well remembered than Nicholas and Alexandra, with both sharing a ponderous telling borne of the incorrect notion that expansive (epic) accounts of history are their own reward. 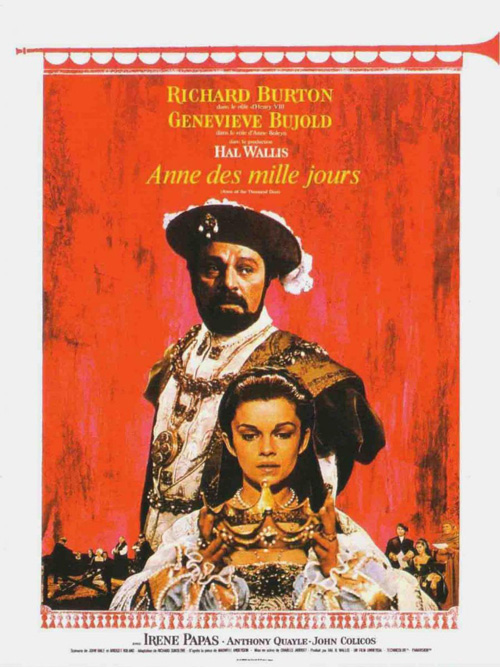