She was a noble lamprey.

Halfway through Drive My Car, I realised I could be starting on a second viewing of Belfast at the same point. Not that I especially want to watch Belfast again, but to suggest Ryusuke Hamaguchi’s film is indulgent would be an understatement. To some degree, its melancholy perseverance with its characters pays off in slowly revealed insights and the blossoming of minds meetings and sharing guilt. At the same time, it’s so bent on mirroring and referencing its core theatrical inspiration – Chekhov’s Uncle Vanya – in slavishly meandering fashion, I began to wonder if I wasn’t watching the rehearsals in real time.

It’s evidence of the quality of Oscar fare in these thin-on-the-ground times that, as conditional as my appreciation of Drive My Car is, it might be the most robust of the largely middling Best Picture Oscar contenders I’ve seen thus far. The problem with such half-decent movies as these being it’s often rather difficult to choose between them. Drive My Car feels almost flagrantly prolonged, and the overtness of the Vanya referencing – readings from rehearsals reflecting the circumstances of the main characters – led me to wonder if I was missing something, that maybe there was a layer beyond the obvious… which there evidently was not.

Hamaguchi’s film is based on a short story by Haruki Murakami (from his 2014 collection Men Without Women). The writer is apparently known for his ambiguous endings, and Hamaguchi follows suit. This isn’t a picture where every loose end is tied up, but thematically it is quite in your face. Actor/theatre director Yüsuke Kafuku (Hidetoshi Nishijima) is first seen in a performance of Waiting for Godot, which inevitably informs the lives-in-stasis of Kafuku and his driver Misaki Watari (Töko Miura); Yüsuke’s wife Oto (Reika Kirishima) dies during the prologue – if you can call the forty minute pre-credits scene a prologue – by which point, we’ve learnt she receives the creative spark for the stories she composes as screenwriter during sex with her husband (I know, a little on the nose), that they lost a child, and that Oto is having an affair; her husband is aware of the latter point, but does not tell her he knows (we later learn she had numerous liaisons).

Yüsuke’s routine is as rigid and formalised as his wife’s creative sluice was open; he drives to work rehearsing lines against Oto’s pre-recorded dialogue tapes, and two years later, when he is given a residency in Hiroshima (where he is again putting on Uncle Vanya), he intends to do the same. The theatre company dictates that all cast members must have a driver, however, which is where the taciturn Misaki comes in. The additional key character is Köji Takatsuki (Masaki Okada), an entitled, arrogant young TV star we earlier saw conducting an affair with Oto; Köji experienced a scandal after being “framed” for a relationship with a minor, none of which appears to disincentivise Yüsuke from employing him.

Despite Drive My Car’s length, Hamaguchi largely sustains the essential tensions of its relationships – director, young actor, driver – with assuredness. With Misaki and Yüsuke, the suspense is of mutual restraint and when and how they will communicate. With Misaki and Köji it is, per the former and Oto, of one knowing significant information the other does not, and thus maintaining a cautionary control.

Hamaguchi is weaving a story around interconnectivity, both contrived (director and actor) and unforced (synchronicity, if you will, between director and driver). Yüsuke emphasises routine in his workshops, such that actors are merely reading off the lines with no inflection at one stage; he has no passion for his life (“There must be something. I can’t take this”). This is compounded by guilt over having potentially been able to prevent his wife’s death (he drove around that fateful night to avoid going home to a conversation she wished to have, and thus wasn’t there when she suffered a cerebral haemorrhage). Misaki, in turn, did nothing to save her abusive mother when their home was buried in a landslide. They thus share a similar burden (“If I were your father, I’d say… you did nothing wrong. But I can’t… you killed your mother, and I killed my wife”).

Köji meanwhile – who will be arrested for beating a photographer who later dies, and who tells Yüsuke “I’m empty there’s nothing inside of me” – is able to add to the “very mysterious” tale Oto composed. Her protagonist, who used to be a lamprey in a previous life, is obsessed with a boy and visits his house when he is not there. We learn that, on an occasion when she is there masturbating, a burglar enters and attempts to rape her; she stabs him to death and leaves, yet nothing is ever said about the body. She has the desire to confess to the boy (into the lens of the newly installed surveillance camera outside his house). Doubtless there are various interpretations of this doing the rounds, but since a lamprey feeds by boring into the flesh of other fish to suck their blood – or creativity/vitality – Hamaguchi isn’t playing the obscurity card. As to the surveillance camera confessional, this may represent Oto’s desire to admit to her “sins” of affairs with other men.

The sequence in which Koji tells the story is perfectly delivered by those concerned, as is Misaki’s later admission regarding her mother. However, there is a sense with the latter, as she then “embellishes” the tale by recounting her relationship with her mother’s separate personality (Sachi), that Hamaguchi’s getting rather carried away with himself and his facility to deliver such yarns. Just keep piling on the lampreys. Possibly this too ties into Yüsuke’s pronouncement of performing Vanya: “This text has the power to make that happen. When you say his lines, it drags out the real you”, but it rather feels like Hamaguchi’s high on his own fumes.

You see this in the tropes too, the way the driver/passenger relationship invokes Green Book or Driving Miss Daisy (two very different people enriching each other’s lives). If that one works, I was less impressed by the visit to the refuse plant and Misaki comparing garbage to snow – why, it’s the American Beauty scene! And if little is made of Misaki showing Yüsuke Hiroshima’s Memorial Museum and cenotaph, it is nevertheless itemised into the picture’s tapestry for a reason.

The same can be said for an interlude with a deaf cast member Lee Yoo-na (Park Yu-rim) that seemed to go on for an eternity – along with the similar, “moving” final scene she performs with Yüsuke’s Vanya – as she reprimands her director for singling her out for special treatment when he asks how she’s finding the process (as opposed to, you know, treating it as an amiable dinner conversation subject; naturally, he takes the rebuke on the chin, as he needs to be told and put in his place). Yüsuke’s obviously not at all put out regarding any performance limitations his cast member will impose, as he’s already delivering the play in three languages. Which, depending on where you are at, is the height of inclusiveness, absurdly pseudish, or expressly designed to torture any audience member foolishly compliant enough to attend (that’s theatre for you).

Drive My Car’s ending has provoked some debate as to the specifics of Misaki’s situation (it’s perhaps typical of the picture’s unapologetic structure that Hamaguchi should register her as the main character in terms of the conclusion, one who barely registered during the first hour). Yüsuke’s rather pat “We’ll be okay, I’m sure” is evidenced by Misaki, now sans scar on her face (which she received when the house collapsed and kept as a reminder), with a red Saab (like Yüsuke’s) and a friendly pooch (similar to the one she took to at Lee’s house). She’s also now in South Korea, so she has moved on, free from the binds of guilt and having found a “way of surviving this hellish reality”.

Or has she? It might be argued as simultaneously contradictory, since the young woman who has an aptitude for spotting deceit – “I can tell, because I grew up among lies. I had to discern them or I couldn’t survive” – seems to be entirely on board with state-sanctioned ones à la mask mandates, to the extent she tromps through a carpark in one and is no rush to remove it in her car. And is accumulating the paraphernalia of others’ lives (car, dog) really a way to be oneself?

I was intrigued by the suggestion Misaki didn’t exist at all; the movie explicitly notes she’s the same age Yüsuke’s daughter would have been (23), while her mother’s childlike alter remained the same age for four years (the age Yüsuke’s daughter was when she died). Oto didn’t want another child, so this imagining is Yüsuke’s way of fulfilling his yearning while working through his wife’s foibles as they affected him. The absent scar denotes healing of himself. The lamprey no longer has its hooks in. 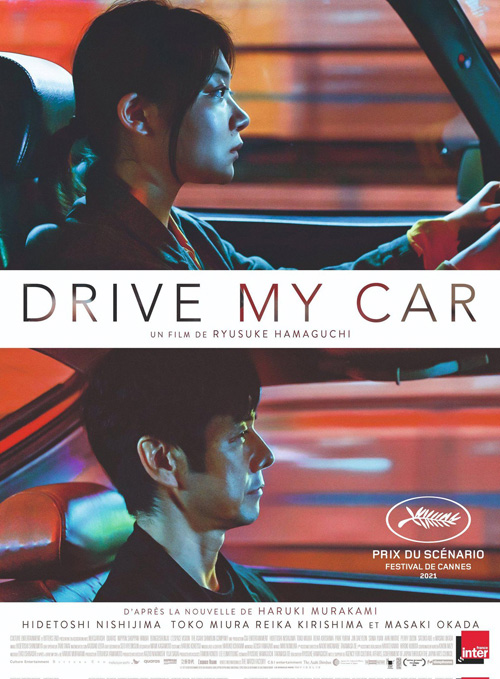