One eye from night, as they say.

The Salute of the Jugger
aka The Blood of Heroes
(1989)

The extreme-sports version of Number Wang, the rules of The Game at the heart of The Salute of the Jugger are so baffling, it’s amazing writer-director David Webb Peoples was able to muster any tension in the contests at all. But I guess hitting, mutilating and maiming one’s opponent will tend to have that cumulative effect, even when the objective (sticking a skull on a spike, loosely) is vague. It’s big in Germany, apparently (playing The Game, that is). The Salute of the Jugger is, in its own oddball way, kind of great, despite not being especially stunning in terms of ideas, themes or action.

Enough that you half wish Peoples, who has had his screenplays confounded – Leviathan, Hero, Soldier – as much as they were elevated – Blade Runner, Unforgiven, 12 Monkeys – by directors, had tried his hand at helming again subsequently. Although, an extra posting on IMDB gives a few clues as to why he might have sworn off.

Given Peoples hasn’t been enormously prolific, it’s easy to fix on the predominance of science fiction in his work, and more still, literate science fiction. As much as Blade Runner was a trend setter, and 12 Monkeys found raves for using a short film as a jumping off point, the likes of Leviathan (Alien) and Soldier (Terminator) wore their influences on their sleeves. So too The Salute of the Jugger.

Mad Max. You have the setting (post-apocalypse), the location shoot (Australia), the designer leather and rags, and the makeshift settlements (the underground Nine Cities is the equivalent of Bartertown). You even have a Mad Max villain, with Hugh Keays-Bryne essaying a much more refined, if equally decadent, character than his earlier Toecutter, and its cinematographer (David Eggby, fresh off cult REG item Warlock). Producer Charles Roven, meanwhile, would later take Peoples’ 12 Monkeys screenplay to Gilliam (and also, inadvisably, get a Rollerball remake off the ground).

You also – and this is crucial – have Blade Runner’s antagonist Roy Batty, aka Rutger Hauer, as team leader Sallow. Hauer brings his uniquely idiosyncratic charisma to a role that is, by turns, brutish, sly and sensitive. The mood he sets is as crucial to the picture as anything its director and his various production departments deliver. Indeed, it’s a role where Hauer’s allowed to do a lot with very little, breathing life into Sallow and so making him one of his more iconic performances. At least, for those who have seen the movie.

Peoples has done well with his cast generally, though. Joan Chen was a weak link in Twin Peaks around this time (not entirely her fault), but her petite vulnerability serve her character (Kidda, a “Qwik”, the player who runs with the skull while her teammates protect her. See, it does have coherent rules… Kind of. Just like Number Wang). Vincent D’Onofrio, Delroy Lindo and Anna Katarina round out their group (Kidda replaces Justin Monjo’s maimed Dog-Boy early on). Later, Max Fairchild (also of Mad Max) makes an impression as an old opponent of Sallow, one who won’t be persuaded to play a foul game.

Of which, we join the picture in the above-ground scrub towns, as our team wanders from settlement to settlement playing the locals. There are, however, higher stakes, in the form of the Nine Cities; Sallow was once a player there, his past left murky, but ructions evidently involved one of the ruler’s daughters. The impression he made was significant enough that the wonderfully named Lord Vile (Keays-Byrne) makes a point of instructing veteran champ Gonzo (Fairchild) to do for him. By this time, Sallow has lost an eye, making him somewhat the underdog.

There isn’t a whole lot of subtext to be wrought from the game itself, except perhaps as recognition of a disappointed people, conditioned by their ancestors into an obsession with mindless entertainment, seeking the same once again after a collapse. Rather than more, for example, spiritual pursuits. Indeed, the introductory text has either the affront or irony to call our current era a golden age, and here we witness, post-collapse, much the same in the way of governing structures enduring. The elite rule underground (as some believe they do right now), decadent, spoiled and entirely devoid of empathy, and with a concomitant thing for ingesting blood (very suggestive).

The game, when it’s discernible, resembles some unholy – and unruly – mashup of rugby, American football, cricket and medieval jousts. Despite his inability to martial the play entirely convincingly, Peoples does show a commendable knack for quickening the pulse; this picture is very brief (admittedly, I watched the shorter cut), but one might easily imagine a more fully-fashioned realm on a more sizeable budget. The Salute of the Jugger isn’t a million miles from Gladiator in its essential beats. The longer version includes a longer concluding sequence that finds Kidda taken in by the Nine Cities elite, while Sallow is destined to continue playing the game (much like Gonzo, but above ground). ’Twas ever thus.

Duncan Jones, who made such a striking debut with Moon and went on to not so much, sung the picture’s praises: “It was an influence on me because he had found a way to make a science fiction film on a budget, which had a real sense of world creation… Even though it’s a small film, I feel like this exists in a reality I can believe in” (that extra mentioned above seems to think it was quite costly, though). The Salute to the Jugger is one I well recall being released, and the negative reactions; Time Out’s Tom Charity suggested “this thin, sloppy scenario hasn’t an original idea to its name”. Like that’s everything. I nevertheless had a hankering to see it – especially due to that deliriously unapologetic title (much better than The Blood of Heroes) – but never got round to it, until now. I’m glad I have. I salute those Jugger. It’s the movie Mad Max Beyond Thunderdome should have been. 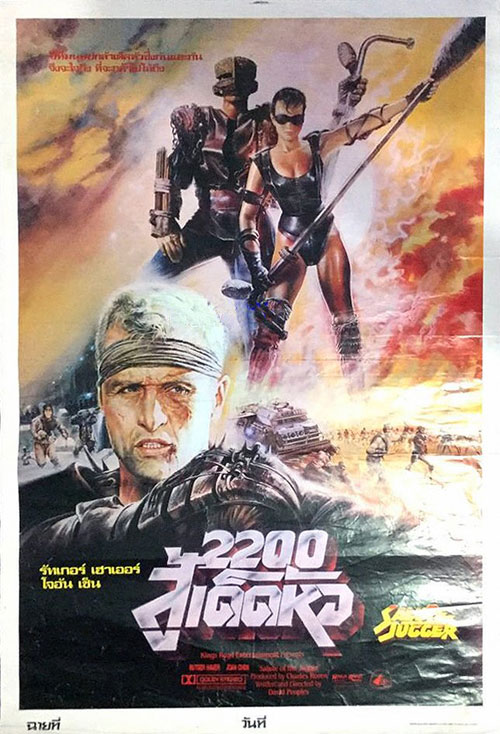