Kiss me, my dear, and I will reveal my croissant.

The movie that confirmed Jim Carrey as a megastar. There’s probably a groundswell of opinion that The Mask hasn’t aged well, owing to a combination of special effects and Jim fatigue. Coming back to it, however, confirms it as a frequently very funny picture, one that might even go down better now, shorn of all the surrounding hype. It’s Carrey’s Nutty Professor, essentially: a meek and mild nobody transformed into an uber-confident smart mouth. The only caveat being that, unlike Jerry Lewis, Carrey isn’t quite downtrodden enough as bank clerk Stanley Ipkiss; there’s already clearly a quipster in there.

The Mask: With these powers, I could be… a superhero. I could fight crime, protect the innocent, work for world peace. But first…

Is there a comparable star explosion to Carrey’s in 1994? You could argue Eddie Murphy a decade-plus earlier, but he was already movie star waiting to happen thanks to SNL. True, he could have plumbed for the wrong vehicle, but there was already an appetite for his brand when 48 Hrs blew up. Carrey, though. Everyone wasn’t raving about him In Living Color, and he’d had bit parts in getting on for ten movies before Ace Ventura: Pet Detective.

Over the course of ’94, he blitzed audiences with releases of Ace Ventura (spring), The Mask (summer) and Dumb and Dumber (winter), the latter two finding themselves in the year’s Top 10 worldwide (The Mask was fourth and one of the least expensive, with only Dumb and Dumber and Four Weddings and a Funeral coming cheaper). That’s stratospheric and in triplicate by any yardstick.

Hollywood is fond of the “who knew?” fable, as opposed to the “sold-their-soul” formula for success, but the terrain of Carrey’s subsequent brushes with infamy and ignominy, not least biting the hand of those who fed him before returning to the fold, suggests someone heavily embroiled in some way shape or form. Lore tells us New Line got a bargain, his Mask deal signed before Ace Ventura became a surprise hit (he’d command a fee more than fourteen times higher for Dumb and Dumber).

There’s no denying his talent, of that Robin Williams/Ryan Reynolds/Murphy explosive improv variety, whereby you wonder where it can all be coming from. As noted above, it took him much, much longer than Murphy to find the fame he sought (he auditioned for SNL around the time Murphy was wowing on it, and was turned down).

Which is all to say, playing a man possessed in The Mask seems particularly fitting (see the Carrey doc on making Man in the Moon for further allusions towards the comedian/possession analogy). Adapted from the Dark Horse comic, it’s also ironic that an uncertain property hailing from that medium should have hit so big – while skewing such adaptations overtly towards comedy – when most that weren’t Batman were floundering at that point.

Ben Stein – Anyone? Anyone? – plays De Neuman, on hand to inform us the (a) mask supresses the id, and the wearing thereof allows us to adopt a socially acceptable image. This one, in particular, relates to god of mischief Loki. Neuman is referencing the public at large – ie the mass social compliance of mask-wearing during the recent coof scam – but for the superhero – and the villain, and the Elite cult member – the mask represents release, unfettered by standards of social decorum and observance.

The effect is probably most similar to Michael Keaton as Beetlejuice, in that the performance is entirely outré, guzzling up everything in sight, yet utilised sparingly, such that you look forward to the headliner taking centre stage, be it humiliating villains, robbing banks, performing Cuban Pete or swallowing a bomb, aided by Tex Avery-style cartoon effects (on the one hand, these DO show their age; on the other, since they’re cartoon effects, they’re more than excusable to a current eye, much more so than many of the current ones passing themselves off as state of the art).

The effects never outdo the effect that is Carrey himself, though. Which means there’s much fourth-wall breaking, spot on impressions – Gable, Clint, Field, Elvis – and instant catchphrases (“Smokin”).

Kellaway: Those pyjamas are impossible. This actually happened.

But even Carrey can’t outdo dog Milo (actually called Rex), who steals away much of the last third of the movie. First in breaking Stanley out of prison (“No, not the cheese. Keys”). Then in donning the mask and having at bad guys. And finally, swimming out to secure the discarded facewear for his own purposes. The only other performer getting a significant look in for laughs is Peter Riegert’s frustrated Lieutenant Kellaway, who must also contend with Milo (“I’m sorry. He seems to be attracted to you”).

It’s curious that the movie posits the mask itself as ameliorating conditions, yet it’s no longer necessary once balance – in lifestyle, relationships, employment – has been restored. Unlike Carrey and fame, where he didn’t just want a taste, Stanley has no wish to remain a superhero.

The Mask: I will spread your paté. I will dip my ladle in your Vichyssoise.

I mentioned lore, and this tells us Diaz auditioned twelve times for Tina Carlye; it was Chuck Russell who insisted on her, against New Line’s wishes. The Mask’s legacy, of course, is that this movie not only confirmed Carrey as a megastar; it also introduced the world to Mr Cameron Diaz.

It’s entirely understandable, in retrospect, that most people thought Cameron (a good, solid, gender-neutral name) was a woman. After all, she’s the spit of her dad, Ellen Barkin. Watching her in The Mask now, with her hipless, exuberantly boyish charm, and having seen her buff beach bod, complete with prominent v-line, one might naturally wonder how one could have missed the obvious.

Cameron has either retired because she grew weary with the fame of it all, or because the seams start to show more as one ages (but wait, she’s returning in Netflix movie Back in Action, because Netflix can be guaranteed to make plastic-looking movies delivered by a patented virtual engine). She has also said “Because of my muscle definition, I can get a very man-like appearance, which I don’t like. I’m always telling my trainers, ‘Don’t make me look manly! I buff up really fast!’” I’ll bet. Also, we well know women can’t be funny (cf Ricky Gervais), and Diaz IS quite funny. Ergo. She’s a man, man.

Contextually, her appearance on the scene came a year after an actual man was nominated for playing a trans woman, while Carrey himself had featured trans villain Sean Young – “But if I am mistaken… if the Lieutenant is indeed a woman, as she claims to be… then, my friend, she is suffering from the worst case of haemorrhoids I have ever seen!” – in Ace Ventura, via his own Crying Game spoof (all together: “You couldn’t do that now!”) Are these developments mere coincidence? Like Cameron and Ms Thomasina Mapother IV teaming for Knight and Day? Of course, it’s said the safest assumption is that any given star is trans until evidenced otherwise. I know, next thing I’ll be suggesting every single member of every iteration of Charlie’s Angels was born male.

The other noteworthy point about The Mask is that it scored Chuck Russell his biggest hit. You wonder quite what went wrong with his career. While the through line of effects comedies can be seen, linking Dreamscape to Dream Warriors to The Mask, just about, the rest of his choices seem to have been exercises in self-sabotage. Not least, Arnie-on-the-wane vehicle Eraser. More recently, he’s been consigned to the dumpster of budget Travolta and Willis (including one of the latter’s last dozen or so one-day gigs) and Hindi-language pictures. A shame, as his deftness here is invisible and pitch perfect. 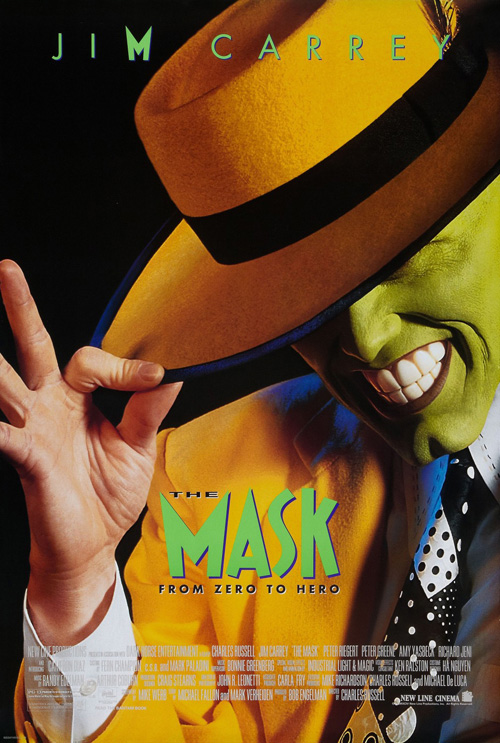