Just like the army. Give them an inch, they’ll take a mile.

It’s an odd realisation that little Norman Wisdom, armed with his persona of loveably inept comic man-child, only came to the fore when the actor/performer was pushing forty (in 1953’s Trouble in Store). By the time of The Square Peg, he was well into his fifth decade, his initial appeal having slid a little (this may be overstated, however, as he remained popular throughout the ’50s). Along with The Early Bird, this army farce ranks as one of his best comedies; it’s largely shorn of the sentiment that would run a number of his pictures aground and only really coming up short when the need for plotting takes over from the first hour’s freewheeling set pieces.

Mr Grimsdale: They don’t seem to realise that any fool can carry a rifle. But how many of us can recognise a double subsidence of sandy soil?

Military-based comedy tends to be fertile ground, thanks to the inherent conflict between regimented conformity and unfettered anarchy. Of course, that can be a sop in itself, should the movie lead to an affirmation of the armed forces’ essential values; the comedy lead learns to be a good soldier (Private Benjamin, Stripes). Indeed, the same year’s Carry on Sergeant (also featuring Hatti Jacques, and like The Square Peg, a big box office hit – third ranked for 1958) reached this resolution. Others, such as Private’s Progress and this picture, nursed a healthy disdain for a system that prescribes a similarly conditioned mentality on either side of the battlefield. Kubrick later documented this less mirthfully in Full Metal Jacket (which also slipped a narrative gear once it transferred from training to combat).

Wisdom’s Norman Pitkin, accompanied by Edward Chapman as his mentor/boss Mr Grimsdale for the first time – they’d later reteam for A Stitch in Time and The Early Bird in these roles; in the prior The Bulldog Breed, he’s Mr Philpots – is a proud roadworker for St Godric’s Borough Council. His labours are cut short, however, by the interference of the pesky British Army camp on the doorstep of his hole in the ground; “Don’t they know there’s a war on?” becomes the self-important clarion cry of each aggrieved party, until the army gains the upper hand by drafting both Pitkin and Mr Grimsdale.

It’s during this section that The Square Peg’s truly vintage comedy is produced, with Pitkin’s flagrant disrespect earning the ire of Colonel Layton (John Warwick of Trouble in Store), General Hunt (Arnold Bell), stammering Captain Wharton (Terence Alexander) and particularly Sergeant Loder (Campbell Singer, often cast as sergeants, one of whom would appear in The Celestial Toymaker. He’d play against Wisdom again in On the Beat).

Following a routine with a stop/go traffic sign (which sending Loder flying as a send-off), Pitkin once again winds up the sergeant when he reduces the recruits’ drilling to a farce, yelling contrary instructions to Loder’s that have them hopping (“Right! Right! Right!”), speeding up, slowing down or being dismissed altogether. Pitkin’s righteous tone (“You’re too late to apologise” he tells Captain Wharton) doesn’t do him any favours either.

Most uproarious, though, is his disguising himself as a WAC in order to escape detention. Spotted by Loder, who fancies his chances, the exchanges become increasing delirious as Wisdom maxes the coquettishness (“You saucy tinker” he tells the Sergeant, before rounding on him for suggesting a Lady Godiva look would be appealing for their prospective dance date: “How dare you!”)

Pitkin inevitably falls in love with a girl (an actual one). This time, it’s Honor Blackman at her least severe (but still inevitably highly superior) as ATS officer Cartland; there’s no suggestion this will be reciprocated, though. She thinks he’s sweet, but continually forgets his name, and he only becomes important to her when it serves her mission.

Sergeant Loder: Show us how Sir Francis Drake would have done it.

There are further prime escapades once Pitkin and Mr Grimsdale have been inveigled into basic training, not least some classic Wisdom coyness as he becomes all embarrassed at the physical exam (“I don’t want to take my shirt off!”) and attempts to cover his nipples. Later, he is told “Let’s see what a killer you are” before going hammer and tongs at a dummy. Mr Grimsdale is mostly called upon to faint, when he isn’t being exceedingly pompous, but there are added traces of even less-flattering qualities, such as his attempts to avoid buying Pitkin a pint. When they mistakenly end up in a parachute regiment, there’s an amusing line in Pitkin “bravery”, as he nonchalantly wolfs down a chicken sandwich and has a nap, little realising they’re about to jump out a plane.

The plot moves into focus during the France sequences, meaning it gets in the way of the unbridled lunacy at times. Particularly so when it comes to events at café Le Petit Escargot (yes, the name’s the funniest part of these scenes). Cartland is posing as a French waitress, and resistance leader Henri Le Blanc (Brian Worth) is hanging out. Having got their map readings wrong, Mr Grimsdale has been arrested by German forces and is soon being interrogated by General Schreiber, played by… Norman Wisdom!

The comedy double isn’t a new one, of course. It had a significant movie history even then (and in a more serious vein, I Was Monty’s Double was released the same year). In recent years, we’ve seen Dave (and Moon over Parador). Chaplin – who referred to Wisdom as his favourite clown – had provided The Square Peg’s basic template in The Great Dictator (1940). Will Hay borrowed the same two years later for The Goose Steps Out (1942), and it’s entirely understandable that Wisdom should have returned to such a bountiful well.

He gets to be vituperative and also quite ingratiating as Schreiber, who is attempting to woo Jacques’ opera singer Gretchen in highly suggestive fashion. His “Soon we mingle” innuendo is revealed as an “innocent” invitation to a duet, but he is soon pouring an entire bottle of champagne down Gretchen’s cleavage, rather less unimpeachably. There are numerous plays on pidgin German here (“Mein beautiful butterfly”; “A pfennig for your thoughts, Otto”; “Ein mouse”; “Ein frog in mein throat”).

Of course, mistaken identity ensues, with Pitkin showing his terrible singing voice after he locks Schreiber in the bathroom. In a further bout of borrowing the best ideas, a broken mirror allows Norman and Norman to play off each other (obviously, it isn’t as inspired as Duck Soup, where the genius came from the two brothers interacting). Additionally, there’s a moment where Pitkin and Schreiber speak to each other, and the synching is entirely fluffed, which is a shame. Pitkin’s escape, having ensured his allies’ flight, is neatly conceived and paid off, however; unable to locate the tunnel they came through earlier, he subsequently falls down it when facing a firing squad at dawn.

Unlike Will Hay, Pitkin is rewarded for his endeavours (he’s made mayor), but he has in no way improved himself in the process. Which is as it should be. The screenplay is credited to Jack Davies – later The Early Bird, Monte Carlo or Bust – Henry Blyth and Eddie Leslie (both The Early Bird). This is also Wisdom’s first credited writing input.

Also in the cast are Frank Williams (Dad’s Army’s vicar). Richard Marner (Colonel von Strohm in ’Allo ’Allo), Victor Maddern (Private’s Progress amongst many, many others). Oliver Reed’s in there somewhere too, uncredited, but I didn’t spot him. John Paddy Carstairs was a regular Wisdom director (going back to Trouble in Store). His work is competent but unexceptional (facilitating Wisdom is most important, of course).

The Square Peg was the seventh most popular film at the UK box office in 1959 (I’m unsure why it’s so difficult to find details of UK Top 10s over the years; this is supposed to be an era where such information at out finger tips). It also counted as something of a resurgence for the actor, ranked as the year’s third most popular British star; he’d also make the Top 10 in 1963 and 1966. 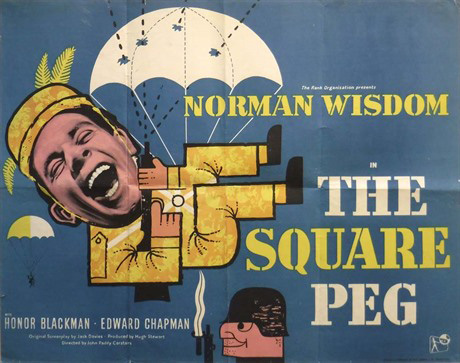 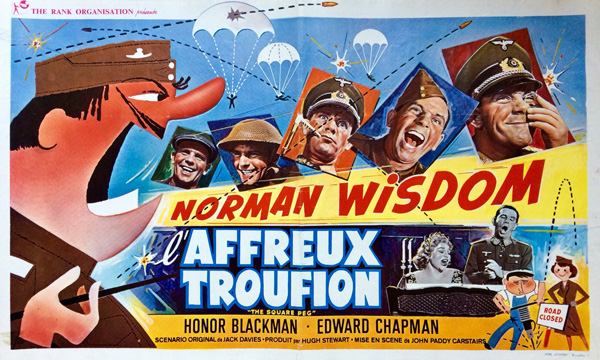