Jurassic World? Not a fan.

“Jurassic World? Not a fan.” You said it, Jeff (well, Ian Malcolm). I can’t say I’m really a Jurassic Park fan either, although I do respect the skill and efficiency involved in several of the first two movies’ set pieces. And more perversely still, unlike many, I wasn’t actively antagonistic towards the first Jurassic World, probably because I didn’t venerate its predecessors. Fallen World, while much better directed than Colin Trevorrow’s movie, and with a couple of leftfield ideas, simply wasn’t much cop. Jurassic World Dominion – per critics’ takes – isn’t much cop either, and furthermore, it isn’t very well directed. But, it has much more going on it that’s interesting this time round.

I’ve gone on about this before, but the whole dino-preservation nonsense at the heart of this series is both perverse and bizarre. Not just because this is a genetic aberration that is being venerated, and so has no part in the ecosystem – you know, the very fundamental conservationists are prone to wax less than lyrical about – but also because dinosaurs are big, ugly, scary and thoroughly deserve being torn apart by machine gun fire, bombs, missiles, you name it. You never got this kind of lily-livered, kid-gloves approach to prehistoric beasties in The Land that Time Forgot, thank goodness. Doug McClure would eat Chris Pratt for breakfast.

The most hilarious part of this whole notion is how transparently species-ist and riddled with hypocrisy it is. The movies do anything they possibly can to avoid humans hurting ickle-wickle or not-so-ickle-wickle dinosaurs (although dinosaurs can do in other dinosaurs; that’s okay), almost as if they’re a coded message designed to forestall any groundswell of adverse opinion against our reptilian overlords. However, when it comes an infestations of massive locusts that should have been extinct since the cretaceous, it’s quite a different matter. O-ho! Totally fine to go to town on them with an axe (courtesy Laura Dern, ever keen on destroying franchises), or wipe them out by altering their DNA. Those dinosiferouses, though. They’re to be nurtured and kissed and cuddled and called George.

Ian Malcolm: I had a dog once. Humped my leg so much I had a callous on my shin bone. True story.

There are some strange contradictions in impulse throughout Trevorrow’s movie, co-written with Emily Carmichael. Whose presence would explain why there are such strong roles for women here. Oh wait… The one reliable in pointing them out is Jeff Goldlbum, who I’d wager improvised most of his dialogue, since it’s a cut above anything else in Dominion. Dr Ian Malcolm has recently published a book titled The End of the World and is naturally taking a very rationalist, chaos theory approach. He espouses that “Human beings have no more right to safety and liberty than any other creature on this planet”, and that we are “subordinate to nature”.

Ian Malcolm: And the only play now is to take the time left, and do as we always do, squander it.

This can be debated, but his pitch-black humour – “But as they say, it’s always darkest before eternal nothingness” – when faced with calamity is a welcome relief from Trevorrow’s otherwise workmanlike charmlessness. Indeed, his comments seem actively designed to undermine the new players and their delight in all-things dino. Malcolm’s barbs are particularly aimed at Owen (Marvel co-star Chris Pratt, reduced to a lumbering piece of scenery as a Raptor Whisperer, and also Rides Horses with Dinosaurs… although the latter aren’t riding horses. That would be silly). Of Beta: “And you gave her a name? How about that?” Of Owen’s nonsense: “You made a promise to a dinosaur”. On Owen’s retrieval of Beta: “Is that a dinosaur on your shoulder?” He’s even allowed to shove a flaming locust in a dinosaur’s mouth, which is as close as we get to giving them some hell, Malone. Owen, meanwhile, is forever holding his frickin’ arm out at the dinosaurs as some kind of coaxing gesture. Every time he did it, I was praying one would have none of it and bite the damn thing off.

Hodgson: Dr Malcolm, you are fired.
Malcolm: And it was such a cushy gig.

Malcolm has been installed as lecturer at Biosyn Genetics – it’s at Maze Runner WCKD levels for plain text – which has its own dinosaur preserve (just how long will the deer population provide for hungry apex predators, I wonder? Until the end of the first day? Whenever someone mentions apex predators in ANY movie, I go into cringing spasms, so I won’t do that again here). The CEO is Lewis Dodgson – another name that leave nothing to the imagination – played by Campbell Scott, who is replacing the original movie’s Cameron Thor, in prison for one of Hollywood’s foremost and preferred proclivities, paedophilia. I actually assumed Dodgson was a new character, probably because of the aforesaid subtlety. Scott gives him bleached hair and a Bill Gates + Monsanto bent to control the world’s food supply by selling his special GM seeds. He’s to achieve this with the aid of those cretaceous locusts, who know what’s good for them and won’t go near farms growing the GM strain.

It’s etched out, then, that GM manipulation of the food supply is wrong. Or is it? “We’ve been looking at the impact of industrial farming on the environment” says Ellie (Dern), which rather than a call for a return to traditional methods may be a slippy subterfuge favouring lab-grown products or new and tasty meats (you know, like insects… We may be unlikely to see velociraptor burgers, but giant locust ones are a sure thing, surely?)

Maisie: How would I know what people do? Besides, I’m not even a real person.

The uber-sinister part of all this is that Jurassic World Dominion is, in fact, preaching a creed of genetic tampering, rather than warning us of the same. You know, because a global panacea awaits. The same old bollards. But no, it’s true. Turns out, clone Maisie (Isabella Sermon) is a good thing, a product of the love of her clearly warped mother Charlotte (Elva Trill), on account of how “She created you with her own DNA” and “She changed her DNA. She altered every cell in your body to eradicate this disease”. Screw entirely cogent ethical considerations! Huzzah! Plus, there’s no need for traditional human reproduction anymore, not with the advance of cloning, not when cloned humans get on so much better with the (un) natural world than bona-fide ones do (at the risk of sounding clonist).

The upshot of this is, thanks to retconned good guy BD Wong (after all, he was creating monstrous hybrids of already monstrous hybrids as recently as Jurassic World). Dr Henry Wu is now Mr Sincerity who made a mistake, but his quest still stands; he can use Maisie’s DNA to save the world! And change it. It seems the use of a pathogen to alter locusts’ DNA has revolutionised modern genetics. Which sounds to me suspiciously like revolutionising modern genetics by using a pathogen in a vaccine to alter human DNA. But you know, with locusts. But I’m sure that’s just me. Either way, genetic engineering = good thing. So I’m glad we cleared that up.

Trevorrow has a multiplicity of cast members here, two trilogies’ worth, and unsurprisingly, the next gen suffer most. Bryce Dallas Howard was always rubbish here, of course – no, I didn’t say “Full stop” – and Trevorrow throws her around as an any-fit from scene to scene. Parkouring her way across Malta, one moment. Going all Willard in some dirty water to avoid a dino, the next. And then receiving a hilariously redundant pep talk from Ellie, the next after that. Pratt is… Well, he holds his hand out a lot and is very happy to have two blockbuster movies this summer and an event series on Amazon Prime. So all that Christianity, while starring in a movie promoting evolutionary theory, is doing him the world of good.

Goldblum rocks, obviously. Dern never had much of a character in the first place– female parts in this series, natch (thank goodness she had The Last Jedi, right?) Neill has some grumpy-boots moments at first, but gradually drifts into the “He’s really just very boring, isn’t he?” mode that was always Alan Grant. Archive 81’s Mamoudou Athie is a repentant Biosyn sinner and makes the best he can of it.

On the dinosaur front, we start off 65 million years ago (no, really), cut to a T-Rex at drive-in and then discover a helicopter can really easily lose a T-Rex. Probably painted its toenails red and hid in a cherry tree. Some of the physical effects here are pretty ropey, more Super Mario Bros. reptiles than Jurassic Park ones. And on the general dino subject, over to Alan Grant:

Grant: Why do we dig? Because palaeontology is science. And science is about the truth. And there is truth in these rocks.

To paraphrase Luke Skywalker after he turned tail like the pussy he is, everything Sam just said was wrong. Science is patently not about the truth. Albeit, in such terms, palaeontology arguably qualifies as a science, since dinosaurs are completely made up. Cool and all but made up. I mean, just look at that flipping Edward Scissorhands dino in this one (Therizonasaurus, it says here). They’re laughing at you. Lying and laughing, laughing and lying. To quote, rather than paraphrase, George Costanza.

It shouldn’t be a surprise that Jurassic World Dominion is a hit, as the last two instalments were largely slated (by critics and/or Jurassic Park fans), and they made a mint. The question might be why this was, when the original trilogy suffered desperately diminishing returns (doubtless generational nostalgia, or some such crippling condition). On the plus side, they got off the island(s). On the minus, they’re still promoting conservation of this extinct species. Such an ethos is Hollywood in a nutshell. 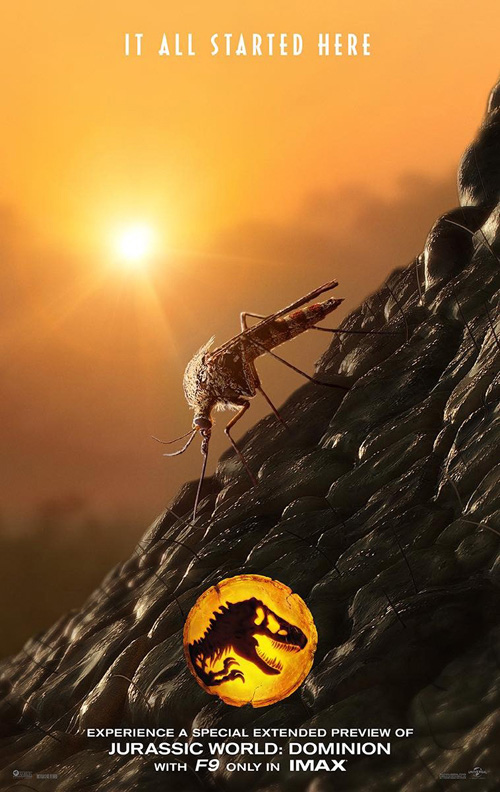