It’s okay. I just got a little fat.

Par for the course from M Night Shyamalan. Old is by turns confidently crafted and ham-fisted, confirmation that, while premise (and twist) is everything to the writer-director (and exasperatingly persistent cameo artiste), it’s very rarely been enough to see him through to journey’s end. In some respects, Shyamalan’s latest twist-horror is a thematic variant on his world-in-a-microcosm The Village, where the nature of reality is concealed from the participants. It foments less opportunity to incur the indignation of its audience when the truth is revealed, however, because there are only so many possible answers, most of which will likely have occurred to them by that point.

I’m probably more forgiving than many of the director’s most derided efforts – I even quite enjoyed batty The Happening, and if I doubt a second viewing would produce a similar verdict, the same was true of Glass – but conversely, I’ve only ever found his most acclaimed effort (The Sixth Sense) so-so. Consequently, I can admire his ability to sustain Old as long as he does, with all the goofy shock stunts he pulls along the way, but also find his character and dialogue choices a frequent cringe. Indeed, owing to the ineptitude of the latter, I’m reluctant to blame any of the performers for failing to meet the grade (Vicky Krieps and Nikki Amuka-Bird, in particular, suffer some abominable writing).

Shyamalan’s setup derives from Swiss graphic novel Sandcastle by Pierre Oscar Levy and Federick Peters; notably, they omitted to provide any explanation for events on the beach, whereas Shyamalan has red flags festering in the breeze from the off. Indeed, in that regard, it’s curious he (commendably, nonetheless) took inspiration from Walkabout and Picnic at Hanging Rock, the latter a textbook for failing to explain anything. They’re both pictures that foreground a capacity to say less but suggest more; M Night was calling upon the way in which they summon the power of nature, yet Old is ultimately, due to his express positioning, emphasising the power of control or study thereof.

Old has thus been immediately overegged, as mum Prisca (Krieps) tells her children to “Stop wishing away this moment” (wanting to get to their destination). Likewise, the director as writer is unsubtle in emphasising key ingredients, with the repeated identification of the beach party’s medical conditions (seizures, calcium deficiency, memory issues – turning out to precede schizophrenia – a tumour, nosebleeds). Also their food or meds. Of which: so the food is packed to preserve it, but once opened, how long would it take to go off under such accelerated conditions? Wouldn’t it be one of the first things noticed? Also announcing itself in triplicate is the slow-motion effect used as they arrive through the gulley, signifying a passage between worlds, and the very suspicious comment at the resort that they only recommend the beach to certain guests.

Perhaps Shyamalan thought, since he parades himself about as a svelter Hitchcock type – although, given his genre schtick and self-imposed limitations, a DePalma might be more apt – it was fine to indulge such overstatement. Really, I suspect it’s a case of the continued self-inflation that has blighted his career, from the dubious cameos (here, he’s a villain) to serving up a certain type of picture insistently, even when the genres subtly shift. Either way, his failings are as conspicuous ever in Old, most unflatteringly when it comes to having characters explain themselves and their professions in CliffsNotes form.

This can be excruciating. Amuka-Bird’s psychologist spouts the kind of hackneyed gabble redolent of an actual Hitchcock movie of sixty years ago (Spellbound or Psycho): “Maybe this is some kind of group psychosis”; “Maybe we should all talk about what just happened”. Meanwhile, Prisca is reduced to analysing bones via the over-explanation “I’m not a forensic pathologist, but from expeditions for the museum, I know…”

Nevertheless, the Dominican Republic location – this would all be virtual set, were it Disney – and the use of genuine film stock boosts Old where it counts. The movie came cheap, but the setting adds significant $ of production value. And Shyamalan, despite crafting a movie much longer than necessary – a problem for most productions today, and in his case, they’re all essentially Twilight Zone episodes stretched to feature length – punctuates the proceedings with arresting and off-putting incident: the sudden pregnancy and death, from young adults who were kids only a couple of hours earlier; the broken bones suffered by Chrystal (Abbey Lee), leaving her as a grotesquely disfigured sculpture; Prisca’s growing tumour and its extraction; solving the problem that is Sewell’s Charles with a rusty blade.

With regard to the aging, Shyamalan passes over various areas that probably didn’t demand unconvincing explanatory minutiae, but he is careful to have his junior participants grow mentally with their physical development, so he’s at least attempting to circumvent any queasy Big-ness. The director has referenced his interest in the subject matter in terms of “… our dysfunctional relationship to time that we all have”. Which is valid, although I’m less convinced by reducing it to Coof comparisons, per both star Alex Wolff and Shyamalan (“it was absolutely about this fear and uncertainty we were all feeling. This fear of infection… The idea of being stuck in a situation and not being able to leave”). Nevertheless, the setting serves to emphasise artificial impingements under which we all live and are moderated.

Indeed, titling a featurette “All the Beach is a Stage” speaks volumes to the picture’s world in miniature, the accelerated passage of time highlighting how easily one’s (or a generation’s) knowledge of what they think are facts and norms can be rewritten (it might have been interesting had the baby survived – or two babies survived – so extending the detachment from the original state by several removes, and approximating the alteration in awareness of the historical record from the last mooted reset to the present).

Then there’s the beach as a bubble, controlled from without, by person or persons unknown. We never quite knowing the hows or whys of our place in our designated environment; those working for the prevailing Elite may or may not believe they need justifications for their behaviour; in Old, resort manager Gustaf Hammarsten’s unprompted exposition provides the lowdown, whereby they can save hundreds of thousands of lives with new medication and “before we’re done, it will be millions”; it’s a rationalisation via inherently dubious appeals to utilitarian ethics (“Nature made that beach for a reason; Let’s do what nature asked us to do”).

Obviously, no institution as depicted by the movie would actually be in operation without implicit or explicit Elite backing or knowledge of its activities, so Old embracing the standard Hollywood cliché of the few bad apples being rounded up is disappointingly pat. But then, no one expects M Night movies to be top-to-bottom satisfying. It isn’t even so much about sticking the landing, since his failure to do so has become a self-styled trope. He’s a talented filmmaker apparently content to pigeonhole himself as a one-trick pony. 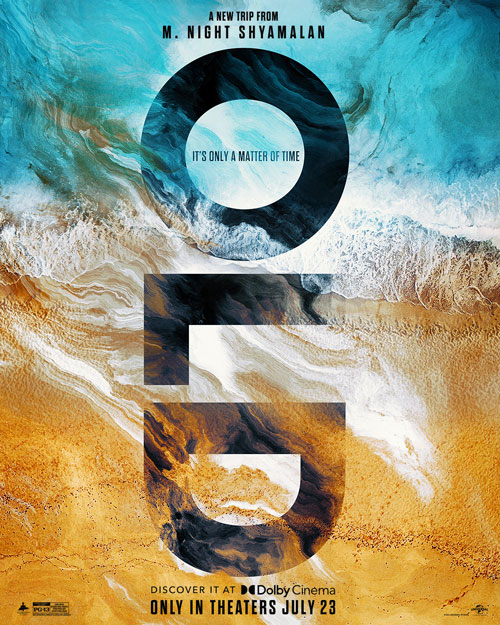