I’ll tell you how good that is. Even a gifted director couldn’t hurt it.

If you’re going to build the plot your play/movie on delirious/absurd twists, you’d better be sure you can sustain (or even escalate) them, or you’ll end up leaving your audience feeling short-changed. I suspect that’s why Deathtrap lacks the longevity of Sleuth, with which it is often compared. It might also be because Supes v Caine isn’t quite the event Sir Larry v Caine was. Which is to say, Sidney Lumet’s adaptation of Ira Levin’s 1978 play is highly entertaining. And then, it isn’t so much.

Others have been less kind, invariably others who didn’t much like Sleuth either (Pauline Kael in devastating put-down mode: “This movie is for people who dream of seeing Sleuth again – there must be one or two of them”). There is a sense, however, that the inherent theatricality of such material needs to be retained in a movie medium for it to be effective. The plotting is so intrinsically bound up in artifice, in an even greater, meta- sense in Deathtrap, that to play the play too straight draws attention to its show-off moves and mechanics in the wrong kind of way. As if the makers are asking for it to be seen as robust rather than absurd.

This is why Olivier was an absolute boon to Sleuth, as he was as theatrical as they came. Caine isn’t, of course, but he can be a voracious scenery chewer, which is gravy for the confined setting found here (Connery could too, come to that; I hadn’t realised Caine passed on Lumet’s The Hill to star in Alfie, so freeing it up to be one of Sir Sean’s best pictures. Connery’s burly bulk makes it more impressively brawny than Caine would have mustered, I suspect).

Sir Michael’s thus completely at home in the part of arch schemer Sidney Bruhl, ostensibly out to steal himself a hit play from Christopher Reeve’s Clifford Anderson by murder most foul. Much to his wife Myra’s (Dyan Cannon) disbelief, then shock, then adjustment. Really, though, Sidney’s out to murder Myra, in consort with lover Clifford, as we discover at the end of Act I, Scene 3 (at least, on stage). This, as many have also pointed out, is basically the gist of Diabolique (both versions, albeit the remake wimps out). Kael was of the view that Lumet and adaptor Jay Presson Allen opted “to make the movie version as realistic as possible. What this comes down to is a very broad, obvious movie that looks like an ugly play and appears to be a vile version of life”.

There’s something to this, in that Lumet doesn’t really have a feel for the material or how to extract the best from it, but I don’t think one could watch Deathtrap and contend he’s quite trying to go for realism either. There’s just no way you’d aim for such a thing and then furnish it with a “this is just a playful jape, not real at all” jaunty score from Johnny Mandel (Agatha, The Verdict).

There’s no doubt, though, that Lumet’s strengths were in the crime genre, preferably the more urban the better. His choices tend to emphasise the play-ness of the piece (its sets as a stage) rather than its theatre-ness, if that makes sense. As a consequence, Cannon and Reeve have problems, at times, locating a rhythm that doesn’t make them seem slightly wooden.

Cannon, startlingly narrow hipped and expertly highly strung, takes something of the short straw out of the trio, but that’s less about her acting than the limitations of the part. Reeve delivers more than a hint of mince as Clifford, along with a slightly ungainly quality that might be considered either a performance choice or unskilled failing, depending on your view of his range and technique. Essentially, though, he’s unable to hold his own with his co-star, which is the main concern. Caine has no problems at all, by turns gimlet-eyed, charming and snarling, playful and prissy.

Bigger than the adaptation, however, are the ingrained problems with the material. Once Levin (also Rosemary’s Baby, The Stepford Wives, The Boys from Brazil and, er, Sliver) runs out of Diabolique, he rather runs out of ideas. Or rather, instead of hatching something in keeping, he pursues the self-reflexive potential of what he has. That in itself isn’t such a bad notion, but not as the be all and end all. Clifford, to Sidney’s fury, decides he’s going to turn their deadly deed into a play, something that elicits some amusing self-critiques: “Scene 1 is still coming out a little stilted and heavy handed”; and, when Sidney comes on board to help – so he says, but what’s he really up to – “Let me do the thinking about Act II”. Thus, when Sidney dismisses Clifford’s initial conclusion (“Julian shoots himself? That’s exceedingly feeble, Cliff”) it could as easily be an assassination of Levin’s actual climax.

Because all Levin really has going for it is the “twist” that Clifford has anticipated that Sidney is planning to do for him. Which can’t possibly come up to par with the initial twist. Add in some Chekov’s Houdini’s Trick Shackles, and an aggressively intrusive and ungainly Swiss psychic (Irene Worth as Helga Ten Dorp – “portend”, geddit?) and you’d be forgiven for forming the impression Levin genuinely thought he could sell a crap resolution as actually quite clever (who knows, maybe he was correct; the play did incredibly well and sold for big bucks: $1m, the then-costliest purchase of non-musical adaptation rights, complete with a four-year window before the movie could be released).

My feeling is, the only way Deathtrap could truly have upped the ante on the first act would have been to contrive Myra somehow surviving it (such that the only way to achieve this would likely have been Clifford having an affair with her too). After all, after a certain point – the Diabolique idea of inducing a heart attack is pretty iffy in the first place, frankly – you can expect your audience to roll with the mounting twists within twists, and it would certainly make the Rubik’s Cube-style poster more appropriate.

The Film Yearbook Vol. 2 was of the view “Sleuth was no masterpiece, but it begins to seem like one compared to this”. Again with the Sleuth barbs. Sure, have a go at Sir Ken’s version, but I was unaware there was a groundswell against the original. What’s that? Time Out’s Tom Milne too? “Undeterred by the resistance to translation from the stage of Sleuth and its parlour murder game…” Ah well.

Apropos of nothing, I was struck by how the scuzzy Clifford bursting into the attic room resembled a similarly dishevelled Bruce Campbell from the same year’s The Evil Dead. Also, this idea that Caine was delivering nothing but turkeys during the 1980s simply isn’t borne out. I mean, next up was Educating Rita. And the following year we were awarded the classic Blame it on Rio! Not nearly as good as Sleuth then, Lumet’s movie is only a potential Deathtrap. 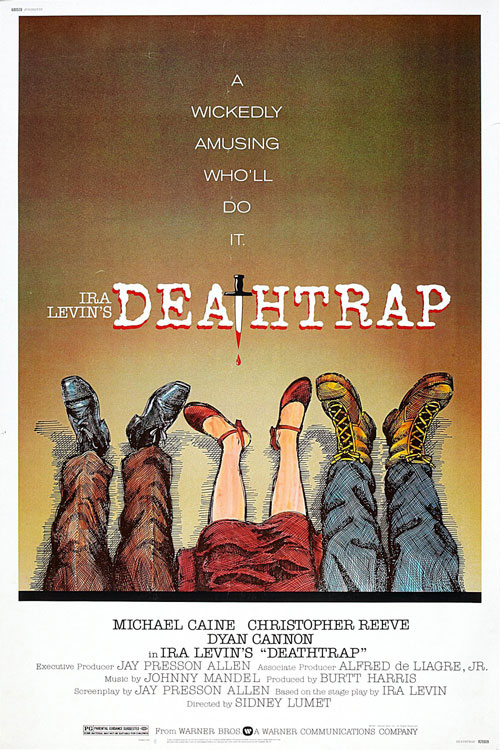