If that small woman is small enough, she could fit behind a small tree.

I can’t quite find it within myself to perform the rapturous somersaults that seem to be the prevailing response to this fourth run of the show. I’ve outlined some of my thematic issues in the Volume 1 review, largely borne out here, but the greater concern is one I’ve held since Season 2 began – and this is the best run since Season 1, at least as far my failing memory can account for – and that’s the purpose-built formula dictated by the Duffer Brothers. It’s there in each new Big Bad, obviously, even to the extent that this is the Big-Bad-who-binds-them-all (except the Upside Down was always there, right?) And it’s there with the resurgent emotional beats, partings, reunions and plaintively stirring music cues. I have to be really on board with a movie or show to embrace such flagrantly shameless manipulation, season after season, and I find myself increasingly immune.

Stranger Things mostly gets by on such consummately serviceable delivery, then, simply because the Duffers do what they do well, in that Amblin-meets-Stephen-King way of theirs. But a few points nevertheless qualify for a “must try harder”, if familiarity isn’t to breed contempt. In particular, and I mentioned this regarding Volume 1, there’s Vecna. Sure, he’s the requisite gnarly-faced monster with a deep, ominous voice, so full marks for delivering on expectations. Which is the problem, really. Vecna just isn’t interesting as performed by Jamie Campbell Bower (presumably) in a prosthetic suit. He wasn’t very interesting as a child psychopath either (Raphael Luce). But, as semi-likeable manipulator One, he was interesting. Take that away, and all you have left is the evil-because-evil monster face.

Brenner: I want you to know, I’m proud of you. So very proud. You are my favourite child.

Of course, One was evil from the off, so no amount of MKUltra-ing or Eleven sending him into a hell dimension was going to alter that. This is both unimaginative – One shows more potential for nuance than either his former or later self – and tends to let the bad guys (well, Brenner) off the hook. The “sympathy for the devil tactic” with Brenner – who is, after all, aware of ethical considerations in a way One is not, but just doesn’t care – is not an uncommon device, and it can be used effectively in the “misguided but initially well-intentioned” antagonist sphere. There’s arguably no such justification here – the Duffers are simply leaning on the trope, or perhaps they buy into it – and while Brenner is portrayed as stern, uncompromising and ruthless, he’s also granted “genuine” affection and concern for his creations.

On the one hand, this serves to confuse Eleven’s resolve (told “You are the one who released him from his prison” she parries that it isn’t her, “It is you, you are the monster”). On the other, his dying – Wiki says he’s dead but I won’t believe until his head’s on a spike. Even then, Chris Carter would find a way to bring him back – declaration confirms the Duffers identifying with “Papa” (how could they not? They need Eleven back to full wattage and firing on all cylinders to keep raking in the Netflix dollars). A true portrait wouldn’t be someone with genuine affection, except maybe in the manner of one who has a faithful dog.

Vecna: All I needed was someone to open the door. And you did that for me.

This back and forth on culpability, of gradations of evil, is a necessary part of the Luciferian/Satanist creed’s modus operandi, to disassociate in terms of moral baselines. The problem is not so much about saying good people do bad things, as saying, “Really, there’s not much difference between good people and bad people” (Hollywood narratives are still, predominately, required to end with good triumphing, but the point is the trickle effect, to muddy the waters sufficiently). So Eleven is our hero(ine) – our superhero(ine) – but she is culpable (“He did not make me into this. You did”). And if we can excuse young Eleven acting blindly, can we excuse teen Eleven wilfully embracing her dark powers – super powers, but dark still, so such summoning is rather akin to the Ancient One’s greyness – for the greater good? Isn’t that Brenner’s argument for what he does (did)? And we, as the audience, inevitably root for her return to her path of ascendance (to godlike, gnostic Luciferian status). Eleven, despite warnings against, hubristically proceeds to confront Vecna – demigod vs demigod – rejecting his claim “You have already lost” with “I know you are, but what am I?”

Vecna: He was just a man. An ordinary, mediocre man. That is why he sought greatness in others. In you and me.

Which is what Vecna is doing. While it’s something of a cop out – unless they choose to explore it in Season 5, although we’ve got the Duffers saying the season won’t be as big as this one – to leave the Upside Down uninterrogated, the characterisation here is not dissimilar to that of a rejected false creation, a “realm unspoilt by mankind”, ripe for Vecna’s demiurgic sculpting.

Ted Wheeler: It’s the news. Now indistinguishable from the tabloids.

With this in mind, yet again, the show’s characterisation of Satanic Panic seems severely off base. Yes, there’s a swipe at controlled media and fake news, as the Jason-splitting Vecna-quake hitting Hawkins is fobbed off as simply an earthquake of unprecedented magnitude. But the decade’s Satanic Panic is evidently designed to be dismissed as just that: unwarranted panic, hysteria and false accusation – à la The Crucible and McCarthyism – by virtue of the accused party being innocent (the media report speculation that the Munson murders opened a doorway to hell itself). The actual subtext surely has to be that Satanic Panic is legit, but the targets are wrong, or overstated – D&D etc – such that a patsy gets blamed and the government, ultimately responsible, is able to deflect thanks to the blithe complicity of the media.

I wasn’t entirely persuaded by the decision to kill off Eddie Munson, not necessarily because he’s a memorable new character it’s a shame to lose – he is, but had he been kept on, the only way he could become part of the group would be to make him less distinctive and more homogenous – but because his demise is so contrived and the reasoning so telegraphed, it’s almost meta. The Duffers are obviously wary of offing anyone important, ever since they received a backlash to the lack of justice for Barb, but going in the opposite direction of setting out someone’s demise in luminous highlighter can have the opposite effect to the one intended.

Eddie’s “self-sacrifice”, atoning for running away when Vecna killed Chrissy, failed for me both because it was overly schematic and because it lacks any resonance. After all, it doesn’t really achieve anything does it? Ostensibly, Eddie’s warding the bats away, but they’re aren’t going to be interested in the other humans, seeing as they’re all securely bound by Vecna’s tentacles. If you’re going to kill off a likeable character, kill them off meaningfully; guiltily effective-self-immolation doesn’t count. When Eddie goes back into the Upside Down, I initially assumed he’d realised something important: which would have been what he needed – to go out in a blaze of purpose – rather than being nipped at a bit. Worse still, the Duffers use this moment to dredge up one of the most overused Moby tracks (When it’s cold I’d like to die – previously called upon in Season 1). At least lift something by someone that’s era-appropriate (and I’m not arguing for more Metallica, no).

I had a different issue with Max, whom the Duffers have put through the ringer all season, to the extent of boosting Kate Bush straight up the singles charts on both sides of the Atlantic. Running up that Hill is a masterpiece, don’t get me wrong – which means you’d have to go very wrong not to instantly boost any scene using it. The song is euphoric, triumphant, rousingly anthemic. And yet the Duffers pay it off by having Max’s limbs cracked and broken and her senses switched off (“I can’t feel or see anything. I don’t want to die”). The last time we hear it, it accompanies Eleven/Neo-slamming Agent Smith/Vecna, and from thence comes ruin. Essentially, whether they realise it or not, they turned the song from a signature for overcoming to the soundtrack to failure. Well done, boys!

Will: You’re scared of losing her.

As with Eddie, imperilling Max this way likely comes easily, because the Duffers can’t risk it with the main cast (that is, the cast from Season 1 lot) as there’d be outrage. Well, okay, maybe they could get rid of the Byers siblings and no one would notice… And I’m sure Mike isn’t the only one wondering why Eleven doesn’t just ditch him. Jonathan seems preternaturally aware that Nancy no longer has such the hots for him, which is about as alert as the character has seemed all season (he’s essentially been running on fumes since the end of Season 1, when Steve supplanted him in everyone’s affections, bar Nancy).

I was sympathetic to Noah Schnapp being served a lame duck of a character in the first half of the season, was of a mind this was all down to poor material, but he seems to have embraced Will’s status as a pining wet blanket. Wet, because he appears to be perpetually soiling himself. Sure, such morbid obsessing may well be reflective of teen-angst bullshit, but it simply isn’t engaging to watch, and it’s the only mode Will has, until he reminds us at the end he has another, equally defeatist one. “You’re the heart, remember”, he tells his unrequited Mike. I guess that makes Will Toto.

The Duffers get to have their gay cake and eat it, though, having seized on a very enlightened and self-aware ’80s small-town America (in terms of self-aware teenagers, that is, rather than necessarily town mores). Robin gets to go in for upbeat mooning, plus she’s got the “loveable klutz rocking a Patty Hearst beret” card to play (her designated reciprocator, Olive Oil redhead Vickie Amybeth McNulty is possible too perfectly reflective a kook).

The gulag plotline is considerably better-oiled here, probably because the prison fatigue was broken towards the end of the last Volume. The embryo jars seemed like a conscious nod to (Ryder’s) Alien Resurrection, and if the crosscut crescendos get a bit much, the various subsequent reunions are nicely done (one thing the season achieves commendably is making it seem as if they’ve been apart for an age due to the momentous events and tribulations that have transpired).

Argyle: I know a magical place that has all you need, my brave little superpowered friend.

MVP of the season is, obviously, Argyle; let’s hope he’s given a steady fuel of Purple Palm Tree Delight in Season 5. Stranger Things Season 4 is, as a whole, agreeable entertainment, if entirely dubious in its thematic undercurrents. But that’s to be expected. Almost as dubious as trying to revive someone by reading them Stephen King. The Talisman may be fantasy, rather than horror per se – and rather on the nose-ly dealing with alternate universes – but I don’t think that’s an excuse. The real excuse is that the Duffers are adapting it for Netflix. 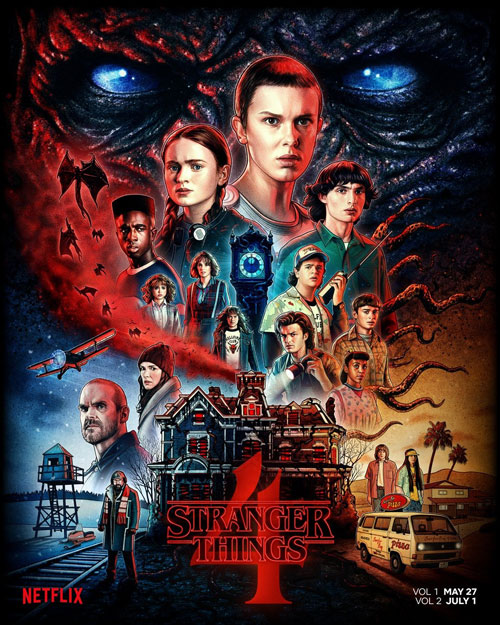