I learned everything about people from Thomas. Everything.

A big summer movie that isn’t a sequel, superhero or superhero sequel animation would, you’d have thought, be welcomed by critics wont to complain about all three. But it seems Bullet Train has fallen foul of being too wanton and unapologetic in its cheerful ultraviolence. Meaning, it’s the kind of picture that gets dismissed as soullessly derivative, when it’s actually a pretty good variant on wanton, unapologetic, ultraviolent Tarantino/Ritchie/Vaughn originals. Sure, it’s a strictly functional affair, but its expertly put together by David Leitch, peppered with engaging performances, characters, twists and quirks, and only about twenty or so minutes too long.

Had Bullet Train ended with a station showdown when Michael Shannon’s White Death shows up, it would have been altogether more satisfying (even better yet, it would have been a tight 100 minutes, rather than a needlessly overextended 126). Best of all, the movie would have ended after Aaron Taylor-Johnson’s Tangerine arterially sprayed out everywhere, since he’s by far the most engaging character in the semi-ensemble.

Taylor-Johnson is just about the most bizarrely inconsistent presence in movies today, a complete non-entity when attempting to play straight roles (Godzilla), but invariably striking gold in support (often with visage-obscuring facial hair). This is no exception, as his foul-mouthed, aggro cockney tache man exudes everyone else off screen, including “twin” brother Lemon (Brian Tyree Henry, delivering a decent-enough accent and throwing in a several obligatorily diminishing “white boy” and “white girl” epithets, but mostly attempting an extended analogisation of humanity per the sacred wisdom that is Thomas the Tank Engine).

Obviously, any notion of character and motivation here is a means to an end, the end being the visual and aural impact of any given set piece Leitch is fashioning. Which is fine; there isn’t the hand-crafted appeal found with Guy Ritchie characters, of the sort that makes The Gentlemen rise above his faux-hard-guy conceits into something truly delightful. But the knockabout quality is still hopped up and sprightly, particularly so whenever anything involves Pitt’s Ladybug, the twins, or the various obstacles – snakes, cartoon characters, poisons and curious carriages – and switcheroos of targets and suitcases. Not to mention ongoing cases of mistaken identity and misunderstanding.

Less successful is the “serious” motivation, so the Elder (Hiroyuki Sanada) and his revenge quest, the blackmail of his son (Andek Koji’s Father), and conversely the revenge quest of White Death (Shannon) and his blackmailing daughter Prince (Joey King, very good) is central to events but of peripheral interest and concern; unfortunately, the playing out of these subplots takes up most of the backend of the movie, and even a runaway train (culminating in runaway CGI) can’t make it as engrossing as the violent banter that went before.

Leitch has been “slumming it” with his last couple of movies, concentrating on developing a commercial rep at the expense of the kind of propellent kineticism that made Atomic Blonde such a vibrant experience. So while Deadpool 2 and Hobbs & Shaw doubtless saw him fielding all sorts of offers, neither suggested his best foot forward. Bullet Train is much closer to the kind of fare I was expecting from him post-Blonde, even if it’s ultimately somewhat lesser because it is, let’s face it, as alluded above and by the movie’s detractors, sub-Ritchie and Tarantino. Which doesn’t make Bullet Train a disappointment, but this kind of glib guns-and-guts content does tend to be more satisfying if it comes via an overall sensibility, a writer-director package.

(Atomic Blonde had a relatively easy ride from critics, but then, it had a female lead and wasn’t accused of westwashing – or even westBerlin washing. But hey, its swings and roundabouts, as the Prince was a boy in the book, and doesn’t the name carry a cool intergender vibe? Add to that Brad going by the name Ladybug and Channing being gay, and surely there are more than enough credits in the woke bank? No? Ah, okay.)

The eclectic casting is very much in the Ritchie mould, though. Logan Lerman spends most of the movie playing dead, and does so much more proficiently than Daniel Radcliffe (mercifully, he isn’t one of The Lost City alumni in this, albeit more precisely it should be Bullet Train alumni appearing in The Lost City). I had no idea who Bad Bunny was – mercifully, again, noting to do with Vincent Gallo – but I guess he makes an impression of sorts. Heroes’ Masi Oka is a conductor/ticket inspector. Ryan Reynolds has one scene (I don’t think he speaks. It might even just be one shot). Zazie Beetz’s Hornet has no sooner shown her face than she’s recipient of some especially bitchy karma. Shannon is the only really disappointing choice, as he can’t help but be Shannon in everything, and I was hoping for a more impressive guest spot after all that build up (I dunno, maybe Keanu?)

And obviously, Bullet Train also features at least two actors on the deceased list – both of whose characters survive the movie – so I’m presuming Brad and Sandra clones/avatars/doubles are being put to all-round-productive use and are pretty reliable, what with the actors’ back-to-back new-buddy appearances in this and The Lost City. Although, Mr Bullock looks 100-percent plastic, which fitted right in with the 100-percent virtual-looking The Lost City; she’s somewhat more incongruous here. Pitt, meanwhile – who’s death was announced on a recent GQ cover, and who, like Bullock is talking retirement, retirement obviously being in the Blade Runner sense of the word – simply looks like they took a Pitt suit out of the closet circa 2012. Brad, or the guy playing Brad, performed 95 percent of his own stunts, so we’re reliably informed by Wiki. You can also bet, were Brad still in the land of the living, there’s no way he’d have approved his mug looking like that on the posters.

Train Passenger: I do love an accent.

And hey, Channing Tatum, doing penance and/or on the imminent permanent departure list also turns up. Yeah, sure. They all get on so well, they just can’t resist (Wiki – again – tells us this was filmed late 2020 to early 2021, so I can’t necessarily make sense of the Guantanamo-ness of it all). Notably, and conveniently, there was barely any need to leave a soundstage for most of the production, being as it is the perfect virtual environment.

Having identified that Bullet Train is primarily a stylistic exercise, is there any discernible point to it all? The tropes involved, of revenge for families and from within families, in the name of bereavement and for emotional slights perceived, are at best perfunctory (The Elder’s background is depicted via a hack-and-slash rain-soaked bloodbath voiceover designed to provoke a response to the visceral horror of it all, rather than one of empathy). The Elder is compared and contrasted with White Death in terms of moral grounding; both want revenge for their loss and both have profoundly disappointing sons. Albeit, while White Death’s plan involves the sacrifice of his, the Elder merely prioritises his grandson over his son, and they experience ultimate rapprochement. White Death’s daughter’s psychopathy is equally explicit, willing to murder a child in order to guarantee the death of her father. But these are all gradations of the formula.

Ladybug is nominally reformed – he doesn’t want to kill people, but still wants to do the job – but he doesn’t appear to be remorseful in anyway. Plus, he’s repeatedly shown not to have processed the motivational wisdom that led to this choice. Is Ladybug a good guy? We’re supposed to think so, clearly, although it would be more convincing, had he got out of the business entirely (if he expected to deal in such matters without violent confrontation, he’s as batty as his rumpled fashion sense. Of which, his reaction to blood splattering all over his shoes might be the funniest in the movie).

The Elder and the Father are also let off the hook, presumably, for being noble and/or sympathetic figures. As is, curiously, Lemon. The latter development makes little sense morally, particularly as he professes to a higher understanding of others (the Thomas readings), yet has no qualms over his chosen profession. He’s the sensitive hitman, to a degree (while also evidencing that, per current ordinances and so inverting prior form, the black character survives).

Lemon’s choice of inspirational works is also peculiar. After all, he proudly proclaims an understanding of human existence from the study of anthropomorphic machines. Essentially, he takes his cues from a transhumanist text, underlining that his appreciation of the value of humanity is fundamentally warped (yeah, I know, Rev W Awdry just liked his trains).

I’ll admit, I haven’t been keeping up with this summer’s movies, mostly because they haven’t piqued my interest (I’m aware everyone in the world and their dog, or goose, has seen Top Gun: Maverick, but… I can wait). This is one of the few that did, mostly because I appreciate a director who can put together good, coherent action, and Leitch is at the top of his game (on that score, I’d say he easily edges previous collaborator Stahelski, even if Chad, by sticking to the Wicks, has a better hit ratio). And because the trailer made it look like fun.

And for the most part, Bullet Train is that. There are times when resorting to a needle drop for any given slice of action feels like it’s an idle crutch, but even then, the choices tend to be distinctive and original. Sure, it’s a movie doesn’t know when to quit, but what’s new? And for the first ninety minutes or so, it’s dealing a convincingly winning hand. 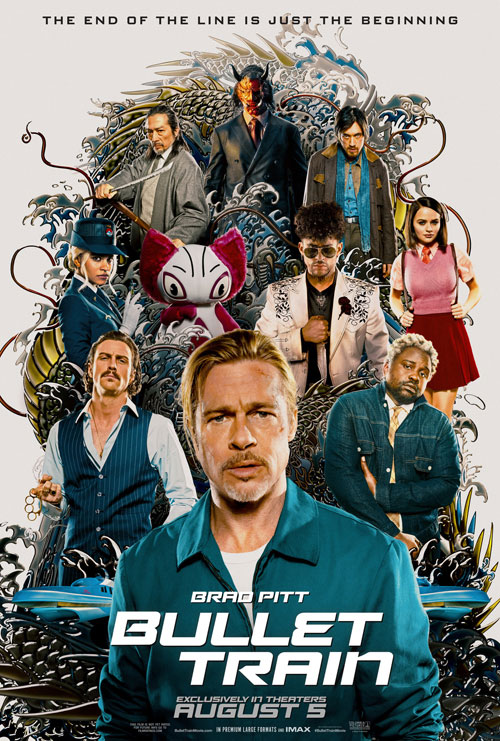