I didn’t do it with me nose.

It probably shouldn’t be a surprise that My Left Foot loads the dice in its triumph-over-adversity tale; to have done otherwise would surely have kept the Oscar from Deserving Daniel, and would almost certainly have forestalled its Best Picture nod. Nevertheless, I’d remembered it to be much less beholden to such savvy stirring of the emotions, less pressed into the service of aspirational highlights and rousing vignettes, perhaps because its working-class Dublin milieu is a far cry from The Theory of Everything’s rarefied Oxbridge atmosphere. They’re very much on the same page, though, delivering smooth, palatable disability dramatics, just with some colourful effing and blinding to suggest this one is a rough-and-ready slice of life.

Essentially then, My Left Foot, for all its “authentic” vernacular, is your run-of-the-mill sanitised biopic, complete with ending the story on a high note (Christy Brown’s marriage to Mary Carr) and opting out of what happened next. Which is fine, if that’s what you need to get more bums on seats. But you can’t then complain when there are accusations, justified ones, that it lacks something and the telling is desperately pedestrian, unable to locate an effective “in” to the story, such that it foists the musty old, “remembrance of times past” flashback structure (in this case, via Christy attending a charity event).

Anne Billson (The Film Yearbook Volume 9) was the rare critic at the time who cut My Left Foot no slack, facing down all points of contention where her peers usually fall in line to commend such fare. She not only acknowledged the typical trait of the biopic – “the narrative ambles on from one scene to the next without prospect of respite: edited highlights from its subject’s life, a few chuckles, some tears…” – she also addressed the evergreen vote-winner tack for awards-friendly movies of this ilk: “Suffering is perceived as a holy condition, and those who suffer are afforded a sainthood”. This, combined with director Jim Sheridan and cinematographer Jack Conroy’s approach to the visual character, a “brownish tinge which in British television terms denotes nostalgia, honest poverty and/or home-baked bread”, made the whole enterprise not a little rich.

Many of her criticisms occurred to me separately as I rewatched the picture. It’s one I never warmed to enormously the first time, but I began to find it simultaneously overly manipulative and pervasively unchallenging. Time Out’s John Morrish noted the liberties My Left Foot took with the Brown’s life, and they’re ones that, at points, become actively ludicrous. In particular, the “What is it Lassie? There’s a kid trapped down the mine? Fetch help, Lassie! Fetch help!” approach to Christy’s heroic acts (“A chair-bound superhero” Billson calls the character). Witness young Christy (Hugh O’Conor, later of The Young Poisoner’s Handbook) fetch help (Lassie) after pregnant mum (Brenda Fricker, the impossibly perfect vision of the best mother ever) takes a tumble down the stairs. And then later, transformed into Dan the Man, using his weight to open the door to where dad (Ray McAnally, stern but caring) has collapsed from a heart attack. Because mum obviously couldn’t have done it much more swiftly and convincingly herself.

Other such instances abound. Too much aspirational polish. Christy plays football! Christy has a plan for stealing coal! Christy and his family start a pub brawl at dad’s wake (and what a lark it is)! Christy and mum build a studio for Christy! Elmer Bernstein’s score only adds to that slightly treacly – treacle splashed with mud, or peat – quality. As Billson suggested, this is in lieu of any idea quite how Christy scaled his daunting peak: “we have no more idea than his startled family how he taught himself to write and spell”. The same applies to composing and typing. She invokes George Romero’s Monkey Shines – a movie I haven’t seen since, but I recall being impressive – and notes the salient difference: “he is making a film, not airing his sensitivity and compassion”.

I enjoyed most of the performances, archetypes as they are. Fricker (winning an Oscar), and McAnally (a BAFTA) elevate anything they do. Adrian Dunbar and Cyril Cusack make their presence felt in small roles. And Fiona Shaw is central to easily the picture’s best scene, one both Billson and Pauline Kael (nearing the end of her reviewing career) singled out admiringly. Christy, who has become infatuated with Shaw’s Eileen Cole, his tutor/carer, is incandescent with rage when he learns at a dinner that she is engaged to Dunbar. His awful, venomous behaviour is squirm-inducingly riveting, charged and compelling in a manner absent from the rest of the movie (Billson: the film “for an all-too brief moment, enables the audience to exercise its imagination and take a guess at what life must really have been like for a heart and soul trapped in the broken body of Christy Brown”).

Kael, contrastingly, fell for My Left Foot wholesale, comparing Daniel Day-Lewis’ performance to Sir Larry as Richard III (twice!) and calling it a “great, exhilarating movie – a comedy about suffering…” Billson was much more cynical about the leading man’s turn, noting he was “working hard at becoming Britain’s answer to Meryl Streep” and that fellow wheelchair-using Oscar contender Tom Cruise didn’t stand a chance, as Lewis “gets to drool, suffer from cerebral palsy and do an Irish accent”.

Anyone assuming abled actors could play disabled individuals without a murmur of discontent at the time should note Morrish’s review, where he suggests Day-Lewis “transcends the carping about casting an actor without cerebral palsy”. All the same, there’s a certain irony to his winning an Oscar for this, given that, less than a decade earlier, misbegotten children across the British Isles were being reprimanded en masse for Joey Deacon impressions. Day-Lewis’s is undoubtedly an accomplished performance, but it’s in no way beyond reproach or exempt from doubts over its legitimacy.

Reputedly, Day-Lewis remained in character throughout the shoot, to the frustration of crewmembers having to push him around. Less authentically, however, he could only attain the necessary dexterity with his right foot, so requiring frequent mirror shots. Anthony Holden in The Secret History of the Hollywood’s Academy Awards also expressed cynicism about the actor’s presence on the Oscar trail, noting how, only months earlier, his career had seemed in tatters after his on-stage Hamlet breakdown; now, here he was, coasting the chat show circuit like a pro.

This was also a very early case of Miramax and their “shrewd piece of Oscar campaigning”. They “seized the moment”, rather than the day, earning nominations that year as distributor of this, Sex, Lies and Videotape and Cinema Paradiso (the latter a win, having previously pulled off a similar feat for fellow Best Foreign Language film Pelle the Conqueror the year before). For My Left Foot, the indie rustled up a meeting of Hollywood and Washington at a “Reception and Celebration Supporting legislation for Americans with Disabilities”. Quite hilariously, they also inflicted a double dose of bad taste in their attempts to manipulate votes from their Academy marks: at the accompanying movie screening, they placed a White chocolate left foot in small white box on every seat. Not only that, they managed not to leave this gift on the wheelchairs. And you wonder why the Weinsteins went the way they did.

Down and Dirty Pictures’ account throws further shade on this saga of success. Harvey managed to convince UK production company Granada’s head of programming that “it had to be marketed hard because Day-Lewis was a romantic lead, and nobody wanted to see him folded up on himself like an accordion. Along the way, of course, he promised he would get the actor an Oscar”. Weinstein paid $3m for worldwide rights, and for the US release, he “straightened out some of those rough Irish accents” (a fledgling example of his scissor-y hands). With little budget to pony up campaign treats – well, aside from those white chocolate left feet, I guess – Miramax had to rely on screener tapes: “The tapes are what did it for My Left Foot” claimed Harvey, suggesting they “gave us parity’ with the big boys. There’s undoubted admiration for his nous in the book, less so his more temperamental foibles.

Peter Biskind noted “Harvey loves to quote Day-Lewis as saying ‘There’s only one part of you that works – the ability to pick scripts and pick movies. Otherwise, you’re a complete disaster as a person’”. Underlining this is the tale of Harvey trying to finagle his head of acquisitions Alison Brantley’s Oscar-night ticket away from her (she had been babysitting Day-Lewis in his Oscar bid, and he gave her a ticket to the event in gratitude). She knew her days were numbered for refusing to acquiesce: “You don’t stand up to Harvey”. Brantley was commendably unrepentant: “I went, and I sat next to Daniel, and it was great”. The movie would make $14.7m stateside, an unqualified success for a picture that cost less than a million. Biskind reported however, that producer Noel Pearson still hadn’t seen a cent of profit two years after its tidy performance.

None of which is to single My Left Foot out for blame; it’s very rare for the biopic to deliver the goods, and even someone goosing the material up as much as Oliver Stone did in the year’s other disability contender stumbled through literalness. My Left Foot may have won some, but it isn’t a winner where it counts. 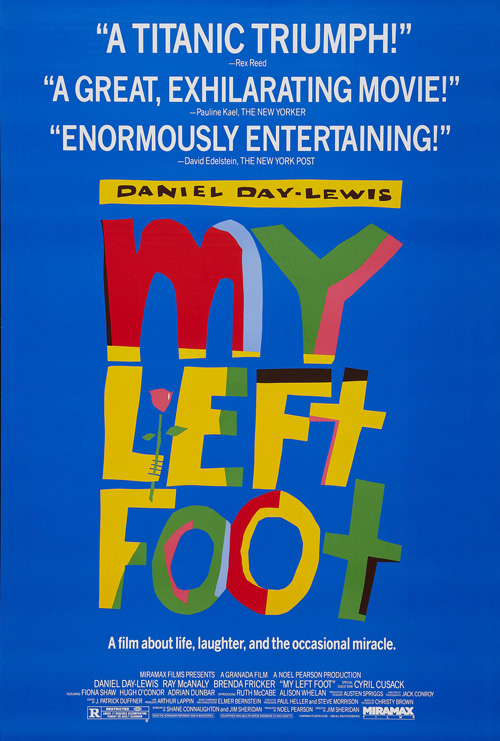 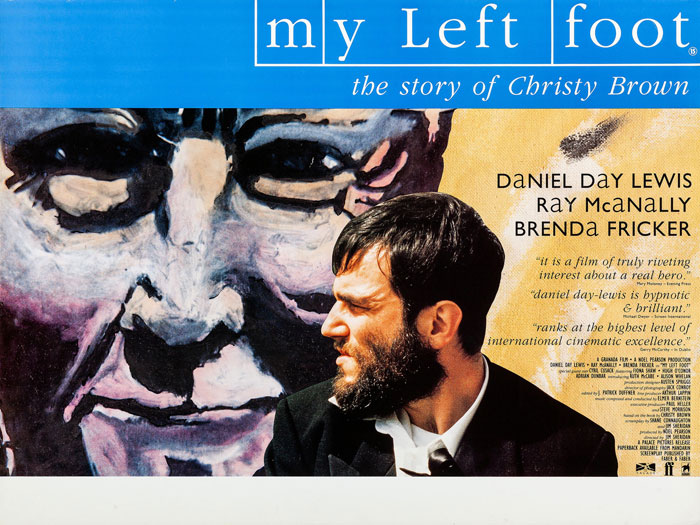