The omens never seemed promising for Uncharted, which over the span of almost a decade and a half of development hell, went from a Mark Wahlberg starrer to… a Mark Wahlberg starrer. As unwanted as a Wahlberg Nathan Drake was, though, Tom Holland is straight-up absurd as the video games’ main protagonist; he resembles a twelve-year-old with photoshop pecs, and there’s still no sign of his voice breaking any time soon. Holland’s essentially the new Michael J Fox: tiny, likeable – the teeny girls just love him – and at a stage in his career when he’s still nursing the illusion he can do any damn thing. He will learn, by hit and miss, he can’t.

Rather like Michael J Fox’s character in The Hard Way. Having attempted serious actorly roles during the ’80s, to public indifference – Bright Lights, Big City, Light of Day, Casualties of War – Fox expertly regrouped and mocked himself as shallow movie star Nick Lang, star of Smoking Joe Gunn, an Indiana Jones-type character then embarking on his second outing in Smoking Gun II. Holland’s ride should last at least until he outgrows Spider-Man, though. So probably until he can get into a bar without showing ID. Which, at this rate, will be somewhere around the age of forty.

As for Uncharted, it has confounded common sense and proved a relative hit, in much the way that both (actually, all three) Tomb Raiders found an audience despite being quite dreadful. There’s undoubtedly an appetite for Indy-esque versions of Indy-esque video games, but no one has yet made a good one.

Cocking a snoot at any kind of fidelity to the source material – attempting to tap Holland’s teen-idol cachet, basically, at the expense of the games’ core players – Sony finally got Uncharted off the ground as an origin story: Young Nathan Drake and the Big Boy Pants of Destiny. Which means Holland’s Nick bears zero resemblance to the game version. I know this, partly because I’ve played the game (the first two, anyway) and partly because it’s readily apparent Holland’s Nathan Drake is the same as his Peter Parker, sans the web shooters.

Sony has, of course, displayed prodigious ineptitude with its various franchises for a while now, mouldering things to the extent that Disney had to swing in and save Spidey. Their determination to plough ahead with Spidey spinoffs has, surprisingly, yielded one genuine marvel (Into The Spider-Verse) and one movie that made an enormous amount of money on the basis of its star’s idiosyncrasies, rather than its director’s chops. Which is where Ruben Fleischer enters Uncharted’s orbit.

One might be charitable and suggest Sony was having so much trouble pinning anyone to the long-gestating property, they decided the hell with it, give him a shot. More likely, having shown zero aesthetic judgement in respect of their movies over the last decade, they figured Venom’s $855m gross = Genius Auteur.

Avi Arad as producer probably should have been warning sign enough, and there were few points during Uncharted’s development where it seemed like something to anticipate. David O Russell was perhaps a left-field director pick, but his bringing Wahlberg as Nate (and Robert De Niro as his dad and Joe Pesci as his uncle) disqualified any potential positives. Neil Burger, Shawn Levy, Dan Trachtenberg and Travis Knight were all successively attached (and all, bar Levy – actually, probably including Levy – were more promising than who we got). The only other potential lead mentioned was Chris Pratt, evidence of the dearth of anyone of a certain age group able to fill action shoes rather than particular merit for the project.

We’d surely only have hit the Nathan Fillion jackpot had Joss Whedon or James Gunn come on board; presumably they were too busy, fuelling later #MeToo revelations and making “just jokes” about paedophilia respectively. Fillion actively forwarding himself for the role probably actively put any incoming director right off (because they want it to be their thing), but I broadly agree with those suggesting he’d have been a good choice. Maybe not a profitable one, but a good one.

What we have instead is an entirely vanilla account of the series’ potential, unremarkable from top to bottom. Sure, Holland and Wahlberg have a certain chemistry, but I haven’t known Holland not to show an easy rapport with anyone he’s played against. Wahlberg’s fine, I guess – he tends to fare better in a supporting role than front and centre, where his essential blandness shines through – but he’s as much Sully as Holland is Drake. And he needs to grow a better tache for next time – or get a prop one.

As for the supporting cast, Antonio Banderas is as forgettable as he tends to be in most of his Hollywood roles, so it’s appropriate he’s killed off two-thirds of the way through. There’s scant hint of character, less still meaty dialogue in the screenplay, courtesy of Rafe Judkins (Agents of S.H.I.E.L.D., The Wheel of Time) and Art Marcum & Matt Holloway (such unspectacular franchise fare like Punisher 2, Transformers 5 and MIB 4). This is a movie boasting lines like “So, er, why did you decide to become Indiana Jones?”, “Nuns. Why has it always gotta be nuns?” and “I’m kidding, I don’t really know who invented the cigarette”.

Consequently, Tati Gabrielle, emerging as the main villain, has to make do with being straightforwardly imperious, rather than witty, while Sophia Ali just has to make do. Steven Waddington is given a couple of amusing scenes as the Scotsman, mainly for Nate being unable to understand him, while Pilou Asbæk, who’d show up to the opening of a box of Frosties, is in the mid-credits scene.

The plot is a sub-Robert Langford, sub-National Treasure treasure hunt for the Magellan expedition’s gold. You know, Magellan, who purportedly circumnavigated the freemasonic world between 1519 and 1522. The key to finding such troves of lost loot or artefacts, surely, is to make it appear as if there’s a semi-feasible trail. Raiders of the Lost Ark managed that commendably. There’s never such a sense here, with various extraneous and unlikely connective leads, relics and maps, along with centuries-old Rube Goldberg devices. All, it seems, conceived by the inventive expedition survivors. A lot of time and expertise on their hands, then.

Early on, there are a couple of vaguely decent set pieces; Nate causes a distraction at an auction so Sully can steal a vital piece. A sequence in and around and escaping a Barcelona bar. But the big rockin’ opener (resumed later in the movie), involving a plane and its emptying cargo, and the grand climax featuring helicoptered Magellan ships are empty, overtly green-screened attempts at spectacle that serve to highlight Fleischer’s already evident limitations. He’s a TV director repeatedly thrown big budget keys. His skillset was for Zombieland’s measurements, but he shoots Uncharted exactly the same way as Venom, which was shot exactly the same way as Zombieland. Which means he’s comfortable with scenes involving his performers or very contained action, but entirely flummoxed by the call to paint on a broader canvas.

There’s a message in the Uncharted mix: some reheated gruel about friendship being more important than riches. I was going to say the business with Nate’s brother is typical of the sort of backstory Hollywood vainly believes adds something, but it appears Sam is part of the games as well (belatedly, as he shows up in Uncharted 4). The movie’s success will doubtless see Sony hasten towards a hacky follow up, much as Lara Croft: Tomb Raider was poorly received, made money and led to an even more poorly received sequel. I’d advise Holland to make as many inroads to alternative franchises as he can now, while he has the chance. How about Little Jimmy Bond, following in the illustrious footsteps of Woody Allen? He’d be a shoe-in. 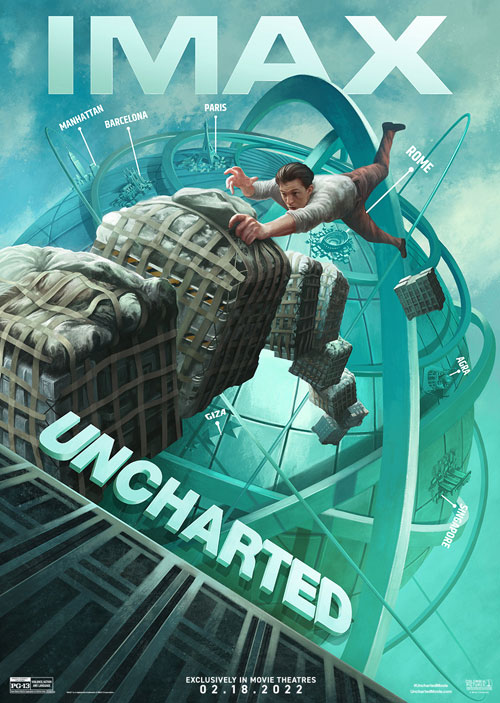