Extra ten million to the first guy to put a bullet in this Ken doll’s brain.

Somehow, all those MCU movies, with the immaculate pre-vis work, had a great many convinced – studio execs included, doubtless – that the Russo Brothers were auteurs of the first order. And somehow, the wretchedness of Cherry did nothing to dent their reputation in any serious way (perhaps because it was tucked away on Apple). The Gray Man, a $200m Netflix monster, may be less forgiving, however, since it ought to confirm to a great many that the siblngs’ action chops are about as convincing as Anthony’s rug.

Lloyd: I can kill anybody.
Fitzroy: Maybe not anybody.
Lloyd: We’ll see.

Way back with the release of The Winter Solider, I was bemoaning how, had someone with genuine flair and acumen been employed as director, the material might have been truly elevated. Kevin Feige was less interested in such spurious factors than having a couple of yes men on call, ones who would deliver the goods without causing a fuss while letting the effects guys get on with the important stuff. Which, when it came to their third and fourth outings (Infinity War/Endgame) was probably 75 percent of the picture. Netflix has no capacity to perceive such distinctions, of course. They simply look at the box-office and assume they’re a couple of geniuses. Admittedly, that doesn’t explain Rawson Marshall Thurber, but the comparison is an apt one in terms of ability to martial budget and spectacle.

Lloyd: You wanna make an omelette, you gotta kill some people.

Dare I say it, The Gray Man might actually have benefited from the visual Tourette’s syndrome that was Cherry. The brothers might not have convinced they had any idea what they were doing or why, but you could see they were doing it. The Gray Man is mostly of the order of the bland, homogenous digital soup we’ve come to expect from mega-budget Netflix offerings (Red Notice, The Adam Project), with cinematographer Stephen F Windon (a fixture of F&F) ensuring you will remember nothing of merit. There’s an occasional exception with this output – when they employ Michael Bay – but their big movies as a whole are singularly uninteresting looking.

More pertinently, The Gray Man flaunts itself as a non-stop action vehicle; it’s an on-the-run chase thriller. It wants you to interrogate those big, bold set pieces, to observe the shonky CGI, scrappy spatial geography and half-cocked kineticism in all their dubious lack of glory (seriously, look at the effects work in the plane sequence, and you’ll be wondering if Netflix are just inventing half their budgets; per the laughable The Irishman de-aging, you’d be forgiven for assuming there’s some serious money laundering going on).

Lloyd: You know what makes me sad, Don?
Fitzroy: Your small hands?

Nevertheless, the Russos are nothing if not canny. They know how to package a product. They even got Tom Holland on board Cherry, fat lot of good that did. So here, they have Feige go-to-scribes Christopher Markus and Stephen McFeely sharing screenplay duties. And they’ve brought along Cap himself, Chris Evans, as the villain. Their trump card is blockbuster-reticent Ryan Gosling, however, since his only other flirtation to date is Blade Runner 2049 (and you can argue whether that counts as a tentpole).* Plus, they’ve got a popular airport novel from Mark Greaney, even if it bears little resemblance to the movie – funny that, huh? It’s only a shame Christopher McQuarrie, who knows a thing or two about clean, precise, coherent action sequences, wasn’t able to bring a version together about five years back.

There are ten novels in the series, with another due next year, so Netflix are presumably hoping this is no flash in the pan (and given their metric, it probably will count as a big success for them). Doubtless, all will be due scant attention to the source materials’ actual plots and characters. Albeit, one might reasonably argue that’s neither here nor there when they function as massive CIA apologias (Greaney has also taken up the mantle of the Tom Clancy legacy, so all his ducks are certainly in a row).

Accordingly, The Gray Man presents us with your standard Hollywood good CIA spoiled by a few bad apples; it’s even one that was honourable and true, back in the good old days, when Billy Bob Thornton’s Donald Fitzroy as calling the shots. Fitzroy began the Sierra programme, approaching Gosling’s Six – Court Gentry, who sounds like he should run a holistic detective agency, but hasn’t yet been named in the movie take – in prison with the promise to commute his sentence if he comes to “work for us, the CIA… to kill bad guys”.

By the time of the movie’s timeframe, per crooked CIA group chief Denny Carmichael (Regé-Jean Page), they are “all dead or back in prison”; we get to see one of them at least is dead, at Six’s hands, in the opening sequence. Six discovers he’s been sent to cover up Four threatening to blow the lid off Denny’s dodgy CIA activities – remember, he’s a bad apple, not like the Agency as a whole – and takes off with the evidence. He’s soon hotly pursued by former CIA guy turned private contractor Lloyd Hansen (Chris Evans), eager to kill as many people as possible and create as much carnage as he can along the way. Suzanne Brewer (Jessica Henwick) protests that Denny’s “sending a guy who’s a sociopath”, but come on: this is the CIA, lady. The alarm would be sending a guy who isn’t one.

Lloyd: Don’t say “preternatural” to me. It’s an asshole word.

The Russos throw in standard conspiracy talk to further untarnish the Agency. The activities Denny has been approving include “assassinations, torture, bombings. All unsanctioned. With no regard to collateral damage” and Fitzroy concludes “This is shadow government stuff. Which, bluntly, is above Carmichael’s pay grade”. So Denny is not working at his own behest, and if it wasn’t for the damn meddlesome shadow government, the CIA would smell of roses with its sanctioned assassinations, tortures and bombings, ones that do have regard for collateral damage (but nevertheless, just don’t care).

The Gray Man leaves dangling who Denny’s superior is. Early on, I was intrigued by references to the Old Man – “You know, the last person that pissed off the Old Man ended up floating in the Potomac” – but by the end, I didn’t much care anymore. Clearly, though, with Carmichael still in his seat, the idea is to continue the series and reveal more. Whether the Old Man is also the shadow government rep – in the conversation, it’s clear that he’s a CIA superior to Denny and Suzanne – is left open for debate.

The markers of this kind of fare tend to be clear for all to see. You’ve got a trained killer who isn’t a psychopath, for some bizarre, unaccountable reason. Mainly because the idea is for the audience to relate to “good” trained killers (as opposed to bad ones like Lloyd).

Six: Who throws a loaded gun?

Indeed, in Six’s case – unlike McGoohan, there’s no apparent existential rumination – Fitzroy was like a father to him. A father who, like his actual father, introduced him to a brutal way of life. That’s right, dad (Shea Whigham) spent his days burning Six with cigarettes and worse; Six is thus the ideal fodder for MKUltra conditioning, since trauma will make you stronger, a better, more pliable human being (codename or not, Six represents another personality, or alter). The Russos emphasise this during the climactic struggle with Lloyd, where Six, head submerged under water, flashes back to dad drowning him. And so, his super trauma-strength is summoned! He overcomes Lloyd! Praise be! (See also Eleven in Stranger Things.)

Most mirthful – or sick making, depending on your mileage – in all this, is that the Russos also make time for the classic “kind to children and animals” element in the psycho killer’s personality. In contrast to Lloyd, whom Fitz asks “…do you spend most of your time strangling cats?”, Six becomes a surrogate dad/uncle, and much of the proceedings relate to his rescuing Fitzroy’s niece Claire (Julia Butters).

Poor Claire really needs protecting: she has a heart condition! I’d like to call this astonishing shamelessness on the parts of the writers/directors, but the problem is that it doesn’t even really stand out in the scheme of The Gray Man’s flagrancy. I can imagine De Palma taking this project (in M:I mode), and you’d relish the absurd phoniness of it all, because he’d heighten all the melodramatic nonsense and manipulation to the point of artfulness. And deliver dynamite set pieces. But aside from Gosling, Evans and Thornton trading quips, nothing here stands above the parapet.

Lloyd: Would someone mind shooting the man handcuffed to the bench?

Evans is having a lot of fun as dyed-in-the-wool nutter with a “trash tache”. He’s very much in The Iceman mode of a funny killer, but he wears the schtick well (better than Chris Hemsworth, another superhero trying out the sociopath for size on Netflix in the past few months). He’s still ridiculously over-sized, of course (Gosling clearly worked out for his role, but he looks positively puny next to his co-star). Gosling’s part is less showy, but as a traditional action-star part, it does the prescribed job (he has a Sisyphus tattoo; that’s about all you should need).

On the support side, there are no surprises in Thornton’s role – he even dies self-sacrificing himself with a grenade, after former colleague Alfre Woodward has ALSO self-sacrificed herself… with a cigarette – but he does get some decent lines. And he delivers them as only a Bad Santa can.

Ana de Armas is the decent – I know, I know, but go with it – CIA agent Dani Mirandi, helping out Six. She’s as effortlessly presentable as one might expect, only somewhat less dazzling than in No Time to Die. Simply because, for all that movie’s issues, Cary Fukunaga did know how to put an action sequence together. At one point, learning the data they have is encrypted so can’t be copied, Dani suggests “Then we have to leak it to the press” WTF? She’s CIA. What makes her think that would work? Of all the daft ideas in the movie, that might take the biscuit.

Page and Henwick are serviceable. Bollywood star Dhanush shows his action chops in a scene where he bests both Six and Dani. As one might expect, given his representational status, he’s ultimately presented as an upstanding Indian, a decent geezer who was somehow out and about, wantonly killing for the CIA, yet only on meeting Lloyd concluded “They are not honourable people”.

Six: This is just another Thursday.

The Russos also try to make a sentimental thing of Silver Bird, which reached 25 on the Billboard Hot 100 in the summer of 1970; it’s used twice, the second time during Six’s rescue of Claire from CIA supervision. It’s another case of the Russos trying to hit formula, signature blockbuster marks, creating some degree of iconography, yet falling at the hurdle of being distinct, palpable directors. If only their movies stood out and had as much personality as Anthony’s hairpiece, we might be talking something special.

*Addendum 12/09/22: This former reticence is the surest sign that the Gosling in The Gray Man is a different Ryan to the previous one, who let’s not forget was a member of the black-eye club (Vril’d) and ergo no longer with us. 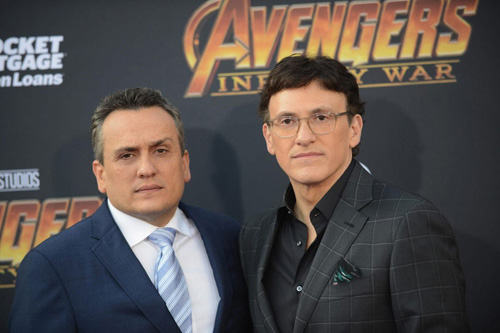 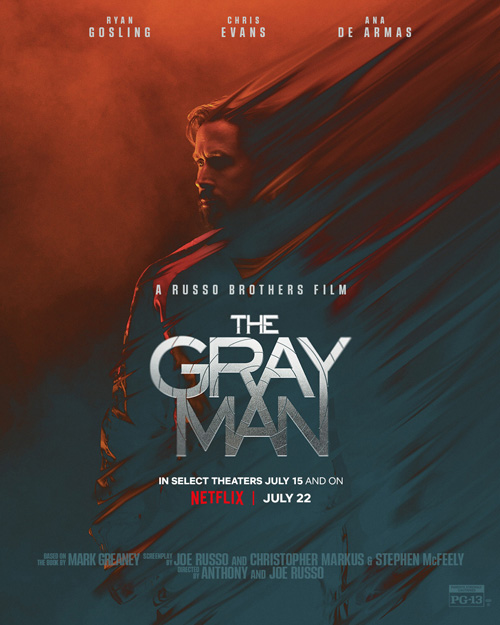