As an adaptation, My Fair Lady is hardly a cinematic triumph. George Cukor brings none of the acumen Robert Wise did to The Sound of Music (or West Side Story), or even the comic-strip brio Robert Stevenson daubed across Mary Poppins. It’s (very) expensive, sumptuously costumed, shot and lit, and rather inert. But as a performance piece, this take on the 1956 Lerner and Loewe stage musical, itself an adaptation of George Bernard Shaw’s Pygmalion, is irresistible.

I certainly can’t countenance the idea that Julie Andrews was robbed of the part. I mean, yeah, she didn’t get to repeat her stage performance, but could that most perfect and precise of performers have been as affecting, adorable and hilarious as Audrey Hepburn? Maybe she could – she essayed the role on Broadway and in London for three-and-a-half years, so she must have been doing something right – but I haven’t seen even a kernel of supporting evidence on screen (and John Gielgud vouched for Hepburn being better, for what it’s worth).

As for the popular idea that Hepburn is diminished through not having sung herself, it may be germane to the purist, but the most important thing is how funny and touching her performance is, which is all her. The criticism of her being too old for the role is probably legitimate, though (35 playing 21; Andrews was 29), albeit nothing out of the ordinary by Hollywood standards; it also has the corollary that the age gap between Eliza Doolittle and Professor Higgins seems less extreme.

Hepburn’s rendition of Wouldn’t it be Loverly? on YouTube sounds perfectly respectable to my tin ear; indeed, I’d argue there’s a note-perfection to Marni Noxon that takes you out of the character and so actively diminishes Eliza at points (Jeremy Brett suffered similar indignity as Freddy Eynsford-Hill, and all reports suggest his singing voice was perfectly fine too). Pauline Kael was blunter with regard to Hepburn’s dubbing, referencing “that dreadful impersonal Marni Nixon voice that has issued from so many other screen stars”.

Whatever the ins and outs of the decision – and it seems very much that Warner Bros did the dirty on their star – it ended up being doubly devastating. Not only was Hepburn humiliated through being cast over Andrews and then having her voice rejected, she was also passed over for an Oscar nomination, with Julie duly winning (the latter famously thanked Jack Warner when she won the Golden Globe; with Oscar, she thanked American hospitality). Which seems like a pretty clear case of being sided against by her peers (leap forward 55 years, and no such fate awaited Rami Malek for Bohemian Rhapsody, fickle as these matters are). Hepburn showed she was above such things by presenting the Best Actor Oscar to Harrison (Patricia Neal, the previous Best Actress winner, had suffered a stroke).

Harrison “charitably” dedicated his award to his “two fair ladies” (having co-starred with Andrews on stage). He was, more characteristically, said to be acutely unimpressed with Hepburn’s casting “Eliza Doolittle is supposed to be ill at ease in European ballrooms. Bloody Audrey has never spent a day in her life out of European ballrooms”. Of course, there’s a thing called acting, but since Rex always played himself (and was accomplished at the same, as you might expect), he might not have been aware.

In The Secret History of Hollywood’s Academy Awards, Anthony Holden was of the view Dr. Strangelove nominee Peter Sellers’ criticisms of Hollywood effectively handed an otherwise shoe-in to Harrison. Kael witheringly surmised “Rex Harrison had already played Higgins more than a bit too often”. She also found time to suggest Hepburn was a “totally unconvincing guttersnipe”. This seems to be a common complaint, per Geoff Andrew in Time Out: “Hepburn is clearly awkward as the Cockney Eliza in the first half”. In contrast, I’d argue her performance in the first half is comedy gold. Her exaggerated bag lady act (“I’m a respectable girl, so help me”) and “simply ghastly accent” are contrasted perfectly with Higgins’ meticulously snobbery (“Why can’t the English learn to speak?”), and to sparkling effect.

Indeed, My Fair Lady is on a high all the way to the Intermission, the high being the just preceding visit to Ascot, and Eliza traversing the terrain of gutter talk with now-precise diction and her enthusiasm for the race itself (“Move yer bloomin’ arse!”) The subsequent attendance of the embassy ball is where My Fair Lady peaks; I enjoyed Theodore Bikel’s imposterologist. I also note Elite monster Baroness Rothschild was at the ball as the Queen of Transylvania (you just can’t make these things up, including that Hepburn would later be a guest at that 1972 Rothschild masked ball, the one with all those freakish photos). Good the scene is, it means, per Kael, “The film seems to go on for about 45 minutes after the story is finished”.

The blame for which is surely at the door of Cukor and Alan Jay Lerner (adapting his stage work), who should have recognised that a judicious use of scissors was necessary. Songs wise, there are a good five that are keepers (so not quite boasting The Sound of Music’s batting average), which is enough to be getting on with. However, with Cukor’s inertia behind the camera, you do notice it when the material hits a soft spot.

Doubtless this is sacrilegious to some, but I’d happily have lost the Stanley Holloway/Alfred Doolittle subplot, which adds little of substance and never really comes alive in the way the main scenes with Harrison, Hepburn and Wilfrid Hyde-White (as Colonel Pickering) do. Holloway’s great in, say, Passport to Pimlico, but here, Alfred and the studiously stagey surrounding performances appear to arrive unfiltered from the musical. The character is far more entertaining when Higgins is talking about him – “… a certain natural gift of rhetoric. That’s the Welsh strain in him”; “A philosophic genius of the first water”; “One of the most original moralists in England” – than in person.

It’s many years since I last saw My Fair Lady, so I had no recollection of precisely how the shebang ended, except that Higgins and Eliza were reconciled and their mutual attraction affirmed. That it doesn’t leave them on at least an equal footing surprised me slightly, with Eliza adopting her submissive tone (“I washed my face and hands before I came, I did”) and Higgins assuming his superior one (“Where the devil are my slippers?”)

This could be argued as playful, but if they were going this route – which differed to Shaw’s intent for Pygmalion – they needed to embellish the change in Higgins more affirmatively. Certainly, I don’t buy he’s going to develop in any substantive way, so he will likely make Eliza’s life a right pain. Much of the fun of Higgins – yes, fun! – is that he is both sexist and classist. But as energising and hilarious as this is in the first half of the musical, the very same qualities make him a tedious, tiresome irritant during the second. You’re willing him to recognise his own limitations in order to allow love in, and I don’t think I’ve Grown Accustomed to Her Face is sufficient to do that on its own.

Ben Neutze argued “Shaw exposes Higgins for the hypocrite and misogynist that he is, but the musical choices in My Fair Lady sometimes let him off the hook”. I’d suggest it’s the ending that does it, rather than the songs. Charlotte Atler held that “Their musical is not about a genius attempting to transform a weak woman. It’s about a strong woman attempting to retain her identity in spite of the controlling machinations of a small-minded man”. Which is kind of fair, but going too far in the opposite direction. Most important is My Fair Lady’s destination, and it’s in a very different place to the emancipation Shaw insisted was all-important. He resisted Eliza-Higgins endings to the play; his take was that Eliza would marry Freddy and open a flower shop with money gifted by Pickering. I’m not particularly arguing for fidelity to Shaw’s intentions – which represent practicality, rather than freedom – but the in-between ground of the movie’s conclusion is thematically unsatisfying to all.

Obviously, My Fair Lady wasn’t the Best Picture out of the Oscar nominees that year, but it remains a perfectly respectable pick, only diminished slightly by the welter of musical nominees and winners in the surrounding decade. It’s telling that Cukor had directed little of note since the A Star is Born remake a decade earlier, and would direct little of note subsequently (Something’s Got to Give, famously Marilyn Monroe’s last and unfinished picture, would be remounted as Move Over, Darling). My Fair Lady, shot entirely on soundstages, is handsome but static, was expensive ($17m – $156m inflation-adjusted!) but profitable ($72m accounts for the US only, but $659m inflation-adjusted is a tidy take). It’s the kind of filmmaking that would soon come a cropper, with the likes of Camelot, Dr. Dolittle and Hello, Dolly! underperforming or flopping, but at this moment, the musical goldmine was still tapping rich veins for everyone. 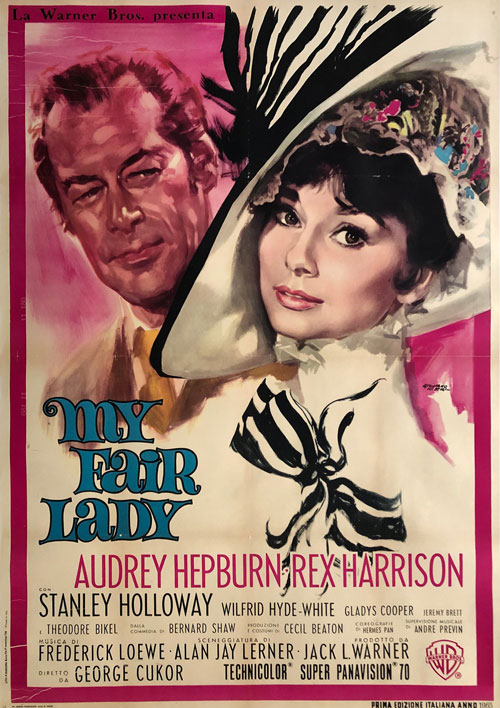 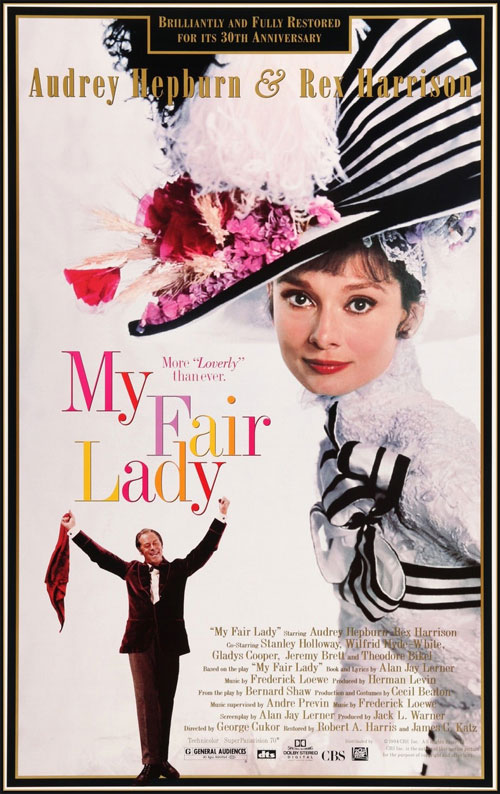