Don’t blame me, madam, if you chose to go abroad to do your shopping.

Ealing Studios’ “What if?” scenario yields several raw reminders of an inflexible establishment behind its genteel, gently playful exterior. A few years later, The Man in the White Suit would devastate supply-demand economics and make very clear what a farce that whole ball game is. Passport to Pimlico does something similar, albeit in even less polemical form, with ideas of concealed history and personal sovereignty. It has been dismissed as amiable but toothless, but its message is as unmistakable as Sidney Stratton being left standing in the street in his shirt and underwear.

Much of the commentary on Passport to Pimlico, however, has reasonably focussed on its exhumation of the Blitz spirit, the residents of Miramont Gardens coming together as one for the greater good. While the picture does indeed boast such sentiment, it transposes resistance to the Hun to fending off the suffocating tentacles of the British establishment. These Pimlico residents live on the doorstep of a bomb site; an unexploded – then exploded – specimen leads to the reveal of treasures in a buried cellar. Treasures testifying, per historian Professor Hatton-Jones (Margaret Rutherford), to the area being legally part of the Duchy of Burgundy. The last Duke of Burgundy was killed in the Battle of Nancy in 1477: “Is this indeed the cadaver of Charles the Rash? If so, I am Joan of Arc”.

Professor Hatton-Jones avers “But with the aid of this most exciting document, I am now able to change the course of history”. So the bedrock of Passport to Pimlico is, in miniature, that history is not what it seems. Admittedly, it isn’t making its case on an elaborate scale – such as “Tartaria” being scrubbed from the maps and history books, or global history itself being largely fabricated (at least, prior to 1700 or thereabouts) – but the idea that the past must fall in line, be subsumed beneath the prevailing system, is key to the picture’s conflict.

One might suggest, were any such incident to occur in the real world, that it would be duly quashed without any pretence to legal scruples. Screenwriter TEB Clarke’s idea sprang from the temporary declaration of the Ottawa Civic Hospital maternity ward as Dutch territory, in order that Princess Juliana of the Netherlands’ baby could be born on national soil; for a closer parallel, the 1977 replica Frestonia was largely fated in similar manner to Passport to Pimlico.

In the case of Frestonia, the attempt by Freston Road, London residents, largely squatters, to seceded from the UK and form the Free and Independent Republic of Frestonia – including David Rappaport as Foreign Minister – eventually devolved into a housing co-op (instantly renouncing serious independent intent was their proposal to join the EEC). The Clash recorded Combat Rock in Frestonia (it was also the title of the final Aztec Camera album).

The result essentially vouches safe that most micronations are destined to be written off as eccentric foibles, the subject of hearty chuckles, and that, however serious the intent of at least some of those proclaiming sovereignty, they’re at best a brief distraction and “evidence” that it’s quite impossible to survive without the beneficent oversight of a true, thoroughbred nanny state.

There’s particular cachet of this kind in Passport to Pimlico, after Arthur Pemberton (Stanley Holloway, mercifully not singing on this occasion: see the later My Fair Lady for why) falls down a hole and discovers the Burgundy stash. The rejection of government policies, of ID documents and restrictions on their freedoms (“Ration books? This is Burgundy!”), leads to an influx of black marketeers: “Can’t have this place turning into a spiv’s paradise”. Which, while a warning of what happens if you go your own way – lawlessness! – is also a pretty shrewd take on likely transpiring events. Eventually, barbed wire goes up and the utilities are cut off (leading to night-time raids on the nearest hydrant). Feeding the starving Burgundians is overtly compared to animals at the zoo (“Oh, go on, dad. Let me feed ’em too”), and Whitehall’s response – as personified by Basil Radford and Naunton Wayne, Gregg and Straker, but essentially Charters and Caldicott – is expressly not based on concerns for the population’s welfare, but rather the fallout of adverse public opinion.

There’s much larky observational humour in Henry Cornelius’ film (according to debuting Barbara Murray – much later of Doctor Who’s Black Orchid – Cornelius was far from larky and something of a bully, so she enjoyed seeing him frequently forced to butt heads with Ealing chief Michael Balcon). The bank manager (Raymond Huntley) receives reprimands from his superior – “Head office doesn’t consider you the next Montagu Norman yet“, referencing the Governor of the Bank of England from 1920 to 1944 – but is later compared approvingly to Norman, particularly when he arrives at a happy solution to negotiations (the Burgundy loot will be loaned to Britain). The local PC (Philip Stainton) arrives at the pub, intent on closing it, only to drink up when he realises there are no longer any opening hours. Feeling the screws tighten, Burgundians request those passing through their territory by tram present travel documents. A duel of tannoys takes place as the Burgundians issue their own edicts in response to Britain’s (“We’re sick and tired of your voice in this country. Now, shut up!”)

Marbling the proceedings is a stultifying heatwave (a reason cited for the picture going over schedule and over budget was inclement weather conditions, also Cornelius’ inexperience). It gives an excuse for Murray to wear a swimsuit (“You didn’t go to the door like that”), but also ups the sense of an urban pressure cooker; a decade later, The Day the Earth Caught Fire would employ the device for another sweltering capital, to more apocalyptic ends. Naturally as soon as their “temporary absence from the Kingdom” is curtailed, the heavens open.

The cast are great, from earthy Holloway – first choice was Jack Warner – to delectable Murray. Rutherford came on board instead of first choice Alistair Sim and spoke glowingly of the picture accentuating its characters’ “individuality and decency, while acknowledging some parochial idiosyncrasies”. Charles Hawtrey, by then in his mid-thirties so no longer quite playing school boys, gets to show off his piano playing. Canadian actor Paul Dupuis plays the heir and current Duke of Burgundy; perhaps surprisingly, he doesn’t turn out to be an impostor.

Time Out’s Tom Milne called Passport to Pimlico “A brilliant idea whose satirical possibilities are never really explored”, while Pauline Kael credited it with “a fine flavour and wonderful details, though the whimsy is rather self-congratulatory”. That is, though, the Ealing spirit. This was never going to be as coruscating as a Boulting Brothers picture. It seems Mike Myers originally planned Wayne’s World 2 as a riff on Passport to Pimlico, but had to rewrite it hurriedly because Paramount didn’t own the rights (the latter option after he was royally chewed out by Sherry Lansing). Notably, Myers, creatively absent since The Love Guru was (overly) harshly received, has just returned to screens with his comedic Netflix riff on conspiracy lore in The Pentaverate.

For good reason – along with the better portion of Ealing Comedies – Passport to Pimlico is upheld as one of the great British Films. A 1999 BFI survey of the best of the century had it at 63, although, the fact that The Full Monty charted at 25 casts doubt as to its rigour. It was BAFTA-nominated for Best British film against other 1949 gems like The Third Man, Kind Hearts and Coronets, Whisky Galore! and The Queen of Spades, so it can’t really be too upset that it lost to the Carol Reed picture (Kind Hearts and Coronets should have won, though). It also received an Academy Award nomination for Best Story and Screenplay (equivalent to Best Original Screenplay) but lost to Battleground (say what?) The opening dedication – “In memory of”, with a picture of clothes rationing books – was added in desperation after the partial end of rationing caught the makers on the hop (it wouldn’t end completely for another five years).

There’s a moment in Passport to Pimlico where the British are urged not to exploit the prevailing currency leak; they’re to refrain from entering the Burgundy area or sterner measures will be required. Sterner measures are duly enforced. There could never be any doubt; anyone would think a plandemic was on! The best line, though – “And it’s just because we are English that we’re sticking up for our right to be Burgundians!” – suggests a truth that may be more salient than any truly devastating satire; most appear to favour uninquiring comfort and the state to do their thinking for them. With the consequence that status-quo control is eagerly anticipated, such that the established order is retrenched and duly prevails. 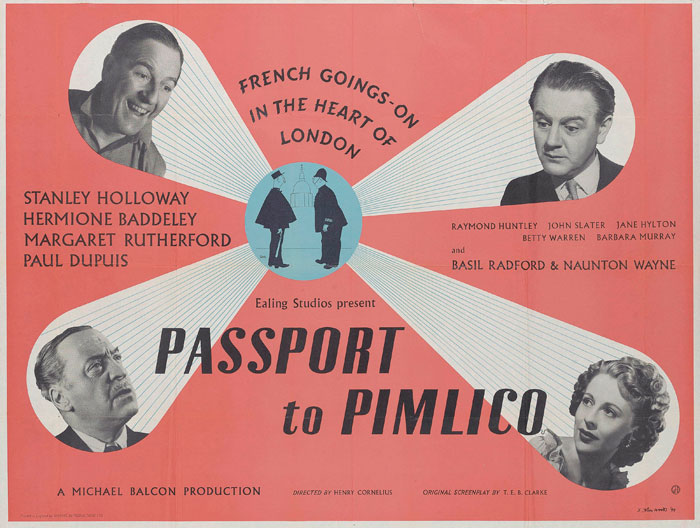