Basically, I take human garbage from around the world, and I reprocess it.

A problem for the futuristic prison movie subgenre is that its instigators can be a little slack when it comes to including an idea of how the encompassing future world operates. A corporatised prison system seems like a given (see also Wedlock, Fortress), probably because it already had roots when these movies came out (in the US, UK, France and Oz, at minimum). Beyond that, though, the unifying factor is an apparent lack of thought. No Escape, a mish-mash of established tropes, some utilised effectively by director Martin Campbell, some less so, exemplifies this.

Title: In the year 2022, the international prison system is operated by private corporations. Criminals from all over the world are exploited at a profit. Prisons have become a big business.

The opening title might be seen to suggest a one-world government for its “now”, or moves in that direction, since the prison system knows no borders. We never hear anything to confirm or deny, but it’s implicit that, despite the reach of corporations, they aren’t calling the ultimate shots (it doesn’t appear this is a functional Guantanamo, and there’s no Tom Hanks, or his mortal remains, in sight). Rather endearingly, No Escape is one of those “bad apples” movies Hollywood prefers, where order can be “restored”, if only our heroes alert the public and/or the essentially decent authorities. While this kind of scenario is understandable when it comes to contemporary fare (Enemy of the State, say, which was explicitly changed in order to suggest a few bad eggs operating the surveillance state) it’s discouraging when SF, not so much a genre to bottle it when it comes to dystopian fantasies, should opt for a similar course. Unless, that is, the dystopian horrors of the actual 2022 also conceal a silver lining…

Warden: I run a multinational business here, Mr Robbins. Basically, I take human garbage from around the world, and I reprocess it.

So our hero John Robbins (Ray Liotta) is sentenced to Leviticus Level 6 Maximum Security Prison, having previously escaped two different Level 5 prisons. He’s given the standard lecture by Michael Lerner’s’ de rigueur nightmare warden (“Society has no further use for you… death is the only way out… no chance of reprieve, no possibility of escape, you are condemned”). Leviticus is a bleak, hermetically-sealed facility, but through failing to do as the warden instructs (kill a fellow prisoner), John is sentenced to… the fresh air, clean water and teeming flora of Absolom island, 200 miles off the mainland!

Sure, it’s under constant surveillance, via high-resolution optics, infra-red scans and a fleet of gunships fifty miles out, but it beats a lightless cell, right? Is this the future of a progressive prison system? Well, if you’re able to fall in with the Insiders, led by the Father (Lance Henriksen), yes. If not, and you’re one of the Outsiders, under the rule of Marek (Stuart Wilson), you’re shit out of luck. And will, quite possibly, also end up as lunch. They not only look like Mad Max rejects by way of Lord of the Flies meets Apocalypse Now, they practice cannibalism when they aren’t eating rats. They also outnumber the Insiders and their fragile, civilised village and bespoke knitwear by 600 to 98.

Michael Gaylin and Joel Gross’s screenplay is loosely based on Richard Herley’s 1987 novel The Penal Colony (set on an island off the Cornish coast – this was filmed in Queensland). Not much of a title, but still better than the utterly redundant No Escape (if you want a flop movie, a good start is giving it a title that actively encourages public disinterest; French title Absolom 2022 is a tad better). I don’t know how that the novel turned out, but it surely has to be more satisfying than this. Did Gale Anne Hurd – who previously worked with Campbell on HBO Lovecraftian detective noir Cast a Deadly Spell – and co decide to graft some positive developments onto its dystopian jungle?

About two-thirds of the way through, we’re told the prison authorities keep Absolom classified, as the public wouldn’t allow it if truth leaked out. What part wouldn’t they allow, exactly? Were this the actual 2022, Absolom would surely be linked up to a livestream, far from provoking public outrage, except perhaps from celebrities wondering why they can’t get into there. But no, Robbins, who failed to spread the truth (not least regarding the background to his incarceration) upon escaping several earlier facilities, is going to set the world to rights this time.

Robbins: We were losing the war. The brass needed a big body count. Even after I killed the old man, no one would listen to me.

Other elements are also left hanging. Rather than simply reading his file, the Warden has a DNA scan performed on Robbins. This reveals “near pathological aversion to authority and a temperament prone to violent behaviour”; it’s comforting to know one’s DNA contains such profound insights. We also learn Robbins’ history; one of the most effective parts of the movie is actually the opening credits, showing a parade ground in long shot silhouette. The attention is only broken at the end of the credits, as a figure breaks with the parade and shoots his CO in the head. This was Robbins, a Special Forces marine who was court-martialled in 2011. We learn his act was a reprisal for being ordered into a situation where he and his men killed 342 women and children on the pretext of bioweapons (hmmm, mass murder committed in the Middle East on the basis of a lie about WMDs?) Curiously, this conflict took place in Benghazi; the actual 2011 saw Gaddafi ousted as part of the CIA’s Arab Spring operation.

No Escape landed at a time when Hollywood was still flirting with the possibility Liotta might establish himself as leading man – like Alec Baldwin, they concluded, somewhere around ’96, that this was simply a non-starter. Still, he’s well cast as a no-nonsense killing machine, only annoying slightly when he overdoes “pain” acting. He’s certainly more than capable of carrying a big movie; the problem with No Escape is that, while Campbell directs it more than serviceably – even if many of the miniature model shots have all the conviction of miniature model shots – it has a hankering to be more respectable than its essentially pulpy basic allow (witness the over-earnest Graeme Revell score). So unlike Fortress, it over-extends itself to two hours, incorporating numerous, increasingly tiresome conversations about lone wolfism vs responsibility to the group.

Campbell has assembled a strong-enough cast, but they’re stuck with stock types. Good guy Father, preaching in a Jesus cassock, is boosted by Henriksen playing him, but he can only do so much. Wilson is kind of funny at times, particularly his initial reaction to Robbins dealing with his big challenger with a single knife blow, but Marek’s also rather silly, both in terms of costume, hair & makeup and impact; you don’t really believe he’s the threat he’s supposed to be. There’s solid additional support from the likes of Don Henderson, Ernie Hudson, Ian McNeice and Kevin Dillon.

Various mitigating clauses are offered the high-grade felons in the Insider camp. So Dillon’s Casey, involved in the Weinberger kidnapping, was just the gopher. Dysart (Jack Shepherd) wants to stay on the island out of guilt for making a deadly bomb. And Father, whom everyone believes is untouchable (“I think he’s the only innocent man here”) is seriously contrite (“My wife’s death was no suicide”). Henderson makes booze, so he’s alright.

McNeice’s King, meanwhile, propounds the “virtues” of allopathic medicine; you’d have thought this would be a chance to break ranks with Rockefeller religion. Although, he does turn out to be a bad egg; the spy in their midst, so perhaps the two are related. Of which, you wouldn’t have the only gay character – unless we include Casey crushing on Robbins – revealed as a no-good stinker in an actual 2022 movie.

When it comes to the action, No Escape delivers; the early passage, of Robbins navigating Outsiders territory before he escapes to the Insiders, is taut and gripping. Unfortunately, there’s too much fat elsewhere. Campbell would later note that, while the film made no money, it led to United Artists’ John Calley calling him (“… he said, ‘Do you want direct Bond?’ I said, ‘Why did you choose me?’ And he said, ‘Well, I saw No Escape and I think you’d be good for it’—probably because I was cheap”).

No Escape includes a Christmas scene, one of those bad Christmas movie moments, as it heralds the attack on the Outsider compound and Marek singing carols. It’s extraordinary just how much flotsam and jetsam from industrialised society has washed up on the island that the Insiders are able to put to use. Added to which, I’m assuming that, whatever else is withheld from them in supply drops, the Insiders are still allowed provisions of wool, fabric and knitting needles.

Hawkins: Robbins, do you believe there’s a God out there, looking out for us?
Robbins: There’s somebody out there. It sure as hell isn’t God.

The conversation about God is notable; Robbins gives a typical Hollywood tough guy disavowal, and Campbell and editor Terry Rawlings promptly cut to who IS out there, a satellite orbiting globe Earth, reinforcing the idea that we are being watched just the way they want you to think we are being watched (see Enemy of the State for further fuel to that fire). Campbell said of No Escape “it really served its purpose” on the grounds it got him Goldeneye, which is fair enough, but it would have been better served had it been trimmed by half an hour. 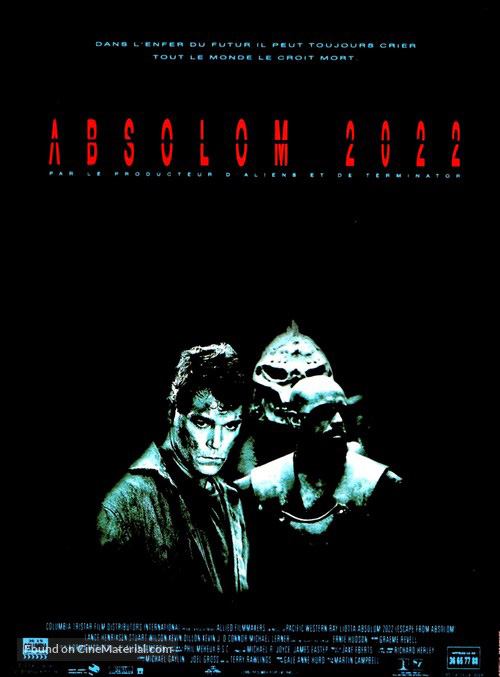 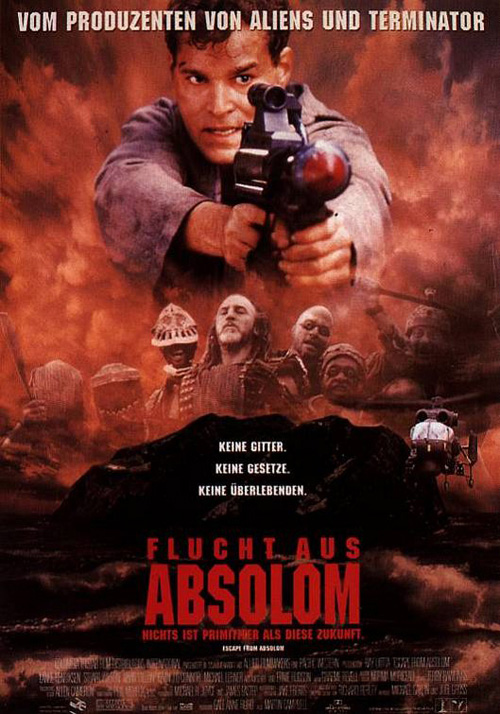