Always blame the USA! Even if you’re wrong!

It’s easy to see why Z received the attention it did, including a rare Best Picture nomination for a non-English language film. Quite apart from being a compelling if rather dry conspiracy thriller, its fictionalised events preceded the then-current military junta in Greece, and if there’s one thing Hollywood can be relied on for – providing of course they have retired to a safe distance, brave Sean Penn aside – it’s sticking it to the fascists.

Ultimately, Z is framed against one great Hegelian conflagration of left vs right and military juntas vs democracy; when all is said and done, the state remains consolidated and affirmed, and the main players have blown away in the wind. The trick is not to be enmired in the polarities, especially difficult when it comes to the extremity of this situation.

In the minutiae of events, however, Z is frequently gripping, stirring and inspiring of outrage at machinations unfolding unchecked and even rewarded; the closing narration(s) affirm that those instrumental in bringing indictments in the murder of Yves Montand’s pacifist deputy – based on Grigoris Lambrakis – received minor sentences at worst, eventually ending up in positions of greater power, while those who opposed the same were murdered or imprisoned themselves. In contrast to the movie’s downbeat coda, the actual narrative offered initial hope, whereby the right-wing PM resigned, and the opposition were elected; this then fell apart in 1965, with a constitutional crisis triggered by the king getting rid of the PM. The king then appointed an interim government, with a military coup doing for any chance of democrats getting back in at the 1967 elections.

Z’s verité documentary style inspired many, including William Friedkin on The French Connection, Steven Soderbergh on Traffic and Oliver Stone (Paul Greengrass loves it too, but the less said about his status as a propaganda merchant for hire, the better). Indeed, Pauline Kael, who called Z “almost intolerably exciting”, nursed qualms about the Gavras approach, pondering the use of the same techniques by a “smart Fascist filmmaker… against the left of centre”. Thus, when The French Connection came along, it wasn’t so much ideology that proved a sticking point as techniques she considered were “used as ends in themselves” (rather than, say, to show how you a Fascist conspiracy works): “The purpose of the brutality in Z was moral… Here you love it, you wait for it – that’s all there is”.

It’s fair to say, then, that the impact of Costa-Gavras’ film was as much down to stylistic reasons as its rousing subject matter; you can see how innovative he was by comparing Z to Hitchcock’s attempts at realism, also in a political thriller based on actual events, in the same year’s Topaz. The rare moments in Topaz that work tend to be ones where Hitch’s stylistic excesses are to the fore. Kael wondered “Is it valid, morally, to turn actual political drama… into political melodrama, like Z?” What she was surely actually asking was whether it’s okay to do so without a respectful distance from the subject matter; she wouldn’t have batted an eyelid, had the film been based on events set fifty years earlier, or two hundred. As such, I’d suggest the issue is less one of morality than insufficient perspective.

Gavras follows the events leading to the assassination, as issues over the location of a nuclear disarmament rally – more Hegelian conflicts – escalate when police-employed goons attack leafleteers; the deputy is then fatally beaten by Vago (Marcel Bozzuffi). For me, Z only shits into truly gripping gear with subsequent investigation by Jean-Louis Trintignant’s stalwart prosecutor, in the face of veiled threats and attempts to kibosh his witnesses.

As Kael recognised, there are broad strokes here, beneath the realist “sheen”, such that “on the one hand, there are the weak and corrupt and degenerate, the bullies and criminals… the Fascists. On the other, there are the gentle, intelligent, honourable pacifists… humanitarians”. But the stylistic immediacy of the picture does much to paper over such concerns, and also ensures its frequent quirks are less egregious.

Indeed, Gavras has a sure eye on absurdity from the off, with a police speech comparing mildew prevention to the treatment of leftist leanings, bemoaning the outbreak of isms… and correlating to them with solar activity: “sunspots start to multiply on the face of the golden orb”. The military testimony is laced with hypocritical irony – “As if it’s not enough our country has been invaded by long-haired atheists and addicts. Now you want to cast doubt on our armed forces, the sole healthy elements in our country” – and the General’s (Pierre Dux) excuse for attending the Bolshoi ballet on the night of the assassination is particularly funny (“Not for love of the dance. I’m not one of those perverts. It was a chance to spot some Reds”).

Also amusing is Georges Geret’s witness, boshed on the head but undissuaded in his determination to give evidence. Funnier still is Bozzuffi’s gay paedophile assassin (as far as the movie is concerned, he appears to be both) Which he oughtn’t to be, obviously, but it’s a very amusing performance, mostly because it’s so utterly unapologetic (especially when the assassin is coming over inept, such as his plaster cast disguise). Asked about his rape conviction, he replies it wasn’t really valid: “I was a counsellor at a boy scout camp”. Of his “broken” leg, he protests “It was a rich man’s fracture!” The BFI picked up on the generally iffy portrayal when discussing homosexuality as “evidence of… wickedness… Costa-Gavras’ Z… went one worse [than Rosa Klebb in From Russia with Love], featuring a gay pederast as an assassin”.

Z doesn’t delve deeply into the historical context of the country’s political strife, but per another of Gavras’ amusing lines, one should “Always blame the USA! Even if you’re wrong!” It’s implied there is CIA involvement behind the scenes, most especially due to the threat made to dismantle foreign military bases on Greek soil. US involvement extended – in this context anyway – back to 1947 and the Truman Doctrine, whereby they were keen to support authoritarian governments in like-minded jurisdictions in the face of possible Soviet influences; the US was thus instrumental in ensuring the communists’ defeat in the civil war (1949). And in respect of their response to a potential “extra-parliamentary” solution in the 1967 election suggested “It would depend”. Which is fairly de rigueur; democracy is a must, unless it’s against our best interests.

In Kael’s celebration of Z, she commented “There hasn’t been an exciting anti-fascists suspense film around for a long time”, but it left me wondering what, specifically, she was hearkening back to in that “sub-genre”. Notably, however, she had no truck with the logical extrapolation from Z’s situation. She was thus more than happy to dismiss the “conspiracy fantasies” about JFK’s assassination, and sceptical of writer Jorge Semprun’s assertion “it happens everywhere”. Sobering to recognise how immediately a writer fell on the tediously obligatory denial of the conspiracy option even back then: “One can easily recognise the psychological attraction, for both left and right, of spinning conspiratorial systems that make things grand and orderly”. One can also easily recognise the psychological attraction for denying them. Just ask Mr Blair.

Z was nominated for five Oscars (it was the second foreign-language picture, after Grand Illusion, to be nominated for Best Picture), missing out on Picture, Director and Adapted Screenplay (from Vsassilis Vassilikos’ 1966 novel) but winning Best Foreign Language Film and, Best Film Editing. I’m mostly familiar with Costa-Gavras’ subsequent English-language career, which was (I’m using the past tense as it appears to have been abandoned), by and large disappointing. His third film will remain is his most iconic, as is often the case, and in contrast to the crowned cowboy, would have been a very fitting winner; in the event, it would be another fifty years before a foreign-language film would take that prize. 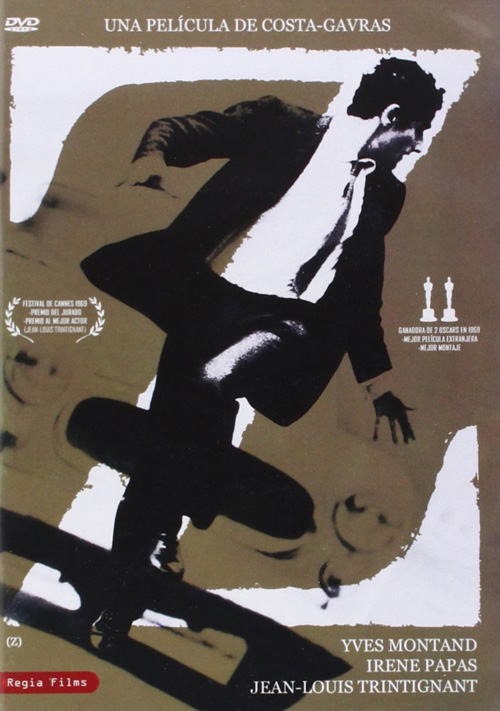