Bob Fosse’s directorial debut, and very far from any kind of classic. Sweet Charity does, however, offer a sequence that undeniably merits such status, and knocks 99 percent of choreographed numbers into a cocked hat. Unfortunately, it comes during the first thirty minutes, and there are still two more hours to go.

Indeed, the preceding Big Spender is no slouch either, and obviously the song from the musical that has since gained legendary status; a prospective client surveys a line-up of taxi-dancers for his delectation. Fosse opens the movie in crash-zoom overdrive, like he’s getting giddy with the camera’s possibilities (which, unless you’re Ken Brannagh, Stephen Sommers or Chris Carter, is arguably better than doing nothing with it). But when he settles into numbers employing expert choreography and precision timing, the combination of camera, performer and editing are invariably a wonder to behold, as evidenced in nightclub sequence The Rich Man’s Frug. Comprising The Aloof/The Heavyweight/The Big Finish, this is surely one of the greatest musical sequences ever (and later copied by Mike Myers in Austin Powers – I was going to say spoofed, but homaged would be better).

Based on Neil Simon’s 1966 stage musical, also served up by Fosse, and in turn inspired by Fellini’s Nights of Cabiria (about a hooker, rather than this picture’s private, well, taxi-dancer), Sweet Charity follows the unhappy love affairs of Shirley MacLaine’s Charity. Having been thrown in a Central Park lake by her boyfriend (who makes off with her savings), she captures the attentions of movie star Vittori Vitale (Ricard Montalbán, great). He has just split with girlfriend Ursula; Vittorio and Ursula soon end up together again, however, due to Charity being overly, er, sweet. But all is not lost; she meets Oscar Lindquist (John McMartin) after leaving an inopportune appointment with an employment agency. Alas, Oscar’s proposal is, in due course, scuppered. He’s unable to see past the number of men she’s been with (the line between taxi dancer and hooker evidently being a sketchy one).

The problem with Sweet Charity’s structure is that, once Vitale is out of the picture, the proceedings are mildly diverting at best, something of a chore at worst. Charity and Oscar are stuck in a lift. There’s a decent cameo number from ever-popular, self-professed Satanist Sammy Davis Jr as – of all things – a preacher named Big Daddy; he’s holding forth at the Rhythm of Life Tabernacle (number seven of the top ten religions, doubtless pushing the Process Church aside). It’s so obviously filler, though, a digression designed to distract attention from the big empty nothing of the main action, that in some ways it’s a mistake. And, after all that, having Charity left on her own is a massive downer.

Fosse, expecting a clash with studio, also filmed a “too corny” happy ending (where Charity and Oscar end up together after all). To his surprise, Universal didn’t pressure him to use it. Really, though, this isn’t West Side Story. There’s nothing crucial that requires Charity to finish up in a place of bittersweet resignation. There’s barely a plot to hang anything on in the entire two-and-a-half hours, let alone a running theme. Still, I’m informed Sweet Charity’s very popular… on the stage.

I see MacLaine was compared disparagingly with Gwen Verdon’s “eccentric line” in that production, and I can quite appreciate how a different, more embracing and self-conscious flair from the lead could have worked… perhaps not wonders – the story would still be flaccid – but make it more appealing. There’s one great MacLaine moment preceding the standout number (the aforementioned The Aloof/The Heavyweight/The Big Finish), where the attendees are all asking in turn “Who is it?”, in reference to Ricardo’s date, and she responds to the inquisitive camera with “It’s just me!” That would have been exactly the gusto to give the character throughout, throwing off the continued chasteners lobbed her way.

Verdon was nearly a decade older than MacLaine – and not a movie star, crucially – so I’m not necessarily suggesting the movie needed a younger player; I would say it certainly needed a younger MacLaine, however. This is the point where she’s no longer so fresh and inspiring, despite being a mere wisp of 35; crucially, she’s in the transitionary state from her likeable younger self to jaded older harridan (I wouldn’t go as far as Don Siegel in the following year’s Two Mules for Sister Sara, but I can see his point when he complained “She’s too unfeminine and has too much balls”). No shortage of Atlantean crystal ones, though.

Indeed, fellow dancer Paula Kelly (The Andromeda Strain, Soylent Green) makes for a much more appealing potential lead as Shirley. Also in the cast is Bud Cort as one of the hippies whose “peace” vibe saves Charity from suicidal thoughts (something that dated the movie even before its release).

Pauline Kael commented “It’s a disaster”, but she dug Fosse’s choreography and dancing. Time Out’s Tom Milne reappraised it as “No masterpiece but a generally underrated musical all the same” and called MacLaine “splendidly funny”. So again, your mileage may vary based on how appealing you find her. Sweet Charity could be added to the log jam of musical flops over the last few years of the ’60s, ones that resoundingly cancelled the lavish enthusiasm for the genre following the triptych of The Sound of Music, Mary Poppins and My Fair Lady. There’d be significantly fewer during the subsequent decade, but two of them would notably come from Fosse, learning from his novice errors here. 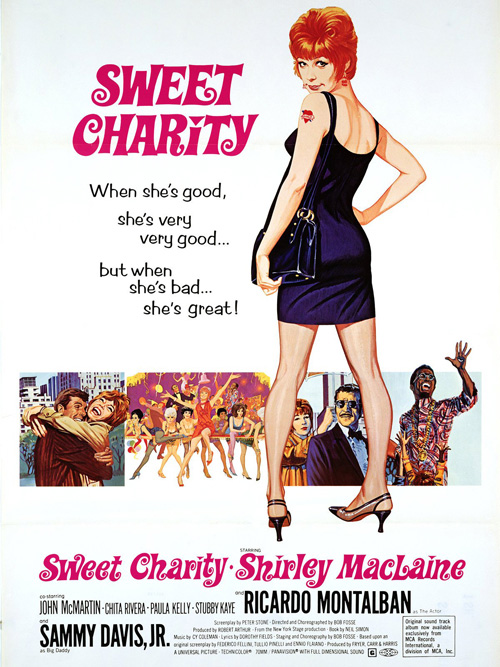