99.386 percent of the population wouldn’t believe this conversation, and the rest are working for us.

I’m late to the party for this one – 54 years, to be precise – as it’s had something of a rediscovery, riding on the crest of the plandemic wave. The News-Benders’ insights into the manufacture – the penning of the preordained script – of the news are all there in its densely packed 28 minutes.The only question arising would be whether it represents a quite shockingly blatant disclosure of method – as many understandably assume, given how accurately it reflects the current state of the conspirasphere – or simply trenchant satire. Such is the nature of these things, I’d suggest either is plausible; I certainly don’t think anything in it – even though it would, admittedly, make its creator(s) remarkably insightful – is beyond the realm of a keen and incisive writer, particularly since its cues are very visibly taken from Orwell. Or that, in terms of its innocuous mode of presentation, the BBC would necessarily think twice at letting it out there.

JG: We only plan in detail for the year ahead.

I’m suggesting such a possibility more as a corollary to, for example, the Clues Forum discussion, whereby it’s assumed The News-Benders couldn’t possibly be anything else, than intent to come down on one side or the other; for what it’s worth, it’s repeatedly and consistently so sharp and incisive in its points, one would expect anyone responsible destined for authorial greatness, all things being equal. In contrast to Desmond Lowden, who hasn’t really. Which makes it eminently reasonable to class him as a made-up person à la JK Rowling or Chris Carter. Lowden’s career doesn’t particularly suggest anomalous credits, any more than any other jobbing writer/author. But yes, of course the content could have been suggested to him, and he could have been used as a surrogate or otherwise instigated (like Rowling and Carter, I’m assuming there is a nominal Lowden out there, as he’s apparently interviewed on the Bellman and True Blu-ray).

On that satire front, seeing The News-Benders as extrapolating from Orwell’s 1984 (with a more zeitgeist-y spin), it’s notable that Donald Pleasance (JG) had appeared in both the 1954 BBC 1984 – like this, Rudolph Cartier-directed; 1984 was Nigel Kneale-scripted, Cartier now being best known for helming Kneale’s ’50s tremendously influential Quatermass productions – and the 1956 Hollywood production.

Debates about authenticity aside, what of the content? Robert Larkin (Nigel Davenport, readily familiar from such genre fare as No Blade of Grass and Phase IV) is summoned by JG, wo gives him less a career proposition than a demand. Larkin achieved some renown making hard-hitting documentaries half a decade before, but he has since gravitated into the equivalent of “soufflés” and the arms of the establishment, forsaking his socialist credentials in recognition of a country that will never allow real socialism. He seems aware of JG’s office – CWNS, Classified World News Service – which sits midway between the government and television companies; certain subjects with security classification (ones covering wars, weapons, political leaks and the like) – including, presumably, this Thirty-Minute Theatre – require the office’s approval in order to be released.

JG: We want people with low power quotients. We want them to work for us.

Larkin appeals to CWNS because he exhibits the appropriate “ratio of responsibility as against aggression”; his necessary usefulness (low power) quotient makes him ripe to join “the power elite”. CWNS, he is told, plans the news, years in advance, and consists of “a very few of the top people in communications in every major country in the world” (including China? See below): a “sixth of the world controlled from this building”. JG isn’t at the very top, however; there are two offices above him and a giant computer system. JG insists this is just a machine, into which data is fed and from which the resultant decisions are relayed, but the scenario is effectively one of an AI-controlled edifice (this would be rather like the Telephone Company in The President’s Analyst).

JG: Near the top of the hierarchy there are the top economists, top civil servants, the top brass in the military, those men who are supposed to view the nuclear tests and so on, and above them, CWNS.
Larkin: Right at the top.

Larkin is told the incentives in cooperating are twofold; “They know they are guaranteeing the lives of their grandchildren” through manufacturing false threats that maintain the delicate balance of world affairs via super-power complicity. Should the appeal to principles fail to persuade them – per Larkin – there is a more rudimentary method: the small matter of a surgical transmitter implanted upon his person during a routine surgery, one with an explosive component (“You start on Monday”).

Of course, there’s no actual proof a transmitter was implanted; given CWNS’s resources, the conversation with his then girlfriend – blackmail being fundamental leverage in ensuring obedience; Larkin is married with a family – could simply have been recorded through standard surveillance, with sound effects added after the fact. Neither is there any evidence of an all-powerful AI upstairs: “It’s Doctor Who”. Which would be rather the point of the exercise (in the same regard, The News-Benders was evidently no isolated BBC incident in the conversation of accepted paradigms, as Patrick Moore’s conversation with a Flat-Earther, and his appeal to individual thought, illustrates). When JG asks rhetorically “How many have actually seen a missile or a satellite? They’re just told they exist”, he sums up our endless capacity for learning by rote and believing exactly what we are told about the world.

Larkin: I just want to make sure the sunlight’s real.

News, JG tells Larkin, is “the most highly developed form of fiction”. To prove his point, JG informs him “We’ve already roughed out the news for 1973” and offers some evidence. This includes a joint US/Russian Moon landing (grainy model footage shot in a studio is shown on a low-resolution TV); it will be decreed of “no strategic value… a comforting note for us stay-at-homes” and “a comforting note for us to stay at home”. Obviously, in reality, this would be brought forward by four years, with just a US landing on the Moon (for which grainy model footage shot in a studio was shown on a low-resolution TV).

Space rockets are a fiction: “They have a fireworks party at Cape Kennedy almost every other day”. To underline the point, JG asks if Larkin really believes they send astronauts up there on trips “crossing their legs for eight days”. It’s an exercise in credulity. Also on the itinerary are “the ultimate weapon” Codename Icarus, a satellite-mounted weapons platform (anticipating Reagan’s Star Wars defence system) and an ICBM nicknamed Boy Wonder, both designed to instil appropriate concern and fear of their application.

JG: For the past ten years, people have been looking at our fake newsreels, and listening to our fake commentaries.
Larkin: And they accept it for the truth? And you can do it.

A new phase of global warfare is in the pipeline too, in the form of a China-India conflict via the detonation of two five-megaton hydrogen bombs. These will not actually be detonated, because there are no hydrogen bombs. It will be easy to get away with the psyop, as it will take place in a very remote village on the Indochinese border, one with extremely mountainous terrain; there will be no survivors and no rescue work, as the radiation scare will keep people away. That’s subsequent decades’ terrorism handbook right there.

The context as presented is of manipulation post-Hiroshima (so for the purposes of this play, those nukes were real, whereas the hydrogen bomb didn’t work). There is due cooperation from Russia (“Nowadays, we like to work very closely together”); stories about spies going off to Russia (Kim Philby) are “Just good copy for the Sunday papers”. As for the Chinese? “We recorded their phony explosions” and are really hoping they come along to “complete the pattern”. Nobody, aside from the few who do, is in a position to know the weapons don’t really work, and nobody presses the button because “We control all the crises” (contextually, it’s unclear why, if the atomic bomb isn’t real, another nation couldn’t develop it and use it as a threat – the idea that the H-bomb is much bigger and so a disincentive is only relatively off-putting – but we’ll let that go for now).

Larkin: You mean you scare us so that we’ll buy more, so that so that money moves., quicker production moves up?

Vietnam is no real concern, merely a localised conflict; there is no danger of world war. As for communism or capitalism, “Strawberry or vanilla”, these are no more than Hegelian distinctions. The why is that there must be some kind of control, and thus an imprimatur to ‘keep the empty bellies under control”, since one quarter of the world is starving: “One of them is this fictitious hydrogen bomb we’ve talked about, and the other one is money”. And for the wealthy West, fear also makes for a capitalist incentive, with an additional spur here and there to put the populace on edge (“Overcrowd them a little with bad planning, sell them too many motorcars, anything to keep them a little bit removed from reality”).

Further to this characterisation of “reality”, JG informs Larkin “Nowadays people don’t work for money. They work for the idea of money… They love for the Idea of love. They only hate for the idea of hate” (this doesn’t sound so very far from the Debordian Spectacle). JG obligingly throws in a few additional pointers to the engineering of modern society. Although, rather than suggesting the entire youth movement was Tavistock induced, he singles out the proliferation of LSD (“Some of these protest movements were getting a little bit too close to the mark”).

JG: You really didn’t believe there were all these things whizzing about up there, did you? Sputniks and rockets? Astronauts crossing their legs for eight days.

We later saw an inkling of such advance coordination in The X-Files’ Musings of a Cigarette Smoking Man, where such events as the Oscars are decided upon, while The Simpsons appears to be a veritable Bible Code for any given event of the past three decades, but it’s The News-Benders’ extrapolated canvas that really impresses. Sure, there are all the things it doesn’t cover/fails to address – not least who controls the controllers, and slightly fudging the degree of global co-ordination, along with the disingenuous claim that, historically, “there wasn’t the right sort of control then” – but the impressing upon us of an artificial lens, through which we have no option but to view the world, speaks volumes. 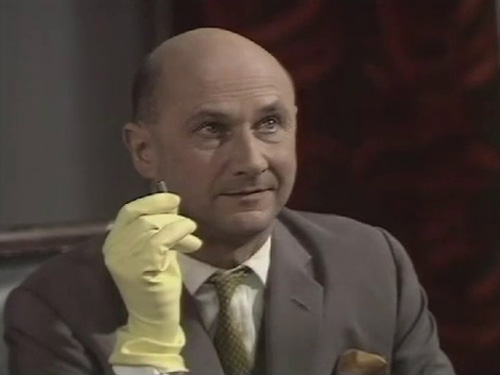 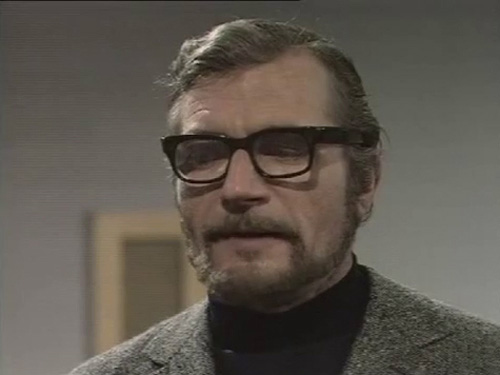