You have a very angry family, sir.

It would be overstating the case to suggest Eternals is a pleasant surprise, but given the adverse harbingers surrounding it, it’s a more serviceable – if bloated – and thematically intriguing picture than I’d expected. The signature motifs of director and honestly-not-billionaire’s-progeny Chloé Zhao are present, mostly amounting to attempts at Malick-lite gauzy natural light and naturalism at odds with the rigidly unnatural material. There’s woke to spare too, since this is something of a Kevin Feige Phase Four flagship, one that rather floundered, showcasing his designs for a nu-MCU. Nevertheless, Eternals manages to sustain interest despite some very variable performances, effects, and the usual retreat into standard tropes, come the final big showdown.

Which makes it more successful than the lethargic Black Widow and Shang-Chi and the Legend of the Ten Rings. None of this trio have set the world on fire, though, something Spider-Man: No Way Home has proved ispossible, even under plandemic conditions, just as long as you build it in the first place. Which rather goes to highlight there’s something seriously awry with these pictures’ foundations (there was only about $50m between them globally, with numbers approximating about half the expected MCU take for a modestly performing example of their fare).

Curiously, critics, normally a shoe-in for wokeness and giving the MCU a free pass, lined up to eviscerate Eternals. Perhaps it was just flying its flags too lazily, or the clash of Zhao’s sensibility – not, honestly, that intrusive, since all MCU is, to a greater or lesser extent, process-driven – or the indistinctive and paper-thin characters. But then, many and various issues, some of them equally prevailing, haven’t dampened the raves previously. Eternals might just have been seen as suffering an embarrassment of issues.

Certainly, it represents a break with the MCU’s standard approach. Introducing an entire superhero line-up, not as an origin tale, and in so doing attempting to establish fully-formed characters and backstory, along with threats and integration into the greater MCU, represented no small task. There was much – entirely valid – speculation over how a gang of godlike protectors of Earth could be lurking unannounced amid the machinations of Thanos et al. Eternals doesn’t brush that concern off, but the explanation isn’t entirely persuasive. We’re told “We were instructed not to interfere in any human conflicts unless Deviants were involved”, but you’d have thought an acute threat to Arishem’s “propagation” plan such as the Snap might have triggered an exception to the rule.

There are nine Eternals, painstakingly recalibrated for the MCU on representational lines, yet for the most part failing to pass the litmus test of making any lasting impression on the viewer. Kumail Nanjiani fares best as Kingo, a self-infatuated Bollywood star arriving armed with his own comedy valet Karun (a scene-stealing Harish Patel). There’s even a vague air of Bruce Campbell-esque preening in Kingo’s self-regard. I was previously less than whelmed by Nanjiani’s autobiographical The Big Sick, and his multi-pack posing pre-Eternals’ release didn’t bode well, but he manages to stand out from the crowd here, owing to a combination of winning interplay and ready rejoinders.

Gemma Chan is the ostensible lead, but a rather indifferent Sersi (never a great harbinger when empathy is a special skill, as Galaxy Quest identified so effectively). Angela Jolie is lifelessly posed as warrior Thena; she counts as the cast’s biggest star, but she brings nothing someone else, considerably cheaper, couldn’t have serviced (even the Mahd Wy’ry crazy stuff barely musters involvement in the character). Don Lee (Train to Busan) is in the deadpan muscleman (well, okay, let’s charitably call him beefy) mode of Dave Bautista in Guardians of the Galaxy, and he gets a few yucks with his spit-flavoured beer. However, you won’t be shedding a tear when he buys the farm. Salma Hayek buys hers early on as initial leader Ajak, and is similarly shrug worthy.

Bryan Tyree Henry’s superpower is being beefy (or we could uncharitably call him a tad tubby), gay and having a Muslim husband (that last one’s almost daring, I’ll admit). None of which is a substitute for being an interesting, engaging character, yet earns Marvel those all-important woke brownie points, complete with onscreen kiss. Because that’s what counts.

On a similar scale, Lauren Ridloff is deaf Eternal Makkari, and while I’m entirely unclear quite why Arishem would have designed one with impaired faculties, the answer might be in the same territory as asking why he summoned up several chunky ones (in the comics, she’s a he and can hear real good). Makkari’s a blank but speedy slate (were this Mystery Men, her superskill might well have been lipreading), but Ridloff’s appealing.

So much so, she almost makes inherently malevolent Barry Keoghan – as Druig – seem halfway agreeable by dint of their flirtation (obviously, Keoghan’s been cast as a less-than-sunshine-and-moonbeams type, although he stops short of his usual devil-troll typecasting). There’s also Lia McHugh as Sprite, an adult Eternal in a child’s body (so she’s what, there for Elite-appeal? The dialogue even overtly invokes JM Barrie, just so there are no doubts).

Which leaves… Oh yes, Richard Madden, who played the least interesting Stark in Game of Thrones. Here, he’s a not-terribly-interesting Superman type – who’s referenced, along with Batman – so it’s a relief when, about two thirds of the way through, Ikaris is revealed not to be a white saviour figure at all, but instead a much more acceptable toxic white male. Phew.

If such performative displays on Zhao and Feige’s parts seem like Eternals’ core focus, they may help explain why, any time we’re shown a superheroes-posing line up, the landing seems not a little naff. Such visualisation issues aren’t isolated either. I can’t really point a particular finger in terms of the third-act climax, as they tend to be the weak spot even in the better MCU entries, but the generic nature of the Deviants – a surprise they kept that name, given the negative connotations – as CGI beasts with flailing tentacles and the like, jar somewhat with Zhao’s inclination towards the naturalistic and tangible, be it in their appearance at Druig’s Amazon retreat or on a beach. But hey, Zhao’s Oscar-honoured intentions are where it’s all at. Why, there’s even an MCU-sanctioned sex scene!

Part of Eternals‘ problem is that, without a constant stream of ready quips – Kingo aside – there’s a need for a highly proficient filmmaker and/or story to suspend disbelief. Too much of Eternals falls into a trap of listless exposition, which is interesting in terms of the idea Disney is attempting to sell us, but in terms of propelling the story forward, keeps bringing the proceedings to a crashing to a halt. The twist with Ikaris arrives at a crucial point, which undoubtedly helps matters, but elsewhere the patented MCU world building – a typically wet Kit Harington as future Black Knight Dane Whitman; an only-if-you’re-a-fan appearance by Harry Styles as Eros/Starfox during the end credits – is unconvincing.

Where Eternals held my attention, though, is its overlaid cosmology. Some of the opening narration is later shown to be outright erroneous, so it’s quite feasible Arishem’s background will ultimately be revealed as incorrect. But as it stands, the MCU is presenting Arishem – personified as a rather robotic, AI-like entity – as a corrupt creator figure à la the gnostic demiurge. We are told “In the beginning… came the Celestials. Before the six singularities and the dawn of creation, Arishem created the first sun”. So this is our creator, most definitely not a well-intentioned deity, but one who created life, Deviants, Eternals as a means to promulgate its own species of Celestials (the concept of a creature growing from the “body” of the Earth is interesting, as some have proposed the Earth represents that kind of living entity).

Ikaris: If Celestials were gone, this universe would end. What you’re trying to do is free humanity from the natural order.

Early on, the picture emphasises Darwinism (“I know I’m late, Charlie”) and emphasises one of Hollywood’s very favourite buzz phrases for an all-consuming threat (“Today we will be learning about the importance of apex predators in a balanced ecosystem”). It would appear Zhao is nurturing a by-way-of-“science” creation myth. This idea of “farming the humans as food for the Celestials” found particular cinematic favour with the Wachowskis, first with the AI of The Matrix and then the elite ETs of Jupiter Ascending. The concept to be programmed is of a harsh, unforgiving realm, one in which there’s no hope unless we look to authority figures (human or otherwise) to save us. And if our heroes (the Eternals) are basically fancy robots, or approaching the same (Tony Stark), why shouldn’t we embrace transhumanism too (and through doing so ascend, becoming our own Luciferian gods)? It’s inevitable.

Arishem: I created the Deviants, Cersei, for the same reason I created you. Every Celestial host planet has its own predators. I first sent the Deviants to exterminate them, so intelligent life could grow.

Earth, we are told, is earmarked to “bring forth the Celestial Tiamut”. Every billion years, a new Celestial comes into being, seeds having been planted in host planets: “Tiamut needs vast amounts of energy for Celestial life”. Deviants “evolved, became predators themselves” such that Arishem built and programmed the Eternals, “synthetic beings incapable of evolution, to correct my mistake”. The Deviants were thus prevented from consuming humans by the Eternals, but neither pole represents an accurate picture of the “divine” plan (as Deviant Kro notes “Arishem used us and left us to die with each Emergence. We just wanted to survive… I will kill you all for what you have done to my kind”). Druig sardonically observes that “Eternals and Deviants are all Arishem’s children”.

Zhao crucially eliminates the fanciful idea of actual divinity (“There is no Olympia”, the planet from which the Olympian Eternals came; they derive instead “from the World Forge”). Humans are little more than cattle, such that once the population has increased to the required amount, Emergence will begin. This is stated in impassive, matter-of-fact terms (“The end of one life… is the beginning of another”), the detached, atheistic view of the philosophically stoical or the clinically scientific (“An infinite cycle of creation and destruction”).

Further still, Kingo’s comment “Turns out we’re the bad guys” fulfils a current Disney trope, or blurring such boundaries and inviting us identify and sympathise with those who would enslave us. You can see this in the Disney villain(ess) movies (Cruella, Maleficent) and even Star Wars (Boba Fett, an at-best grey hat, becoming the one figure even jaded fans can get behind). This feeds into other programming points, from globe Earth representations to the nuke threat, even to the absurdist justification (from wise, soulful gay Phastos) that “Conflict leads to war, and war actually leads to advancement and life-saving technology and medicine”.

If Eternals isn’t quite the stinker its reception would suggest, it’s also far from the Best Picture-worthy fare the early rumour mill was circulating. Doubtless Feige will attempt to redress the picture’s performance as a victory, but at this point, Spider-Man: No Way Home has made more than all three of the Disney-only Phase Four entries for 2021 combined, and it’s still growing its cume. And it will quite possibly earn itself that Oscar nomination. Notably, whatever Peter Parker’s foibles – and No Way Home does its best to make the MCU Peter a bit of a dipstick as a decision maker – he’s an unalloyed good guy, someone audiences genuinely want to get behind. We probably shouldn’t hold our breath for an Eternals sequel, but the Disney+ TV sphere means such considerations are no longer necessarily the tail wagging the dog. If nothing else, Zhao’s MCU excursion is superior to her deathly awards-darling Nomadland. 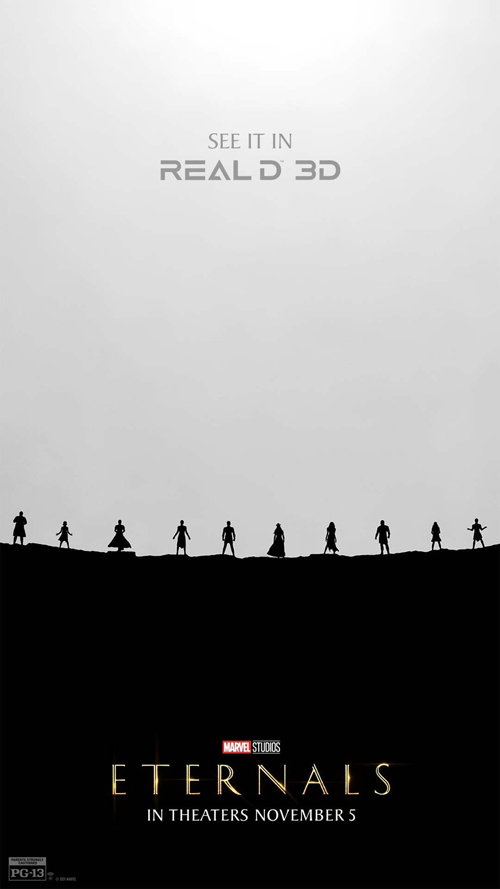