Out of my way, you lubberly oaf, or I’ll slit your gullet and shove it down your gizzard!

As I suggested when revisiting The Lemon Drop Kid, you’re unlikely to find many confessing to liking Bob Hope movies these days. Even Chevy Chase gets higher approval ratings. If asked to attest to the excruciating stand-up comedy guy Hope, the presenter and host, I doubt even diehards would proffer an endorsement. Probably even fewer would admit to having a hankering for Hope, were they aware of, or further still gave credence to, alleged MKUltra activities. But the movie comedy Hope, the fourth-wall breaking, Road-travelling quipster-coward of (loosely) 1939-1952? That Hope’s a funny guy, mostly, and many of his movies during that period are hugely inventive, creative comedies that are too easily dismissed under the “Bob Hope sucks” banner. The Princess and the Pirate is one of them.

That MKULtra guy, though: an alleged “Illuminati pimp” via USO touring. Yes, Hope was the Guantanamo Hanks of his era (or Jimmy Savile, albeit most considered him creepy enough at the time). Of course, were there unalloyed proof of Hope’s closet identity, it would be much less easy to separate “the art from the artist”.* The problem, as ever with this area, is that it’s a rabbit of hole of information, misinformation and disinformation, and unreserved credulity towards horrific confessions could, in some cases, be a carrot on a stick of the very agencies perpetrating them (Donald Marshall has admitted variable recall*, and we could go on, taking in Corey Goode or any similarly entangled whistle-blowers of the conspirasphere).

Perhaps the Hope coward persona was specifically designed to position him as essentially harmless. Or possibly it was an inverted admission of his true self. The unrepentant coward was a huge influence on Woody Allen’s early, funny movies, and it later became Bruce Campbell’s essential stock-in-trade, so there’s a significant mileage there, even if it’s generally untapped. One would be hard pressed to find any allusions to Bob’s secret life in his movies, unless you attempt a meta- reading of the metatextuality itself: that the consistent fourth-wall breaking is a reference to the layers of reality we abide by, the story we are told, and are inhabiting, and what is really going on is above that. Hope, as a ringmaster (at least, on his layer of operations) is well aware of that fakery, the superficiality his audience will buy into.

About the most you might credit on that theme here – and it’s a stretch – is Hope’s Sylvester Crosby awaking in a bed chamber at the residence of Governor La Roche (Walter Slezak), only to be told the handmaidens in attendance will attend to his every whim (“They’re real, and in Technicolor too!”)

Sylvester: Sit down and take a load off my eyes.

The screenplay was courtesy of Don Hartman, Melville Shavelson and Everett Freeman – all familiar names from other Hope or Danny Kaye movies – based on a story by Road to Zanzibar’s Sy Bartlett (Allen Boretz and Curtis Kenyon are given “written by”, for the adaptation, while Melvin Frank and Norman Panama did further, uncredited work).

The plot sees Sylvester escaping Captain Barrett aka The Hook (Victor McLaglen, every bit as subtle as is called for) after being pressed by pirate Featherhead (an infectiously laughing Walter Brennan, stealing every scene from Hope) to pass a treasure map to his cousin on the island of Casarouge. Sylvester takes off with Margaret (Virginia Mayo, comedians’ leading lady foil du jour generally around that time), on the run from her father and concealing her royal status.

Along the way, Sylvester must disguise himself as a gypsy and then as The Hook; Hope is no great shakes at playing anything other than himself (“I can’t act” protests Margaret; “Well, that never stopped me” replies Sylvester). Nevertheless, his toothless gypsy is very funny (“Very interesting. I see you’ll have no trouble opening beer cans” he tells The Hook, reading his, er, hook). Even more so during the climax, as Sylvester and the Hook take turns issuing the crew contradictory instructions; The Hook’s already ripe oaths are well and truly overboard by this point: “I’ll slay his gullet!”

Margaret: Haven’t you any backbone?
Sylvester: Yeah, but it’s nothing like yours.

Right from the opening narration, introducing “The most bloodthirsty pirate in history”, Bob is in there telling the audience: “That’s not me, folks. I come on later, I play a coward”. Cowardly Hope doesn’t have Bing Crosby as the undiluted opposite this time, so he has to do a few noble things along the way to failing to get the girl. Before becoming convinced – erroneously – that Sylvester really is brave, Margaret is disgusted at his behaviour: “Are you a man or a mouse?” she asks as the ship is sacked. “Where’s momma?” he inquires of the nearest rodent. “Why don’t you die like a man?” she continues. “Because I’d rather live like a woman” replies gypsy Sylvester.

Later, Margaret expresses her concerns over their governor captor’s lasciviousness: “I’m frightened of Le Roche. The way he looks at me”. “Yeah, we’ve got a lot in common” agrees Sylvester. As part of his general unmanliness, Sylvester can’t even hold his drink, particularly problematic when it comes to having a bevy with the proprietor of the local inn, where it’s a terrible insult not to drink the last drop; the order for “Two small beers” reveals two absurdly oversized ones.

Self-deprecation regarding his looks are also part and parcel of the Hope act; “Wait, I’ll take off this putty nose…” he tells Margaret, getting out of his performance gear after they meet, before adding “Fools everyone”. Further, when The Hook describes Sylvester to La Roche, he doesn’t hold back: “Of course, he has a quick and pleasant wit… But as a figure of a man… I’ve thrown the carcases of better than he into my trash cans”.

Sylvester: What kind of actors do you like?
Inn Patrons: (as one) Dead actors!

Hope’s characters generally are not so talented either, such that “My act is known all over Europe. That’s why I’m going to America”. He’s announced as “the imbecile in the next cabin”, rather than Sylvester the Great (“This sword doesn’t really go through me – I couldn’t stand that five shows a day”). Sylvester is keen to make a buck at the local inn (“Five acts of ye Vaudeville. Also ye Goldwyn Girls”). Unfortunately, the crowd there “don’t like impressionists, or actors who dance” (above). “I’m sure your face is familiar” mutters The Hook later: “No, no. It’s just the jokes” replies Sylvester. (“You haven’t lived in this town for very long” observes the innkeeper. “Has anybody?” comes the reply).

Sylvester: And you should have seen the show I did on the road to Morocco.
Margaret: Were you good?
Sylvester: Good? I’d have been sensational. Only, some average crooner with laryngitis kept cribbing my act.

And then there’s the meta. Right down to Sylvester’s surname, the ribs at his frequent co-star flow freely:

Hope drops in many a contemporary reference – “Tell me more, Tyrone” (The Black Swan, 1942) – and the occasional obligatory (and in this case) rather lame political one; in reference to friends “in the south” he quips “Oh, a Democrat, huh?” The best gag, though, comes with Sylvester losing out on Princess Margaret to a common sailor with whom she’s in love: none other than a final-scene cameo from Crosby himself.

Sylvester: How do you like that? I work my brains out for nine reels, and a bit player from Paramount comes over and gets the girl. This is the last picture I do for Goldwyn!

And it was. And the only one. Samuel Goldwyn borrowed Hope from Paramount for twelve weeks.

As mentioned, there’s much amusement to be had from The Hook’s invective: “Make haste, you blasted sons of unholy mothers”; “Slit her throat and throw her to the sharks”. “And then he’ll split your gizzard” advises Featherhead: “Yeah, I knew he wouldn’t forget that”, gizzard splitting being The Hook’s number one pastime.

Featherhead initially acts the fool – enamoured by gypsy Sylvester – such that “If you don’t tell anybody I’m not a gypsy, I won’t tell anybody that you’re not an idiot” (quite why he needs Sylvester for his plan is anyone’s guess). “A fool could follow it” advises Featherhead of his map; “Oh, are you coming with us?” “He’s twice as smart as I am” Featherhead advises of his cousin; “Oh, a halfwit, huh?” The laugh – and his taste for eating maps – eventually elicits a string of one-liners: “Are you wearing woollen underwear?”; “Was your mother ever frightened by a ghost?”

When Hope died at one hundred – a steady supply of adrenochrome? – The Slate declared “Even the most determinedly fawning obituarists had to concede that most of his movies and many of his “joke” anthologies were basically insulting in their unfunniness”. Which is likely the verdict of someone who can remember his telecasts but not his movies. Well, okay. With the post-1952-ish ones, the statement’s a fair call.

*Addendum 22/08/22: This is not to suggest Brice Taylor’s testimony isn’t both persuasive and compelling.
*Addendum 12/09/22: While Marshall’s recall could vary, my understanding is that 95 percent of his account was accurate. 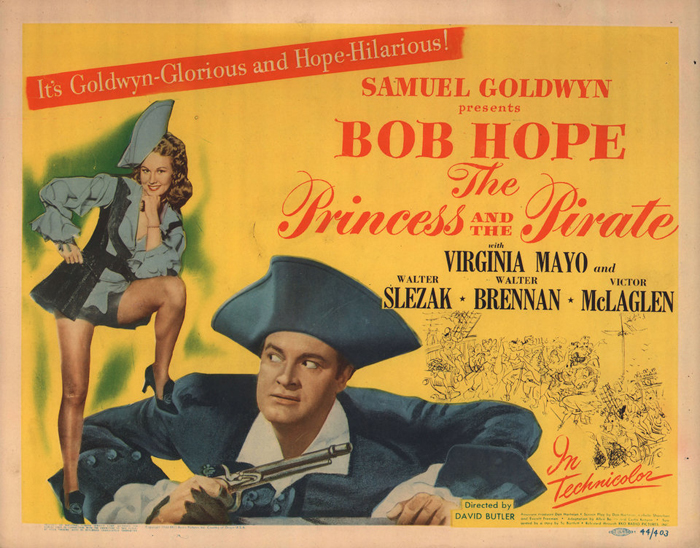 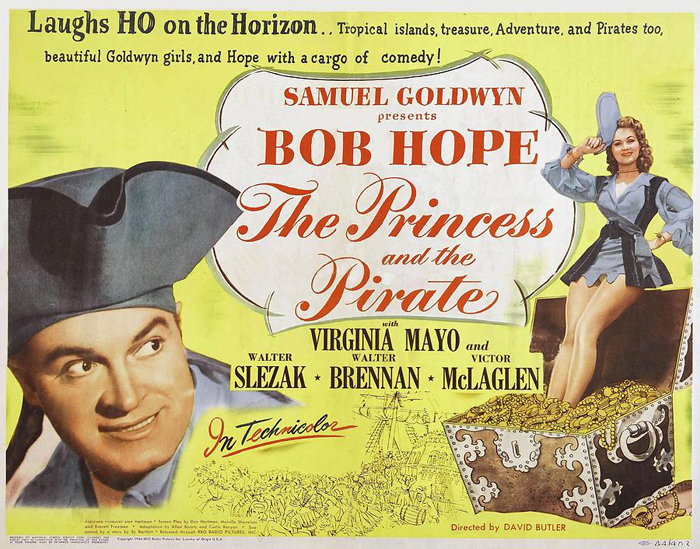