I’ll probably get blamed for that.

Scorsese’s finest? Definitely his most underrated picture, even given it has found its own loyal niche. After Hours is atypical in the sense of embracing a broader comic flair, broader even than the satirical swipe of The Wolf of Wall Street. It also manages to be one of his most human movies, in spite of a technical engagement suggestive of early Coen Brothers or Sam Raimi, where exaggerated camera movement and impactive editing are as – or more – foregrounded as performance.

An early entry in the “Yuppie nightmare” subgenre (see also Something Wild), After Hours is also party to urban terrors found in the likes of Vamp, as Griffin Dunne’s computer data entry worker Paul, looking for release from an empty job and an empty apartment – a corporate malaise also afflicting Peter Riegert in Local Hero – seeks something fulfilling (empty sex) when he meets a girl (Rosanna Arquette’s Marcy) in a café. Unfortunately for Paul, his libidinous pursuit leads him into a late-night SoHo odyssey without end, one of unwise encounters, mistaken conclusions, suspicions, accusations and ultimately, flight from a rampaging mob.

After Hours had been written by Joseph Minion (later Vampire’s Kiss) as a thesis and a Sundance project. Lies, inspired by a Joe Frank short story, was being shepherded by Dunne and his producer partner Amy Roberson (as an actress, she had appeared in Mean Streets). They initially had an eye on Tim Burton, high off Vincent, but he made way once Scorsese showed an interest.

The director was coming off twin failures, The King of Comedy, which had been feted but bombed, and The Last Temptation of Christ being put into turnaround by an uneasy Paramount. It would later get made in 1987 for Universal, accompanied by expected waves of controversy. Scorsese was in a funk at the time, thinking he would never make another film, and as a result, Paul’s frustrations reflected his mindset. The project was cheap, to boot, which meant it wasn’t too important that it wasn’t a big hit (besides, he would follow it with proof that he could be commercial, The Color of Money).

Reactions to A Night in SoHo – Last Days of Soho, anyone? – were mixed positive. He scooped the Cannes Best Director award, which revealed, due to its specificity, how both the plaudits and complaints were skewed. Pauline Kael was in the latter camp, denouncing its perceived shallowness at length, summarising it thus: “It’s a technique-conscious movie that may seem sparkling and wondrous to technique-crazy moviegoers”. Guilty as charged, m’lud. But Pauline, can I say “De Palma”? Was there ever a more technique-conscious filmmaker, and one with whom you were more hopelessly besotted? She saw After Hours very much as a commercial piece in conception, despite its budget, a “vacuous polished piece of consumer goods”, one “as airheaded as the current Hollywood package jobs”.

Others suggested the opposite. Paul Taylor in The Film Yearbook Volume 5, attempting to coin a catchment phrase of “the New Grotesquerie” (sharing ground with Prizzi’s Honour, The Stuff and Static), argued that After Hours was, in fact, following in the unfriendly footsteps of The King of Comedy, “extending that movie’s fingers-down-a-blackboard ambience in such a risky follow-up”. He suggested “very few other directors could come up with something this unsettling when their star is in its ascendency, let alone when they might be excused for running for cover with some cosy, cuddly fantasy”.

And it’s true the picture is far from Spielbergian. On the other hand, Al Clark in the same volume recognises “a master showing off his box of tricks on a fizzy, knowing black comedy that glows and jokes and teases”. Geoff Andrew identified a similar push-pull in Time-Out, whereby this “screwball comedy is perhaps his most frightening picture to date”. Such tonal bumps would become currency a few years later for Something Wild, after all (the same year’s Into the Night would offer a different kind of nightmare, the waking kind, in stark Californian sunshine and director John Landis riding characteristically roughshod over any pretences at thematic curation).

Perhaps this is the key, though. After Hours finds a master blending genres in a manner that doesn’t necessarily attract a niche audience. As such, it’s somewhat ahead of the curve. In his chapter on “the post-modern horror film” in Nightmare Movies, Kim Newman called it “The most important post-genre horror”, whereby the director offers “an ostensible comedy that is as indebted to the structure, logic and horrific grip of your worst nightmares as Night of the Living Dead, The Texas Chainsaw Massacre or Halloween”. He summarised thus: “Like all great nightmare movies, After Hours demonstrates the existence of a world of utter horror just a few short steps away from prosaic normality”.

Indeed, Newman also noted that, in terms of putting the hero through the mill (punishing or martyring him), it skewed closer to classical farce; the point in the proceedings, later on, as Paul is attempting to evade vigilante “justice”, and he sees a husband stabbed by his wife through a window, elicits a resigned “I’ll probably get blamed for that”. It’s the picture’s biggest laugh, because its currency is more often than not profound discomfort; that’s the key to knowing Scorsese is successful in having us identify with Paul, no matter how much Paul himself, at times, attempts to dissuade us of such association.

Lloyd: I do not intend to be stuck to a doing this for the rest of my life.

Newman refers to Paul as “shallow but pleasant”, something Kael identified as a lack of discernible character, but it’s the creeping awareness of this shallow attitude that gives the picture its charge. The picture has been identified as relating to absence of control, and emasculation anxiety, and it is those things, definitely, but more too. Kael called it a “motiveless” picture. It isn’t motiveless, it simply isn’t instructional. The emphasis on surface – on technique, if you like – underlines that Paul is as empty as his apartment and his job (something Bronson Pinchot’s newbie is upfront about). Paul believes he can divert his frustrations, from the dissatisfaction that comes with hollow materialism, but sets his sights on similarly unfulfilling sexual outlets. Which leaves…

Certainly, the final shot, a delirium of camera movement as Paul is neatly deposited back at his office and returns to his desk, reveals he is no longer there. Has he been spirited away? Has he had enough, realising that not only is there more to life, but that on every level his life just is not working?

It seems Scorsese was vacillating over the ending, considering one where Paul, trapped in the sculpture by June (Verna Bloom), remains ensconced; my thought revisiting the picture was that such an ending would have been the Amicus portmanteau choice. I haven’t seen A Bucket of Blood, in which Dick Miller is a sculptor who similarly entraps living victims; here, Miller is a sweetheart giving out free coffee and catching Marcy’s blown kisses.

The director’s mentor Michael Powell was adamant that Paul should end up back at his office, a remarkably shrewd and savvy understanding of the character’s underlying existential plight (and mercifully far from the pseudishishly cobblers notion of Paul climbing into June’s womb and being birthed on the New Jersey turnpike. Although, I’m still not entirely convinced someone on the Internet didn’t just make that up).

Paul: I said, I want to see a plaster of Paris bagel and cream cheese paperweight. Now cough it up.

Basically, anything you can attain, through desire, will be your undoing; indeed, the response to Paul’s final plea “I just want to live”, at his most heartfelt, if instinctive, is that June will deny this through the application of a terminal overcoat. Paul encounters inverse ratios at every turn. He’s trapped where he is due to a lack of money, which is everything about status. Marcy is batty, offering him a wink and patronising coaxing or falling apart, and he eventually suffers from a case of the red herrings (making an escape at least in part due to perceived burn-victim status). He wantonly lusts after Linda Fiorentino’s Kiki (“You have a great body”), but she falls asleep on him, so square is he. Julie (Teri Garr) wants him but he can’t wait to escape her, and all he wants from Gail (Catherine O’Hara) is a phone call, but she makes sure to scupper that (“I don’t want any entertainment!”) The furtive gay guy (Robert Plunket) he “picks up” asks him to leave when he realises all Paul desires is a couch.

Paul: You misunderstand me. I didn’t ask what you did for a living.

No one is interested in his troubles – Kiki, gay guy – and in fairness to them, he isn’t interested in anyone else’s; when he discovers Marcy is no easy lay, he’s out of there. He’s outright rude to Julie (Teri Garr), and when Gail (O’Hara) leads a vigilante mob and June (Verna Bloom) decides to seal him in permanent papier-mâché, it’s no more a representation of the predatory female than it is the libidinous male called up short. Paul wants what he can take, and Horst (Will Patton) is quite correct to call out his manners.

Because he’s actually quite self-centred, opportunistic and manipulative himself, suggesting he is, in some way, manifesting these retorts to his own superficiality. Andrew expressed a concern that the picture nursed “a nagging undercurrent of misogyny”, but that it’s in the nature of the id world Paul is exploring (only Heard’s non-transgressive, safe bartender Tom is sympathetic, until he talks to Gail anyway; O’Hara meanwhile makes by far the movie’s most convincing of its various female fruit loops). You might see the argument with lines from Marcy like (“to tell you the truth, I slept through most of it”) in respect of rape by her ex-boyfriend (sympathetic Tom). But on the other hand, there’s her Wizard of Oz anecdote (“So I just broke the whole thing off”).

Scorsese’s New York isn’t threatening in and of itself here; it isn’t a distasteful place the way it is in Taxi Driver, or inherently threatening the way John Carpenter’s is in Escape from New York; it’s only when Paul interacts with it that disturbing and potentially violent repercussions ensue. As a visual stylist, he and Michael Ballhaus pull out all the stops, from the frenetic taxi ride (that loses him his money) to the camera free-for-all of the conclusion. Along the way there’s deliberate, punchy editing (courtesy of Thelma Shoonmaker) in aid of the unsettling (the burns book) or bowdlerising (the thrown keys; Kael called it a “speedball” effect, evidently feeling the need to take a swipe at Marty’s addictive history).

Dunne’s great, aloof and diffident and desperate. Arquette is exactly as unnerving as Marcy is intended to be (I tend to associate her most with this role). Husky Linda Fiorentino is both exotic and unnerving. Cheech and Chong are exactly as present in the plot as they need to be, and Garr is wonderfully borderline in her grip on a version of reality (all beehives and Monkees). Howard Shore’s score is genius, sprightly and quirky, but applying a ticking, ticking insistent pressure – which may be Scorsese’s addition (Goodfellas’ final hour), but either way, it’s great.

Scorsese’s best movie? After Hours may not be his most accomplished, or reflective of his abiding obsessions, but it conversely feels like his most human affair, the one where he doesn’t have a grand theme, plot or event to prop it up and reflect off. Taxi Driver, after all, is Schrader’s psyche. This is about a jangle of nerves, undone by the injustices of the world that may in fact be of its victim’s own making. 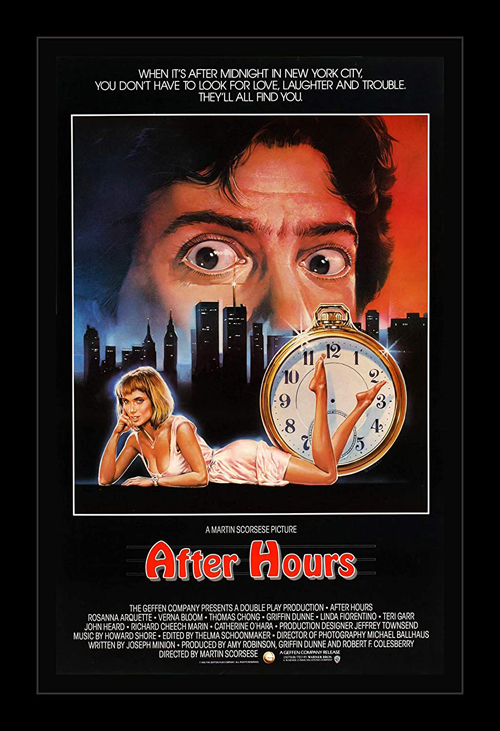