A handsomely mounted Southern melodrama that competed for Best Picture Oscar with such luminaries as Citizen Kane, The Maltese Falcon, Sergeant York and How Green Was My Valley, The Little Foxes has rather faded from view over the years, yet it still has much to offer… if you can get past the godawful wall-to-wall soundtrack (I’m hesitant to call it a score, as that would suggest some kind of legitimate intent).

This is yet another of the extraordinarily prolific, awards-piquing combinations of William Wyler and Sam Goldwyn that included Dodsworth (1936), Dead End (1937) and The Best Years of Our Lives (1946); without Goldwyn, Wyler also had The Letter (1940), with this movie’s Bette Davis, Mrs. Miniver (1942) and The Heiress (1949). Six Best Picture nominations in an eleven-year span!

Lillian Hellman adapted her own 1939 play (which starred Tallulah Bankhead), the title a quote from that most earthy and licentious of biblical books (The Song of Solomon); the foxes are, essentially, the Hubbards, partial to spoiling “the vines; for our vines have tender grapes”. Mercurial Ben (Charles Dingle) and Oscar (Carl Benton Reid) have inherited family wealth, all of it off the back of exploitation and ruthless conniving. As Horace Giddens (Herbert Marshall), fatally-ill husband of the brothers’ Sister Regina (Bette Davis) notes, “There must be better ways of getting rich than building sweatshops and pounding the bones of the town to make dividends for you to spend”.

The Hubbard brothers – in consort with Regina, dependant on her husband’s financial support – are brokering a deal with a Chicago businessman for a local cotton mill, the establishment of which will make them a mint (not that they aren’t comfortably off anyway). But the financing of their share requires the approval of sickly Horace, who proves not at all convinced when he’s persuaded to return from his stay at a sanatorium through opportunism on their part. The brothers hatch a scheme whereby Oscar’s feckless oaf of son Leo (Dan Duryea), a bank teller, will appropriate the bonds in Horace’s safety deposit box; they will be back before he knows they’ve gone. Naturally, this doesn’t go as planned.

The Little Foxes isn’t a tale of righteous forces triumphing over unwholesome materialism, however. It’s one of those eaten by greed, further self-immolating and getting no wiser in the process. The decent folk – besides the black help, all lacking agency in a manner that wouldn’t see it rewarded with a remake anytime soon – are in one way or another downtrodden or debilitated. Horace, once smitten with Regina, can take none of her calculated scorn and disdain. Their daughter Zannie (Teresa Wright) is blithely oblivious to her mother and uncles’ machinations, so the process of the picture involves a rude awakening. And poor Birdie (Patricia Collinge) drowns herself in drink, beaten down both verbally and physically by husband Oscar, and struck by the realisation of Leo, “My very own son, and I don’t love him”.

Davis is the star attraction, of course (and loaned to Goldwyn by Warner Bros), but this is very much an ensemble affair. Try as she might, she’s unable to overpower the proceedings. Marshall holds his own in any scene through Horace’s steady moral rectitude, while Dingle, as a palm-greasing opportunist but also a gregarious personality, supplies most of the humorous content along with an easy going, take-it-as-it-comes philosophy (Dingle, Reid, Duryea, Collinge and John Marriott all featured in the Broadway production). And Wright, who would go on to play daughter to Collinge in Hitchcock’s Shadow of a Doubt two years later, is winning as she traverses the terrain from wilting violet to escaping her mother’s clutches and leaving her alone (in contrast to the stage play, she has a man, Richard Carlson’s David, in John Krasinski mode, to run away with).

Nevertheless, Davis has the crucial moment, lifting, if you can call it that, The Little Foxes from low scheming to murderous intent, when she allows Horace, stricken and grasping for his medicine, to go after it himself. He collapses, and only then does she think better of her act and call for assistance. The gesture is too little too late, and her impervious expression upon his demise, and subsequent practicality (75 percent of the deal, which her brothers attempted to exclude her from, shall be hers), is the breaking point with Zannie.

Davis reportedly butted heads with Wyler, both wanting different things from the production. She purposefully played Regina differently to Bankhead; perhaps the first name influenced her, leading to a cold regality rather than a pugnacious person struggling for her rightful share (as a woman, and so granted no inheritance). Wyler wasn’t a fan of her choices and makeup, in particular. And he had a point; while her performance is commanding, it seems verging on a caricature of a remote, clipped Davis role. Contrastingly, she had a point that the grandiose family lodgings befit those who have it all, rather than want or need more.

Davis scores with the occasional amusing line – maybe not from uncredited script doctor Dorothy Parker’s pen, although it wouldn’t surprise me – such as, upon her brother noting, in relation to suggested nuptials between Leo and Zannie, that it’s acceptable because their grandparents were first cousins: “Yes, and look at us”. The picture ends on Regina left alone, but Davis has done nothing to create empathy for her on any level, making her fate less effective than it might otherwise have been. And dropping Birdie from the proceedings after she gets sloshed seems unnecessarily blunt.

Davis earned her fifth Best Actress Oscar nomination; Wright and Collinge cancelled each other out for Best Supporting Actress (it went to Mary Astor). Cinematographer Greg Toland beat himself to a nomination for Citizen Kane (Arthur C Miller won, inconceivable as it may seem, for How Green Was My Valley). The movie was rewarded for none of its nine nominations, a record unbeaten until The Turning Point (eleven) and then The Color Purple. Pauline Kael called it “a handsome movie, well contrived and showily acted”, and it is that. If you can get past the damn music. 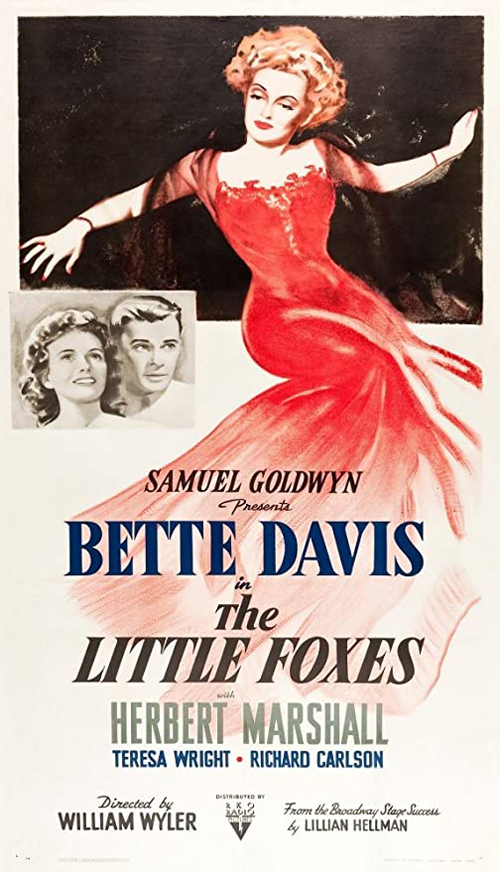