Michael Crichton’s sophomore big-screen feature, an adaptation of colleague Robin Cook’s novel, and by some distance his best. Perhaps it’s simply that this a milieu known to him, or perhaps it’s that it’s very much aligned to the there-and-then and the present, but Coma, despite the occasional lapse, is an effective, creepy, resonant thriller and then some. Crichton knows his subject, and it shows – the picture is confident and verisimilitudinous in a way none of his other directorial efforts are – and his low-key – some might say clinical – approach pays dividends. You might also call it prescient, but that would be to suggest its subject matter wasn’t immediately relevant then too.

Coma arrived at the tail-end of the 1970s paranoia/conspiracy cycle, one that took in luminaries such as The Parallax View, Three Days of the Condor, The Conversation and All the President’s Men. The latter might have been a turning point, one favouring the post-Watergate illusion that you can bring down the villains, or that the villains themselves are no more than less-than-ripe apples in an otherwise well-upholstered barrel. Following it, we still got an occasional Silkwood, Defence of the Realm or (well, once it was taken off the shelf) Winter Kills, but the generally favoured conclusion was of order restored, no matter how dire the warnings along the way (The China Syndrome, Capricorn One, WarGames). So Coma, for all that it nurses The Parallax View’s profound unease at impenetrable corporate machinations amid gleaming, impersonal architecture, concludes that the bad guys will indeed be brought to justice, especially so if they’re Richard Widmark.

We are, of course, inhabiting an environment right now where wilful medical neglect, malfeasance and corruption is operating at unparalleled, genocidal levels, so in that respect, Coma probably is positively meek in its warnings. But Crichton has a pretty acute sense of how it could be that care practitioners and those upholding a Hippocratic oath end up doing the deadly. Some simply aren’t inquisitive, accepting the assurances of their superiors and keen to assuage guilt (anaesthetists). Others are consumed with/ distracted by politics and the chain of command (Michael Douglas’ Bellows). Everyone is covering their arses. Everyone wants to believe the most acceptable, non-confrontational answer.

It’s an environment where it’s very easy for plots to percolate, because there is an express urge to remain oblivious. Consequently, comas are induced and – at the other end of the scale, where there is active complicity – their organs are farmed out. We’ve had much talk of this kind of thing, from the extreme of administering midazolam in care homes to the apparent contradiction of nurses putting on dance routines while overstretched wards lie empty, and patients are turned away from receiving attention. Which sounds more like science fiction?

Crichton’s movie doesn’t have a huge cast, one of the areas Pauline Kael criticised it for, but they are economically used to present charged perspectives and positions. Our protagonist, Dr Susan Wheeler (Genevieve Bujold), is systematically undermined for daring to take a questioning stand. If she isn’t being slandered for her womanly weakness (as Geoff Andrew put it in Time Out, the picture exposes the “patriarchal nature of the medical profession”), she’s being threatened – as is anyone who doesn’t fall into line – with an end to her tenure: “I certainly don’t think we want to lose a good surgical resident”.

Bellows: She’s paranoid. Thinks there’s a conspiracy.
Harris: Does she think you’re involved?
Bellows: No, I don’t think so.

Doctor George (Rip Torn) is only interested in deflecting any attention brought to bear on Boston Memorial Hospital’s anaesthesiology department. Bellows, whom Susan is seeing, is most engaged with playing the politics of the hospital (“Your day is always the same” she asserts), at the expense of their relationship and trust; the movie is good at playing up Douglas’ essential untrustworthiness. He’s also more than ready to fall back on stats to justify the party line. It’s only when dealing in “hypotheticals” that other doctors prove more than willing to play the “how to kill a patient” game (Ed Harris shares a discussion on the best method of inducing a coma without anyone detecting it was done intentionally).

Most significant is Richard Widmark’s Doctor Harris (the chief of surgery), holding forth on the long-term perspective, one that presumes the Elite feel the need to justify their immoral positions morally, or at least that their minions do. “When you’re older, everything is complicated” he explains, before wrapping his unconscionable acts in vaguely utilitarian language: essentially, if the end result is a vaguely conjectured “better world”, then anything goes. This is the stuff of great resets and depopulation agendas, even though that is no more than flim-flam marking altogether darker intent (ie it’s not to make a better world, simply one that more accurately reflects the one its refurbishers favour).

Harris: We must always take the long view. Not of the individual, but of society as a whole.

Harris talks of “momentous decisions” in respect of essentially treacherous areas (“about the right to die, abortion, terminal conditions, prolonged coma, transplantation”), all of which lend themselves to equivocal thinking: “Decisions about life and death” and ones that invariably require the one making the decisions to lean in a direction no scrupulous person would. He explicitly leans towards the idea that science (or medicine) is the new religion, the new article of faith. Such that “The great hospital complexes are the cathedrals of our age” and doctors are the priests (“Society’s leaving it up to us, the experts”, and “A whole nation of sick people turn to us for help”). They’re shepherding a flock (“They’re children”). A flock that doesn’t matter: “Because medicine is now a great social force. The individual is… too small”.

There may be an inclination to view this as hyperbole, in the grandstanding manner of Network, but Harris’ arguments are well-versed. Now, does that mean Crichton was in on the game, the way leading eugenicists (Wells, Huxley) were, in their “warnings” of a dread future? Who can say for certain, but he was undoubtedly a populist predicative programmer, forwarding, “legitimising” and/or inspecting such subjects as dinosaurs, DNA theory, gender politics, transhumanism, germ theory, race relations, alien contact, AI, and nanotech amongst others. They’re all areas that are as much about myth spinning as they are (or may be) related to legitimate discussion points. Whatever his dire warnings of science unchecked, Crichton was essentially, innately, an advocate of mainstream science, and thus one to double down on the predominate paradigm being enforced.

Are the Elite engaging in widespread organ harvesting? Is institutional medicine one big racket? Don’t worry yourself about any of that. Michael has saved Genevieve and it’s all all right. That final part of Coma is a bit of a stretch, it has to be admitted. Crichton indulges its thriller side fairly convincingly most of the time, even when Colonel Decker (Lance LeGault) is pursuing Susan like an unstoppable Yul Brunner (she is remarkably competent in a tight spot, variously employing a fire extinguisher and cadavers in aid of her cause, and escapes the Jefferson Institute on top of ambulance, following an early example of surveillance tech employed at her expense).

Bujold’s strong throughout, bringing nervy conviction to the proceedings. Which makes it the more disappointing that, given she doesn’t even trust her boyfriend, she should go and confide in Harris. As for Bellows coming to the rescue, it’s arguably a retrograde move in removing agency from the main (female) protagonist, and kind of dumb, since Bellows could simply intervene, instead of racing against time to the basement and letting Susan undergo an unnecessary procedure. That said, the sequence is remarkably suspenseful despite itself.

While I’m at it, I should note that, as justifiably iconic as the SF imagery used for the movie’s main poster pictures is – partially clothed coma patients suspended by wires to prevent bed sores – it doesn’t appear to be even remotely a feasible method; even in the brief time of shooting, it’s clearly shockingly bad for the backs of those extras employed. A few names to note besides Ed’s appearance: Tom Selleck, Lois Chiles and Philip Baker Hall all appear, and all would go on to much bigger starring parts.

Kael appeared in contrary mood when she reviewed Coma, complaining about it switching to “science-fiction fantasy” at the Jefferson Institute. It was “impersonal, detached” and “shallow material”: “The picture is all plot; it glides along smoothly, as if computer-operated”. As if any of these things are necessarily demerits. Indeed, she opined “Something needs to break loose; tossing cadavers around shouldn’t be this hygienic”. You can imagine her complaining of precisely the reverse, if it was as “essentially sleazy” as the bodysnatching theme suggested.

I’d argue that, contrary to her position – “We don’t go to a film like Coma for realism; we want the director to push the big scenes over the edge, to give them a twist and dislocate them” – it’s precisely this chilly grounding that makes the movie so effective. Still, she certainly had an undeniable flair for describing a performer, as evidenced by Bujold’s “slightly mouldy Peter Pan pertness”.

I’ll side with Andrew, though, calling Coma “one of the most intelligent sci-fi thrillers in years” and relishing its clinical authenticity. Crichton made a movie about the impersonality of the medical establishment. Its frostiness is entirely coherent to its subject matter, and its charge remains evergreen. 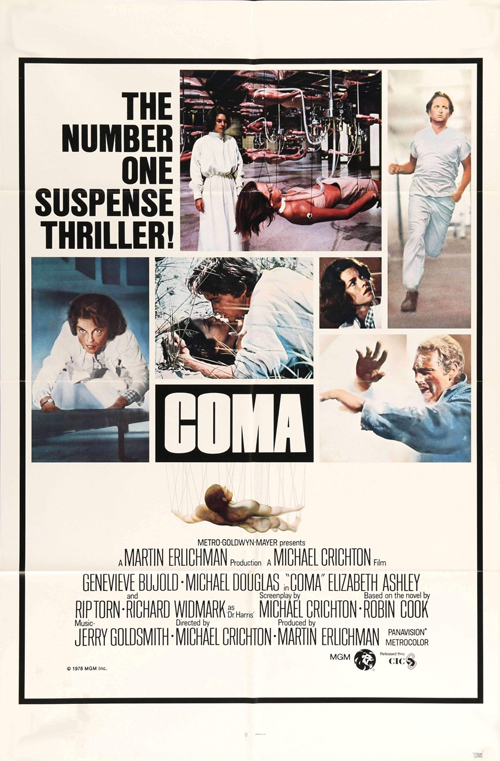