You run the job, but I run the show, and don’t forget it.

Sam Peckinpah at his most mainstream – The Getaway was a big hit – but he’s still decidedly on the untameable side. Although, in contrast to Alec Baldwin’s intimations, it seems screenwriter Walter Hill was entirely pleased with the way the director interpreted, and collaborated on, his material (take a look at how little the 1994 remake differs, and you’ll be left wondering what exactly Walter was paid for second time round). The Getaway’s a good movie, but it isn’t a great one; Hill excised the more outré aspects of Jim Thompson’s 1958 novel, so yes, there’s still infidelity and mistrust, and an entirely sordid subplot with an unseemly antagonist. But the cannibalism is out. Which is a wonder, as I’m sure Sam would have loved that.

As I’ll suggest when looking at the remake, there’s a key area where the 1994 version scores over the original; it certainly isn’t in the star wattage of Baldwin, or Roger Donaldson serviceably glossing up the enterprise (and diligently preserving functionally slow-mo action sequences). No, the tangible improvement is that Kim Basinger is by far a more believable criminal than Ali MacGraw, and Basinger and Baldwin a more believable (rift-stricken) couple.

Steve McQueen is uber-cool throughout, of course, something at least partly down to his having final cut, overruling Peckinpah’s choices of sometimes less flattering shots. That said, the opening scenes, of Doc McCoy worn down by the grind of prison life, being refused parole, and then, rather than leaping instantly into the sack when he reunites with Carol (tellingly late to collect him), he mutters disconsolately how “It does something to you inside”. He consequently requires a whole (unseen) night of wifey tending him, in order to rid this man’s man of whatever this alluded-to dysfunction may be.

McQueen moves well when it comes to the action. He’s particularly convincing giving chase to Richard Bright’s thief and laying him out cold in a train carriage. His dyspeptic attitude towards a couple of pint-sized punks with a water pistol is amusing (“I’m going to break your little arm”). He also gets away with slapping Carol about a bit when he discovers she slept with Ben Johnson’s Jack Benyon (whom she also shoots). Notable too is that this is an era when the general public are highly attentive to wanted villains, yet the cops are simultaneously a fair call to be thoroughly disrespected (see also The Dukes of Hazzard, Smokey and the Bandit).

MacGraw, though. Pauline Kael, who laid into the actress with abandon for her Love Story performance, pulled no punches here either, calling her “the primmest, smuggest gangster’s moll of all time”. Kael considered her a terrible actress, and on this evidence, she wasn’t far wrong. In the interests of balance, it should be noted that MacGraw also hated her performance, so there weren’t many in her corner. There’s nothing on screen suggesting the smouldering passions Steve and Ali felt for each other during The Getaway’s making (you can read Robert Evans’ take on being cuckolded in The Kid Stays in the Picture, if you can stomach his wannabe-tough-guy prose).

Most of the rest of the cast land effectively, though. Johnson is more suited to a cameo than James Woods would be in the remake. Al Lettieri is a suitably slobby sleazeball psychopath, beat-for-beat reproduced in the 1994 version, except that Michael Madsen is rather tiresomely gleeful in his malignance. Rudy Butler hooks up with veterinarian’s wife Fran (Sally Stuthers), leading said veterinarian Harold (Jack Dodson) to hang himself. Kael called it gross (it’s out of the novel), but noted Peckinpah seemed engaged only by this part: “this type of artistic frustration only breeds misanthropy”.

Indeed, while an admirer of the director’s abilities, she called the movie a “sausage” (anyone would think it was Elvis), suggesting there was “no energy in the tossed-together script” and the picture was “long and dull and has no reverberations except of other movies, mostly by Peckinpah”. Not entirely fair, but it’s true that it’s some distance from the most essential Peckinpah and represents him very much modifying his approach to the benefit of major studio production. It still boasts many of his unruly quirks throughout, however, and there’s some very gritty cinematography from frequent DP Lucien Ballard; the garbage dump resembles a straight-up apocalyptic wasteland.

Thompson was initially hired to write his own screenplay, one that included the novel’s ending; in this, Doc and Carol reach the criminal haven kingdom of El Ray, across the border in Mexico, only to discover the cost of living is unsustainably high. This leads to criminals killing criminals for funds, since the alternative is being cast out to a nearby broken-down cannibal village; Doc and Carol are faced with the prospect of one killing the other in order to ride it out a little longer. McQueen objected to the turn as depressing, unsurprisingly, and Hill came in to save the day. Revelling in cannibalism is possibly a little too close to home for Hollywood. Peter Bogdanovich was attached at this time, but Evans tossed him because he insisted on then belle Cybill Shepherd starring (with hindsight, she couldn’t have been worse than MacGraw. Could she?)

In came Peckinpah. But with McQueen wielding final cut, Jerry Fielding’s score was nixed in favour of a fresh paint job from Quincy Jones. And his is mostly a very good score, very vibey, discordant and arresting, although there’s a little too much harmonica thrown in for my tastes. Also to be seen are Slim Pickens as the cowboy who drives our protagonists to Mexico, Bo Hopkins, and John Bryson, as Benyon’s brother, bearing a distinct resemblance to Vic Reeves’ character Kinky-John. You know, the stand-up act employed by Vic Reeves’ character Paul Baron, owner of the fourth best club in Hull.

Hill seemed proud of his “tossed together script”: “One of the pleasant surprises of my life was how little Sam changed my Getaway script while they were shooting. And I thought it came out to be a pretty good film – certainly well directed, well shot, and for the most part, well acted”. Yes, I’d suggest it’s abundantly clear to whom he’s alluding in the last part. Some would have this as McQueen’s last great part and last great movie (others will give him Papillon), and it’s certainly the last time he was exuding the particular brand of cool that made him a ’60s icon (Bullitt, The Thomas Crown Affair). The Getaway’s rather hollow, but as a brand product, that’s entirely apposite. 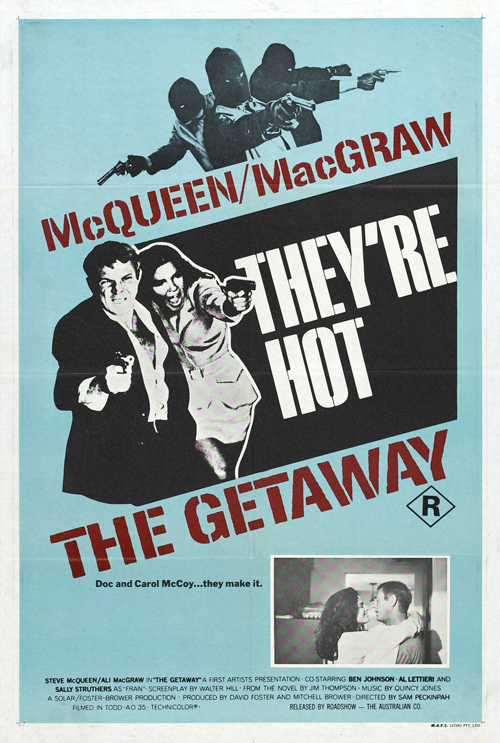 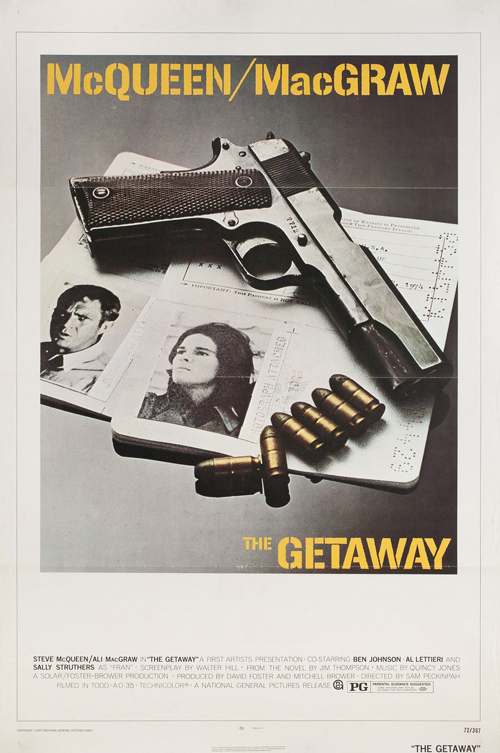