Bing Crosby was winningly self-effacing when he accepted the Best Actor Oscar for his easy-going Father (Chuck) O’Malley in Going My Way: “This is the only country where an old broken-down crooner can win an Oscar for acting. It shows that everybody in this country has a chance to succeed”. One might construe he doesn’t think everybody deserves to from that, and certainly, Time Out’s Adrian Turner didn’t hold back when blasting this “godawful Oscar-winning schmaltz”. I wouldn’t go nearly that far, but it is overly enamoured of its own sanctified intentions, to the extent of almost flatulent self-indulgence, and the old broken-down crooner’s crooning only accentuates such tendencies.

That Going My Way won Best Picture may seem absurd to anyone encountering it today, but context is everything; this was peak WWII, and Oscar had been doing its bit to reward the cause (Mrs. Miniver, Casablanca). Going My Way may be seen as a soothing balm, the promise that everything will be all right (its one nod to the war has the newly married young pretender to his father’s savings-and-loan empire joining the noble fight – and happily surviving after being wounded in Africa; “Some friend of his ran him over in a jeep”). Since You Went Away, the most overt contender in that regard, might have seemed simply too eager in its propaganda styling.

The awards attention yields several other points of note. Barry Fitzgerald was nominated for both Best Actor and Best Supporting Actor as Father Fitzgibbon, in a one-off quickly leading to a rule change so such a thing could never happen again. Fitzgerald apparently destroyed his Oscar playing golf, necessitating a replacement (so he took home two in the end). To watch his performance, an attack of the comic Oirish that makes Fawlty Towers’ Mr O’Reilly look restrained, you’d hardly countenance the undiluted attention; Fitzgerald was playing older (a mere slip of 56 when the picture came out) and would essay even less subtle delivery of Emerald Isle tones a few years later as Michaleen Oge Flynn in The Quiet Man.

Going My Way’s further claim to awards fame is as a Best Picture winner with a sequel (the following year’s The Bells of St Mary’s) also nominated for the top prize. The best I can figure, only The Godfathers and The Lord of the Rings can claim similar (albeit, The Return of the King scored as the trilogy finale).

Rather like Highway to Heaven or The Littlest Hobo, there are no corners of the world where O’Malley’s good-hearted beneficence wouldn’t prove an enormous boon. Here, he’s called to St Dominic’s Church in NYC, at the behest of the bishop, to subtly take charge of a situation whereby Father Fitzgibbon has been overseeing a debt-laden parish. The latter is initially put off by O’Malley’s light-touch approach (and fondness for the green, something he shared with Crosby), so has a somewhat rude awakening when he asks the bishop to move O’Malley along.

Other matters also call for O’Malley’s attention, including delinquent youth threatened with reform school, led by Tony Scaponi (Stanley Clements), runaway singer Carol (Jean Heather), and old flame Jenny (Risë Stevens), an opera singer. As you may be able to guess, most of these priestly engagements require Bing to deploy the pipes, or direct others in the same.

I suspect Chuck’s ex was included so there’d be no suspicion his priest is too interested in the welfare of the altar boys. Not that anyone ever nursed such doubts back then, of course. No fear. This, despite O’Malley showing up with a basket full of puppies and the juveniles’ concern that “Next thing you know… (he’ll be) making altar boys of us”.

The picture is better with its early-stages light comedy than Chuck’s subsequent prolific saintliness; there’s a particularly amusing scene in which O’Malley and Fitzgibbon dig in to a turkey dinner, only for the former to break it to the latter that the venerable, sweet youth who presented said turkey to Fitzgibbon had hijacked a poultry truck.

Ted Haines Sr: Son, never lend money to a church. As soon as you start to close in on them, everybody thinks you’re a heel.
Ted Haines Jr: Well, aren’t you?
Ted Haines Sr: Yes.

There’s little in the way of drama or conflict here. Busybody Mrs Quimp (Anita Sharp-Bolster, given an unfortunate sounding surname) and savings-and-loans man Ted Haines Sr (Gene Lockhart) barely register on the scale, the latter swiftly hauled into line when Jr (James Brown) weds Carol, thus neatly tying a bow round a couple of thorny dilemmas relating to debt and waywardness. As for Sr’s assertion “Priests never have any money” – he should try telling the Vatican that.

I was most surprised to learn this was the first outing for Swinging on a Star, winning one of the picture’s seven Oscars (out of ten nominations); it’s a less than auspicious version, rendered in individual lines by a company of miscreant youth, but it’s nevertheless the one song in the roster (others including Silent Night, Ave Maria and, er, Three Blind Mice) that holds the attention; I’d estimate a good twenty minutes of Going My Waycould be chiselled from the running time with the various ditties excised. Of course, the definitive version of Swinging on a Star can be found in Hudson Hawk.

Is Going My Way a Christmas movie? Not overtly so – yet probably more legitimately than the sequel, which is heralded as such – but it does culminate with a Christmas Eve mass following the church being gutted by fire. And it does carry with it a seasonal veneer of good cheer. Schmaltz? Yes, but Going My Way resembles a hard-hitting urban crime drama compared to the sequel. 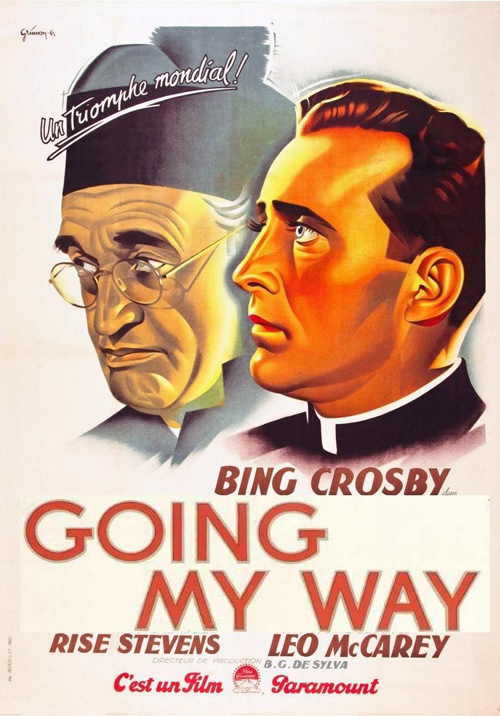