There’s nothing so restful as a nice, dark, stuffy closet.

The title sounds like a shameless Capra rip-off, and it’s suggested the original story – which was Oscar nominated – also came to the great director’s attention. That he preferred to make box-office bomb It’s a Wonderful Life while this did pretty well financially tells you everything. There’s little that’s very sophisticated about Roy Del Ruth’s envisioning of Everett Freeman’s screenplay, from the performances to the execution. But It Happened on 5th Avenue is amiable enough, with the premise, as unlikely as it is, offerings sufficient fuel to keep it going, just about, over its near two-hour duration.

Indeed, It Happened on 5th Avenue is shot through with essential well meaning. Not for Freeman the sourness of It’s a Wonderful Life, where a man learns to accept the rum deal he’s been dealt – and like it! – and the villain gets off scot free. Freeman, adapting Herbert Clyde Lewis and Frederick Stephani’s short story, can be found with his name on a range of comedies of the period, including The Secret Life of Walter Mitty and The Princess and the Pirate.

There’s a touch of Trading Places about this scenario, in which Aloyisius T McKeever (Victor Moore) a seasoned hobo, invites much-less-so ex-serviceman Jim Bullock (Don DeFore) to stay with him in a boarded-up mansion belonging to one percenter – actually even more elevated, as he’s “the second richest man in the world” – Michael O’Connor (Charles Rugger). McKeever knows to avoid the guards who show at 10pm every evening, and we later learn that, when O’Connor returns from spending his winters at his Virginia estate, McKeever duly departs to spend his summers in Virginia.

Despite being uber-rich, and despite scheming to stop Jim’s plan to buy some land to turn a disused army barracks into housing, McKeever is eventually shown to have a heart of gold. Can you imagine the same of a jab-man Bill or Blue Origin not-quite-spaceman Jeff? No, but there you are. Mike’s daughter Trudy (Gale Storm) has rocked up at the mansion, but smitten with Jim (for some unfathomable reason, as he has all the personality of a vacant lot), she elects not to reveal her identity, and they let her stay with them. Also adding to the ranks are a slew of Jim’s army buddies and their families.

This situation snowballs when Trudy persuades dad to pose as homeless person, and then her mother Mary (Ann Harding) too, estranged from Mike. So there’s enough material here, yet it never quite catches fire with full farcical potential. Mike and Mary rekindle their affection for each other, while McKeever, smoking cigars and wearing Mike’s suits, becomes your classic authoritarian type (this is especially curious, as he’s so celebrated by Mike that the latter tells Mary, in the movie’s final lines, “Remind me to nail up the board in the back fence. He’s coming through the front door next winter”).

It Happened on 5th Avenue doesn’t exactly thaw the festive fetlocks, but its third act is set during the period, with guards discovering the squatters and, being very Christmassy, asking them to be out by New Year. And Mike, having bought the land Jim wanted – while undercutting his budding romance with Trudy by having him offered a job in Bolivia, single applicants only – undergoes a Yule change of heart and lets him have the property. There’s a reason It Happened on 5th Avenue isn’t commonly cited among the Christmas favourites, but I could see a reinterpretation of the central theme going down well today. Obviously, you wouldn’t have the second richest man in the world involved, though. No, just a moderately affluent one. 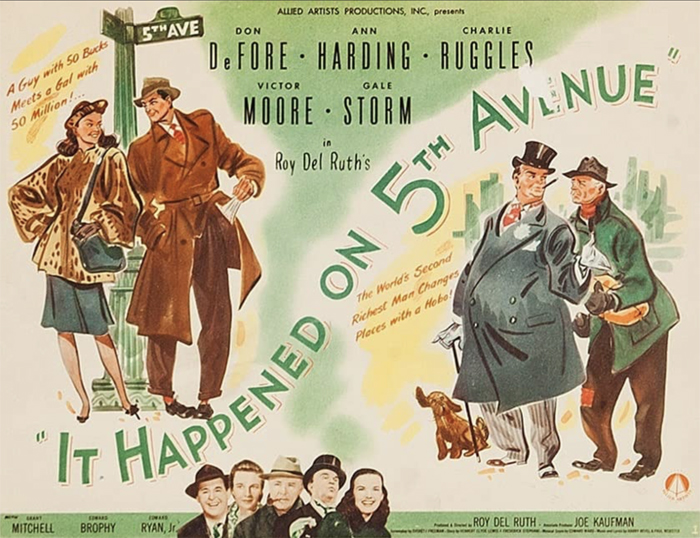