The squirrel is me, isn’t it?

Proof, if proof were needed, that some moviemakers really should not stray outside their comfort zone. Spielberg quickly realised goofball, John Landis-style comedy was not his greatest strength. George Roy Hill, who showed no prior acumen or inclination towards anything one might deem ex-SNL fare, mystifyingly alighted on Funny Farm, for what would turn out to be his last film, and proceeded to flatten it into a form more suited to his tastes. With the result that it is likely to satisfy no one.

Jeffrey Boam was very diplomatic in his description of Hill screwing up his adaptation of Jay Cronley’s 1985 Funny Farm: “It was different from what I expected – George wanted to do a much classier version than I ever imagined it to be. I imagined it to be a little cruder, more low-brow humour, rougher and more like the movies Chevy was doing at the time, but George was a classy guy and he wasn’t going to do that. He does what he does. He made the movie classy, and I think a lot of Chevy’s fans were let down because it wasn’t as raucous and vulgar as they might have expected”.

I’d say calling Funny Farm classy is a stretch, but it’s certainly entirely lacking the knockabout, irreverent energy of Chase movies at their best, which is fatal. It isn’t quite Memoirs of an Invisible Man in terms of flattening out its star, but if you effectively cut off the comedian from doing what he does best and make him near-enough the straight man, you shouldn’t be surprised if the results are middling. Ironically, Chase considers it one of his best movies, but then, he’s never exactly been a connoisseur of the best foot forward. Hence Memoirs.

Sport writer Andy Farmer (Chase) moves from NYC to Redbud, Vermont with wife Elizabeth (Madolyn Smith) so as to write that novel. But rural life turns out to be far from the expected idyll, with mosquitos, nuisance neighbours, creative blockages, disagreements and burgeoning marital strife. Unless you’re Stephen King or Woody Allen – and even then – writers writing stories about writers is an often-inadvisable path, and Funny Farm fails to make hay from the concept, with Andy turning out to be rubbish but Elizabeth a fantastic children’s author (about a squirrel named Andy who gets run over… One does wonder quite how that’s going to sell, but let it pass).

There’s an interestingly dark genesis to their venture, with the arrival in Vermont marked by the removal van’s failure to arrive until the next day, and Elizabeth secreting the only food (a banana and a very Eden-ic apple) for herself. Whatever Andy’s foibles – such as the hubris of moving there in the first place – this announces Elizabeth as very much the culpable, untrustworthy party, setting the tone for the traumas that follow.

Hill has no feel for the humorous moments, attempting to dampen them down, for the most part, to the realm of the feasible. The occasional broad episode intrudes – Andy eating a plate of sheep testicles under the illusion they’re meatballs (I mean, is there a difference?) However, the movie’s fish-out-of-water element is ultimately secondary to the marital breakdown, which in turn is remedied by… Christmas?

At least, it seems that way. Having decided on a divorce and in order to sell their house, Andy and Elizabeth persuade – promise to pay – the townsfolk to put on a show suggesting Redbud is the perfect Norman-Rockwell-painting place to live. It being the Christmas season, this means maximum Yule cheer, which in turn seems to thaw out their relationship and lead to mutual reconciliation.

You can see from the poster that Warner Bros had no idea how to sell this, and Funny Farm did unsurprisingly mediocre business (it made more than it cost but scarcely, and the following year’s Christmas Vacation grossed three times more). Hill had wanted his The World According to Garp star Robin Williams, who suggested Chase in the belief the part would be too buttoned down for his manic sensibility. Hill had been struggling with material for a decade (his preceding picture, The Little Drummer Girl, bombed).

If Hill was unsuited to the script, and Chase – difficult at the best of times – failed to find a good fit in a more naturalistic scenario, the source novel itself might also have represented a poser. Cronley novels would also be the basis of subsequent flops Let it Ride and the (pretty good) Quick Change. There hasn’t been much interest since. If you, like Jeff Wells, appreciate comedies you don’t have to laugh at, Funny Farm might be the one for you. Otherwise, it’s too little of nothing very much. 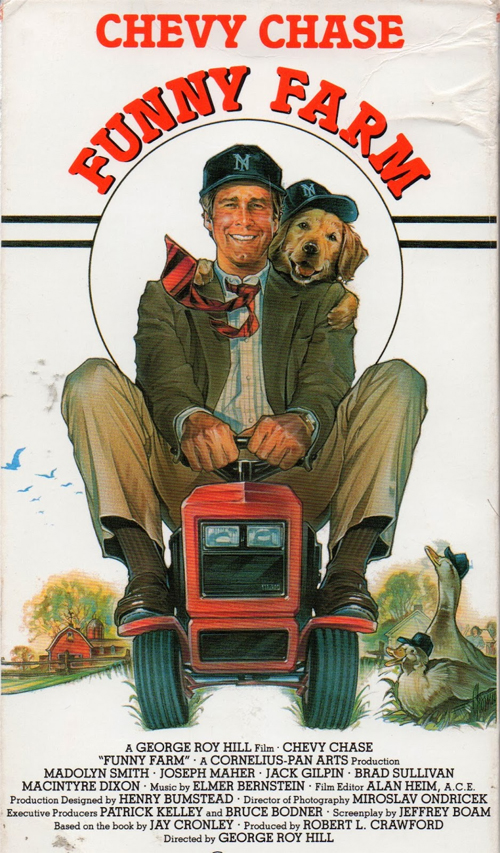