There’s a good reason this isn’t first in line for discussion of great Philip Marlowe adaptations. And it isn’t because Bogey isn’t in it (or Elliott Gould, come to that). Robert Montgomery doesn’t exactly look like a dishevelled PI – at least, on the occasions you can actually see him – but he gets the cadence right. No, the reason Lady in the Lake is largely left languishing in the icy depths is Montgomery’s leftfield creative choice as director: subjective camera.

Adrienne: Marlowe, where do you usually spend Christmas Eve?
Marlowe: In a bar. Where do you?

That’s right: Lady in the Lake is the ’40s’ Hardcore Henry. Time Out had this conceit right; it’s very difficult to make it work, and simply the idea of emulating a novel’s first-person narrative is far from like-for-like. Don Macpherson suggested “It really needed the magnificent panache of an Orson Welles, who had planned a ’40s version of Heart of Darkness… in the same subjective style”. Chandler didn’t like the result (“a cheap Hollywood trick”) and the way Montgomery approaches it, four-square, unfinessed camera, certainly makes it seem like expense was spared.

Marlowe: At least he had the decency to hit me above the Mason and Dixon Line.

The POV choice needs to advance the telling, or it’s entirely forfeit. In Cloverfield, it puts you in the melee, but with Lady in the Lake, it’s simply distracting, detracting from the murder mystery and replete with moments where you do see the detective (mirror shots or moments where we cut back to his in-person framing narration). There’s about one instance where the idea works, and that’s because it feels like a familiar POV choice; Marlowe comes round in a car wreck with a drunk leering over him (and, hilariously, the PI slugs him on the chin).

Marlowe: Mind if I go now, or do you want me to do card tricks too?

What it also does is make you wish someone would do a “proper” movie adaptation. Now, I wonder… Detective fiction. Acres of hardboiled dialogue, much of it quippy witty. Set at Christmas. Does Shane Black have anything going on since The Predator bombed out?

Marlowe: Is finding a corpse a crime?
Cop: In this town, yeah.

Marlowe gets put on a case by Adrienne Fromsett (Audrey Totter), who lures him to Kingsby Publications on the pretence of publishing his short story. She wants him to locate the boss’s wife Chrystal, who left him a month prior, telling she wanted a divorce. Adrienne herself is something of a gold digger, her sights set on the millions of boss KIngsby (Leon Armes). Marlowe duly tracks down Chrystal’s lover (Richard Simmons), learns of a body pulled from a lake near a Kingsby property that may or may not have been murderised by Chrystal, encounters a gun-toting landlady (Jayne Meadows) and a corrupt cop (Lloyd Nolan). He gets roughed up several times too, of course, and reels off a slew of made-to-order smart remarks.

Adrienne: Tell me, Mr Marlowe do you always fall in love with all your clients.
Marlowe: Only the ones in skirts.

Most of the movie’s focus is on the dame, though. Totter, who bears a passing resemblance to Lindsay Lohan, more than holds her own as the seething gal Marlowe maligns (“Not bad in this light”: it’s dark). He also has his romantic intentions, though (as much as Marlowe gets romantic). Tellingly, Adrienne is absent from the novel; even if she weren’t, it’s inconceivable Chandler would have finished up with the two pitching tents together and bound for NYC.

Marlowe decides to write his story because “I was tired of being pushed around for nickels and dimes” (so not precisely the same line as Robert Mitchum’s “Tired of getting pushed around” in Out of the Past, the cue for Two Men and a Drum Machine’s 1989 hit of the same name). There’s a problem here – besides the aesthetic one – that there’s too little sense of threat and generated suspense. There aren’t enough suspects. There isn’t enough atmosphere. There’s no tension.

And there isn’t enough festivity. The Christmas side could have been played up, undoubtedly; that pesky POV gets in the way of everything. There are amusing moments, however. The office Christmas party crashed by Marlowe, and the kid there who asks Adrienne for a kiss: “I’ve waited all year for that” he sighs soppily. “You’ve had your Christmas, son. Beat it. and tell your boss not to send a boy to do a man’s work” instructs Marlowe briskly. Elsewhere, he falls foul of the law (“Striking an officer, resisting arrest, and all on Christmas Eve”) and receives confessions of Yule yearnings (“I want to be your girl. That’s what I want for Christmas”).

Adrienne: Marlowe never sleeps until all’s well with the world.

This came out the same year as the definitive Chandler, of course: The Big Sleep. You know, the one that doesn’t entirely make sense. I don’t think that’s so much the problem with Lady in the Lake. Rather, you don’t really care whether or not it makes sense. A failed experiment from Montgomery – star of Hitchcock’s Mr. & Mrs. Smith and father of Bewitched’s Elizabeth – undoubtedly, and an insufficiently interesting one to make for a conversation piece. 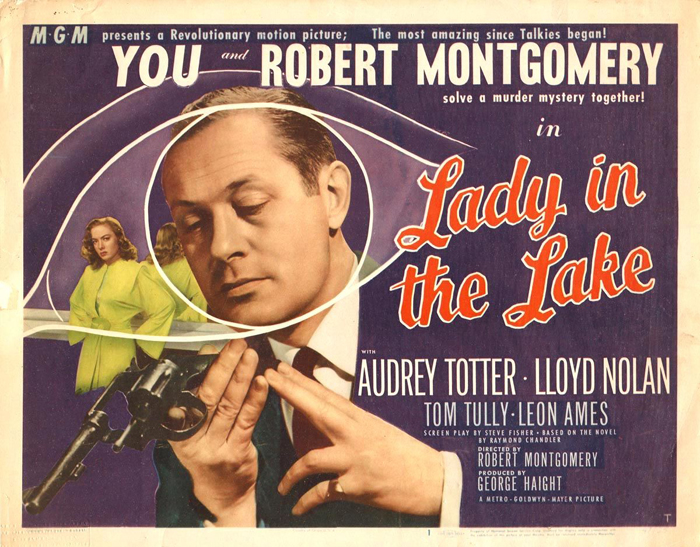