It’s always possible to find a good moral reason for killing anybody.

The Assassination Bureau ought to be a great movie. You can see its influence on those who either think it is a great movie, or want to produce something that fulfils its potential. Alan Moore and The League of Extraordinary Gentlemen. The just-released (and just-flopped) The King’s Men. It inhabits a post-Avengers, self-consciously benign rehearsal of, and ambivalence towards, Empire manners and attitudes, something that could previously be seen that decade in Those Magnificent Men in Their Flying Machines (and sequel Monte Carlo or Bust, also 1969), Adam Adamant Lives!, and even earlier with Kind Hearts and Coronets, whilst also feeding into that “Peacock Revolution” of Edwardian/Victorian fashion refurbishment. Unfortunately, though, it lacks the pop-stylistic savvy that made, say, The President’s Analyst so vivacious.

Ivan: Unfortunately, I have no monopoly on the assassination business.

I have to put that down to the director, as The Assassination Bureau gets most of its choices on target. It’s true that the screenplay, based on Jack London’s unfinished (until Robert L Fish did in 1963) The Assassination Bureau Ltd. rather wanders off course during the third act, with too much business involving political manoeuvring and a set piece on a zeppelin, but when it’s maintaining focus on the simple conceit of the titular organisation putting out a hit on its own chairman (Oliver Reed’s unflappable Ivan Dragomiloff), the material is irresistible.

Maybe someone like Jerzy Skolimowski in the euro pudding mode of the following year’s The Adventures of Gerard – a movie he virtually disowned, but which is brimming with stylistic invention and wit – would have been a better fit. Basil Dearden had made his share of comedies, including several with Will Hay back in the ’40s, The Smallest Show on Earth and the previous year’s Only When I Larf (or wince). Now in his late fifties, however, he was hardly coming to the project with the energy or irreverence of, say, a Richard Lester. The project was actually Michael Relph’s baby (a producer foremost, usually for Dearden and going back to Kind Hearts, but also writer – as here – production designer – as here – art director and director), so perhaps heshould have had a punt at helming it.

Geoffrey Unsworth fresh-ish off 2001: A Space Odyssey offers serviceable lensing, the costuming is of an expected standard, but the real MVP in terms of production value is Ron Grainer, whose magnificent score is vaguely suggestive of a similar bolstering accompaniment exceeding the actual content found in The Wrong Box a few years prior (Pete and Dud come up a few times in these affectionate Empire demolitions).

Ivan: Kill me, kill my Bureau. Is that it? What a marvellous idea.

The plot finds journalist and suffrage campaigner Sonia Winter (Diana Rigg) engaging the Bureau to off Ivan, who proves exceedingly pro the idea, since it will put the mettle of his aging colleagues to the test. Besides which, he suspects the purity of motive of the organisation may have faltered (the “betterment of the world – purging evil, striking down tyranny”). Neither he nor Sonya is aware that the bureau’s vice chairman, Lord Bostwick (Telly Savalas), also a newspaper publisher with “a genuine concern for the political wellbeing of the world”, is the motivating force behind ousting Ivan, as he believes he can bring the organisation’s influence to bear in the interests of his greater cause.

Ivan: Human life is the most expendable commodity we possess.

The Bureau is presented, then, as a well-intentioned force, its motivations underlined by the debate running through the picture regarding the notional difference between murder and assassination. Ivan admits to being “born and bred for a job”, and believes in the essential honour of his profession; in contrast, Bostwick submits that the “romantic notion of moral killing is out of date”, and that it is “a political weapon or it is nothing”. While they can both be wrong, of course, the screenplay blurs this in order to allow Ivan heroic stature; Sonya too is incriminated by her motives, her action (murder for a greater good) rather equating to that of the Bureau (“My dear, you don’t go to a butcher to buy a steak and then question the morality of the butcher in killing the cow”).

Bostwick: You’d be astonished if I told you of the courts in Europe where I wield power. Behind the scenes, of course.

It would seem Bostwick wishes to utilise the Bureau in a manner not so far from the Elite, puppeteering the players on the world stage as he sees fit. His plan, buying stocks in arms companies and then starting a world war, is very much of such a bent – and is pretty much the kind of thing Antony Sutton documented in terms of the causative nature twentieth-century for-profit conflicts, rather than, you know, an actual beef. As Bostwick says: “One death or a million. What’s the difference?”

Unfortunately, there’s little texture or intrigue attached to any of this, which means The Assassination Bureau rather peters out when the grand scheme becomes the primary focus. Hitherto, the succession of assassination attempts Ivan encounters in Paris (in a brothel, where Miss Winters is left in only her undergarments), a train (death by fiery brandy), in Zurich (blowing up a bank), Vienna and Venice (where Ivan fakes his death) are colourful and varied for the most part. They recall Ealing or Ealing-esque antics in Kind Hearts and Coronets and The Naked Truth, along with more recent, hipper ones found in everything from The Avengers’ Legacy of Death to The President’s Analyst, to The Prisoner’s The Girl Who Was Death and subsequently The Pink Panther Strikes Again.

A tremendous asset to these proceedings is Oliver Reed, occupying a very small window when he was considered a viable mainstream leading man. A year earlier, he was waiting on his uncle to give him a big part in Oliver! and a few months later, Ken Russell would push him in the direction of his better-known and bigger ’70s persona (where the closest he’d come to Hollywood would be supporting turns in Lester’s Musketeers movies). 1969 had him both as Ivan and Hannibal Brooks (his fourth teaming with gourmand auteur Michael Winner). Seeing Reed as a romantic lead, dashing and urbane, with an inevitable hint of the brute (it’s in his nature), one can’t help but consider his prospects as a potential Bond, and what might have been.

Cubby Broccoli did consider him, it seems, but was put off by the untameable nature of the beast: “With Reed we would have had a far greater problem to destroy his image and re-mould him as James Bond. We just didn’t have the time or money to do that”. It’s a fascinating prospect, whereby one wonders, even if he had won the part and managed to behave himself, how much of that lurking violence he exudes would have ultimately imbalanced the essential weightlessness of the franchise. Either way, I’m left wishing we had more of Oli as we see him here, playing against type, if you like.

Miss Winters: There can be no sexual equality while women exploit their physical appearance.

Not so much playing against type is Rigg, also that year’s (doomed) Bond girl. Rigg had just left The Avengers at this point, and like Honor Blackman before her, she dived straight into 007 (so to speak). It’s notable that only this and On Her Majesty’s Secret Service really register in her “bid” for transatlantic/ movie stardom. There were some later tentative explorations in the following decade, including a very short-lived US sitcom.

This may simply have been down to her performative preferences, but I’d suggest Rigg more naturally exudes a certain sternness over the kind of warmth that makes a movie star; she worked so well with Patrick Macnee because there was dynamite chemistry, Here, playing into clipped reserve as a rigid feminist, she more than holds her own, but the role is fairly thankless. Indeed, it’s not so different to the less-rigid Emily Blunt in the recent Jungle Cruise; a similar kind of part, except with more “heroics” latterly, since movie women can obviously now kick ass.

Compared to Mrs Peel – or even Tracy in OHMSS, which stood out as a genuinely felt romantic liaison – Sonya is somewhat functional and silly, required to show shock and outrage and prudishness until she duly discovers the lure of provocative attire and provocative Ivan. It’s impossible to tell whether she and Reed got on, although one can’t help but note Ivan’s reproof of Sonya’s renouncement of spirits: “Taken in moderation, it can greatly clarify the mind”. And not in moderation…?

Popescu: Murderers? We are assassins!

There are many notables in the cast besides two OHMSS stars (Rigg and Savalas). A clutch of former Avengers faces show up including Roger Delgado, Peter Bowles, Jeremy Lloyd, Warren Mitchell and Vernon Dobtcheff. Then there’s The Prisoner’s Kenneth Griffith. Later Bond villain Curd Jürgens is the Bureau’s German representative. We see Beryl Reid and Phillipe Noiret in the brothel scene – only one of them manages to be convincingly French.

Madame Otero: No! Do not shoot the customers!

The script offers more than enough visual gags, from the attempt to kill Ivan before the initial meeting is even over (“One should always applaud initiative”) to the bomb in a bratwurst (“A sausage – this is indeed a place of fun!”) It’s also notable for trendy lost tech (zeppelins, which were enjoying something of a revival around this time – see also The Hindenberg, Zeppelin, Chitty Chitty Bang Bang and The Island at the Top of the World) that would again find retro-favour later on.

I’d almost suggest The Assassination Bureau could withstand a remake, if you didn’t know they’d make a hash of it. It’s a picture that, thanks to its lustre – the score, Reed, Rigg –lingers in the mind as more rewarding than it actually is. It had no shortage of potential. 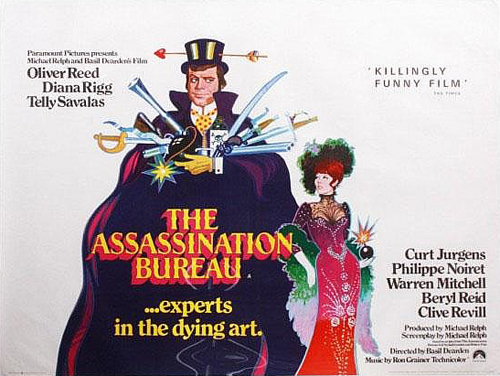 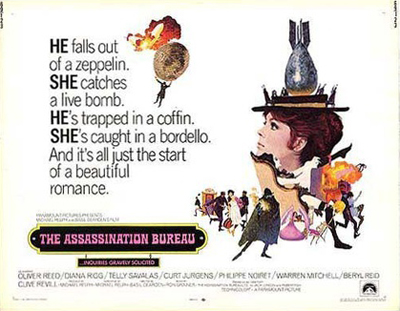