I can see you don’t know what it means to be up to your neck in nuns.

Now this, this is much closer to the “godawful Oscar-winning schmaltz” Time Out labelled its predecessor Going My Way. Albeit, The Bells of St. Mary’s went home empty handed on the night of the 18th Academy Awards (it received the most nominations of the contenders: eight including Best Picture). Instead, voters chose The Lost Weekend’s sobering tale of an alcoholic’s bender over Leo McCarey’s cockles-warming repeat of Bing Crosby being a thoroughly decent priest (I know, right?) The public were more in the mood for the schmaltz, however, with The Bells of St. Mary’s proving the biggest hit of the year by some distance (also RKO’s biggest hit ever) and returning nearly twice as much as The Lost Weekend. However, neither the critical nor box office laurels can disguise the fact that, to an unwavering latter-day eye, The Bells of St. Mary’s is turgid drivel.

Once again, Crosby’s Father Chuck O’Malley is called upon to set a parish to rights, which inevitably requires some tailor-made crooning on Bing’s part. This time, however, the absence of Barry Fitzgerald’s mildly leavening Oirish act as a foil to all that sincerity is starkly felt. In his stead, Ingrid Bergman is on hand as an impossibly holy and well-meaning nun (Sister Mary Benedict), and Bing has a school full of catholic pupils to tutor in the ways of righteousness.

Sure, there’s some potential during the opening minutes. There’s the possibility O’Malley will be outnumbered and outmanoeuvred by a gang of penguins, emasculating him in the manner of The Beguiled or Nurse Ratched. And there’s the threat of businessman Horace P Bogardus (Henry Travers, a year away from his legendary status as Clarence the angel in It’s a Wonderful Life), who has already built a big old, well young, edifice next door and has his sights set on turning the dilapidated school into a carpark (if they don’t sell, he just happens to be on the council, and if there’s a closure order, they’ll also have to pay for demolition).

But any kernel there buckles under the weight of almighty inertia. The Bells of St. Mary’s is two hours but feels like four. O’Malley and Mary have at worst a lightly, mutually amused friction, but really, they love and respect each other in as wholesomely chaste a manner as one could imagine. Mary has been praying for Horace to see the light and donate his prime building to the school, which he duly does when he has a change of heart induced by the underlying desire to be loved (Chuck forwards the idea one should be proactive and not just rely on God providing answers, and as the proceedings play out, there’s no miracle involved. But then, mysterious ways and all that).

Mostly, though, The Bells of St. Mary’s does its level best to induce level disdain with its succession of pupil problems for Chuck to puzzle over. There’s Patsy (Joan Carroll), dumped on the school by single mum Mary (Martha Sleeper), at least until the latter is reunited with musician ex Hoe (William Gargan). There’s a “philosophical” debate about the merits of juniors using physical violence when Eddie (Dick Tyler) turns the other cheek at Mary’s urging and gets a prize pummelling; bizarrely, she then choses to train him at fighting (reading from The Art of Boxing) so he may defend himself in a – what, composed? – fashion. The picture crawls blithely from scene to scene, under the smug illusion – correct, as it turned out – that viewers would just lap this stuff up.

Which, as per Going My Way, may have something to do with the conditions of its production and release (WWII, or in the following months). It seems – as Wiki tells it, anyway – the picture has become something of a Christmas favourite, despite having as limited a Yule setting as the first outing (that one at least ended at Christmas; this one boasts a quite repellent nativity play scene about a third of the way through, after which, all hope of recovery is forfeit). It’s also showing in Bedford Falls in It’s a Wonderful Life (and in The Godfather, Michael and Kay go to see it).

There’s some solid animal acting in the movie’s favour. A superb kitten performance, as it plays in Bing’s hat while the naughty nuns titter amongst themselves (Bing is trying to give a very serious speech). There’s also a yawning dog in a chapel that goes down well (Horace befriends it, entirely reasonably). Ingrid – who like Bing, had won an Oscar the year before – simpers benignly before being packed off with the TB. Bing occasionally looks amused or extra-sincere, and one gets the impression he’s longing for Bob Hope to insult him off camera.

Director Leo McCarey picked up two of his three Oscars the previous year, for writing and directing Going My Way (his first was directing the really very good The Awful Truth). Indeed, nothing he was attached to during the ’40s – including romantic drama An Affair to Remember – is a patch on his output in the previous decade (which included Duck Soup and Ruggles of Red Gap).

Perhaps that’s down to his professed beliefs. He was a devout Catholic – who’d have thunk given these two movies; Bergman’s character is based on his aunt Mary Benedict, who copped it to typhoid – and he became increasingly conservative as the decade progressed. And anti-Commie, with all the propaganda pieces (My Son John) and testifying that entailed. So clearly, he wasn’t one for turning the other cheek. Crosby said McCarey was a fan of improv. That might work when there’s a solid plot as bedrock and/or comedic beats. When you have nothing but positive vibes to impart, though, it can lead to something as stale and uninvolving as The Bells of St. Mary’s. 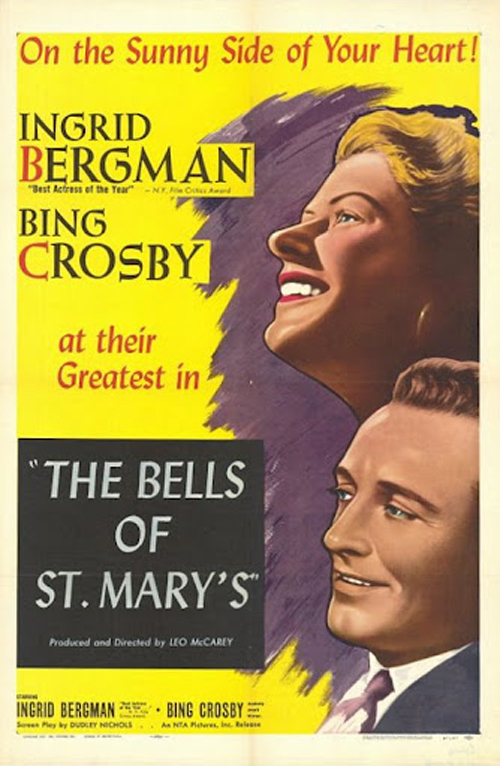