Oh hello, loves, what year is it?

Simu Lui must surely be the least charismatic lead in a major motion picture since… er, Taylor Lautner? He isn’t aggressively bad, like Lautner was/is, but he’s so blank, so nondescript, he makes Marvel’s super-spiffy new superhero Shang-Chi a superplank by osmosis. Just looking at him makes me sleepy, so it’s lucky Akwafina is wired enough for the both of them. At least, until she gets saddled with standard sidekick support heroics and any discernible personality promptly evaporates. And so, Shang-Chi and the Legend of the Ten Rings continues Kevin Feige’s bold journey into wokesense, seemingly at the expense of any interest in dramatically engaging the viewer.

Because the movie is, like Black Widow before it, consummately inessential. The curious thing is, both had a degree of potential, outside of the Marvel homogenising machine. A tale of an MKUltra’d Natasha might have been a prequel worth exploring (not the one we got, clearly). And the mix for Shang-Chi, of a character already aware of, yet unimpressed by and avoiding, the supercharged Marvel milieu sidesteps the usual origin story (barring some undistinguished flashbacks). Yet such is Lui’s pervasive languidity, even when Shaun/Shang reveals his prowess during a bus attack, it could almost be as if he’s just discovering his skills for the first time. There’s no weight to any of it. It’s a rote reveal, and even hyperactive Akwafina (as best pal co-valet – an ideal profession for Liu – Katy) is unable to make it seem either exciting or legit.

Shang-Chi: Even if you could bring her back, what makes you think she’d want anything to do with you?

There was a further good idea here too. Tony Leung, for some reason that’s beyond me, chose this juncture in his long and distinguished career to take the Hollywood plunge, and if the choice does him no favours – you’re inclined to commiserate with Xu Wenwu for his disappointment of a son – the opening encounter with Ying Li (Fala Chen) and their dance of desire/courtship is – alas – as exotic and artistic as the movie will muster.

This is an interesting kernel for a plot, of individuals of opposing morality who are nevertheless drawn inexorably to each other; the villain’s love story might have made a decent movie, but this isn’t that movie (although Disney are ramping up their “sympathy for the devil” pictures, so you never know). Consequently, it’s dealt with as little more than exposition, and Shang-Chi and the Legend of the Ten Rings sorely lacks the spark that might make it seem distinctive or different; Leung and Chen weave a lure entirely absent elsewhere among the cast (a certain returning comic relief aside), so it’s a double blow that the good stuff is out of the way in the first ten minutes.

That might not have been the end of it: “My son is home”, and the uneasy family dynamic, had potential as a Vader-ish generational conflict, yet it’s played out with a despairing lack of tension, conviction, engagement or imagination. Particularly so with the inclusion of de rigueur beats like dad having a last moment bout of feeling for his son (Vader-ish), despite trying to kill him moments before (Vader-ish). Liu brings zero depth to the proceedings, and Leung can’t carry them on his own. Similarly, estranged sister Meng’er Zhang (Xu Xialing) is a personality black hole. Well, aside from being a strong woman who doesn’t need her brother and can whoop his butt. Which goes without saying, even though Shang-Chi is the nominal star of the show, at least until Marvel can replace him perhaps with his sister or maybe-possibly Akwafina.

The picture follows the well-trodden path of a threat/terror unleashed, although this one is slightly abstruse, with its activated pendants and ethereal call of the deceased. This is Marvel following in the Doctor Strange line (Benedict Wong makes a welcome appearance – an entire Wong move would have been far preferable to this weak sauce), such that we get some Harpies-lite off Jason and the Argonauts “stealing souls to feed the Dweller in Darkness”. There’s a large well-rendered dragon on show come the finale, but the big showstopper is otherwise as boring as a dragon’s, or a Morris’s, arse.

The realm of Ta Lo is dampened by dull action in which about ten people line up to face a CGI threat (shades of Wakanda, but even less impressive). In general, there’s some decent choreography poking through, suggesting Destin Daniel Cretton could probably make a decent big budget movie, unfettered by Marvel edicts, although obviously the principle reason for employing him was Disney identity politics (as a director with Asian heritage).

Though, whether that’s what he should want (big budget movies) is a different matter. Short Term 12 was very solid, but his mainstream ascendency (The Shack, Just Mercy) has been considerably less promising. He wisely wasn’t big on going the superhero movie route in the first place, although unwisely swallowed the plankton that he could tell “an authentic story about Asian identity”. If a Marvel movie has ever told any form of authentic story – aside from perhaps Hulk – that would be a first.

Trevor: All this time I thought I was hallucinating.

Michelle Yeoh shows up, inevitably, as does Abomination, less so. Florian Munteanu makes an impression as a one-handed monolith. There are swathes of vaguely plastic countryside from cinematographer William Pope, making you suspect the use of Unreal Engine. Mark Ruffalo and Cretton regular Brie Larson cameo in the credit scene. Bruce Banner desperately needs one of those med beds.

Trevor: That’s a weird horse. What’s it looking at me for?

Then there’s Trevor Slattery (Ben Kingsley – who’s only a few years off eighty, but mercifully significantly less senile than Patrick Stewart). Inevitably, the need to be so tediously literal in explaining Shane Black’s Marvel entry – by far the best of the MCU canon – is slightly exasperating, but of course, there can be no slack granted or inhaling out of turn in the wokesense world. Thus, Trevor’s return is somehow attempting to atone for Iron Man Three’s attempt to atone for the racism of the original comics character, which of course, makes a whole lot of sense. So Slattery has reformed, which means you can like him now legitimately, as long as you make it clear he didn’t do a good thing, and you can just let him off as a loveable rascal. God, it’s tiresome. Isn’t it?

Soo: We’re now in a world where, at any moment, half the world’s population can just disappear. Life’s too short and fragile.

Kingsley’s delivery is spot on as ever, even if the writing of Trevor isn’t nearly as sharp as Black’s. Although, I liked the way one might read that Slattery’s employment as a fake terrorist came via “official” channels: “Anyway, the producer told me he worked for the BBC”. As if the BBC would ever be involved in deceiving whole nations about a global threat. Of course, there are big (global) events in Marvel-verse now, big (global) events that curiously (or not) mirror our world, or will do, if TPTB have their way. Even the final shot is in on that act, with Xialing taking over the Ten Rings, many of her warriors wearing stylish face nappies – the coof is strong in the super-strong. Clearly.

Katy: Oh, the Mega Soul Sucker was such a nasty bitch.

And clearly, Marvel is royally screwed, whatever reprieve No Way Home brings. They’ve gone from world dominating to joke in the space of two years, and the “relative” strength of their performance this year (piffling when Ant-Man is their nearest comparable MCU reference point) has actually fallen thorough the floor. 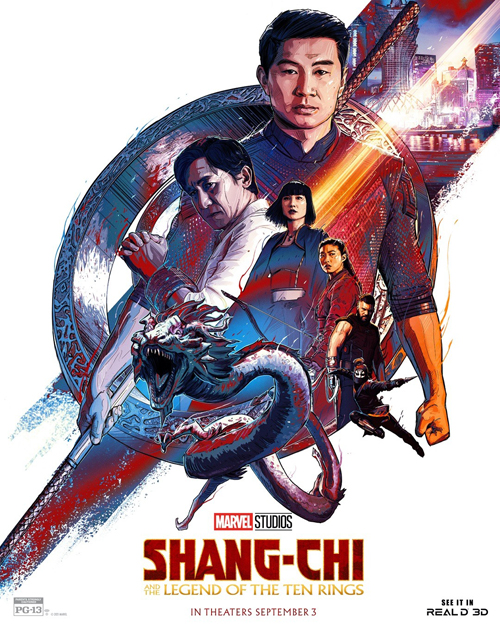